Airguns of the American West Part 10

The Guns of John Wayne 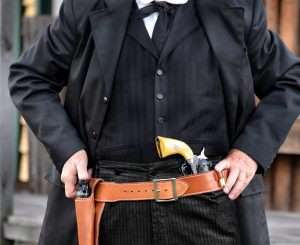 The guns of John Wayne have always helped to define his characters but none so dramatically as the pair of engraved single actions he carried as former lawman and gunfighter John Bernard Books in “The Shootist.” In this memorable image recreated from the movie, the author has stepped in to play Books and a pair of Limited Edition, hand engraved Umarex Colt “Duke” Peacemakers, to fill the role of Wayne’s ivory griped Single Actions.

John Wayne’s film career spanned more than three generations, from 1930 when he starred in his first western, The Big Trail to 1976 when he made his last film, The Shootist. The Western cinematic legacy he left chronicles almost the entire history of this uniquely American film genre and its kinship to the Colt Single Action Army revolver. 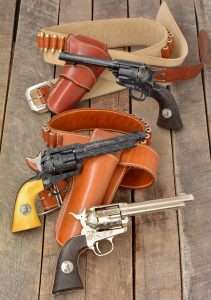 There are 10 John Wayne models available with blued, weathered, or nickel finishes, including four hand engraved models in both .177 caliber BB and .177 caliber (4.5mm) pellet versions. Pictured are the weathered Duke model, (top) with a Bianchi Frontier Gunleather “Duke” holster and two-tone cartridge belt, the Limited Edition Shootist model (center) with a Legends in Leather copy of the gun rig worn by John Wayne in the film, and a Limited Edition hand engraved nickel plated Duke Model.

Up until 1930, the tall, rugged looking man from Winterset, Iowa, had been working as an extra, but he had determination and a look that caught the attention of legendary film director Raoul Walsh in 1929. The next year he gave the young actor named Marion Morrison his first big break in the 1930 epic The Big Trail. Walsh also changed Morrison’s name to John Wayne. Although the film was not a box office smash, even though it was one of the first shot in 70mm wide-screen, Wayne became a “B” movie hit, spending the next nine years making westerns and building a reputation as a film star. Many of his early films were remakes of old Ken Maynard silent movies with Wayne always playing a character named John (John Drury, John Steele, John Mason, John Trent), and riding a magnificent white stallion named, of all things, Duke. read more

Airguns of the American West Part 9 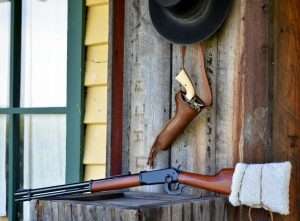 With sheepswool tied around the stock to disguise the black plastic buttplate, and the hood removed from the front sight, the Walther looks very much like an 1894 Winchester. (Shown with a custom holster by Chisholm’s Trail Leather, an Umarex Colt SAA, and a “Bohannon” hat courtesy of Golden Gate Western Wear)

The lever action rifle has its origins in the Horace Smith and Daniel B. Wesson-designed Volcanic rifle, and the short-lived Volcanic Repeating Arms Company, which they sold to Oliver Winchester in April of 1857. They used the money to start S&W in Springfield, Massachusetts, and by the end of the year had introduced America’s first cartridge-loading revolver, the S&W No.1. They had also patented America’s first self-contained metallic cartridge, the .22 short rimfire in 1856, and a year prior, secured the patent rights to the bored through cylinder from inventor Rollin White. Winchester, along with Benjamin Tyler Henry, took Smith and Wesson’s Volcanic rifle design and used it as the foundation for the 1860 Henry rifle. Their new Henry lever action .44 rimfire rifle gained national fame during the Civil War and was carried by former Union and Confederate soldiers, frontiersmen, and lawmen throughout America’s post Civil War Western Expansion. read more

Airguns of the American West Part 8

So, you hate the finish on the standard Schofield airgun?

Here are the finishing touches to an authentic looking antiqued version 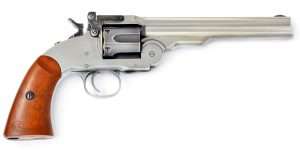 Is it a real vintage Schofield? Nope, this is the Bear River model with the charcoal black finish polished off and parts of the gun faux color cased and blued to match an original Schofield.

It’s later on the second day and I am starting with the gun as completely polished out as possible. You could stop here, but since I have an original photo of a nickel plated civilian model, I know there is more that can be done to make the Schofield airgun more authentic in appearance.

It is necessary to polish out the entire gun, even parts that are not supposed to be polished, because they will have the wrong finish if left in charcoal black. This includes the top latch, which is one of the trickiest parts to polish, as well as color caseharden. Did I say color caseharden? Well, not really. If you actually had the equipment to do it, it wouldn’t work; just like Parkerizing, it’s not applicable to aluminum alloy. (The temperatures necessary for bone charcoal color case hardening also exceed the melting point for the cast aluminum alloy used in airguns.) But one of the many little tricks I learned antiquing black powder guns was how to create a faux color casehardened look on steel, that also just happens to also work on aluminum alloy! And it doesn’t require anything other than cold blue and gun oil mixed in the correct proportions. read more

Airguns of the American West Part 7

So, you hate the finish on the standard Schofield airgun?

Here’s how to make your own antiqued model like the author’s. 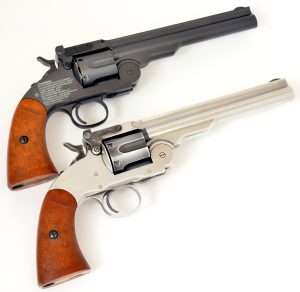 The standard Schofield airgun has a slightly reflective charcoal gray finish that’s far more modern than the gun’s 1870’s design. Bear River also has a nickel version, but the gun pictured above is not nickel, it’s a polished out standard model with a few features that are more akin to the original civilian model Schofields. Also, note the lengthy manufacturer’s info on the right side of the frame. This is also polished off with the finish.

Like many Western airgun enthusiasts, I was thrilled to see a Schofield model introduced this year. When I received the first one I was immediately taken with the accuracy of the gun to an original. I made comparisons, and the job done by Bear River is exemplary. And I see no reason why they had to opt for an incorrect finish on what was a remarkably close copy (save for the manual safety behind the hammer) of the S&W Schofield military revolver. Finish aside, it feels very much like a real Schofield in the hand; the hammer and trigger pull are close, the grip design excellent. The top latch is a little light on resistance and you can inadvertently open the gun if you over reach when cocking the hammer (harmless but embarrassing), and the shortened travel of the extractor is a good choice to prevent those re-loadable BB cartridges from flying out. It is a job well done. And Bear River quickly came to market with a nickel plated version for those who found the charcoal black finish unappealing. But for those of us who already have the charcoal black guns, and a couple of days to devote to refinishing it, you can make it into an even more authentic looking gun than the nickel version, just like the example pictured above! read more

Airguns of the American West Part 6

As close as it gets to the real thing! 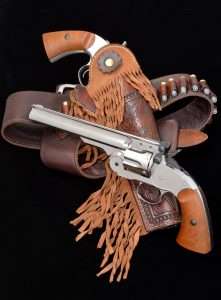 The S&W topbreak revolvers, including civilian models of the Schofield, found their way into the holsters of lawmen, such as Virgil Earp and Dallas Stoudenmire, cowboys and cattlemen, as well as notorious outlaws like John Wesley Hardin and Jesse James. The nickel plated Bear River Schofield is an extremely accurate copy of the famed S&W .45 Schofield Model. (Holster by .45Maker, cartridge belt by John Bianchi Frontier Gunleather)

The .177 caliber Schofield revolver is a page right out of Western history, the gun that beat Colt’s to market with the first larger caliber single action cartridge loading revolver, and in 1870 got the bulge on Colt’s with the first U.S. Cavalry orders for a new post Civil War handgun. The topbreak S&W Schofield and No. 3 American models may not have been as famous as the Colt Peacemaker, but they certainly wrote themselves a chapter in the story of the American West. The new .177 caliber Schofield models bring that same heritage to the Western airgun market with two well built and accurate six-shooters. read more

Airguns of the American West Part 5 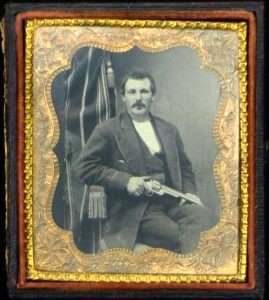 By the early 1870s S&W had become the first American armsmaker to offer a large caliber, cartridge-loading revolver. This S&W Second Model American with nickel plated finish and 8-inch barrel is pictured in this daguerreotype portrait of a man holding a nickel plated S&W American. (Mike Clark Collection/Collectors Firearms)

By 1870, the self contained metallic cartridge introduced by S&W, had grown up from an anemic 7-shot .22 Short pocket pistol in 1857, to the man-stopping .44 caliber top break revolver. And S&W beat Colt’s to the draw by almost two years, introducing America’s first large caliber cartridge revolver in 1870, the .44 caliber S&W Model 3 American.

S&W’s control and enforcement of the Rollin White patent for the bored through cylinder, which they purchased in 1855, prevented Colt’s or any American arms maker from producing a breech-loading cartridge revolver until 1869, by which time S&W had established itself as the leading manufacturer of cartridge-firing arms in the U.S. read more

Airguns of the American West Part 4 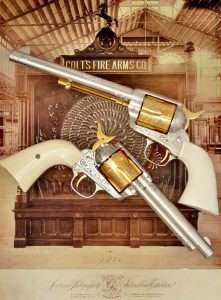 Set atop a print of the 1876 Colt Centennial Exposition display cabinet, the Adams & Adams hand engraved copy of the L.D. Nimschke .45 Colt 7-1/2 inch Peacemaker and the new hand engraved Umarex Colt 5-1/2 inch .177 caliber Peacemaker shows how realistic the air pistols can be made to look.

As far back as the late 1580s firearms were being embellished by the engraver’s hand. Wheelock pistols and muskets were among the very first, each unique to the craftsman who engraved them. But by the mid to late 1600s engravers were beginning to record their work in pattern books. As noted by historian R.L. Wilson in Steel Canvas, “In 1684 French engraver Claude Simonin published a book of his engraving patterns comprised of designs that could be adapted to deluxe flintlock firearms, thus allowing engravers the advantage of sources to copy.” The pattern books of 19th century engravers, particularly the works of Gustave Young and Louis Daniel Nimschke and their work on Colt revolvers, have long been the source of designs for 20th and 21st century engravers, as have the guns themselves. read more