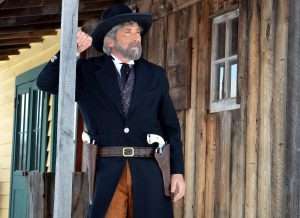 One gun or two, that was a decision a lot of lawmen made in the 1870s and 1880s, usually it was two, one with a shorter barrel, but occasionally, it was a pair of long barreled six-shooters. In this case a mix of Colt Peacemaker and Schofield. (Custom holsters by TrailRider Products)

While most men preferred, or could only afford to carry one handgun or rifle, others chose to wear a brace of pistols around their waist. Outlaw Jesse James famously wore a pair of S&W single action topbreaks, while his brother Frank preferred two 1875 Remington .44-40s. Legendary pistolero and lawman James Butler “Wild Bill” Hickok always sported a pair of 1851 Colt Navy models around his waist, (though he also owned an 1860 Army .44 Colt cartridge conversion and an S&W Model No.2 Army .32 rimfire pistol); El Paso, Texas lawman and Deputy U.S. Marshal Dallas Stoudenmire was another shootist who preferred a brace of six-guns, he favored a .44 S&W Model 3 American topbreak and a Colt Richards-Mason .44 centerfire conversion, with the barrel cut down to 2-5/8 inches. He carried the latter in his left front pocket butt forward. read more 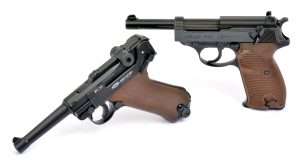 The Umarex Walther P.38 (right) and Gletcher (and Umarex) P.08 Parabellum are nearly identical in overall design, dimensions and operation to the original 9mm pistols.

Between the Walther P.38 and Luger P.08 we have two preeminent German handgun designs; two very different approaches to a 9mm military sidearm, nearly half a century apart from each other and  built by two of the most famous armsmakers of all time. Packing all that history into a pair of CO2- powered, .177 caliber blowback action handguns is a tall order, but Umarex and Gletcher have managed to do exceptional work on each design. read more 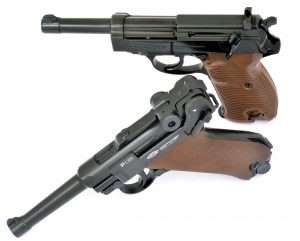 Famous for design and innovation, two of the most easily recognized handguns in the world, the Luger P.08 design has been around for more than a century, and the Walther P.38 remains one of the greatest handguns of all time, still relevant as a defensive sidearm 79 years after it was introduced. Both guns are also made today in .177 caliber blowback action models.

It is a foregone conclusion which handgun was the greatest American semiautomatic pistol of WWII, not quite so easy on the European front where Germany had two very successful and popular sidearms at their disposal, one, like America’s Colt Model 1911A1 came from an earlier era and had already proven its mettle under fire in WWI. This was the famous Luger Parabellum introduced in 1900; the P.08 version (without the grip safety) was introduced in 1908. read more

A 1911A1 to honor Wayne’s most memorable WWII films 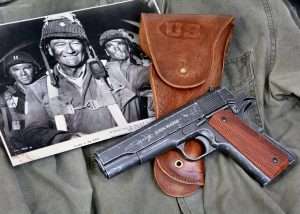 The new John Wayne Model 1911A1 is the first John Wayne semi-auto in the series of John Wayne commemorative airguns. (Shown with a publicity photo of Wayne in The Longest Day, and a copy of a WWII era JT&L Model 1942 holster from World War Supply).

John Wayne’s cinematic legacy is “The Great American Western” but The Duke also left an unforgettable mark across film history with a handful of outstanding dramatic, and occasionally comedic films, along with a list of memorable war films during his 46 year career. He made 140 motion pictures from 1930’s The Big Trail to The Shootist in 1976 and this included more than a dozen war pictures, all of which were WWII films except for 1968’s The Green Berets. Among his most famous were The Sands of Iwo Jima in 1949 and The Longest Day in 1962. The Colt Government Model 1911A1 was a part of those films and that great era in American history. read more

Can accuracy be maintained? 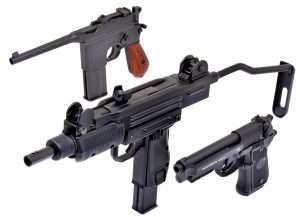 Fully automatic handguns, rifles, machineguns and machine pistols were designed for a specific reason, saturation firing. From the 19th century Gatling gun to John M. Browning’s legendary BAR, the Broomhandle Mauser Model of 1932, Colt M16, and the famous Israeli Uzi, the use of full auto has been intended to give the user a tactical advantage. But what good is that advantage if you can’t hit anything (accurately) with the gun?

Anyone who has ever fired an automatic weapon, whether an M16 (my first experience in basic training a very long time ago), an Uzi or other selective fire weapon never forgets the first time. I was told by the drill sergeant to “…squeeze off a few rounds,” and I did, about 30 of them….to which he responded, “son, (in a voice very much like R. Lee Ermey, “you’ve been watching too many John Wayne movies.” I learned how to feather the trigger, get a firm hold and maintain my sight picture. But accuracy was never as simple as all that when the selector switch was rotated. This was true the first time I fired an Uzi pistol and several other full auto weapons during visits to arms manufacturers over the years. The real takeaway was not learning to fire hell bent on emptying the magazine (you have to do that at least once) but using the firearm’s sustained fire capability to its best advantage, which is generally close quarters under fire or to suppress enemy fire. read more 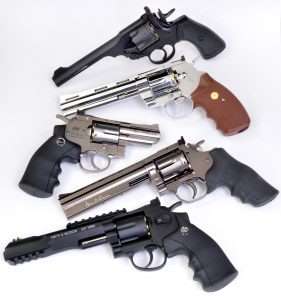 Here again are the candidates for best double action trigger. From top to bottom, the Webley MKVI, Umarex Colt Python, ASG Dan Wesson 2-1/2 inch barrel model, Dan Wesson Model 715 6-inch and Umarex S&W 327 TRR8. They all have excellent features but only one has “the best” trigger for double action firing.

The one thing that New York armsmaker Eben T. Starr did with his 1858 double action pistol design, was engineer a trigger (or trigger lifter in this case) to “stage” the trigger for the final pull-through. What I mean by that is the trigger pull rotated the cylinder into battery and cocked the hammer but left a little additional pull before the trigger lifter struck the hammer release. This allowed a soldier to take better aim before firing. This same step in the trigger pull was repeated by Colt’s in their 1877 and 1878 double action designs, and has been used to great effect by S&W in their revolvers, which stage the hammers with relative ease. Most shooters pull straight through on double action, as it should be in combat, but for greater accuracy, or a studied and practiced pause before dropping the hammer, this aspect of double action revolvers has become a trait of the best guns and best triggers. It is also so with the best double action CO2 revolvers. read more 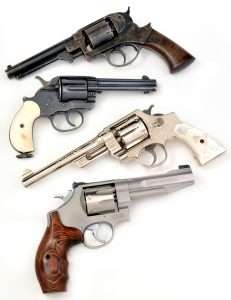 A sweep through double action history from the c.1858 Starr carried by Union Soldiers during the Civil War, to the famous .45 Colt Model 1878 double action/single action, the S&W Triple Lock with swing out cylinder, and a modern S&W Performance Center 8-shot .357 Magnum (the basis for the 327 TRR8).

Trigger control is one of the essential skills in target, competition and self defense shooting. With cartridge-firing revolvers and semiautomatic pistols trigger design and ease of operation is often one of the selling points. The fundamentals of trigger design, both in operation and levels of resistance, (stacking, travel, over travel, and reset), as well as quality, apply equally to air pistols that are based on actual handguns. Semi-autos are much easier to match for design, function, and resistance to cartridge-firing models, as evidenced by airguns like the S&W M&P40, Beretta 92A1, Sig Sauer P226 X-Five, and Tanfoglio Witness Gold Custom. When it comes to double action revolvers it is almost the same, but not exactly. The demands placed upon the trigger in a DA/SA airgun are not equal to those of a cartridge-firing model. There is less mass (a lighter weight alloy cylinder), a lighter hammer spring, and of course, the hammer itself is light weight alloy construction, not steel. The double action function on some CO2 revolvers can feel sloppy and trigger pull can vary from heavy, with excessive stacking on some, to light, smooth actions that run like a tuned revolver (from the S&W Performance Center, as an example). This is evident in a handful of CO2-powered, BB or pellet cartridge loading revolvers. read more