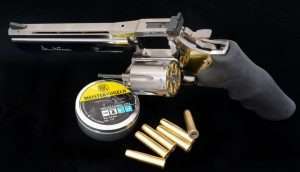 I have to admit to a certain degree of disappointment with Tuesday’s test of front and rear loading pellet firing cartridges. The difference in both velocity and accuracy were greater than I expected. Was it the gun, the CO2, or just that there is that great a difference between the two types of pellet loading shells? To get another answer I have changed guns to the ASG Dan Wesson Model 715 with 6-inch barrel and the two types of ASG Dan Wesson pellet loading cartridges. The longer barrel should help bring the pellets up to factory spec which is 410 fps. Today’s ambient temperature is 60 degrees, sunny and light wind. The Meisterkugeln 7.0 gr. Professional Line wadcutters will be chronographed the same way with two sets of six rounds for each cartridge type and an overall average velocity. The test will also be shot at 21 feet, which is close for a 6-inch rifled barrel revolver; this is a solid 10 meter gun, but the idea is consistent accuracy. So, one more time down the rabbit hole. read more 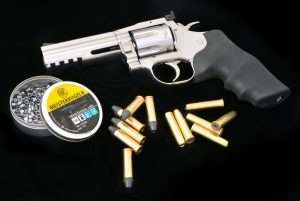 The question keeps coming up, is a front loading pellet firing cartridge better than a rear loading shell? I have proposed that the latter produces higher velocity at the muzzle and slightly greater accuracy because the air gets immediately behind the pellet at the moment of discharge, rather than traveling the length of the pellet shell (and thus beginning to expand within the larger circumference of the shell) before it hits the skirt of the pellet to drive it down the barrel. This is, at best, an incrementally small variance, and can only be proven by comparing two different types of pellet loading shells in the same revolver. The question originally came up regarding the recent comparisons between the 7-1/2 inch Colt Peacemaker with rifled barrel vs. the smoothbore pellet-firing Crosman Remington Model 1875. The Remington came in a close second for accuracy behind the Colt. But since both CO2 revolvers use rear-loading pellet firing cartridges, there is no way to use either for testing the front vs. rear loading cartridge theory. I did, however, have one CO2 revolver on hand that can fire either type of cartridge, the ASG Dan Wesson Model 715, which is available with front loading pellet firing cartridges and can also use ASG rear loading cartridges. To test the theory I am using the new rifled barrel 4-inch Dan Wesson Model 715. read more

Downrange with the Heckler & Koch airgun 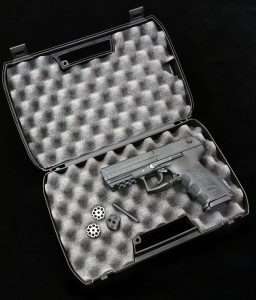 A little more expensive than some CO2 semi-auto models, the dual firing system (rotary pellet and combined CO2 BB magazine) make the Umarex H&K P30 a double threat for accuracy and training. The double action trigger pull on the HK P30 airgun is 11 pounds, 10.5 ounces average. Single action, the trigger pull drops to a refined 5 pounds, 2.5 ounces average. The 9mm models average 5 pounds, 8 ounces single action and 11 pounds, 4 ounces double action, so the airgun’s trigger is nicely matched with only 0.375 inches of travel fired single action, a crisp break and minimal over travel. The latter is irrelevant since you have to manually cock the hammer again before you can shoot single action, although with a two-handed hold you can cock the hammer with the support hand thumb pretty quickly. Either way, this is an easy pistol to handle. read more 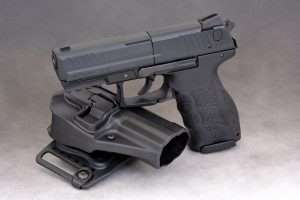 For proficiency training or to get a feel for handling the 9mm model, The Umarex HK P30 CO2 powered version delivers outstanding performance with a 3.35 inch rifled steel barrel. The airgun also fits holsters made for the 9mm P30 like this Blackhawk SERPA Autolock.

Heckler & Koch has always catered to a variety of end users from civilians to military and law enforcement by tailoring certain models in multiple variants, like its P30 Series which is offered in V1, V2 and V3 configurations. Adding to that selection is the new H&K licensed Umarex HK P30 CO2 model. This latest 4.5mm pellet firing semi-auto has its roots firmly planted in the first Umarex 4.5mm CO2 pistol to be adopted as a training gun, the Walther CP99. The HK model is quite a bit more advanced in its design, finish, and operating features, but at its core is the same superbly engineered internal mechanism that has made the CP99 a success for more than 16 years. read more 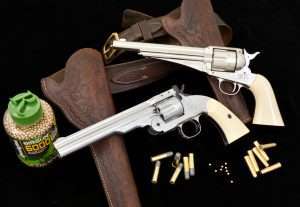 To wrap up this latest series on Western Airguns, it’s time to level the last playing field, and pit the new Crosman Remington Model 1875 and Bear River Schofield CO2 revolvers against each other; the number two and number three guns from the last test each shooting .177 caliber steel BBs. Since the Remington could shoot 4.5mm lead pellets as well, it was compared against the 7-1/2 inch Umarex Colt pellet model. The Schofield came up a distant third for accuracy with only BBs to send down range, however, the Remington is a dual cartridge pistol and fires either BB or pellet loading cartridges. Using the same cartridge design (but not same cartridge) as the Umarex Colt Peacemakers, either type of Remington round loads at the back of the cartridge, and Crosman is diligent in clearly marking the rims of the two different cartridges so there is no mistake in loading. Since both the Remington and Schofield have smoothbore barrels, the test distance will be shortened to 21 feet using the same style B-27 silhouette targets as the previous Colt, vs. Schofield vs. Remington test. read more

The Shootout – Colt vs. Schofield, vs. Remington 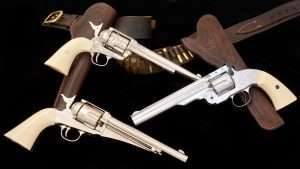 The three most famous handguns of the American West have finally been produced in CO2 versions. This completes a circle of legendary Western arms that begs to be tested as they were back in the day, the Colt Peacemaker vs. the Schofield, vs. the new kid on the block, the Remington Model 1875.

Three famous American handguns from the 1870s, all with history, famous and infamous owners, and all almost perfectly reproduced as .177 caliber CO2 BB and pellet cartridge loading revolvers. Just as it was back in the days of Buffalo Bill Cody, Texas Jack and Frank James, these legendary revolvers all had advantages and failings and all of them have been faithfully copied in these CO2 models by Umarex, Bear River, and Crosman. The Umarex Colt Peacemaker has a solid advantage with its rifled barrel. The Schofield and 1875 Remington both have smoothbore barrels, but can shoot 4.5mm lead pellets as well as .177 caliber steel BBs with different cartridges. All three have comparable barrel lengths (externally) and come relatively close with their internal barrel lengths, 6.75 inches for the Peacemaker (measured from the front of the cylinder to the recessed 4.5mm muzzle), 6-1/2 inches for the Schofield, and 6-3/4 inches for the 1875 Remington. read more 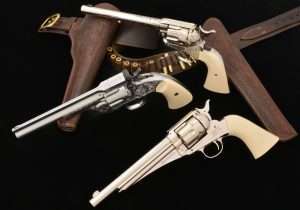 Crosman Remington Model 1875 Part 1
Crosman Remington Model 1875 Part 3
Colt built more Peacemakers between 1873 and 1879 than all the Remington Model 1875, 1888, and 1890 Single Actions combined. Even the S&W Schofield and all of the Model No. 3 Americans, Russians, and New Model No. 3 Single Actions produced from 1872 to 1912 take a far backseat to the Peacemaker for production. However, it was the 1875 Remington that maintained the company’s presence in the large caliber single action revolver market throughout the 1870s and 1880s. It seems only just that of the three CO2 powered Western revolvers available today that the 1875 Remington should be among them. Even coming in third in the Old West, when there were many choices and not too much money to be spent on a pistol, says something about the prestige of carrying a Remington. It was tough to beat Colt’s “Old Reliable” when deciding on the purchase of a new gun. You can say the same thing today of the Peacemaker, Schofield and Model 1875 Remington, when choosing among these three excellent CO2 BB and pellet cartridge-firing revolvers. read more