What are we looking for in a blowback action CO2 pistol? 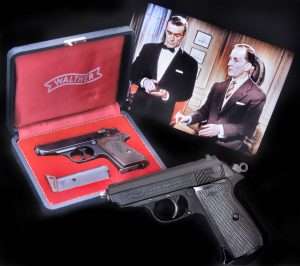 This article is more of an open forum for debate than it is about any one specific airgun model. The development of new blowback action air pistol designs over the past several years has almost kept pace with centerfire and rimfire semiautomatic handguns, and in most cases, model for model, leading air gun enthusiasts down a very interesting path, yours truly included. 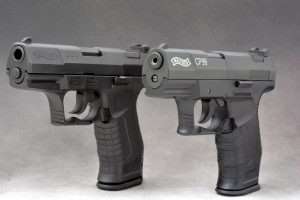 A little over 17 years ago the groundbreaking Walther CP99 (right) took the CP88 concept one step further with a P99-based polymer frame. The 8-shot, 4.5mm pellet firing, non-blowback action, striker fired air pistol became a training gun for German police using the P99. The concept of learning basic skills and firing without the cost of live ammo (9mm) made the CP99 one of the world’s most popular 12 gr. CO2 pistols. The PPK/S, however, remained the only blowback action CO2 pistol for many years.

When I began writing about air pistols I was already involved with cartridge-firing handguns and, by the nature of my work, reviewing new makes and models for Guns & Ammo, American Rifleman, Combat Handguns, Guns & Weapons for Law Enforcement, Pocket Pistols, and Guns of the Old West, I had access to the very latest firearms. read more 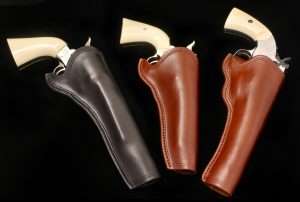 This trio of new holsters for CO2 Single Action Colts, Schofields and Remingtons follow the lines of classic Western styles developed throughout the 1870s and 1880s. Many of these slim, contoured rigs were wet formed for specific pistols to ensure solid retention, and ease of draw and re-holstering. These three new historically-based holsters are for the Umarex Colt Peacemakers and the 1875 Remington (left in Gunfighter black with the Remington and center in Cowboy brown with a 5-1/2 inch Peacemaker), and far right for Bear River Schofield models. The 1875 and 7-1/2 inch Peacemakers use the same holster.

Quality gunleather is not hard to come by; you just need to throw down some serious cash for an authentic holster and cartridge belt. In Cowboy Action Shooting a good gun rig is just as important as a good gun. This was also true back in the Old West among professional gunfighters and lawmen, as well as outlaws like Jesse and Frank James, the Dalton Brothers, Billy the Kid, and others who lived and died by the gun. With the latest CO2 powered Colt Peacemaker 5-1/2 inch and 7-1/2 inch Single Action revolvers, the Schofield, and 1875 Remington, high quality holsters make the shooting experience all the more realistic and enjoyable. But they often come at a high price. Shortly, there will be an entire line of high-quality American made leather holsters and cartridge belts designed especially for the Colt, Schofield, and Remington CO2 models that will be comparably priced to the airguns, so that anyone can have a period correct gun rig that will not only improve their Cowboy look, but their shooting skills when it comes to skinning that smokewagon. read more 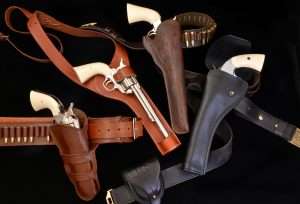 Holster designs from the 1880s and 1890s include a Mexican double drop loop (left) with a 5-1/2 inch Umarex Colt Peacemaker. The design is based on the holster worn by Billy the Kid. Next, an El Paso Saddlery Tombstone Speed Rig, with 7-1/2 inch Umarex Colt Peacemaker. This design is also known as Skeleton Shoulder Holster and was originally designed in the late 1890s by Al. Furstnow of Miles City, Montana. At center is a hand carved Slim Jim style holstering a Crosman Remington Model 1875. This is similar to the style of holster worn by Jesse James, and is made today by TrailRider Products in Colorado. At right a Schofield military flap holster of 1872 design. This model is handcrafted today by John Bianchi Frontier Gunleather.

Over the past two years a great deal of thought has gone into creating authentic CO2 reproductions of Colt, Smith & Wesson, and Remington revolvers, even special hand engraved models duplicating the original patterns used in the 1870s and 1880s. These high quality Colt, Schofield and Remington airguns deserve to be worn in proper western gunleather, the problem is that authentic western holsters and cartridge belts usually cost more than the airguns they hold (with the exception of the hand engraved guns, but it can still be close!) read more

Learning the ways of subcompact carry 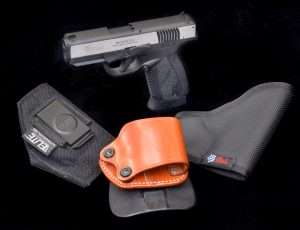 The ASG Bersa BP9cc is an ideal gun for CCW training. Though larger than most subcompacts used for concealed carry, the majority of compact 9mm handguns are the approximate size of the Bersa BP9cc. The airgun is pictured with an Elite Survival Systems ballistic nylon belt clip holster (left) a Galco Yaqui paddle holster (center) and a DeSantis Nemesis pocket holster. All three are designed for compact semi-autos of approximate size to the Bersa.

While I prefer a CO2 training gun that is 100 percent correct to its cartridge-firing counterpart, like the Umarex S&W M&P40, the ASG Bersa BP9cc hits on so many important points that the magazine design almost becomes a secondary issue. What I like most about this particular airgun is the actual pistol it is based upon, a compact 9mm semi-auto that is just a little shorter in overall length than a Glock 19. It has the same simplicity of operation and many of the same fundamental features. The Bersa BPcc models remain slightly above the entry level pricing for a 9mm (.380 and .40 S&W) pistol, as does the price for the ASG CO2 model. Since the .177 caliber pistol uses an internal striker and has the same weight and basic handling of the cartridge models it offers a great opportunity to test the waters for a centerfire model and also work on trigger control, sighting, and most importantly for a compact pistol, determining the best means of carry for the gun. Aside from the cost of holsters, under $100 gets you started with the BP9cc airgun. read more

Learning the ways of subcompact carry 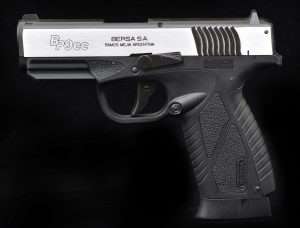 Since 1959 Bersa has been manufacturing well-built, affordable semi-auto pistols in Ramos Mejia, Argentina, and their first polymer-framed, striker-fired model, the BP9cc is available as a .177 caliber blowback action CO2 model. The ASG Bersa BP9cc has exceptional attention to detail and polished slide used on the 9mm duotone pistol.

Back in the 1980s I owned a Bersa .380 ACP semi-auto, it wasn’t a Walther PPK but it looked a lot like one and that was its biggest attraction. Bersa started out in the late 1950s building .22 caliber semi-autos and over the decades worked its way up to larger calibers. Their early guns all had a passing resemblance to either Walther or Beretta models, and not surprisingly, the company’s founders, Benso Bonadimani, Ercole Montini and Savino Caselli were Italian firearms engineers who immigrated to Argentina in the 1950s and established Bersa in the city of Ramos Mejia, the name you see on the slide of every Bersa model. Their first .22 LR semi-auto pistol was introduced in 1959. More than half a century later Bersa is an established manufacturer of well built but still affordable pistols. The company offers a complete line of .22LR, .380, 9mm and .40 S&W semi-autos (some that still look like a Walther PPK or PPK/S) and others, like the BP9cc, with a passing resemblance to a Glock. It is, however, its own unique design. BP9cc stands for Bersa Polymer 9mm Concealed Carry. Introduced in 2010, the 9mm semi-auto was the company’s first polymer-framed, striker-fired pistol, so for Bersa this is a groundbreaking design. read more 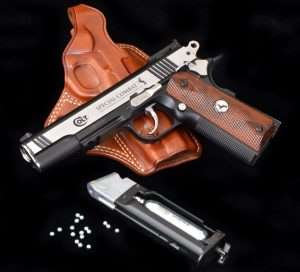 If looks alone can sell a CO2 BB gun, the Umarex Special Combat sells itself. It is, unfortunately, a non-blowback 1911 semi-auto (not a terrible thing really), but also uses an older-type CO2 BB magazine with an exposed seating screw. The magazine’s capacity is 19 shots and is very easy to load with a locking follower and good sized loading port. The gun’s star attractions are an LPA-type fully adjustable rear sight and use of a DA/SA trigger design. With the hammer manually cocked for each shot, the gun is capable of consistent accuracy with an average trigger pull of 3 pounds, 11.5 ounces. Fired double action, trigger pull averages a moderate 8 pounds, 8 ounces.

The Umarex Colt Special Combat Classic, with its unusual DA/SA trigger design, actually has some basis in Colt history, although not as an actual production gun, but rather one originally developed back in the 1960s and later used for the U.S. military trials in the 1970s and early 1980s (the Joint Service Small Arms Program or JSSAP), when a replacement for the Model 1911A1 was being considered. It was called the Colt SSP, a 1911-style 9mm pistol intended to update the John M. Browning design. It was more of a hybrid combining design elements of the 1911, Browning Hi-Power and Sig P210, to create a 1911-style semi-auto with a higher capacity and double action/single action trigger system; essentially what Beretta had with the  Model 92FS, which was eventually chosen to replace the M1911 in 1985. Unlike today when almost every unsuccessful military trial gun becomes a new, high-tech civilian model, back in 1985 when the Colt SSP failed to win the military contract, the design was shelved and never put into production. In that respect, the Special Combat Classic offers a small part of that design with its DA/SA trigger. But even as a CO2 model, the idea is not fully executed. read more

An airgun with dual personalities 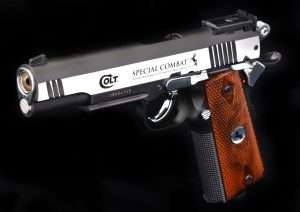 What could be the best looking CO2 powered 1911 air pistol there is, the Umarex Colt Special Combat Classic is an interesting combination of features that make it unique among 1911 models. The polished slide bears the Colt logo and Rampant Colt emblem.

What would happen if Colt and Para USA got together and designed a Model 1911? It would certainly look like a custom-built gun, and if Para’s designers had their way it would have their famous LDA (Light Double Action) trigger, something Colt has never adapted to their 1911 semi-auto designs…until now. However, the only way to experience a Colt branded Model 1911 with a DA/SA trigger system is to try it in .177 caliber with the Umarex Colt Special Combat Classic. read more