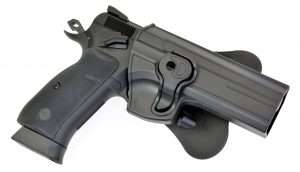 The CZ-75 SP-01 is a robust pistol with a redistributed weight and balance different from the original CZ-75 model. The SP-01 design offers faster handling with its large ambidextrous thumb safeties, larger slide release and easier to activate left-side magazine release. The integrated 1913 Picatinny accessory rail changes the balance of the gun in the hand (this is more beneficial with the 9mm model for recoil) but still offers the same overall advantage of the well established CZ-75 design; a heavily buttressed triggerguard and large, hand-filling grips, shallow slide, well styled sights (improved with the red fiber optic front on the Shadow) and a low bore axis. The SP-01 Shadow .177 caliber BB model is ideal for defensive pistol skill development and pistol training right down to its 9mm sized drop free self-contained CO2 BB magazine. In comparison, the air pistol vs. the 9mm SP-01 semi-auto, comes in with one less round capacity (18 in 9mm, 17 in .177 caliber), both have metal frames, rubberized grips, a DA/SA trigger system, similarly designed sights, barrel lengths (the 9mm barrel is 4.6 inches, the .177 smoothbore barrel 4.25 inches) and so close in overall weight and dimensions that the air pistol works with the same holsters as the centerfire model. read more

The CZ-75 line begins with the original 9mm model (top left) in 1975 and advances through a number of design improvements including the SP-01 Shadow (top center) and the Shadow II Target (top right). The ASG CZ-75 blowback action line (bottom left) duplicates the 1975 model combined with elements of the SP-01 while the 2018 SP-01 Shadow (bottom center and far right) takes elements from both the Shadow and Shadow II with the updated frame incorporating a 1913 Picatinny dustcover accessory rail, sights from the original Shadow, rubberized SP-01 grips, and the larger ambidextrous thumb safeties and slide release.

ASG has done an exceptional job of creating blowback action CO2 models based on the CZ-75 design that not only live up to the CZ name but raise the bar for air pistols with authentic details and accuracy to centerfire pistol dimensions, weight, balance in the hand, and functional features. The all-metal CZ-75 and new SP-01 Shadow are nearly perfect reproductions of their centerfire counterparts from external design to field stripping and basic internal operation. This is everything you want in a CO2-powered blowback action BB pistol. read more 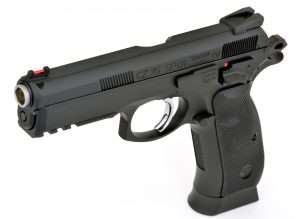 The first new gun of 2018 to appear in Airgun Experience is the much anticipated ASG CZ-75 SP-01 Shadow. This new blowback action model is based on the earlier CZ-75 CO2 model but fully upgraded to combine features from the CZ-75 Shadow and 2018 CZ-75 Shadow II.

No modern handguns have seen more variations from more manufacturers than the Colt Model 1911 and CZ-75, two truly distinctive designs that, no matter whose name is on the frame or slide, still look and function pretty much like the originals. Over the years Colt has made many variations of the original 1911 patented design, and so has Česká zbrojovka to its original 1975 CZ-75 platform. 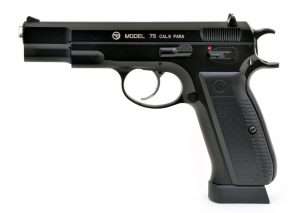 For blowback action CO2 models this is where it began in 2015 with the ASG CZ-75, a mix of the original style CZ-75 with rounded triggerguard, long spur hammer, and single thumb safety paired with the later CZ-75 SP-01 extended capacity magazine with deeper base pad. The blowback action model with self-contained 17-round CO2 BB magazine was an instant winner with CO2 semi-auto enthusiasts.

In the remarkably short time since its introduction the CZ-75 design has been duplicated by more than 20 international armsmakers including IMI’s Baby Desert Eagle and Jericho, Italian armsmaker Tanfoglio’s Limited Custom and Gold Custom, the EAA (European American Armory) Witness series and multiple models sold under the TriStar Arms name. There is the Turkish-built Canik TP 9V2, and one of the more expensive CZ-75 variations in the world, the precision-built Swiss Sphinx SDP. ASG’s .177 caliber blowback action CZ-75 is also licensed by Česká zbrojovka, so the company has all the bases covered from airguns for plinking and handgun training to multiple caliber centerfire models for police, military and competition shooting. In USPSA Production Division, CZ pistols are now used by twice as many top-level competitors as any other maker. read more 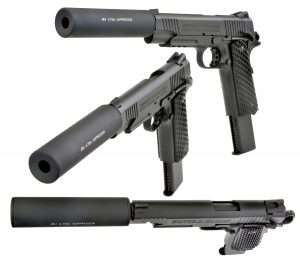 The Swiss Arms 1911 TRS with the JBU faux suppressor and Tanfoglio/Swiss Arms 27-round extended capacity magazine make a formidable combination both visually and in performance. While the faux suppressor does nothing to reduce the medium/high db level of the TRS, the airgun sounds similar to an actual suppressed .45 ACP when fired.

The Swiss Arms TRS, with all the accessories shown, is an exceptional CO2 model given that the retail price is still below $200. The JBU faux suppressor is also sold separately, for those who already have the TRS or other models with a 14mm threaded barrel. It retails for $39.95. This is the most realistic looking of the current faux suppressors available for CO2 air pistols.

The threaded adapter (that comes with the Swiss Arms 1911 Tactical kit) is designed to screw into the larger diameter JBU faux suppressor and step it down to the 14mm threaded adapter that fits into the Swiss Arms barrel. This adapter will also mount the JBU to all Swiss Arms 1911 models with threaded barrels. (The adapter fits other CO2 models with 14mm threaded barrels, but you cannot use it on models that have true locked-breech designs with guide rods, like the latest Sig Sauer P226 X-Five silver. The guide rod extends beyond the barrel when the slide retracts, and it will hit the back of the suppressor. Thus you need to be absolutely certain the slide can retract after fitting the JBU on a blowback action model to prevent damaging the barrel, guide rod, suppressor and slide.) There is also a process for mounting the JBU on threaded barrels. The adapter threads into the JBU counter clockwise and you need to make sure it is tight. The faux suppressor then threads into the barrel clockwise, but you need to be certain not to turn it too tight or the adapter will begin to unscrew from the back of the JBU. read more

This is about as close to a realistically-sized, suppressor-equipped Model 1911 as you can get in a blowback action CO2 pistol. The Swiss Arms Tactical Rail System (TRS) pistol closely resembles the .45 ACP Colt Combat Unit Rail Gun in finish and features. The air pistols threaded barrel also makes it possible to equip it with the JBU faux suppressor. The finishing touch is the Tanfoglio extended capacity 27-round magazine which also works with Swiss Arms models.

When it comes to accessorizing a blowback action Model 1911 CO2 pistol, the Swiss Arms TRS (Tactical Rail System) pistol has the two most desirable add-on features, a JBU threaded faux suppressor and a 27-round extended capacity long magazine. In the “looks” department, a 1911 just doesn’t get any better, and there are actual .45 ACP, 9x19mm, .38 Super and 10mm models in existence that have been similarly equipped, so this CO2 model is not an exaggeration. 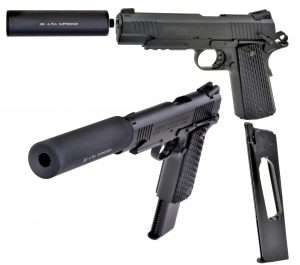 Think of this as a “kit” gun. You can buy the TRS by itself or as a Blowback Kit from Pyramyd Air, which includes the JBU threaded faux suppressor. The Tanfoglio extended capacity magazine is sold separately. Put them all together and you have one very remarkable looking CO2 pistol.

The success of dustcover rail-equipped 1911s has become almost standardized as a model variation for U.S. and foreign manufacturers of the Colt M1911 and M1911A1 platform. The Colt 1911A1 Rail Gun, a 21st century tactical version of the most successful semi-auto pistol in history, was first built by Colt for the Marine Corps in 2013, which led to other manufactures (the Colt patent is long expired) to produce similar rail gun designs. Today both full size Government Models and Compact 1911s are available with accessory rails. In 2016, Colt’s introduced the Combat Unit Rail Gun with a blackened stainless steel receiver and frame. The Swiss Arms 1911 TRS is very similar to this model using anodized black all-metal (alloy) construction. The blowback action pistol has the Colt Combat Unit Rail Gun-style integral dustcover rail and uses correctly sized, self-contained CO2 BB magazines. The extended capacity magazine shown is actually made by Tanfoglio for their 1911 CO2 models, but is completely interchangeable with the Swiss Arms semi-autos. read more 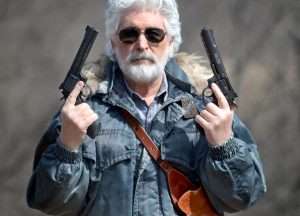 Down to the wire, the Umarex S&W Model 586 and Gamo PR-776 are nearly an equal match despite their significant price difference, but only one will turn in the best accuracy.

There are some surprises with these two CO2 pellet revolvers and not the ones you may be expecting! Right off the top there was a big difference in average velocity with the Umarex S&W Model 586 averaging 415 fps with 7.0 grain Meisterkugeln Professional Line lead wadcutters. With a fresh CO2 cartridge the highest velocity the S&W clocked was 429 fps. A second run through the ProChrono chronograph averaged 411 fps and standard deviation for 10 rounds was 13 fps. I expected the Gamo PR-776 to fall fairly close to the S&W but it averaged 430 fps with a high of 446 fps and a standard deviation of 10 fps. So for velocity with the 7.0 grain lead wadcutters the Gamo outperformed the Umarex by a small but consistent margin. But velocity does not in and of itself make one CO2 air pistol more accurate than the other. read more 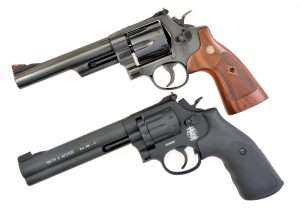 Umarex and Smith & Wesson teamed up to build a very accurate pellet pistol with the Model 586. In the absence of an L Frame Model, I am showing the CO2 model with an N-Frame S&W Model 57 .41 Magnum. Overlooking the full length L Frame lug on the 586, notice how well the airgun duplicates the hammer, rear sights, cylinder thumb release, and triggerguard contours. But what is that little lever sticking out behind the trigger on the 586?

With a price differential of $175 you could purchase a pair of Gamo PR-776 pistols for what one Umarex S&W Model 586 costs, so why make this comparison? The answer is simply that the Gamo is a heck of a lot of air pistol for the money, especially when you stack it up against the much more expensive S&W branded wheelgun.

Facts on the ground

Thus far we know that the Gamo is made the same way (and very likely in the same factory) as the Umarex S&W 327 TRR8. That happens when you have airguns built in Taiwan, an international manufacturing hub for brand name air pistols and air rifles. Taiwan is followed by Japan and Germany for the majority of CO2 airgun manufacturing. Germany is where most top-of-the-line Umarex pellet firing CO2 airguns are manufactured, like the Beretta 92FS, Walther CP99 and S&W 586. Umarex also has guns produced in Japan and Taiwan, but when an air pistol wears Made in Germany on its frame, the price is more often going to be higher. And commensurately you expect better fit, finish, and quality for the money. The S&W Model 586 does not disappoint. read more