The Most Bang For Your Buck Part 2

All blowback action models with self contained CO2 BB magazines, but not all exactly equal in design, fit, finish, or performance, yet they all sell for $99.99.

For those of you who own and shoot centerfire pistols, the cost of a day’s ammo at the shooting range can often reach $100, and after you are done, all you have is a lot of empty brass (if you police your brass and reload to save money on ammo) and the satisfaction of honing your target shooting skills and bringing home targets that reflect your day’s efforts. What the blowback action CO2 models in this article do is duplicate that range time, and if you have a safe backyard shooting area or a basement set up with an air pistol range, you don’t even need to leave the comforts of your own home. Dedicated airgun enthusiasts know this and gain the same benefits and satisfaction from target shooting with BBs or pellets as their centerfire handgun counterparts, only at a fraction of the cost. Skills learned with air almost entirely translate to shooting range experience with centerfire and rimfire pistols, more so the latter. A good blowback action CO2 pistol can come close to firing a .22, only with somewhat less recoil and much less noise. A .22 pistol with a sound suppressor is very close to a high performance blowback action CO2 pistol in feel and noise level. Blowback action CO2 models are good for practice, especially all of the models in this article, since they duplicate the look, feel, and operation of their centerfire counterparts. read more 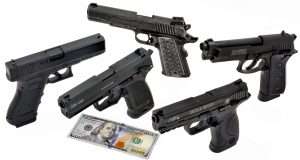 What this column has taught me over the years is that air pistols and actual cartridge-firing handguns (and rifles) are not mutually exclusive; a fairly high percentage of readers own both, and often choose duplicates of cartridge guns they own. But, there are also a fair percentage of airgun owners who do not own actual firearms, and they represent a group I call “airgun enthusiasts.” They were the intended core readership for Airgun Experience but as it turns out, they are not the core; the majority of readers own both. Still, it is the “airgun enthusiast” to whom I am writing most of the time. read more 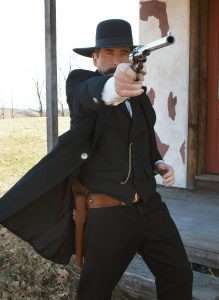 The big gun of the Old West was the .45 caliber Colt Buntline Single Action. With a 12-inch barrel length, as short as 10-inches and as long as 16-inches, that front sight was a ways out, and you had plenty of steel to sight along. A man with a Buntline could make the long shot.

That’s the title of a 1968 Jerry Lewis comedy that has nothing to do with handguns or air pistols, but the title makes a statement that does, because for the longest time in the history of handguns, the sights, if there were sights at all, were fixed in place. You didn’t adjust the sights, you adjusted your aim. 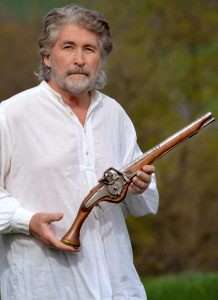 Long barrels were not an exception back in the 17th century, when the most powerful handgun made was the Wheelock. This model’s design dates back to the German Wheelock pistols built from around 1580 to 1620. There is a long hook on the opposite side of the frame so that it could be hung from a sword belt.

The front sights for handguns more or less evolved from the front sights on muskets, fowlers, and longrifles. The handgun, as an idea, began as the Chinese hand cannon, a small barrel one held in the hand, lit the fuse and pointed at a target. After awhile people started mounting the barrel on a short stick; it was easier to get another stick. Fast forward to the late 16th century and the hand gun was making a comeback in Europe, principally in Southern Germany, as a practical, hand held weapon with a clockwork-like firing mechanism known as a Wheel Lock (or Wheelock). To put this handgun design in some historical perspective, in the period from the mid 1500s to the early 1600s, a trained marksman armed with a Wheelock pistol could shoot a knight in armor off his horse. Of course, this worked as well the other way; a mounted soldier could carry two loaded Wheelock pistols in saddle holsters and one or two more hooked around a sword belt, and return fire from horseback. Hitting a moving target with a large caliber pistol that took almost a half second to fire from the time the trigger was pulled, was no small accomplishment. read more

The other side of the coin 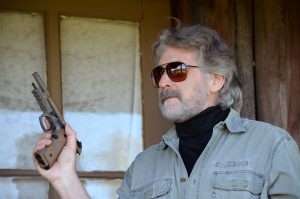 The M9A3 has a duality of purpose. It has proven itself to be one of the most accurate CO2 blowback action air pistols built. It is also one of the most realistic in fit, finish, and handling except for one feature unique to the Umarex 92A1 and M9A3, a selective-fire lever that takes the gun from semi-auto to full-auto operation. This was originally a feature of the 9mm Beretta 93R built from the late 1970s to the early 1990s.

Why is shooting the M9A3 on full auto worth a separate article? Well, the way I see it, switching from semi-auto to full auto is like kicking in the afterburners on a jet or hitting the Nitrous switch on a race car; it’s the ultimate performance. Simply, with the Beretta CO2 model, the select fire control makes the M9A3 capable of doing something most blowback action air pistols can’t. But this isn’t actually as great as I make it sound, and one of the reasons so few pistols offer this feature, either as CO2 models, or in the real world of selective fire handguns. There is, in fact, a very short list of select-fire pistols like the Glock 18 (fully automatic version of the Glock 17), the CZ 75 machine pistol, some rare old H&K VP70Ms (also the first polymer framed semi-autos), and Beretta 93R pistol. The M9A3 and 92A1 CO2 models are the closest BB-firing examples to the 93R. Even more rarified would be the Mauser M712 models from the 1930s, also, as we know, beautifully recreated as a CO2 model today. The issue with select-fire pistols, however, has always been one of accuracy. Full auto is suppressive fire to pin an enemy down, not target shooting. Full auto it is far more effective with a machine pistol at close range. The practicality of automatic fire, originally intended for rifles and machine guns, again was mainly for suppressive (saturation) fire with the intent of hitting a target in the process. At closer ranges, Tommy guns, the German MP40, and various select-fire H&K models, the Uzi, and M16-based carbines for the military and law enforcement, have been much more successful in the field than machine pistols, which also have more limited magazine capacities (the Glock 18 with a small drum magazine being the exception). For airgun enthusiasts, the new M9A3 is the latest select fire pistol, and with its incrementally longer barrel and better sights, it might just be the most accurate full auto CO2 model of the lot. read more 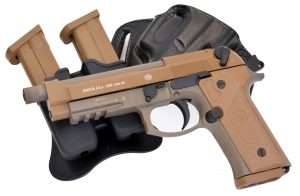 Air pistol design and manufacturing has advanced, by modest comparison, in the way that technology in laptops, tablets and smart phones has advanced in the past several years. Like I said a “modest” comparison, but look at the M9A3 compared to the 92A1. Only four years separate these two Umarex blowback action pistols, and they share many of the same features, but where they differ is significant enough to make the M9A3 a totally new generation of Beretta CO2 pistol, a gun closer to the new HK USP, Glock 17, and Springfield XDM 4.5 in design fit, finish, and overall performance, than the four-year old 92A1. read more 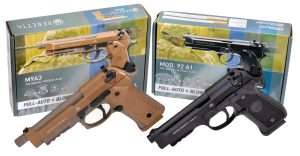 The newest 92A1 models come in a box very similar to the new M9A3 (a slightly longer gun) and both share the same basic features, though the M9A3 is considerably different in its overall design, which goes far beyond the color scheme.

The Umarex Beretta 92A1 has been among the best blowback action CO2 pistols since its introduction, and while it has been surpassed for overall authenticity by a few newer guns, it has never lost its appeal as a very interesting take on the military M9 pistol design. The M9A3 was intended to succeed it as the standard issue U.S. military sidearm, but that never happened and the M9A3 became the latest civilian model instead. As a CO2 pistol it is fairly quick on the scene, and like its centerfire counterpart, neither replacing nor duplicating the 92A1. For the air pistol there is one exception, using the same select fire mechanism. The M9A3 CO2 model is otherwise a generation ahead of the 92A1. Aside from the obvious changes shown in the original gun test and noted in Part 1 of this follow up review, there is the revision of the barrel breech to provide improved feeding from the magazine. So we will start with that change, and how well older and newer magazines work in the M9A3. read more 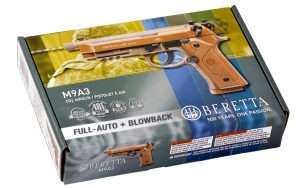 It’s a mighty fine box for the new M9A3 considering that a lot of guns that cost about the same, like the HK USP, come in throwaway plastic packaging.

Just as the Umarex Beretta 92A1 offered airgun enthusiasts the latest 9mm design in a blowback action CO2 model back in 2015, the new M9A3 brings the CO2 design up to the current centerfire model. And this is one area where Umarex has truly excelled in the CO2 marketplace. The initial test of this new model in March was done using a factory test sample in order to get a review out as quickly as possible. As with other factory sample guns, which are production quality but ahead of deliveries to retailers, and often without a box, I like to run a second series of tests with a new off-the-shelf gun. So here we are with a brand new, in the box, Umarex Beretta M9A3. read more