A competition of equals 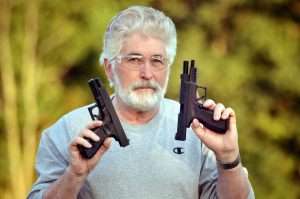 I have shot both the XDM 4.5 and Glock 17 Gen4 in 9mm, so I am familiar with their respective handling as centerfire guns. Both make excellent carry guns and their CO2 counterparts equally good substitutes for hands-on training with air. Each has its appeal, and both shoot and handle about the same. The question is, is one more accurate than the other?

Time, as they say, to see what happens when the rubber meets the road, and the Umarex Glock 17 Gen4 goes head-to-head downrange against the Air Venturi Springfield Armory XDM 4.5 model. The XDM is a slightly larger gun with every realistic feature possible for a CO2 model based on a centerfire pistol. Its overall design and execution is flawless. But, the same can be said for the Umarex Glock 17 Gen4. This is a contest of equals that will come down to ease of operation and accuracy. It is that one catch, ease of operation, which favors the Gen4 because it is faster to load the Glocks’s CO2 BB magazine than the Springfield’s. It is a small matter since extra XDM magazines are already available, and it’s only a problem if you are reloading the same magazine over and over. Extra XDM mags are not cheap, about $50 apiece, but essential for training, so you should have them anyway. (Unfortunately, Glock has not released spare mags for the Gen4 as yet, but they are forthcoming). The issue with the XDM mag being slow to load is a follower tab that is small and hard to hold down, but this is already being addressed with improved follower tabs for the next supply of XD magazines, so that will put the Gen4 and XDM on an even footing across the board. read more

Almost every polymer frame semi-auto made today, especially those equipped with an integral blade safety trigger, is tied to the Glock 17 design. Aside from the HK VP70, which used an ABS plastic receiver (the guns were built from 1970 and manufactured in several versions until 1984) the Glock was the first semi-auto to utilize a polymer frame. Now, just about every armsmaker in the world has a model with a polymer frame, and many, like the Springfield Armory XDM, use a Glock-style trigger safety, making it an even more interesting relationship between these two blowback action CO2 air pistols. The 9mm XDM and Glock Gen4 models have Melonite treated slides with a matte Parkerized-like finish that is nicely duplicated on teh CO2 models. (Glock originally used a Tenifer treatment and various finishes from a light gloss to the current matte Parkerized look).

Two guns that are so much alike yet built on two different principles offer features that make each distinctive in its handling and operation. Which is better? Statistically it would be the Glock, which has the longest history and is in use by more law enforcement, military, government, and private sector agencies than the Springfield XDM. But in terms of handling and safety, the newer Springfield design offers certain advantages as a centerfire pistol compared to the Glock 17 Gen4. This comes down to the additional grip safety on the XDM, the balance of the gun in the hand (1911-like grip angle), slide design, and a feature that I find very important, the striker status indicator. This is not an original idea, but rather is based on the design pioneered by Walther and used on the groundbreaking polymer frame, striker-fired P99 semi-auto in the late 1990s. It is simply the most effective way to know if the striker firing action is cocked. If it is, the indicator protrudes from the small opening in the back of the slide. If it is flush with the opening, the action is not cocked and the gun is not ready to fire. You have no way to verify this with a Glock unless you look at the trigger position. As for a loaded chamber indicator, both guns have one, the Springfield’s, which is positioned on top of the slide, is easier to see and feel than the indicator on the Glock, which is parallel with the ejection port. read more

Technology in CO2 design, construction, (polymer frames, since the centerfire guns are also polymer), and improved blowback action designs that operate like short-blowback, locked-breech, tilting-barrel design centerfire models, have made CO2 pistols more authentic over the past five to six years, but nothing can touch what Air Venturi and Springfield Armory have done with the XDM Series and Umarex and Glock have achieved with the new Gen4. These are your new top guns for authenticity of design.

I would usually save this kind of comparison for the December Reproduction Air Pistol of the Year rundown, but these two new CO2 models are quite literally the most authentic to their centerfire counterpart air pistols on the market, with perhaps last year’s Sig Sauer WE THE PEOPLE 1911 and the Umarex HK USP being the next closest runners up. Although I have to add, the technology in the Sig WTP is old, internally it is the same as the Umarex Colt Commander and all the 1911-style models that share the same CO2 BB magazines. The outside may be different, certainly better, more authentic, but not new in the sense that the Air Venturi Springfield Armory XDM 4.5 and Umarex Glock 17 Gen4 are. Had either or both of these new guns been introduced back in 2014 or 2015, they would have been hailed as revolutionary in the airgun world. Now, going step by step, generation by generation over the last five to six years, they are evolutionary, and that is still quite a point to make, considering all of the older designs are still in use by most airgun manufacturers. read more

A handful of Historic CO2 models 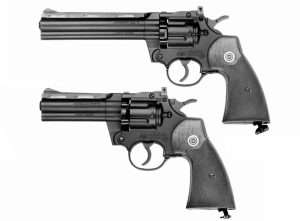 Back in the 1970s and 1980s Crosman was already building some authentic looking CO2 air pistols based on the then very popular Colt Python models. While long before air pistols with swing out cylinders and BB or pellet loading cartridges, these early CO2 models helped set the wheels into motion for the impressive CO2 wheelguns and semi-autos we have today. (Photo courtesy Blue Book Publications)

It is a nice August afternoon, sunny but not abusively hot, a light breeze and the perfect day to set up some paper targets in the backyard and have some fun shooting an air pistol. If that sounds far and away from my usual “this is a must have training gun” style, it’s because some days you just want to have some fun with no agenda, in fact, this is what air pistols (and air rifles) were meant for. Thanks to a very industrious airgun industry that begins with some very intriguing CO2 air pistols developed in the 1970s and 1980s by Crosman, which were copies of Colt, Smith & Wesson, and Walther models, (with a really heavy emphasis on Colt), the wheels of industry were already in motion for what we see today from Umarex, ASG, Sig Sauer, and others, who build air pistols that not only look and feel authentic, but work in much the same way as the actual centerfire pistols they are based upon. read more 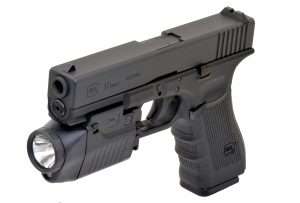 About as close to matching a GTL equipped Glock 17 Gen4 as you can get. This is a Glock GTL 22 tactical light and red laser mounted on the new Umarex Glock 17 Gen4. Every detail from the inside out makes this air pistol a winner right out of the gate.

The ultimate test of any CO2 model based on a centerfire gun is its absolute authenticity to duplicate the handling of its cartridge firing counterpart, thus making the CO2 model a worthwhile investment as a training substitute. But among the features that must match is the use of the same holsters, duty gear (magazine pouches for example), and accessories. In the case of the Glock 17 Gen4, that includes the full range of backstraps available as well as mounting tactical lights and laser sights made for the centerfire pistol. Beginning with the Umarex Glock 19 Compact, the standard Glock GTL system of tactical lights and light/laser combinations fit that gun, and each succeeding Umarex Glock model up to the Gen4. But the Gen4 also incorporates the interchangeable backstrap design. The CO2 model comes with the two standard backstrap panels originally developed for the Glock 17 Gen4 model. Since that time two additional designs have been introduced and are sold with the centerfire Glock 17 Gen4, medium and large backstraps with an extended beavertail. These come with the current guns and are also sold separately to retrofit earlier Gen4 models. The question is will they fit the Gen4 CO2 model? Sadly, the answer is no. read more

Downrange with a pair of Glock 17s 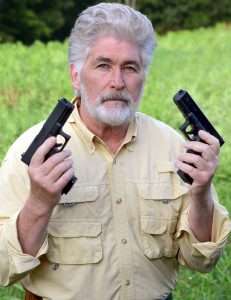 This is not an unfamiliar pose for me with actual centerfire gun comparisons in Combat Handguns, or even air pistol to centerfire gun comparisons, but I think it is a first with a pair of Glock CO2 pistols. The Third Gen G17, in my left hand, came out at the end of last year and made some serious points with shooters looking for an authentic CO2 pistol, but the just introduced Gen4 version, in my right hand, is definitely going to be a world beater for authenticity and shooting accuracy. It’s Glock vs. Glock.

This could easily have been the title of one of my reviews in Combat Handguns magazine, but it finally applies to air pistols thanks to Umarex and Glock giving the airgun world two Glock 17 models as blowback action CO2 pistols, the Third Gen and Gen4. There really isn’t much you can ask from a blowback action CO2 pistol based on a centerfire model that the new Umarex Glock 17 Gen4 does not offer (unless you absolutely must have the very latest Glock model’s understudy, a Gen5. We might see a Gen5 sometime in the future for the U.S. market, they have them in Europe already, as well as a Glock 34 and X19). At this point, however, for the U.S. market, the Gen4 checks all the boxes for a well-designed training stand-in that presents all the essential characteristics of handling and firing the centerfire pistol. read more

Total authenticity comes at a price

This is an interesting face off that is just about equivalent to the 9x19mm Glocks; the Third Gen Glock 17 vs. the Gen4 model in CO2. Both guns are equals in exterior design, but the Gen4 has the same design improvements as the 9x19mm model. It is real equivalence between guns based on the centerfire models.

Can you have performance and authenticity in the same blowback action CO2 pistol? Most would say yes, but in reality we have been exposed to the same kind of performance from blowback action CO2 models for years and our expectations are based on experience that tells us, 300 to 320 fps is the excepted norm for this type of air pistol. When guns, especially new guns like the Sig Sauer P365, fall below those expectations you look for answers in authenticity. When that fails, as in the P365 not being capable of field stripping like its centerfire counterpart, then the price point is used as a justification. In terms of guns like the P365, which is otherwise groundbreaking in its small size and use of a self-contained CO2 BB magazine, or established models with separate CO2 and stick magazines that perform well, like the Umarex Walther PPS and PPS M2, their shortcomings are overlooked because you are getting the most gun for the money. read more