The first great CO2 training gun and the latest

Perseverance and the pellet 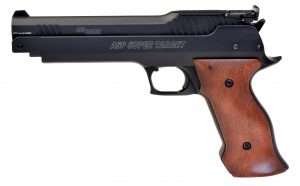 As the ASP Super Target comes from Sig Sauer, the trigger is well set up with a minimum amount of take up and a light pull in the mid 2 pound range. I think most shooters will find this factory set combination more than satisfactory, but the gun does have four excellent trigger adjustments, so nothing is chiseled in stone.

Rarely do I find myself doing follow-up tests with air pistols that have not presented a problem. The Sig Sauer ASP Super Target is working great, me, not so much. I settled into this gun with alloy pellets, and had it dialed in almost where I wanted it before moving on to the new Sig Pb lead wadcutters. Remember, I only have so much time to write a review, and usually the transition from one pellet to another doesn’t present such a vast difference in accuracy. Maybe I’m taking this too seriously, but if the gun can shoot 0.5 inch groups with one type of pellet, it should come close to duplicating that accuracy with another (with appropriate sight adjustment). That is where I took a little shortcut to get Saturday’s article finished. I usually don’t do that but I had a lot of confidence in the Super Target, or perhaps too much confidence in myself. Suffice to say I ran out of time and now I need to see if I can master this new combination. read more 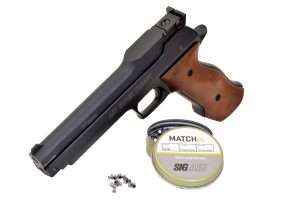 Meant to be a match by Sig Sauer, the new SIG AIR 7.71 gr. Match Pb lead wadcutters will cost you some velocity, but will they give you any edge in accuracy?

As promised, there is one last test to be done with the ASP Super Target using the new SIG AIR Match Pb series 7.71 gr. lead wadcutters. The weight difference between a 7.0 gr. wadcutter compared to the new SIG AIR Pb wadcutter’s 7.71 gr. is obviously going to result in a lower average velocity and I will run a 1:1 comparison switching from Meisterkugeln 7.0 gr. to the new Pb 7.71 gr. and chart the velocity variations for 10 shots. 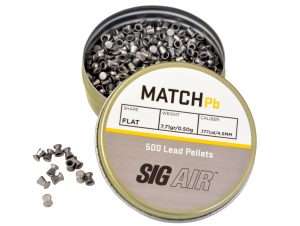 With the Match Ballistic 5.25 gr. alloy Sig Sauer wadcutters being discontinued, the new, heavier 7.71 gr. lead wadcutters are intended for a variety of Sig’s pellet-firing models and are one among a new series of Match Pb pellets in both .177 (4.5mm) and .22 (5.5mm) calibers.

The greater question with the heavier SIG AIR Pb is going to be accuracy at 10 meters vs. the lighter weight 7.0 gr. wadcutters, and more so, compared to the lightweight 5.25 gr. alloy wadcutters, which gave me a 0.5 inch group at 10 meters from a benchrest. To simplify the initial comparison between the Meisterkugeln and SIG AIR wadcutters, I am not going to readjust the sights on the Super Target from the alloy wadcutters I used last, but rather put up a target with a grid that can allow me to better chart the different POI shooting at the same center dot. I made these up myself awhile back so I could make more exact adjustments when sighting in lasers, but they will serve this purpose, too. Since the Pb wadcutters from SIG AIR are match grade, I am going to go on the assumption (always a big risk) that they have more consistent uniformity. read more

Both the Super Target (left) and X-Five are based on actual Sig Sauer models, well, at least the top half of the Super Target, and every inch of the X-Five. The question is, if you have a super target pistol like the X-Five ASP CO2 model, which can shoot 20 pellets and so a stand up job at 10 meters, what is the attraction of a single shot pneumatic that only shoots one pellet?

I know what you’re thinking because I’m thinking it too. If you’re shooting pellets, why not shoot a high performance, multi-shot Sig Sauer X-Five ASP CO2 pistol instead of firing one pellet from the ASP Super Target and having to stop, reload, and get yourself back in position for the next shot. Worse, if you’re shooting from a benchrest, it means removing the pistol from the rest, reloading, and then trying to reposition it in exactly the same place. I just did that for four days last week to review the Sig Super Target. Those of you who are dedicated, or at least seriously interested in single shot pneumatics, have your own answers. Those who may be attracted to the idea, but are perhaps, still on the fence, are wondering how close the semiautomatic X-Five ASP is to the accuracy of the single shot ASP Super Target. It’s a case of pellets vs. pellets but on a much more level playing field and Sig Sauer has control of the ball. read more

The underpinnings of all single stroke pneumatics, like the new Sig, the older, well-established HW 75, the Air Venturi V10 and FAS 6004 are similar, it is the small things that separate them, and that can make one more desirable than another. The Sig Sauer ASP Super Target has gone to school, as they say, on the experience of its predecessors, even the FAS 6400, and is in its own design the evolution of all the previous air guns, yet styled after a 9mm Sig pistol that has been around since the late 1940s. read more

The Sig Sauer ASP Super Target and Air Venturi V10 are two extremes in entry-level, single stroke pneumatics for 10-meter shooting. The Air Venturi V10 has a competition-based, oiled walnut grip design that cradles the shooting hand with an adjustable palm shelf, thumb rest, and a rough tree bark like wood finish that provides excellent gripping texture. The angle of the V10’s grip helps align the pistol for a proper one-handed shooting stance, which is mandatory in 10-meter competition. The Sig has a P210-based walnut grip and backstrap contour that is suitable for ambidextrous shooting and a two-handed hold.

There is a line between target pistols and 10-meter competition pistols that separates them into two different classes. I might use, as an example, IPSC shooting competitions, where you have classes for Standard Division, which is comprised of single action semi-autos with target sights, or the Classic Division, which is production guns like the CZ75/CZ SP01 Shadow, Glock 17, H&K USP or SIG Sauer P226/X-Five (which coincidentally are all made as comparable blowback action CO2 models), while at the other extreme you have the Open Division, which allows custom guns described by IPSC as “…quite expensive, extremely well-crafted competition pistols in the ‘Formula 1’ Division with single-action triggers, extended 170 mm magazines with capacities up to 28 rounds, illuminated dot sights and compensator systems.” The 9mm Tanfoglio Gold Custom would be considered tame compared to some of these guns, but among blowback action CO2 pistols is the leading gun. So, looking at single shot pneumatics in the same way, guns such as the new Sig Sauer ASP Super Target and older guns like the HW 75, are entry-level competition pellet pistols that would be comparable to the IPSC Standard Division; i.e., target pistols built for accuracy. The more dedicated 10-meter target models, like the FAS 6004 and Air Venturi V10, with grips based on 10-meter pistol styles, are still entry-level but one step up (some Beeman models fall into this group as well). From there you go into PCP (precharged pneumatic) single shot competition pistols that would be commensurate to Open Division guns in IPSC. read more 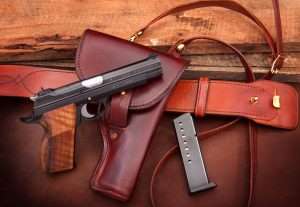 The reason for the strong P210 influence in the Super Target’s design dates back to the original 9mm Sig P210, which was developed in 1947! The designation for the new pistol was SP 47/8 and in 1949 it became the standard sidearm of the Swiss Army. The gun was later renamed the Sig P210 and it has been in production in one for or another for more than 70 years.

One of the most revered armsmakers in the world, Sig was established in Neuhausen, Switzerland in 1860. The acronym stands for Schweizerische Industrie-Gesellschaft (Swiss Industrial Co.), which started out building wagons and ventured into longarms in 1864, with the Prelaz-Burnand rifle. The company remained an independent armsmaker until 2000. Sig Arms was established to import Sig models into the U.S. almost 20 years ago, after corporate mergers beginning in the 1970s, brought Hämmerli Target Arms from Lenzburg, Switzerland (one of the leading manufacturers of Field Target and Competition air rifles), and J.P. Sauer & Sohn, GmbH, of Eckernförde, West Germany, known worldwide for their hunting rifles under the Sig umbrella. In 2000, another merger combined Sig with Mauser, SAN Swiss Arms AG, and led to the establishment of Sig Arms in the U.S, (which became Sig Sauer in 2007). read more