It is time to regroup. We have a gun that shoots well but not where it is aimed. Great sights but not regulated to the gun, or so it seems. The Nemesis has only been tested using the tandem rotary pellet magazine. So, before I lunge into the optics test, which I had planned to do anyway, let’s step back and test this gun with the single shot pellet tray. 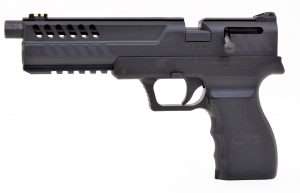 The Nemesis has a problem, great sights that are allowing shots to go high, way high, about 5- to 6-inches over POA. With no way to adjust them, I thought perhaps part of the problem was the tandem rotary magazine, so I shot a new test with the single shot pellet tray, as shown.

As much as I would like to say that’s the problem, this gun shoots just the same, high and slightly left, even with the single shot pellet tray, as it does with the rotary magazine. Without an adjustable rear sight, the Nemesis (this one anyway) needs a 6-inch POA correction to hit the bullseye. The only solution for this gun is going to be optics. read more

The eyes have it 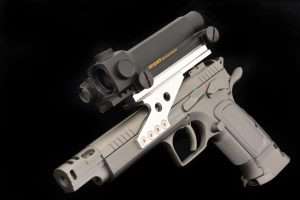 The Tanfoglio Gold Custom CO2 model and the 9mm centerfire model are competition guns designed for mounting optics. The optics of choice is red dot sights, either scope designs, or HUD reflex style. While scope-style red dot sights are more than 40 years old, as evidenced by this c.1983 Aimpoint Mark III mounted on the Tanfoglio’s rail, the concept has changed very little since Aimpoint developed the first red dot sights.

Why doesn’t a newer design make an older one so outmoded that it simply ceases to be relevant as a consumer product? I think the answer lies not only in the product but the longevity of its role in the consumer marketplace. This applies to just about everything including firearms and airguns. In fact, about the only place that this theory fails to prove itself is in communications and technology. I mean who would want to walk around today with a Motorola Dyna TAC? Same for early portable computers, sometimes new technology makes old technology into an anachronism. Not so with older airguns, which, even in the face of newer designs, still maintain their allure like many older centerfire and rimfire pistols and semi-autos. read more 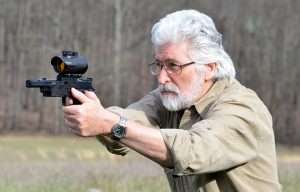 The BSA RD 42 adds a little more weight to counter the slide’s recoil and the much larger 42mm ocular lens is considerably faster to pick up for each successive shot. It makes the Sig Sauer P226 X-Five CO2 model a more accurate target pistol at 21 feet.

Most competitive shooters in Bianchi Cup, IPSC, USPSA, IDPA, and ISSF, (which includes 10 meter air pistol competition), will use optics on revolvers and semi-autos (depending upon the Division). The choices of optics vary from Mini Reflex sights, (which are mounted to the top of the slide on a recessed mount, or on an optics bridge), to larger red dot scopes. Mini Reflex sights have become the most popular, but many competitors still like the larger objective lens of a round red dot scope. Outside of competition shooting, Mini Reflex sights have also found their place in law enforcement, military and even civilian CCW use because of their small unobtrusive size. A growing number of semi-autos are also coming from manufacturers with modular optics systems (MOS) built in. The MOS design uses an interchangeable mounting platform that fits into a section of the slide that has been machined out. Competition gun builders call this a “melt.” It is intended to keep the optics mounting plate flush with the top of the slide, and thus lower the optics height to be more in line with the bore. While this is now the most often seen pistol design in Open Class Division shooting, many competitors, including some world champions, still defer to larger red dot scopes. In the last test of the Sig Sauer P226 X-Five Open, the gun was equipped with the Walther MRS, which is a reflex sight, though not as small as the C-More Systems STS used on the Tanfoglio Gold Custom in Airgun Experience No. 77. This time the combination will be the Sig Sauer P226 X-Five Open and BSA RD 42 red dot scope. read more