Drawing Practice and Stepping Down to A Subcompact

I have had a concealed carry weapons permit for over 20 years and the majority of handguns I have carried have been compact and subcompact semi-autos or revolvers, and almost all carried in a belt holster worn at the 4 o’clock position. The vast majority of CCW permit holders go with a smaller compact or subcompact handgun and one of the smallest 9mm models available, and most definitely one of the narrowest at 1-inch, is the Walther PPS and new PPS M2. The matching Walther PPS blowback action airgun is one of the most technically accurate of all the Walther air pistols and ideal for this discussion on training with airguns. But first let’s look at concealed carry drawing practice.

Over the years that I have carried concealed, I have never once had my handgun inadvertently exposed. I have worn them under sports coats, seasonal jackets, and even with an unbuttoned, tails-out shirt for concealment. No matter what the cover used, however, keeping your handgun out of plain sight is essential. This is where training with airguns can help hone your concealment skills.

Stepping Down in size 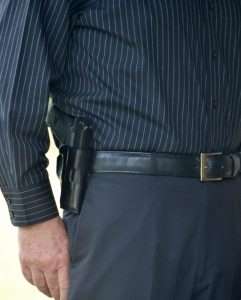 The first time you pick up the Walther PPS air pistol you have to wonder how Walther could make a $90 BB gun look and feel so much like a $599 semi-auto. The degree of detail Walther has put into this air pistol to make it look and feel “authentic” pays off in its value for training purposes. The PPS air pistol has the same operating features as the 9mm model with the exception of a blade safety in the trigger; this has been replaced on the air pistol by a cross bolt safety that can be set and released with the trigger finger.

The trigger’s shape is about the same and trigger pull a bit lighter at 5 lbs., 4.5 oz., compared to the 9mm’s average 7 lbs. 11 oz. It is still enough resistance at nearly 5.5 pounds to give the feel of pulling a real semi-auto trigger. Among other important features duplicated on the PPS air pistol is the use of white dot sights to match those on the cartridge gun, the same slide and magazine release levers, an integrated under-muzzle Weaver rail for mounting a small tactical light or laser, having to pull the slide to the rear to chamber the first BB, and of course, the slide locks back after the last round is fired. Thus, every operation once the gun is loaded is identical to firing a 9mm or .40 S&W PPS model.

To make this a true head-to-head comparison I compared a 9mm PPS with the airgun and used the same holsters for both, a Galco Combat Master and Galco Stinger, a smaller contoured holster designed for optimum concealed carry use.

I did one live fire comparison and aside from the different trigger design, lighter trigger pull, and, of course, recoil from the 9mm pistol (recoil management is the one thing you cannot learn with the airguns) you cannot tell one from the other until you rack the slide and pull the trigger. 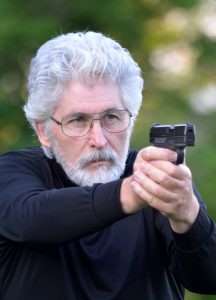 With a target set out at a combat distance of 21 feet, in terms of draw, sighting and firing, the air pistol gives you the exact same experience. You can also practice actuating the ambidextrous magazine releases built into the triggerguard, reloading and releasing the slide to chamber the first round. Everything works the same way on both guns. Thus for about $90 you can practice every aspect of handling the cartridge-firing PPS models.

As for accuracy, the best 5-rounds of Federal American Eagle 115 gr. FMJ fired from 21 feet with the PPS 9mm measured 1.20 inches. The air pistol nearly matched it with a best five clustered at 1.22 inches. The 9mm rounds  clocked 1,124 fps while the PPS air pistol sends its .177 caliber steel BBs downrange at 350 fps. Sighting with both guns was virtually identical. The air pistol has a bit more creep in the trigger but it is close enough to the 9mm PPS to make it a viable training tool.