The CZ-75 line begins with the original 9mm model (top left) in 1975 and advances through a number of design improvements including the SP-01 Shadow (top center) and the Shadow II Target (top right). The ASG CZ-75 blowback action line (bottom left) duplicates the 1975 model combined with elements of the SP-01 while the 2018 SP-01 Shadow (bottom center and far right) takes elements from both the Shadow and Shadow II with the updated frame incorporating a 1913 Picatinny dustcover accessory rail, sights from the original Shadow, rubberized SP-01 grips, and the larger ambidextrous thumb safeties and slide release.

ASG has done an exceptional job of creating blowback action CO2 models based on the CZ-75 design that not only live up to the CZ name but raise the bar for air pistols with authentic details and accuracy to centerfire pistol dimensions, weight, balance in the hand, and functional features. The all-metal CZ-75 and new SP-01 Shadow are nearly perfect reproductions of their centerfire counterparts from external design to field stripping and basic internal operation. This is everything you want in a CO2-powered blowback action BB pistol. 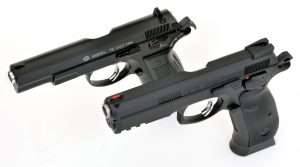 The evolution of the CZ-75 is well represented by the two ASG CZ-75 blowback action pistols combining the essential design features from 1975 to the present day within the CZ-75 and CZ-75 SP-01 Shadow. This is a must have pair of CO2 models for CZ enthusiasts.

Breaking down the details

A lot of really good air pistols look like the actual centerfire or rimfire guns they are based on, but many only “look” like the actual firearms, very few actually operate like their cartridge-loading counterparts and the ASG CZ-75 blowback action models are two excellent examples, and not just in how they handle. As important as ease of operation, is the ease in which a gun can be taken down in the field for cleaning or to address a mechanical malfunction. There are few semi-autos built today that take down as easily or as quickly as CZ-75 and this applies to the CO2 models as well! 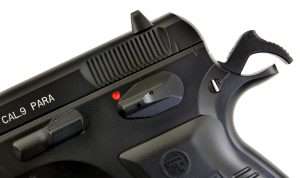 The CZ-75 is one of the easiest handguns to fieldstrip and this goes for the ASG CO2 model as well. After removing the magazine and clearing the gun, simply cock the hammer and align the two indicators on the slide and frame… 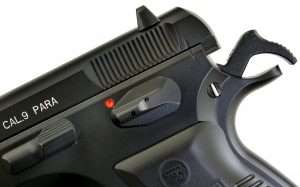 …this only requires a short press back on the slide. Once in this position with the two marks aligned, simply push in on the tip of the slide release pin (on the right side of the frame) and then pull the entire release lever out from the left side. At this point you can pull the slide, barrel and recoil assembly forward off the frame.

With the centerfire guns, the magazine is removed and the chamber cleared, and then all that is necessary is to cock the hammer and move the slide back 3/16ths of an inch, thereby aligning two registration marks (one on the slide, one on the frame) and pull out the slide release lever. The slide slips off the frame. The double spring guide rod and barrel are then easily removed. The CO2 model disassembles the same way only the barrel and guide rod have an additional screw that holds them in-unit for the CO2 pistol and to remove the barrel from the slide this screw must be removed, but that level of disassembly for cleaning is not necessary for a BB-firing pistol. There is one difference between the CO2 CZ-75 and SP-01 Shadow in that the slide release lever on the Shadow has a detent in the pin that engages a spring wire (which you can see looking through the opening in the slide) when it is reinserted. This simply requires a little extra push for the detent in the pin to slip under the wire. 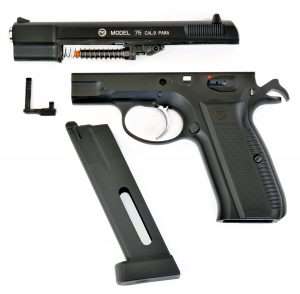 The ASG CZ-75 and SP-01 Shadow (CZ-75 version shown) disassemble like the 9mm model. Here the major parts, magazine, frame, slide and slide release lever are laid out. On the 9mm model you would also remove the guide rod and barrel from the slide. 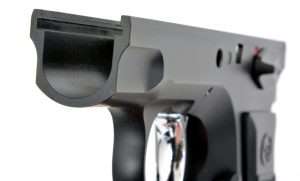 The CZ design as previously noted has the slide rails running inside the frame rather than over it, like most semi-auto pistols. Running the rails inside the frame lowers the height of the slide, keeping it closer in line to the bore axis, as well as making a tighter fitting slide-to-frame fit.

Here you can see the slide as it fits into the frame on the standard CZ-75 CO2 model.

With this ease of field stripping for CZ-75 models (and CZ-75 based handguns like the Tanfoglio) it is easy to see why the centerfire CZ design is so well liked by police, military, and competition shooters the world over. The CO2 version is a .177 caliber equal.

Speaking from the left and the right

I am fortunate to be an ambidextrous shooter, even though I am right handed. Shooting left-handed also comes in handy for me since I am left-eye dominant. While many ambidextrous handguns prove to be less capable when not shot right handed the large thumb safeties on the SP-01 Shadow CO2 model are easy to operate with either hand. Left handed, the slide release is also quick to drop, though not as quick as using the thumb when shooting right handed. As for the large magazine release, if you shift the gun in your left hand just slightly you can easily hit the mag release with the trigger finger. It is not an ideal arrangement (an ambidextrous magazine release would be great here) but for the most part left-handed shooters will not be greatly handicapped by the CZ.

The other noteworthy advantage with the SP-01 Shadow model is the red fiber optic front sight which will make target acquisition against any background (except red) much easier than black on black sights, and even a little more versatile than white dot sights. 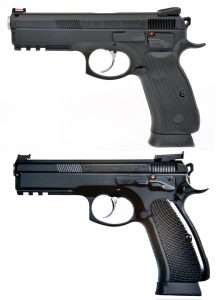 The latest SP-01 Shadow models in .177 caliber (top) and 9mm (Shadow II Target bottom) share many of the same design features including the dustcover accessory rail and updated frame contours, red fiber optic front sight, SP-01 skeletonized hammer, front and rear slide serrations, and larger thumb safeties and slide release. The CO2 model also has SP-01 rubberized grips (not used on the Shadow II 9mm model) and like it or not, the large base pad magazine used on the CO2 models is absolutely correct for the SP-01 Shadow design.

The CO2 Shadow stacks up pretty evenly with the 9mm CZ-75 SP-01 Shadow II Target. The 9mm version is made in the CZ Custom Shop, like the previous Shadow and Shadow 2 models. The Target II is a competition-ready Pre-B style SP-01 Shadow, featuring a CZ Custom trigger job with the new short reset single-action trigger, fully-adjustable rear sight, fiber optic front sight, stainless steel guide rod, lighter springs for competition (11 pound recoil and 13 pound main springs), extended magazine release, drop-free magazines and checkered aluminum grips. The design for the SP-01 Shadow II Target was created by champion shooter Angus Hobdell’s CZ Custom Shop to have trigger pulls of 3.0-4.0 pounds single action and 7.5-8.5 pounds double action. The 9mm pistol has an overall weight 41.1 ounces, overall length of 8.15 inches, height of 5.79 inches and width if 1.46 inches. The CO2 model weighs in at 38.0 ounces with an overall length of 8.15 inches, height of 5.79 inches, and width of 1.5 inches (to the outer edges of the ambidextrous thumb safeties). The self-contained CO2 BB magazine has a 17 round capacity; the 9mm model holds 18 rounds. 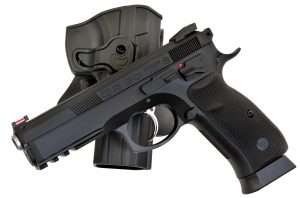 The 2018 ASG CZ-75 SP-01 Shadow blowback action CO2 model is the first blowback version with the updated frame and 1913 Picatinny accessory rail. As such it will not fit holsters for the standard ASG CZ-75. ASG wasted no time in offering a Strike Systems Tactical Gear paddle holster for the new model with a Level 1 triggerguard locking system. Once holstered the wearer must activate the release paddle on the front of the holster with the trigger finger before the gun can be drawn. This is the minimum retention level for law enforcement holsters to prevent a gun grab by an assailant in a scuffle. The SP-01 Shadow and Strike Systems rig are an ideal training holster and pistol combination.

The grip on the CO2 model with its contoured, SP-01 rubberized grip panels, and checkered front and backstrap, plus integral thumb rests is solid in either hand. And ASG even has a new Strike System Tactical Gear injection molded Level 1 paddle holster ready for the Shadow. The SP-01 Shadow CO2 pistol stands up in almost every way to its 9mm counterpart; another bullseye for CZ and ASG.

In Part 3 we will examine handling, holster draw and accuracy at 21 feet.