Testing The PM 1951 – The Pistolet Makarova

We know that some gun designs are timeless, and that for others time runs out, and even though they may remain “timeless classics” like the Broomhandle Mauser, their production comes to an end. In the 1950s, this was to be the fate of the Tokarev TT-33.

In recreating historic handguns as air pistols manufacturers like Gletcher steer clear of using plastics for their airgun construction, and by using all metal components, their CO2 copies of famous vintage handguns not only provide greater durability, but more accurate styling, proper weight, and methods of operation through blowback semi-auto actions. Blowback designs serve multiple purposes, not only for realism, but to chamber the next BB from the magazine or re-cock the hammer on hammer-fired models like the PM or Pistolet Makarova Model 1951, the Soviet pistol that would replace the Tokarev TT-33.

The Pistolet Makarova, was originally issued to Soviet officers during what we look back upon today as the “Cold War Era” when the U.S. and Russia began a chilly and dangerous game, the stuff of which books and movies have been based upon for decades. Until President Ronald Regan uttered those historic words, “Mr. Gorbachev tear down this wall” on June 12, 1987, the cat and mouse game of Cold War detente that America and Russia had played helped make guns like the Makarov legendary.

The Gletcher copy of the famous 9x18mm Makarov PM 1951 was designed to duplicate the original giving great attention to detail. By using a blowback action and a full-sized magazine containing both the CO2 and 16 .177 caliber steel BBs, the all metal construction airgun delivers the approximate weight, balance in the hand, and action of the original design. The PM 1951 was the original successor to the aging Tokarev TT-33 and was developed by Soviet arms designer Nikolay Makarov. Interestingly, Makarov’s pistol was one among many designs submitted to replace the TT-33, and was ultimately deemed the best design to meet the demands of the postwar Soviet military. It was first issued in 1951 (overlapping the TT-33) and remained the Soviet’s primary military sidearm until the early 1990s.

It is not too difficult to see some of the influences of Makarov’s design, notably the Walther PP, which was introduced before the Tokarev TT-30 back in 1929. This is nevertheless evident in the slide design, blowback action and a fixed frame-mounted barrel surrounded by a large recoil spring. Makarov had his own ideas as well; in fact, in some respects the Makarov was a step backward from the TT-33 in that it regressed to the harder to operate European-style magazine release mounted at the bottom of the grip frame. This design, compared to the Walther PP and Tokarev TT-33’s push button magazine release, was a severe handicap to an expeditious reload in the field.

Like the Tokarev, the PM 1951 also used an 8-round single stack magazine but was chambered in 9x18mm Makarov (a slightly larger bullet diameter than a 9x19mm) and was a more powerful handgun than the 7.62x25mm Tokarev. It was also a double action/single action design with the safety also de-cocking the gun when set.

Makarov’s design for the manual safety on the left side of the frame was a significant improvement over the TT-33’s safety mechanism, and the gun was easier to grasp overall due to its contoured grip design (again a lot like a Walther PP). It proved to be a most suitable successor to the TT-33 and the next legendary Russian handgun of the mid 20th Century.

While the Gletcher PM 1951 uses a single action trigger that looks like the Makarov’s double action design, it handles the same and looks authentic right down to the details in the grip panels. The Gletcher PM 1951’s blowback action adds yet another layer of authenticity to shooting this air pistol, and using the self-contained CO2 and BB magazine gives the gun even more realistic handling when reloading and chambering the first round to cock the hammer. The magazine’s weight also helps center the gun in the hand and improve the pistol’s balance. With an average velocity for the PM 1951 of 329 fps, this is a very smooth and fast shooting airgun. And for the curious among you, yes this airgun disassembles exactly like a Makarov, which is to say, the same as a Walther PP or PPK, revealing a barrel fixed to the frame and surrounded by the recoil spring. It is one of the very authentic features of this gun, though there is no actual need to take it apart for the modest cleaning and oiling an airgun requires.

Trigger pull is an exceptional 4 pounds 14 ounces average with a short take up and almost instantaneous reset. It is one of the best air pistol triggers I have tested, which adds to the PM 1951’s surprising accuracy. The safety clicks on and off with authority and the slide release feels exactly like one on a cartridge-firing handgun, not a copy of one.

Even though the original-style sights are not the easiest to acquire, the gun is steady in the hand and the 3-1/2 inch smoothbore barrel delivers better accuracy than expected. At a test distance of 21 feet my best 10 shot group (out of 16 shots) all fired offhand using a two-handed hold, measured 1.125 inches in the 10 and X ring of a Birchwood Casey Big Burst target. 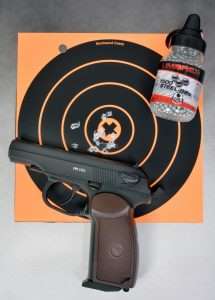 If you like the classic Soviet pistols of the Cold War era, Gletcher’s PM 1951 is one of the best CO2 airguns you will find.