It is unusual for a new pistol and a matching .177 caliber airgun to come out at nearly the same time, which in gun years can be years, but in this instance 2016 for the M22 airgun and 2015 for the ISSC M22 Gen2. (The original M22 model was produced from 2009 to 2014 and replaced by the improved Gen2 version last year).

The airgun is a 1:1 reproduction of the ISSC M22 and is also a fully licensed design, so it bears all of the .22LR model’s markings, including cal. 22lr which is unusual for an airgun. (Perhaps a bit too accurate as this can be confusing to someone not familiar with the gun, but when you depress the magazine release and a combination CO2 and BB magazine drops out, instead of a .22LR magazine it’s pretty clear). In size, weight, and features the airgun also uses a polymer frame and metal slide, and like the .22LR, has identical controls, a blowback action slide, molded-in finger grooved frontstrap, a working hammer, and blade trigger safety. Oddly, for the airgun the ambidextrous manual thumb safeties (a redundant safety feature of the .22LR since it has the blade trigger safety) are non-functional on the airgun and just molded into the slide. The CO2 version does have the same dustcover accessory rail as the .22LR, making the airgun suitable for training with short (compact) lights or lasers. And training is one of the key points about the ISSC M22 airgun.

At first glance you have to think to yourself, “Hum, Austrian design, looks a lot like a Glock, has the same Glock-developed integral blade safety trigger, same general contours, how can ISSC do this?” Well, the .22LR model is a de facto Glock 26 subcompact in general design (right down to the slide lock disassembly releases on the frame) but different enough with its hammer-fired action and additional ambidextrous thumb safeties, not to be a Glock. And Glock doesn’t make a .22LR pistol. Thus the ISSC design fills a small but popular gap for a Glock-style .22LR pistol and a .177 caliber airgun version.

The ISSC .22LR model is made in Austria, while the airgun is manufactured under license in Taiwan. This is pretty much common practice in the airgun world, where product branding adds that air of authenticity that mechanical features alone cannot always provide. So, the .177 caliber airgun is a “nearly” identical copy of the ISSC M22, a gun that can equally serve as a training pistol for subcompact 9mm Glock models. In fact, it fits and locks into the same Level II Galco MX4 Matrix auto locking holster used for the Glock 19!

The M22 airgun has a 4-inch barrel, and weighs in at 22 ounces (empty). A Glock 26 weighs 21-3/4 ounces (empty) and the .22LR M22 weighs 23 ounces. Almost inch for inch and ounce for ounce, both the M22 airgun and ISSC .22LR match up to the Glock 26 for use as a training gun. You just have to overlook the hammer-fired action, different style slide serrations, and since the manual thumb safeties are only cosmetic on the airgun, you can skip those, too, as they have no real bearing on using the M22 as a training pistol for the Glock. Even if used as a training gun for the .22LR ISSC pistol, it’s nearly 100 percent correct in operation and handling. For the small investment, there’s really no downside here.

Key is the operative word here because the airgun has a key to lock the blade safety trigger (something even Glock doesn’t have), the M22 has Glock-style white outline notch rear and white square blade front sights, an identically-shaped and positioned magazine release, and a beveled ledge below the slide release to avoid unintentional contact with the release while firing. Were it not for staring into the back of a cocked hammer, from behind the sights you could be shooting a Glock. One noteworthy advantage is that the ISSC can be fired double or single action, whereas the Glock is a SAO (though the gun is regarded as a DAO). The first shot with the ISSC can be fired single action or double action, since it is a hammer-fired gun. Trigger pull on the airgun averaged 8 pounds, 6 ounces DA, and 7 pounds, 3 ounces SA. This is heavier than the .22LR model or a Glock, which has an average trigger pull of 5 pounds, 8 ounces. But the important thing is to learn the feel and operation of the blade safety trigger, and you will learn this with the M22 airgun. And after the first shot is fired with the M22, every subsequent shot is SA since the hammer is re-cocked by the blowback action slide. 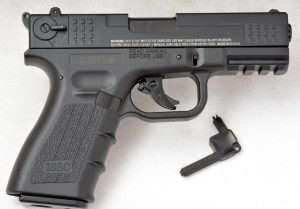 Handling this gun from a training aspect is very good. First, it fits the Glock Level II holster, which is designed to keep the gun from accidentally falling out (since it is an open top holster with no thumb break safety strap), and more important, preventing a gun grab by an assailant. The holster employs a cantilevered paddle that locks inside the slide’s ejection port firmly securing the gun in the holster until the paddle lock is raised by depressing a thumb release before drawing the gun. 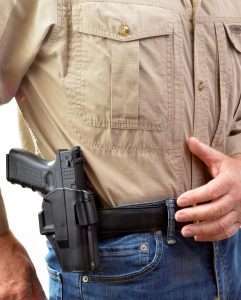 Secondly, you have both a correct size and shape magazine release and a self-contained, drop free magazine. And with extra magazines you can use the airgun to practice reloading and tactical reloads. The sights are almost identical to the Glock (and easier to acquire than a lot of current airgun sights), the trigger design and operation will give you the feel and resistance of a real 9mm Glock (or other blade-type trigger safety) handgun, and overall after practicing with the M22 you will begin to acquire the muscle memory to holster, draw, and operate the .22LR model or a subcompact Glock.

The responsibility of authenticity

With all airguns, but copies of actual, modern production handguns like the ISSC M22 in particular, there comes an added responsibility. Airguns that look and operate the same as their cartridge-firing counterparts cannot be easily distinguished by others. Airguns are sporting guns designed for target shooting, plinking, and even serious competition shooting, and the more realistic they become the greater the responsibility in their use. Airguns used to train in the handling and carrying of their cartridge-firing counterparts demand an awareness that the public’s (and law enforcement’s) perception of an airgun that duplicates a cartridge-firing handgun is the same. Their ownership and use requires the same level of personal responsibility and forethought in their carry, public display (brandishing in public) and use, as one would give any cartridge-firing handgun or long gun. This too, is part of learning the Airgun Experience.

For this test of the ISSC M22 airgun I used my personal favorite, Hornady Black Diamond .177 caliber black anodized steel BBs. Average velocity for the M22 airgun is rated at 400 fps so the blowback action has a little more push which adds to the feel of the gun’s handling and slide movement. This also helps in learning to reacquire the sights after the slide has closed. For the test I used a Law Enforcement Targets cardboard IPSC target set out at 7 yards (21 feet).

The trigger on the airgun has more stacking than a Glock blade safety trigger, thus you learn how to better engage the safety and pull the trigger smoothly for each shot. On the downside, the trigger design on the M22 airgun requires a full release between shots, so there is no quick reset. The modest recoil from the blowback action is sufficient to aid in learning sight reacquisition.

The best 16-shot group measured 2.2 inches. The M22 is not a target pistol; it is a sturdily built plinking and training airgun with average accuracy for a blowback action design fired offhand at 21 feet. There are more accurate .177 caliber blowback action airguns out there, but none are as close to a Glock in design and handling, making this a suitable training gun and well worth the modest $100 investment for a CO2 pistol.