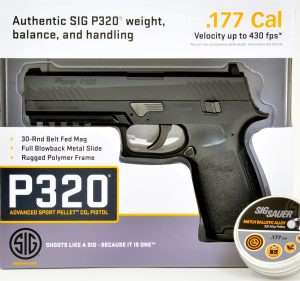 One less thing to complain about, the P320 ASP comes in a well constructed box with a two-piece clear molded liner to store the gun. The P320 ASP is shown with Sig Sauer’s own brand of cast alloy pellets which should generate the most velocity from the new CO2 semi-auto.

“Authentic Sig P320 weight, balance and handling” are the first words you see on the box for this new pellet-firing, blowback action airgun from Sig Sauer. Following the launch last year of the P226 ASP, Sig set out to build the P320 CO2 model to duplicate their polymer-framed, striker fired semi-auto in weight, balance and trigger pull, so that it too, could be used as a training aid like P226 ASP. Many on the consumer side are not impressed with what becomes a limiting factor in the Sig Sauer ASP designs, i.e., their non-functional components, and use of a traditional separate CO2 chamber and magazine. As a pellet firing pistol this latest model from Sig Sauer still raises the bar on overall design by introducing an innovative 30-round, rotary belt-fed magazine. As a blowback model, this is a benchmark in pellet-firing semi-auto air pistol design, making the small investment in a P320 ASP well worth while on that point alone. 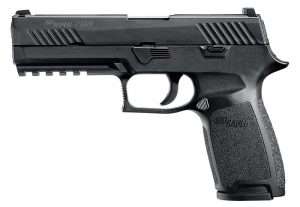 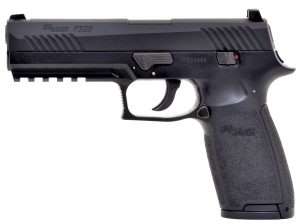 ….and this is the CO2 model. Were it not for the telltale manual safety in place of the slide release the airgun would be nearly a 100 percent match. Even still, it is close enough to serve as a hand’s on training gun. Will the ASP get to play that role in the future, a future where the Sig Sauer P320 is the U.S. Army’s new military standard issue sidearm?

The P320 ASP is based on the standard P320 Nitron Full-Size centerfire model. Looking at the P320 ASP solely as a training aid, what is actually required to fulfill that role? The airgun has to duplicate the size, so that it fits the same holsters as the centerfire models; it has to allow for mounting of accessories such as tactical lights and light/laser combinations; it also must simulate the centerfire models carry weight, grip design, sighting system, and DAO trigger. That’s a long list of requirements. Add in blowback action, and the Sig Sauer P320 ASP meets every requirement for a training counterpart. 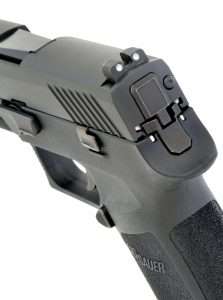 From a training standpoint the Sig Sauer P320 ASP has to fulfill several important roles beginning with the rear sights. On the P320 centerfire model (shown) the sights are SigLite tritium night sights. 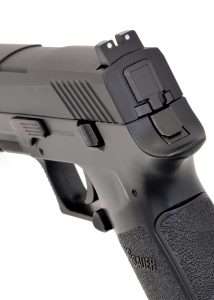 The P320 ASP has white dot sights and though they appear to be dovetailed, they are in fact molded into the slide. For practice, they nearly duplicate the P320’s rear sights. 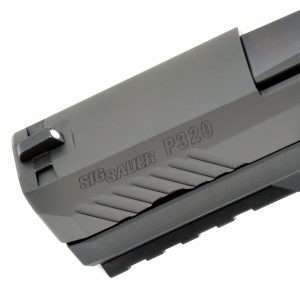 Learning to acquire the sights and get the gun on target can be taught with the ASP, which can send a 4.5mm pellet downrange at over 400 fps to prove one’s ability to hit the target accurately at up to 10 meters. Granted there is a great absence of recoil, but the airgun still works as a very affordable teaching aid. This is the real P320. 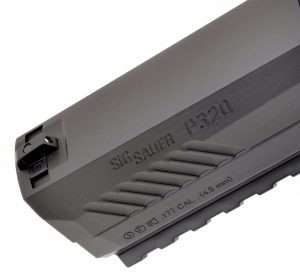 The P320 ASP’s front sight is also a white dot and as the photo shows, everything looks about the same as the centerfire model right down to the contour of the slide and the front serrations.

Where the Sig falls below expectations is in not having a slide that locks back on an empty magazine, nor a functioning slide release (ambidextrous or otherwise). There is also the mandatory airgun manual safety that replaces the left slide release, and lastly, the ASP lacks a self-contained CO2 BB magazine, thereby eliminating accurate tactical and empty magazine reloading practice. If, in Sig Sauer’s estimation, these missing features are not as important as the primary functions duplicated from the centerfire model, the P320 ASP is better suited as a training gun than an “enthusiasts” air pistol. On the other hand, the ASP air pistol line is dedicated to firing more accurate 4.5mm (.177) lead or alloy pellets from a rifled steel barrel, and Sig did make one intriguing concession with the P320 ASP, designing the 30-round magazine to load either a pellet or a steel BB in each loop of the rotary belt. 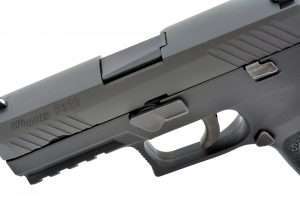 In this side view of the P320 Nitron model the two big sacrifices of the airgun are revealed by the barrel lug and slide interface and left hand slide release. 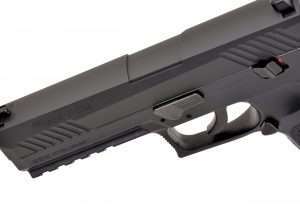 Comparably sized, the P320 ASP has the weight and balance, but the blowback action slide has a molded in barrel lug slide interface and there is no ejection port when the slide retracts. The left slide release is replaced with a mandatory manual thumb safety, not so much a bother since the slide doesn’t lock back on an empty magazine.

The rifled steel barrels also make the ASP models suitable for shooting at 10 meters, rather than 21 feet, which is the optimum distance for blowback action CO2 BB-model accuracy. The P320 ASP has an internal barrel length of 4.68 inches, and overall length of 8.0 inches, height of 5.5 inches (base of grip to top of magazine and not counting the height of the rear sight), a width of 1.25 inches and carry weight (empty magazine) of 28.5 ounces (1.81 pounds). 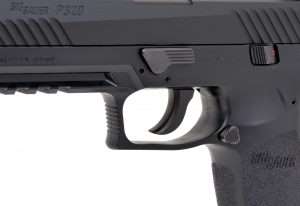 The triggerguard, DAO trigger design and magazine release on the P320 ASP are virtually identical to the centerfire P320 models, further supporting the training aspects of this airgun. Trigger pull on the CO2 model is right in line with the centerfire guns, though it does not have the short reset of the actual pistols.

By comparison, the P320 Nitron has an overall length of 8.0 inches, overall width of 1.3 inches, height of 5.5 inches, and carry weight (empty) of 29.5 ounces (1.84 pounds). The ASP is clearly a close enough match to allow it to replace the centerfire model for training exercises.

With an overall length of 8.0 inches, the P320 ASP has the size, heft, and balance of its cartridge-firing counterpart. While it may not have every feature airgun enthusiasts expect in a blowback action model, it does meet all the basic requirements of a training gun for anyone who plans on purchasing and learning to use a Sig Sauer P320. The MSRP for the airgun is $119.99. A Sig Sauer P320 starts at $679.

When it comes down to pulling the DAO trigger, standard trigger pull on the centerfire P320 is factory rated at 5.5 pounds (and if required a heavier 7.5 pound trigger is offered). Trigger pull on the 9mm model I tested in 2014, averaged 6 pounds 4 ounces, which with the gun’s short trigger pull (0.625 inches), zero over travel and quick reset was a nominal deviation. The P320 ASP has a trigger pull of 6 pounds, 3.5 ounces average, right in the middle between the standard and heavy trigger, with 0.725 inches of take up and moderate stacking. It does require almost a full release to reset. The P320 ASP is nevertheless a very easy gun to handle and shoot just like the cartridge-firing Sig Sauer P320.

In Part 3 the P320 ASP heads downrange for training practice and accuracy testing at 10 meters.

Blowback action models like the Sig Sauer P320 provide the look, feel and operation of their cartridge-firing counterparts. All arguns, in general, look like guns, but those based on real cartridge-firing models even more so. It is important to remember that the vast majority of people can’t tell an airgun from a cartridge gun. Never brandish an airgun in public. Always, and I can never stress this enough, always treat an airgun as you would a cartridge gun. The same manual of operation and safety should always apply.