Back in 2000 when Walther and Umarex introduced the CP99 pellet-firing model, it was as physically close to the 9mm P99 as possible (for the times and available technology for semi-auto air pistols). The very first blowback action CO2 model, the Walther PPK/S, was also introduced that year, so in terms of advancements in design, technology, operating systems, and model variety, the airgun industry has grown in leaps and bounds over the last 17 years. The new Sig Sauer P320 ASP represents another of those advances being the first high-capacity, blowback action semi-auto pellet-firing pistol.

Every achievement in the development of blowback action air pistols, up to this point, has centered around .177 caliber BB models with very few exceptions, most notably the Umarex Beretta PX4 Storm, introduced in 2007, and the first to offer a dual 8-shot pellet and BB stick magazine. Sig Sauer introduced its first ASP model, the P226, in 2016 with a similar 8+8 rotary stick magazine. It was intended to be both a sport shooting 4.5mm pellet pistol and a training aid for those using the P226 or P228. It has not been in production long enough to determine the P226 ASP’s success for training, but given that Sig Sauer has followed up only one year later with the P320 ASP, there has been some universal acceptance of the ASP models based solely on their merit as CO2 powered, semi-auto pellet pistols.

What the P320 ASP has brought to the table is a pistol that actually has “fewer” features than the P226 ASP which, being a hammer-fired pistol, includes a correctly-designed safety and manual de-cocking lever, a functioning slide release (although the slide does not lock back on an empty magazine), and all-metal construction to duplicate the models carried by U.S. Navy SEALS. The centerfire P320 is a polymer framed pistol as is the CO2 model and raises the bar for capacity with its new 30-round rotary belt-fed magazine. Most of the P320’s internal mechanisms, however, are based on the P226 ASP with improvements to accommodate the new magazine design. The loading of CO2 is still accomplished by inserting the 12 gr. capsule into the backstrap channel, only the ASP uses a one-piece removable backstrap and magazine floor plate (revealing an integral seating screw), whereas the P226 ASP offers a hinged backstrap panel that upon closing automatically seats and pierces the CO2. In this respect the P320 is a step back, as it takes longer to load a CO2 capsule.

While it appears the P320 ASP is less of a pistol than the P226 ASP, one has to consider the major advances Sig Sauer made in firearms design between the traditional hammer-fired P226 and P320 striker-fired centerfire models, and this relates to how the CO2 pistols differ as well. The P320, as previously noted, is a polymer framed modular design for simplicity of operation and quick interchangeability of components allowing the pistol to be reconfigured for different mission requirements. That simplicity translates to the P320 ASP as having fewer features than the P226 ASP for the same reasons. Unfortunately the ASP is not a modular design, just a basic physical match to the full-sized P320 centerfire model.

Having tested the 9mm P320 I am familiar with its operation, which is truly simple, almost the semi-auto equivalent of a DAO revolver since there is no manual safety (the safety on the ASP is a mandatory feature for air pistols) no hammer, and only the ambidextrous slide releases and a disassembly lever. The P320 is built to be as straightforward as possible for a semi-auto, and yes you can say the same for a Glock and several other modern polymer-framed semiautomatic pistols. The P320 ASP shares in that simplicity, perhaps too much so for some, but serves its purpose as a training gun by fitting the same holsters, using the same rail-mounted accessories, having a slide that can be racked to chamber the first round, offering a correct DAO trigger design, weight and balance. You can practice most basic training drills with the CO2 model, even a tactical reload with a spare rotary magazine (albeit the wrong size). As for the airgun’s fixed sights, many military and law enforcement semi-autos have fixed sights, one learns how to correct. The U.S. military did it with 1911s for 74 years.

During the P320 ASP training session I practiced drawing and re-holstering from a Galco Quick Slide belt rig, racking the slide, sighting, firing, reacquiring the sights, and even a reload with a spare magazine (from another P320 ASP since spare mags are not yet available). I also practiced trigger control with the DAO action, just as I had done with the 9mm model, and like the centerfire pistol, the P320 ASP trigger is remarkably light for a double action only. So, I was able to do a decent basic training session with the CO2 model, including live fire at 10 meters, and aside from the obvious lack of recoil, a slide that doesn’t lock back on an empty magazine (and thus no slide release to practice with), the P320 ASP was a decent understudy for the 9mm. Would I like to see a couple of those missing features? Absolutely, if nothing other than a slide that locks back and a left side slide release. The requisite manual safety could be moved to the opposite side and replace the ambidextrous slide release on the right. As for the advantages of a semi-auto CO2 pellet-firing pistol with a 30-round magazine, it means more time on the range between reloads, and it is hard to find fault with that.

The Sig Sauer alloy pellets clocked 388 fps as tested by a ProChrono chronograph equipped with an infrared Competition Electronics indoor lighting system. Switching to Meisterkugeln 7.0 gr. lead wadcutters, the rounds cleared the ProChrono traps at 324 fps. The P320 ASP is factory rated at up to 430 fps but the highest velocity achieved was 392 fps with the Sig Sauer alloy pellets.

The target was an IPSC cardboard competition silhouette set out at 10 meters. All shots were fired offhand in 10-round groups using a Weaver stance and two-handed hold (as shown). The P320 ASP delivered a best 20 rounds at a full spread of 2.01 inches, a best 10-round group at 1.25 inches, and best 5-shot group measuring 0.75 inches on top of the “A” of the A-Zone. At 10 meters fired off hand, I am not disappointed with this result from a blowback action pellet pistol, although I have shot tighter groups with a 4.5mm rifled barrel Colt Peacemaker. But that’s really not a fair comparison with a 7-1/2 inch Colt SAA vs. a shorter barreled semi-auto, and I am a revolver guy to begin with, so I almost always have better results with wheelguns than semi-autos.

Switching to .177 caliber steel BBS, the gun delivered a best 10 rounds at 1.25 inches. Velocity with steel BBs averaged 332 fps. The P320 ASP was able to fire just over 50 rounds before CO2 performance began to drop off. Peak performance was between 30 and 45 rounds. 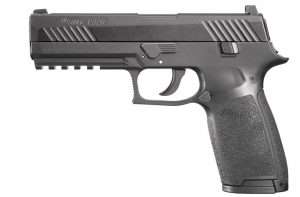 As a training gun for the full-size Sig Sauer P320 Nitron, the P320 ASP does a fine job of allowing a number of muscle memory disciplines to be practiced and at a very reasonable cost. It is a good understudy for that specific pistol, but is it the best pellet-firing semi-auto available? Since the Sig Sauer P320 and P226 ASP models are currently in a class almost all their own (as pellet-firing blowback action semi-autos), it depends upon what you want to accomplish. Looking at the final results, it is clear that there are a number of CO2 powered blowback action BB models that exceed the P320 ASP’s features, but cannot surpass its accuracy at 10 meters with 4.5mm pellets. If you like the concept of the Army’s new Sig Sauer P320 centerfire model, then you have to like the P320 ASP. And while it may not be all that it can be, it is a pretty good airgun.

Blowback action models like the Sig Sauer P320 ASP provide the look, feel and operation of their cartridge-firing counterparts. All arguns, in general, look like guns, but those based on real cartridge-firing models even more so. It is important to remember that the vast majority of people can’t tell an airgun from a cartridge gun. Never brandish an airgun in public. Always, and I can never stress this enough, always treat an airgun as you would a cartridge gun. The same manual of operation and safety should always apply.