Shooting .177 (4.5mm) Round Pellets through a rifled barrel pistol 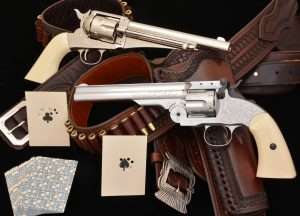 Smoothbore BB revolvers like the Bear River Schofield and Remington Model 1875 can fire BB-loading cartridges and also fire pellet-loading cartridges, and do so quite accurately as evidenced by these 21 foot shot playing cards ala John Wesley Hardin.

As we have proven in earlier articles, cartridge-loading smoothbore CO2 BB revolvers that have pellet cartridge-firing counterparts (or pellet-loading cartridges available), can also shoot 4.5mm lead or alloy pellets quite well; not as accurately as a rifled barrel model, but well enough to make it worthwhile with models like the Schofield and Remington. The cartridges are interchangeable, but you would not want to shoot a steel BB in a rifled barrel Colt Peacemaker; it’s a one-way street, unless you want to risk damaging the rifling with a steel BB. 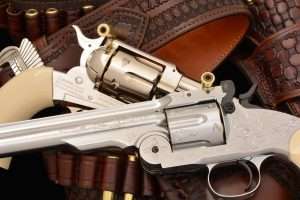 On the other hand, some semi-auto style pellet-firing pistols with rotary magazines can shoot pellets or BBs. This started back in 2007 with the Umarex Beretta PX4 Storm, which uses a reversible 8-shot rotary magazine that will hold pellets or BBs. The downside to this, as has been pointed out numerous times, is that if you shoot steel BBs through the PX4 Storm, over time you will erode the surface of the barrel rifling and accuracy with pellets will begin to decline. 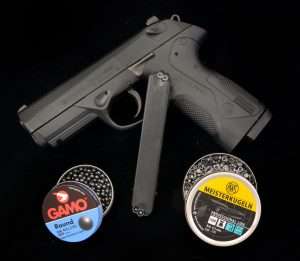 The first air pistol from Umarex to offer reversible 8-round rotary pellet magazines was the Beretta licensed PX4 Storm semi auto. This blowback pistol can shoot pellets or BBs. It was designed with a rifled barrel for improved accuracy with wadcutter lead pellets, but can also shoot steel BBs, which are held in the pellet chambers by a magnet at each end of the stick magazine. The use of 4.5mm lead round pellets will give the gun longer life as shooting steel BBs will eventually erode the surface of the rifling. Though it is not mentioned by Umarex, the lead round pellets work just fine and fit firmly into the pellet chambers of the rotary magazine, since they have the same diameter as a 4.5mm pellet. The Meisterkugeln Professional Line lead wadcutters are loaded in the top rotary magazine and the Gamo lead round balls in the bottom.

The idea behind the PX4 Storm and other similar designs that have followed, (like the Gamo PT-85 and new Umarex Walther PPQ among others), is allowing shooters to practice with lower cost BBs and use more expensive pellets for serious target shooting. In comparison a 500 count tin of Meisterkugeln Professional Line 7.0 grain lead wadcutters (my personal choice) retails for $15 while a 250 count tin of Gamo 4.5mm lead round balls sells for $5.95. Double that and 500 round balls retail for $11.90. Discounted price for Gamo round balls on Pyramyd Air is actually $3.95 and Meisterkugeln wadcutters $12.55. Either way, 500 rounds are not prohibitively expensive for target shooting or plinking with any pellet pistol that can also shoot BBs (or 4.5mm round lead balls). 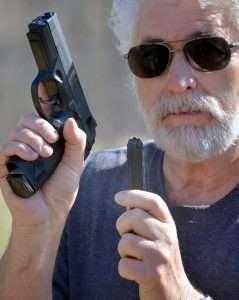 The size of the lead round pellets keeps them in place in the rotary magazine which uses magnets to hold the smaller diameter steel BBs. Without the magnets steel BBs would fall out of the pellet-sized chambers.

To evaluate the PX4 Storm with pellets, BBs and 4.5mm round balls I am doing back-to-back tests for velocity and accuracy at 21 feet, which is the best distance with BBs. Pellets should be accurate to 10 meters or a little beyond, but to keep things even all tests will be at 21 feet. 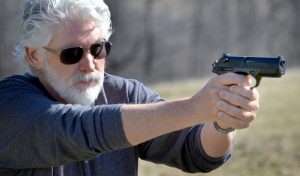 The PX4 is no tack driver and the heavier grain weight lead round pellets slow velocity considerably, but the gun remains satisfactorily accurate for its price range and quality. 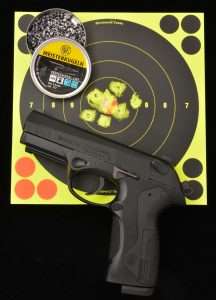 The PX4 Storm punched eight lead wadcutters into 2.125 inches (all in the X ring of the Shoot-N-C target) with a best five measuring 1.50 inches. Not exactly a target pistol but the white dot sights are nice, and the pistol has snappy recoil for CO2.

At 21 feet the PX4 Storm punched eight lead wadcutters into 2.125 inches (all in the X ring of the Shoot-N-C target) with a best five measuring 1.50 inches. Not exactly a target pistol. The 4.5mm lead round balls offered a small advantage at the same distance giving me a best eight shots at 1.75 inches but below POA gathering seven of the eight in the 9 and 10 rings from 7 to 8 o’clock, with a measurement of 1.43 inches. The group opened up to 1.75 inches with a flyer in the bullseye! Switching to Umarex .177 caliber steel BBs for the final test, I ended up with eight shots at an uninspiring 2.75 inches but as I shot and corrected I managed to plant five of the eight inside 1.25 inches and my first three, all low, strung together at 0.687 inches. 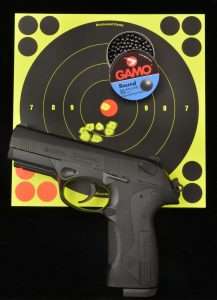 The 4.5mm lead round balls offered a small advantage at the same distance giving me a best eight shots at 1.75 inches but below POA gathering seven of the eight in the 9 and 10 rings from 7 to 8 o’clock, with a measurement of 1.43 inches. The group opened up to 1.75 inches with a flyer in the bullseye! 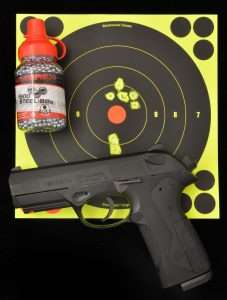 With Umarex .177 caliber steel BBs in the PX4 I ended up with a wide spread comprised of one three shot group at 0.687 inches and five shots grouped (after correcting POA) at 1.25 inches.

Stepping this back to earlier rotary magazine pellet-firing models, like the highly regarded Umarex Walther CP88, raises an interesting question. This is the original rotary pellet semi-auto model introduced in 1996, and it is still manufactured today. I am loading the magazine with eight Gamo 4.5mm lead round balls instead of wadcutter pellets. You have to be sure the balls are well seated in the magazine but the round pellets deliver an average velocity of 359 fps. The high was 379 fps, the low 345 fps with a standard deviation of 11 fps. This compares with Meisterkugeln lead wadcutters which delivered an average velocity of 417 fps with a high of 439 fps, a low of 406 fps and a standard deviation of 11 fps. The Meisterkugeln Profession Line wadcutter pellets have a grain weight of 7.0; the heavier Gamo 4.5mm round lead pellets weigh 8.2 grains, which explains the lower velocity. 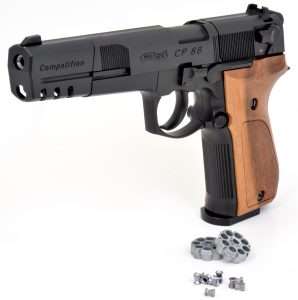 The Umarex Walther CP88 Competition brought the classic design of the Walther P88 Champion 9mm pistol to the world of airguns in 1996. The 4.5mm, 8-shot semi-auto is based on the most exclusive of the centerfire P88 models manufactured in 1992. 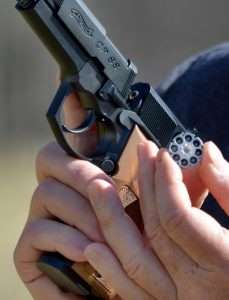 The CP88 cast alloy rotary magazines will seat the round lead pellets but they have to be pushed in firmly. Once in place they stay put like a wadcutter pellet and perform as well at 21 feet.

While you can do this, I am not sure why you want to with a fine target pistol like the CP88. But you could also shoot the 4.5mm lead round balls from a CP99, the PX4 Storm, or other multi-load rotary magazine air pistol, but let’s look at the accuracy differential between round ball and pellets; the latter designed for target shooting. 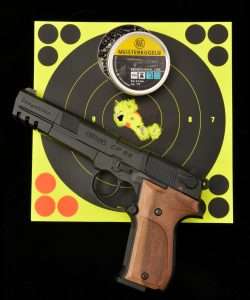 At 21 feet with the CP88 and Meisterkugeln 7.0 grain lead wadcutters my best group measured 1.75 inches in the 10 and X rings with five of eight shots just under 0.74 inches blowing out the X.

At 21 feet with the CP88 my best group measured 1.75 inches in the 10 and X rings with five of eight shots just under 0.74 inches blowing out the red dot X. From the same distance using Gamo round balls I actually did better placing eight shots at 1.25 inches with three in the X. (In case you’re wondering, you cannot load steel BBs into the cast alloy rotary pellet magazines, they will fall out). At 10 meters I doubt the lead round balls could match the accuracy of the wadcutters, but at 21 feet they aren’t bad! 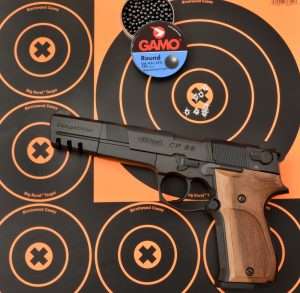 Loaded with the Gamo 8.2 grain lead round pellets the CP88 gave another impressive run dropping eight shots into 1.25 inches with three in the X.

Whether or not you decide to shoot 4.5mm round pellets in a rotary magazine fed pellet pistol is strictly a matter of choice. You can’t hurt the gun because the 4.5mm round lead balls run down the barrel rifling the same as a 4.5mm wadcutter pellet, and pistols that can alternately shoot steel BBs are better off with the lead balls in my opinion.

While I can’t see the logic of shooting BBs in a pellet pistol, unless it is just to shoot less expensive ammo for practice, the rotary stick magazine fed models like the PX4 Storm and Walther PPQ are built to do it. But any rifled barrel 4.5mm pellet firing pistol will aslo handle the 4.5mm round lead ball, even though it is primarily for single shot pellet rifles and pistols; what’s good for one, is good for eight.

7 thoughts on “Proofing a theory”