The underpinnings of all single stroke pneumatics, like the new Sig, the older, well-established HW 75, the Air Venturi V10 and FAS 6004 are similar, it is the small things that separate them, and that can make one more desirable than another. The Sig Sauer ASP Super Target has gone to school, as they say, on the experience of its predecessors, even the FAS 6400, and is in its own design the evolution of all the previous air guns, yet styled after a 9mm Sig pistol that has been around since the late 1940s.

While the Weihrauch HW 75, Air Venturi V10 and FAS 6004 are well-established models, they are all visually eclipsed by the new Sig Sauer ASP Super Target, because its design is instantly recognizable, having been based on the iconic Sig P210. (The Super Target is shown with the current 9mm P210 Target model)

There is a sense of marketing genius in this, because even though the Super Target is a new air pistol, it bears the profile of a heritage gun and is instantly recognizable as a Sig. Looking at the field of competitive single stroke pneumatics, even the very popular HW 75, the ASP Super Target becomes the most familiar by design and name recognition. But what is behind the name? What can a Sig single stroke pneumatic deliver?

Given that the total difference in velocity between alloy and lead wadcutters (5.25 gr. vs. 7.0 gr.) is only 35 fps average, 384 fps vs. 349 fps, I have opted to do the majority of the accuracy tests with the Meisterkugeln lead wadcutters. I am still awaiting the new Sig Sauer Match Pb 7.71 gr. lead wadcutters, so there will be a follow-up to this at some point. And of course, many of you have favorite wadcutter pellets for testing beyond my preference for Meisterkugeln. 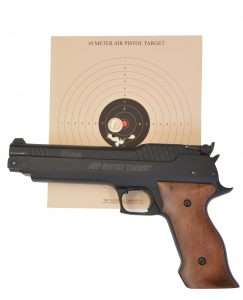 My first test was shot from 10 meters off hand with the sights left as they were when I shot the 21 foot tests. My first five Meisterkugeln rounds grouped low into 1.0 inches center to center.

Sight adjustments were made to the Super Target for the 21 foot chronograph tests, since I had decided to set up a target and see what the Sig would do fired off hand at that distance. I had to bring the rear sight up and right to keep shots on the bullseye with a 6 o’clock hold. I wasn’t disappointed. My first test today was off hand at 10 meters. At the competition distance, I shot with a two-handed hold (so I’m out of the 10-meter discipline), and put my first five Meisterkugeln rounds into 1.0 inches center to center but all low. I had four of five overlapping inside 0.687 inches. 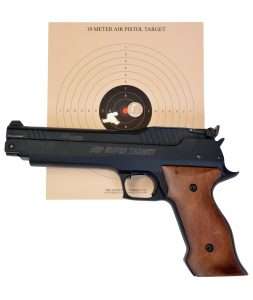 Sometimes things don’t work as expected and my sight correction took me a littler further off POA, still my groups were very tight, in fact all overlapping, but with a fairly worn backer the pellets tore the target rather than making neat holes. While hitting low and left of POA, all five shots measured 0.65 inches center to center.

Before changing to H&N Sport Match Green 5.25 gr. alloy wadcutters, I shot one more target with Meisterkugeln (and another slight sight adjustment) and finally got myself dialed in, placing five rounds at 0.56 inches with three overlapping in a horizontal cut across the 9 ring at 9 o’clock. 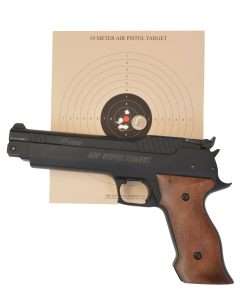 A few more sight adjustments brought my POA and POI pretty close together shooting off hand with the Meisterkugeln and I punched five rounds into 0.56 inches with three overlapping. I also put up a new cardboard backer for the baffle box, so it was back to clean holes in the target and not rips through the paper.

Between the Sig Sauer Match Ballistic 5.25 alloy wadcutters and the H&N, I decided to focus on the H&N since the Sig alloy are discontinued. Shooting off hand with H&N, I hit a little low, except for one in the bullseye, which gave me a spread of 0.625 inches. 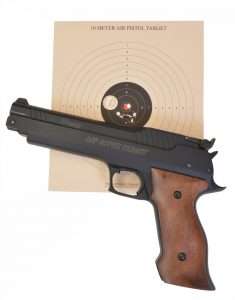 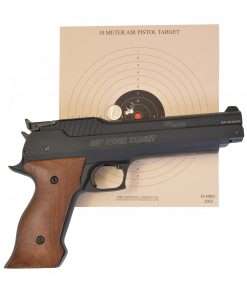 Using the Hyskore benchrest, my first target with the H&N was off POA and my five shots hit high and left but measured 0.56 inches.

I decided to end the day shooting with the H&N from the benchrest, which gave me my second best target for the day with the Sig Sauer ASP Super Target putting five rounds into 0.56 inches, but just off to the left and high of the bullseye. I did one last test with the sights readjusted again for the H&N Sport alloy wadcutters, and I got it them all in the center, one in the bullseye, and the rest just a hair above, with all five shots inside 0.5 inches. 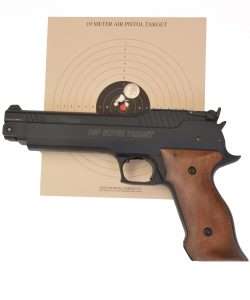 Another sight adjustment brought me on center but still a little high. This remains a work in progress for me with the H&N at 10 meters. Nevertheless, this 5-shot group measured 0.5 inches, and while I would like to have seen it 0.5 inches lower, I think my work for the day is proof that the Sig Sauer is an accurate entry-level 10-meter pistol.

The Sig is about as accurate as I can be with a pellet pistol from a benchrest. A dedicated benchrest target shooter will likely be able to put five shots under 0.5 inches and all in the 10 and bullseye. Guns like these are a lot work, a lot of trial and error, but the results can be gratifying. Working up to this level of accuracy, but shooting one-handed, is the ultimate goal with the Super Target. I know many of you can and will achieve this with the new Sig. It is a worthy contender in the entry-level 10-meter, single stroke pneumatic class.

When the new Sig Sauer Match Pb pellets arrive, I will go into trigger adjustments (which were left as set by the factory for this series) and run the final velocity and accuracy tests with the ASP Super Target at 10 meters.