Airing out the Tanfoglio

To evaluate the Tanfoglio Gold Gustom I selected Hornady Black Diamond black anodized steel BBs, which are high quality BBs with proven accuracy. For a target I used an IPSC cardboard competition target (with A, B, C, D target zones) which was set out at 21 feet, the nominal distance for blowback action air pistols (although the Tanfoglio also shoots very well at 10 meters).

The Tanfoglio’s custom trigger averaged a very light 2.9 pounds (lighter than traditional 1911 airgun triggers). Velocity from the 5-inch smoothbore barrel averaged 336.39 fps. To make this a full test of the gun’s practice capabilities, I mounted a Truglo Red Dot Open Series sight with dual color, red or green dot, and 5 MOA reticle. For the daylight test I used the green dot at its highest setting.

Trigger pull was crisp with a very quick reset, and there’s just enough energy in the slide’s recoil to give the Tanfoglio a little felt recoil when fired. The advantage is in allowing you to practice reacquiring the optics on a moving slide and get the dot back on target. The competition slide release is easy to activate, as is the right side slide racker knob. The ambidextrous thumb rest safeties drop into the fire position with ease while providing a solid resting point for the strong hand thumb. The Tanfoglio’s weight, 2.96 pounds, balance in the hand and operation are as close to the 9mm and .38 Super competition pistols as possible for an airgun.

For competitive shooting practice, drawing the Tanfoglio from the Safariland Bianchi Cup 014 holster is as important as shooting the gun itself. Practicing magazine changes,the rig was set up to with two magazine pouches to hold Tanfoglio .177 caliber magazines at the correct position and angle for a quick reload. Reloading contributes to making this a practical training experience.

Competition rings like the Safariland Bianchi Cup Model 014 are unique to competitive shooting with the holster body machined out of aluminum to stabilize the handgun while and offering minimal resistance for a fast draw. To secure the gun the holster features a patented injection molded adjustable trigger guard lock and the nosepiece at the front of the carriage fits into the handgun’s muzzle and help prevent the gun from being knocked out of the holster. The design also incorporates a triggerguard lock for the weapon. A simple push to the front locks and secures the handgun into the trigger block. Slide it to the rear and the trigger block is unlocked, allowing for a fast and efficient draw.

The 014 Open and Limited Class Holster design fits multiple guns from standard length handguns to handguns with compensators. By loosening four hex head locking screws and adjusting the length of the carriage it can be set to fit most 1911 models. The holster is mounted on a Model 032 ELS Competition Belt made for use with the Safariland’s Equipment Locking System (ELS). It features two rows of pre-cut holes running the full length of the belt which facilitate easy mounting of two to four competition magazine holders. Suggested retail for the holster is $200, the belt is $56.

Consistent drawing and reloading practice with the Tanfoglio .177 Gold Custom allows you to acquire the majority of muscle memory skills without going for broke on the real deal until you’re ready. Even for experienced shooters, the airgun provides a lot of low-cost practice time. 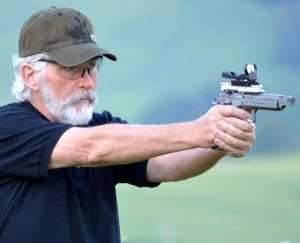 As for accuracy, the best group of 15 Black Diamond BBs literally blew a section out of an IPSC target’s A-Zone (red circle) with an overall spread of 0.74 inches. For beginning competition shooters, youth training, handgun familiarization, and target practice with an authentic competition pistol, this is one of the most enjoyable and exciting airguns you will ever own.