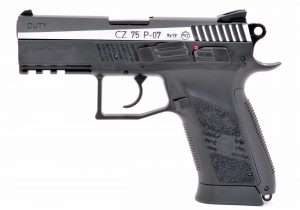 There are certain semi-autos that have a dedicated following, a kind of fellowship of owners who collect, shoot and carry one favorite handgun. There are those who swear by the Colt 1911 as the one gun above all others; myself, I lean toward Walthers, others the equally legendary Browning Hi-Power models, while some prefer Glocks (a very practical but hardly collectible handgun), but, you would be surprised how many gun collectors and gun owners throughout Europe, and in America, share a preference for guns that bear the Česká zbrojovka initials! The CZ 75 has become an iconic design that has been licensed (and unabashedly copied) by manufacturers the world over for more than 40 years; however, the original CZ brand is still the strongest. Among CZ’s own variations is the CZ 75 P-07, a polymer-frame model introduced in 2009, and one of the most innovative semi-autos of recent time. It uses a reconfigurable trigger/safety design that allows the owner to alter the pistol from a standard thumb safety for SAO cocked and locked carry, to a de-cocking system, for carry with a loaded chamber, hammer down and fired double action for the first shot. It is also an interesting size, large enough to be a carry gun for law enforcement and military, yet compact enough (slightly larger than a Glock 19) for CCW use. The P-07 was slightly updated with minor frame, slide and grip changes (interchangeable backstraps) in 2014, and remains one of the most popular polymer frame semi-autos in the world.

The blowback action CO2 model is a visual stunner, so close in appearance and basic handling that one is given pause to distinguish it at a glance from the 9mm and .40 S&W models. This is a fully licensed copy of the CZ 75 P-07 Duty (the original design designation) with correct factory markings on the left side of the slide, a flawless finish, white outline rear notch and white rectangle front blade sights, and the SAO trigger configuration with manual safety for cocked and locked carry.

The CO2 model has the same extended tang (beavertail) frame that helps reduce felt recoil on the cartridge-firing models, 3-slot dustcover accessory rail, large manual safety lever (unfortunately this is part of the “almost” caveat, since the safety is ambidextrous on the P-07 and the airgun only has a functional left side safety, the right side is cosmetic only and molded into the frame), correct oversized slide release, large triggerguard configuration, and that unmistakable CZ-style crescent trigger.

The magazine release is also a perfect match, which leads to the second “almost,” the use of a 20-shot stick magazine with a full size extended base pad similar to the magazine used on the CZ 75 SP-01 Phantom. The CO2 model also uses a knurled, round hammer similar to the SP-01, rather than the skeletonized V-form P-07 hammer design. The CZ licensed ASG airguns are offered in the standard black finish and in the deluxe finish shown, with the sides of the slide polished bright. This is a handsome looking air pistol that is “visually” worthy of the Česká zbrojovka name.

In Part 2 we compare the CO2 version to the 9mm P-07, spec it out for size, weight, barrel length, and then head to the test range.

Blowback action models like the CZ 75 P-07 provide the look, feel and operation of their cartridge-firing counterparts. All arguns, in general, look like guns, but those based on real cartridge-firing models even more so. It is important to remember that the vast majority of people can’t tell an airgun from a cartridge gun. Never brandish an airgun in public. Always, and I can never stress this enough, always treat an airgun as you would a cartridge gun. The same manual of operation and safety should always apply.