The cartridge-firing CX4 Storm, as well as the Umarex CX4 airgun, use a blowback action. The frames and pistol grips for both are a technopolymer composite. Both carbines loads with a handgun magazine inserted Uzi-style into the pistol grip, rather than a traditional rifle magazine positioned forward of the triggerguard. The advantage to the CX4 Storm’s pistol grip magazine well, is the same as with the Uzi, reloading the CX4 Storm is fundamentally identical to loading a semi-auto handgun with the trigger hand holding the grip and thus the magazine well, making it easier to position and insert the magazine, especially in combat and low light situations.

Umarex wisely chose not to build the CX4 Carbine to accept the 8+8 round reversible rotary magazine used in the PX4 Storm air pistol and designed a new, belt-fed magazine that has 30 individual 4.5mm pellet chambers that rotate around the outside of the magazine. The carbine automatically advances the belt to the next shot as the blowback action operates. Like the cartridge-firing models, the action has to be cocked with the charging handle on the right side of the receiver to chamber the first round.

The Umarex Beretta CX4 Storm is powered by an 88-gram CO2 cartridge providing an average velocity of 495 fps. (The CX4 Storm is rated at up to 600 fps for the U.S. market). This is one of the most powerful CO2 cartridge-powered air rifles due to the use of an 88-gram cylinder, which significantly extends performance and shooting with up to 200 rounds.

In terms of handling either the cartridge-firing CX4 Storm or the Umarex version, the ergonomic shape and open (thumb hole) configuration stock make the carbine easy to hold, with the bottom of the cutaway stock providing a solid wrist brace and precise positioning of the strong hand to easily release the safety with the trigger finger (the reset is done with the support hand thumb). Unfortunately, the ambidextrous features of the cartridge model, which allows reversing the extractor and ejector, the safety, magazine release, cocking handle, and the ejection port cover, for left-handed use, are not duplicated on the Airgun.

The 4.5mm model is only set up for right-handed operation, although shooting left-handed with the Umarex is absolutely not a problem, in fact, southpaws will find the cocking lever easier to use. Other features not relevant to operating the 4.5mm model are molded in and non-functional, such as the adjustable shoulder stock (adjustable length of pull), and the ejection port. Overall, the German-made Umarex model has the design of the Beretta CX4 Storm nailed down. The CX4 in 9mm or .40 S&W weighs a modest 5.75 pounds with an overall length of 29.5 inches, and height of 7.75 inches from the top of the rear sight to the base of a standard pistol magazine. The Umarex CX4 Storm pellet model is just slightly longer at 30.75 inches, a little lighter at 5.25 pounds, has a 17.5 inch rifled barrel (1.5 inches longer than the 9mm and .40 S&W barrels), and loads a 30-round rotary pellet magazine through the pistol grip.

Magazine changes are quick with the left side thumb release positioned at the top of the pistol grip, just like Storm semi-auto pistol. The front and rear sights are individually adjustable, the rear for windage and the front for elevation. The sights are military style and easy enough to use, but as with most modern tactical designs the CX4 Storm has an integral top Picatinny rail suitable for mounting a variety of optics or scopes.

The CX4 Storm shoulders solidly, the height of the cheekpiece puts you right in line with the sights or a rail-mounted optical red dot scope. A high rise mount would also allow use of optics while co-witnessing with the BUIS. 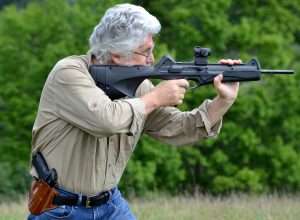 For weight and balance the Umarex is a solid double for the CX4 Storm Carbine and the airgun provides the majority of significant handing features (for a non cartridge-firing version) to get a working sense of how the 9mm, .40 S&W and .45 ACP caliber versions work. (The .45 ACP model was discontinued in 2013). The Umarex is shaping up to be a worthwhile investment in a modern CO2-powered, pellet-firing air rifle and with a potential for longer range accuracy.

In Part 3 it’s time to lock and load, and see how well this 88 gram CO2 air rifle can shoot.