“The Gun that Stunned the West”

The original Broomhandle Mauser (actually referred to by Mauser as the Pistole 7.73 until the Model 1930 and Model 712 were introduced), was a well-balanced gun with its center of gravity forward of the trigger to reduce muzzle jump. Recoil was more linear with the mass of the bolt slamming back over the hammer, and delivering its energy into the grip. As with all Broomhandle models the sharp recoil also drove the edges of the metal frame between the grips into the web of the shooter’s hand, which fortunately is not a problem with the Umarex airgun.

During the Broomhandle’s 43 years of manufacturing, the Mauser semi-auto engendered a great following, which extends to this day among arms collectors. The Umarex Legends Mauser 712 version, while lacking the lustrous blued finish of an original, offers all of the key operating features from the Model 712, arguably the most desirable of any Mauser Broomhandle because of its selective fire mechanism and interchangeable box magazine.

Up until the Model 712 the Broomhandle’s magazine was built integral with the frame, and there were three different cartridge capacities 6, 10, and 20 rounds. The standard barrel length was 5.5 inches and the guns were fitted with distinctive hardwood grips. Umarex uses a similar design to the detachable box magazine which holds both the CO2 and 18 steel BBs. Also like the original design, the Umarex Legends M712 uses a manual thumb safety actuated by pushing the lever upward into a notch which either locks the hammer so that it cannot be cocked, or if the hammer is cocked, pushing the lever up will lock the hammer in the cocked position. The large knurled ring on the safety makes it easy to operate and there is a positive lock when set, or when released by pulling the safety lever downward (level with the frame).

The Umarex Legends M712 also has an accurately reproduced selective fire control switch on the left side of the frame with the correct N R markings, N for single action and R for full auto. Another original Mauser detail that Umarex has properly reproduced is the elevation adjustable rear sight which is graduated out to 1000 meters; a wee bit optimistic for a blowback action CO2 airgun, but historically accurate.

At 51 ounces, including the box magazine (which weighs 15 ounces on its own), the Umarex Model 712 is no lightweight. The magazine is loaded by removing the base screw, inserting the CO2 cartridge, and threading the base screw back in with the supplied hex-head wrench and tightening it down until you hear the CO2 cartridge being pierced; pretty much the same as all 12 gram CO2 airguns, but the self contained CO2 and 18-round BB magazine really completes the look of the Mauser 712. The only noteworthy visual difference is the swell in each side of the magazine to accommodate the CO2 cartridge.

Loading BBs is just as efficient, using a follower that locks at the bottom allowing the BBs to be quickly inserted (one at a time) through the loading port. You really need to have at least two or three of the magazines because you’ll burn through 18 shots with this airgun pretty fast. 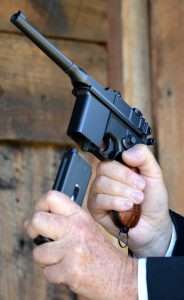 I loaded two magazines for a quick change during the test. Also, when firing full auto you can go through a CO2 cartridge in about three reloads. The magazine release button located on the right side of the frame is easy to activate with the trigger finger, and the drop free magazines are quick to change out.

Before firing the first round, you pull the bolt to the rear; this also cocks the hammer, which can then be set to safe. The operation of the selector switch is also identical to the original; press the button in and rotate the lever from N to R, to switch from semi-auto to full auto, or back again to return to semi-auto. Trigger pull on the test gun averaged 4 pounds 11 ounces with quick take up and a clean break from shot to shot. In full auto you have to feather the trigger to get burst fire or you will empty the magazine in 1.5 seconds! Average velocity is 360 fps.

For the shooting evaluation I used Hornady Black Diamond anodized .177 caliber steel BBs. The optimum range for a blowback action air pistol is about 21 feet and the Mauser placed a best 10 shots at 1.25 inches in the X, and the total of 18 shots spread 2.25 inches. Fired on full auto, the accuracy opens up considerably. Aiming at the top 9 ring, three bursts of fire laid down 18 shots across 3.85 inches, and I was using the original Mauser shoulder stock to get better accuracy. Shooting on full auto the Umarex Model 712 actually has a tendency to rise, and 18 shots under 4-inches is pretty decent from 21 feet. But, at that point you really don’t care how many are in the X bull, you just want to load another magazine and listen to that blowback action sing!