“The Gun that Stunned the West”

There once was a Sheriff from Anadarko, and no, that’s not the beginning of a limerick, but it is the beginning of a change in handguns that swept across what remained of the American West at the turn of the century. By 1900, a slow but continual shift from traditional revolvers to semiautomatic handguns was taking place. The first successful American made semi-auto pistols were manufactured by Colt and designed by John M. Browning. He had also patented a semi-auto design for Fabrique Nationale in Belgium which became the 7.65mm (.32 ACP) Model 1899-FN and improved Model 1900-FN. The later version is historically noted as being among the handguns carried by Cheyenne, Wyoming, Deputy Sheriff Richard Proctor, who arrested Tom Horn for murder in 1902. It was, however, the German influence that made one of the most stunning contributions to the change from revolvers to semiautomatics, not only by lawmen and outlaws, but the U.S. government as well.

The Model 1895 Broomhandle Mauser had already made such an impact in America that by 1899 the U.S. Army Board of Officers (Ordnance Department) began considering the adoption of self-loaders as a military issue sidearm. Those tests were continued through December and into February of 1900 which compared the 7.63mm Mauser Broomhandle, along with a 7.63mm Mannlicher self-loader (and a Model 1900 Borchardt-Luger tested in 1902-1903), all of which eventually lost out in trials to the new John M. Browning-designed .38 Rimless Smokeless Colt’s Model 1900. Hundreds of the new Colt semi-auto models were purchased by the U.S. government for field trials (Model 1900 and improved Model 1902) but in the end, the U.S. Army Board of Officers stayed with revolvers as a standard issue sidearm until the Colt Model 1911 was introduced. Nevertheless, the Broomhandle Mauser had left a lasting impression on America. By the very early 1900s the Broomhandle Mauser was being sold in the U.S. through New York City retailer Von Lengerke & Detmold, which imported 1,922 Broomhandle Mauser pistols between 1897 and 1905.

The Wild West and the Auto-Loader

There are numerous cases of early 20th century lawmen carrying not only traditional single actions but new Colt and S&W double actions, Colt’s .38 ACP Models 1900, 1902, and 1903 semi-autos, as well as imported guns like the FN 1900, Mauser and Luger Parabellum. There is photo evidence of this as well, including one Arizona lawman carrying a Luger in a Mexican-style drop loop holster, and the famous picture of that Sheriff from Anadarko Oklahoma Territory with his shoulder-stocked Broomhandle Mauser. That photograph was taken in the early 1900s by Annette Ross Hume who had arrived in Anadarko, O.T. around 1890. Her photographs of settlers, local Indians and the city of Anadarko began a series of images taken through 1910, though the majority of her work, now archived in the Phillips Collection of the University of Oklahoma Western History Collection, was done between 1901 and 1907.

The Anadarko Sheriff who carried a 7.63mm Mauser Broomhandle was very likely James Thompson, who became Sheriff on February 5, 1902, after Anadarko’s first Sheriff, Frank Smith and his Deputy, George Beck, were killed in a January 15 shootout with the Casey Gang, eight miles west of Anadarko. The killings made headlines all across Oklahoma. Smith was fairly well known and had plenty of experience as a lawman having previously been a Deputy U.S. Marshal in the Western District at Ft. Smith, Arkansas, and Sheriff of Cleveland County, Oklahoma Territory. Among those pursuing the killers were Deputy U.S. Marshal Warren Bennett and sheriffs from across Oklahoma Territory, including James Thompson, who remained Caddo County Sheriff until 1904.

While there is no absolute certainty that Thompson is the Sheriff pictured, according to the Caddo County, Oklahoma, Sheriffs Office, and the City of Anadarko Library historical archives, he is the most likely, as Broomhandle Mausers were readily available in the U.S. and the photo corresponds with the period when Annette Hume began doing much of her photography around Anadarko.

New York retailer Von Lengerke & Detmold continued to import various Mauser models (there were at least six early variations) until around 1910 and Mauser Broomhandles were also being distributed during this period through Browning Brothers in Ogden, Utah, (yes, that Browning), Iver Johnson, and through firearms stores in major U.S cities, thus it is likely that Oklahoma Sheriff John Thompson would have acquired his Broomhandle in the very early 1900s.

Aside from its 20th century role, the Broomhandle was also among the first and most innovative semi-auto pistols of the 19th century. Its origins date back to 1895 when Paul Mauser test fired the first example on March 15. The company, founded in 1871 by Paul (1838-1914) and his brother Wilhelm (1834-1882), was already one of the world’s most successful rifle makers by the 1890s.

Firearms historian Edward C. Ezell noted in his book, Handguns of the World, that most of the credit for creating the Broomhandle belongs to three of Mauser’s employees, Fidel, Friedrich, and Josef Feederie. Fidel was superintendent of the company’s experimental workshop and along with his brothers had been developing a self-loading pistol since 1893. As the 19th century neared its end, Paul Mauser came to the conclusion that the future of the handgun belonged to the self-loader and two years later, on December 11, 1895 received a patent for the Model C96. A new era in the story of the gun was about to unfold.

The Umarex Legends Mauser Broomhandle Model 712 with selective fire is perhaps the most remarkable and desirable of all original Broomhandle designs. The original C96 and all subsequent versions, including the Model 712, used a locked-breech design with a rectangular bolt housed inside the square section of the barrel extension. Beneath the bolt, attached to the barrel extension, was the locking piece comprised of a steel block with a locking lug that engaged a slot in the lower surface of the bolt. Sometime in late 1896, the bolt and locking piece were modified to have two corresponding slots and lugs. This design remained in use from 1896 to 1939.

In operation, the locking piece was raised and lowered as it moved along an inclined plane milled into the frame. The bolt, locking block and barrel extension recoiled together for a distance of about 5mm (0.2-inch) before the locking piece began to descend the ramp. As it dropped, the bolt was unlocked and permitted to continue its rearward travel separated from the barrel extension, at which time the spent shell casing was ejected and the hammer re-cocked. The recoil spring inside the bolt powered the closing stroke of the mechanism, which stripped and chambered the next cartridge from the gun’s magazine box, and as the bolt and barrel extension closed, the locking piece was forced up into the locked position by the inclined plane. The Umarex Model 712 operates essentially the same way except there is no empty shell case to eject and the bolt does not lock back after the last shot has been fired.

Among the Broomhandle’s many unprecedented features was a manual safety on the left rear of the frame actuated by pushing the lever upward into a notch, which either locked the hammer so that it could not be cocked, or if cocked, blocked the hammer’s forward movement. This is the original “cocked and locked.” There was also a wooden shoulder stock with a steel yoke that mounted into a channel cut into the gripstrap turning the Mauser into a carbine pistol. The hollow shoulder stock could also double as a holster that was carried in a leather shoulder harness.

The Umarex is based on the Model 712, which was the first Broomhandle model to employ a removable box magazine, as well as being fired either semi-auto or full-auto. Umarex has faithfully reproduced the Model 712 right down to the N R selective fire control switch on the left side of the frame, elevation adjustable rear sight, blowback bolt action and thumb safety operation. The gun is so exact in detail and dimensions that an original (or reproduction) Mauser wooden shoulder stock holster will not only fit the gun, but with the magazine removed, the gun will also fit inside the shoulder stock! 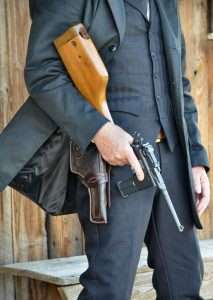 In Part 2 we will look at the features of the selective fire Umarex Model 712 and put a lot of .177 caliber steel BBs downrange.