Your Very Own Personal PDW

This is a story that begins with a bang, the sound of a .22 caliber rifle being fired. Over the past seven years the popularity of .22 LR copies of famous military handguns and rifles has grown exponentially as new models have become available, and there are more and more each year, mainly through the ingenious designers and manufactures at Umarex and their licensed reproductions of legendary arms like the Uzi Pistol and Carbine, the HK MP5, Colt AR-15 (and later variations), the HK 416 and Colt 1911 Government Model. It comes as no surprise then that Umarex has also done the same with .177 caliber models in recent years including the famous HK MP5 K-PDW (Personal Defense Weapon).

Their experience building the .22 LR models provided Umarex with ready platforms to adapt to .177 (4.5mm) caliber and at the top of the list is a variation of the famous HK MP5, the model K-PDW. There is one very good reason why I like the MP5 K-PDW .177 model; outside of military and law enforcement use it is very difficult to purchase one without a Class III Federal Firearms license. With BB gun designs exempt from NFA edicts, the same selective fire and SBR (short barrel rifle) designs used by military and law enforcement (and only allowed into civilian hands by application through an ATF Form 4, local law enforcement approval, a federal background check and a $200 tax stamp), are available in .177 caliber for less than the price of the tax stamp.

The earliest models were introduced by Heckler & Koch in 1964 to fulfill military contracts for a compact sub machinegun. There were five standard configurations, MP5 A1 without buttstock, A2 with fixed buttstock, A3 with collapsible buttstock, A4, a modified version of the A2, and A5, a variation of the A3 and the model that is most commonly recognized today as an MP5. Models later equipped with silencers for special operation were given an SD (schalldämpfer) suffix. The MP5-N, upon which the Umarex .22 is based, was developed for the U.S. Navy and used by Navy SEALS. In terms of design popularity copying the Navy SEAL model made the .22 caliber HK MP5, introduced in 2009, one of the coolest semi-auto rifles on the planet. It also gave Umarex the platform upon which to build its CO2-powered HK models.

The semi-auto .177 caliber PDW is authentic in almost every detail and loads and handles the same as the 9x19mm models. Folding stock, forend pistol grip, charging handle, ambidextrous safety, HK-style sights, (consisting of a rear drum and a front post installed in a hooded ring), this one has it all with an accurately sized 40 round capacity BB magazine. The MK5 K-PDW weighs in at a modest 57 ounces with its 6-inch barrel and has an overall length of 24.5 inches and 15.25 inches with the stock folded.

The CO2 loads into the back of the receiver by releasing the shoulder stock retaining pin, lowering the stock and inserting the CO2 cartridge. When you close the stock, you turn the seating screw at the back until you hear the CO2 cartridge being pierced. It is a time consuming process, but it keeps the lines of the gun clean and puts the CO2 right in line with the action. I was able to get an average of 180 rounds per CO2 cartridge.

Adding Optics for the Range Test 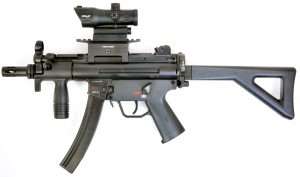 The MP5 design does not have an integral top rail, thus a rail must be added for optics. The Strike Systems MP5/G3 Series rail mounts to the top of the receiver and provides both a stable top mount for optics, a side rail for a tactical light, and a height that allows a clear under rail view of the HK’s adjustable sights. Optics are a good addition to the PDW since the HK-style rear sight does not use the original-style rotating diopters but notches, which, while effective, are more difficult to see. The rear sight is, however, adjustable for windage.

The Walther PS 55 is a military-styled red dot with a 30mm objective lens, red duplex reticle, seven brightness settings and an integral Weaver mount making it a quick attach and detach from the rail without tools. This is a high-end optic for an airgun (also used on the .22 caliber MP5 Models) but worth the price to dial in this .177 caliber H&K.

Trigger pull on the MP5 K is long, 0.94 inches with some moderate stacking, but it is very consistent with an average trigger pull of 10 lbs. 4 oz. With an average velocity of 400 fps, accuracy at a range of 10 meters (33 feet), and firing offhand using the Walther optics allowed me to dispatch 20 .177 caliber Umarex steel BBs into a cluster measuring 2.5 inches with a best 10 shots inside the 10 ring and X at 1.75 inches.

As an aside, an interesting phenomenon occurred during the range test; “wisps” appeared, that look like smoke emerging from the barrel, as would be seen with a cartridge-firing gun. This happened throughout the entire shooting session conducted two days ago when the temperature was 91 degrees with 85 percent humidity. And temperature and humidity is one of two reasons why you can have “wisps.”

Tom Gaylord wrote about this unusual effect in an Airgun Academy article, (/blog/2006/03/what-is-that-wisp-of-co2-at-the-muzzle/) which explains that the CO2 in the cartridge is in a liquid form until it is released, at which point it turns into a gas. Normally, when CO2 gas leaves the barrel you don’t see it. But if the outside temperature is high enough it can appear as smoke, or a “wisp” as Tom named it.  What exacty is it? When very cold CO2 gas hits very high external air temperatures it instantly condenses the moisture in the air around it and the vapor looks like smoke. The moister the air (high humidity) the more smoke is created, and 91 degrees with 85 percent humidity certainly does the job. I have to admit this has never happened to me before and being behind a CO2 pistol and seeing a smoking barrel is quite an airgun experience!