I took the WE MK16 out for a game this weekend, and thought I'd tell you a little bit about my adventures with it.  Actually, it wasn't just any game, it was the Echo1 Appreciation Day game at the Desert Fox MOUT Facility in Southern California that I announced in an earlier blog entry.

I'm the handsome fellow popping his head and gun up above the convoy truck on the right.  If you click on the image, and then click the magnifier, you can see the enlarged image, which gives a bit more detail in showing that I am in fact looking tactical hot with my MK16. 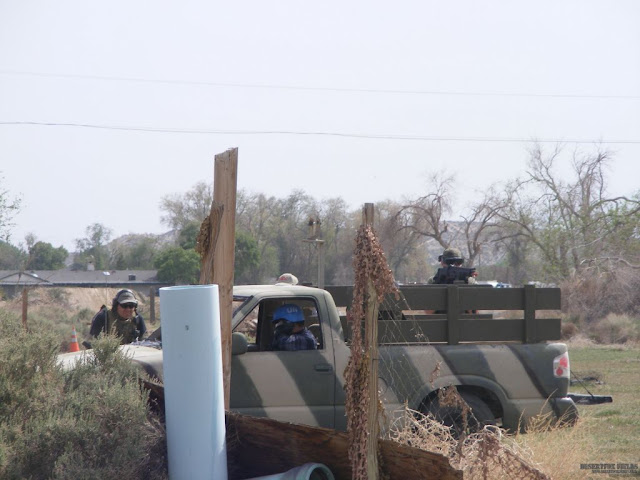 First off, firing this gun will get you noticed in the best way.  The kind of way where people want to be your friend, regardless of how sweaty you are or how bad you smell as a result of being so sweaty, just to be closer to your gun.  I suppose you might think that sounds like a pretty shallow friendship, based on the fact that one person is friends with the other purely for the purpose of getting a chance to see a WE GBBR (GBBR = Gas Blowback Rifle) in action.  However, a friendship based on Airsoft replicas is thicker than replica blood.

This is the perfect choice for anyone like me who enjoys the spotlight.  People will notice the awesome glory of its performance and will then proceed to ask you about it.  They will want to know if the recoil feels like the kick of shooting a real steel .22 or not.  Without ever having shot a .22, my guess would be, "probably."  They will want to see it shoot or ideally, shoot it themselves.  If you're feeling remotely Roosevelt, I suggest you let them try it for themselves.  It's the only way to truly demonstrate how legit this gun is.  Let's just say I made some new friends.

I found this gun to be accurate enough that I could aim it at a tango anywhere between 20 to 40 yards away and without being able to see the flight of some of my BBs (I was using the clear Bioval .27s in a shaded area), I could expect them to find their mark.  And they did.  A lot.  It also helps that most of the players at the game were calling their hits.

Another note:  A couple friends of mine, plus my brother, were out at the game with me.  One of said friends has heard of the WE MK16 Airsoftasticness for several weeks now but had yet to see it being fired.  I kept telling him, "Dude, you need to shoot this thing.  It will blow(back) your mind."  Sometimes my own cleverness (or lack thereof) astounds me.  All he could say was that he just really hates the SCAR because of the way it looks.  I could sympathize because I'm not crazy about the look of the gun either, but as soon as I fired it for the first time, I couldn't care less what the thing looked like.  I was hooked.  So...I had him test-fire it.  I handed him the gun, and said to put a few down range.  I had it switched to full auto, which I'm not sure he noticed nor was he prepared for.  He pulled the trigger, which resulted in a 3- to 4-round burst of Airsoft Win.  He just started laughing and shook his head, then turned to me, used some expletives to describe his excitement, switched the rifle to semi-auto and continued firing.  Judges ruling: there is a new member in the WE GBBR fan club.

Here's another reason why I had fun with the WE MK16 last weekend:  It didn't break down like some of my AEGs did.  It functioned flawlessly.  No jams.  No dry-fires, no NUTHIN! My only issue was that I'll need to pick up some additional mags, because the three current mags I have at 30 rounds each won't last you too long in a game with 120 players or more.  I did try to choose my shots much more carefully than I would have if I was running an RPK with a 3000-round drum mag but still, I'm not that good of a shooter, the gun is not that accurate, and not everyone called their hit the first time they were shot.  Sometimes, it would take one or two extra shots to get them to realize that I had them dialed into my sights.

There's me on the right, brother on the left, securing the convoy's exfill route in the 2nd game.  The WE MK16 is slung on my back (you can barely see the orange tip sticking out behind me if you click on the image to enlarge it) because I had run out of ammo at that point and had switched to my lovely TSD M11, which is a whole other animal that I'll be covering later. 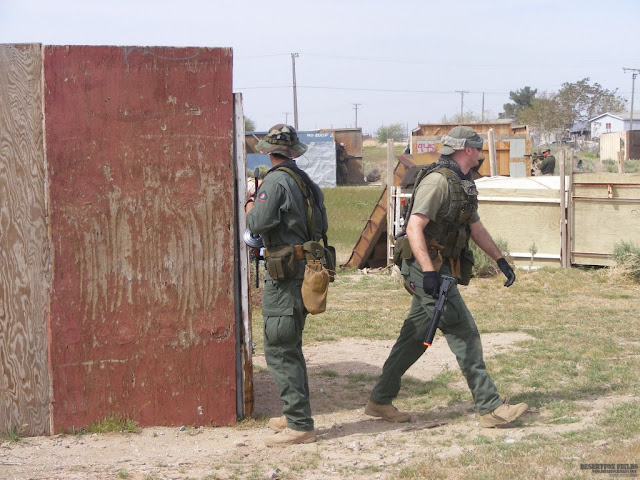 Image Credit: GI Jones, Desert Fox Fields
Bottom Line: I had a metric ton of fun playing with the WE MK16 GBBR this weekend.  It performed extremely well, resulting in many dead tangos, AND people saw how cool it was when I was shooting it and were no doubt envious of my possession.

SPECIAL ANNOUNCEMENT: If you like your guns to come in Tan, then I've got great news...

Pyramyd Air is now carrying the very sexy Tan version (or Flat Dark Earth/FDE) of the WE AWSS MK16.

Truth be told, I want one in every color. Even pink. Real men rock pink.

It felt great to get back into games this weekend after a four-month dryspell (stupid tax season), and the WE MK16 was very instrumental in helping me enjoy my time out on the field.