I've got a buddy in the Army who once told me that, "there's nothing wrong with going native."  Frankly, after seeing this latest piece in person, I'd have to agree.  Therefore, I would like to introduce you to the RPK from TSD and SRC.  Hello, Ms. Lady! 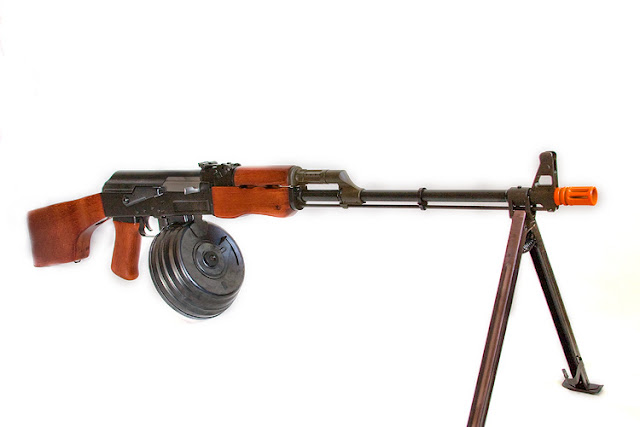 Ordering Info:
I picked this rifle up from Pyramyd Air a little while ago.  As per my usual SOP, I went for the free shipping and ordered before 12 Post Meridian, Eastern Standard Time so that it would ship out that day.  Pyramyd never fails me.  Got it in the mail about 4 or 5 business days later.

Here is the direct link to the product page where you can order yours: 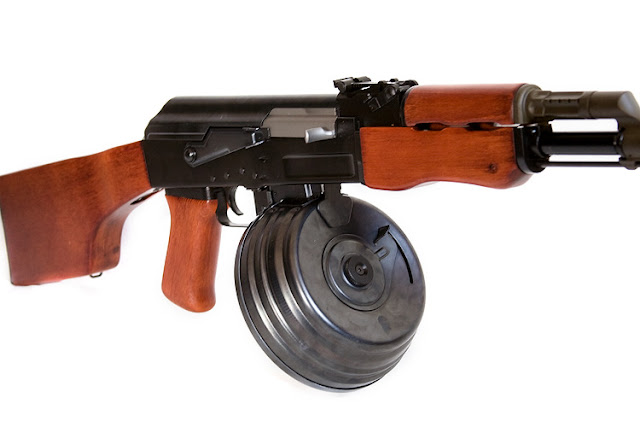 Here's a little background info to wet your appetite.  Thanks to the fine folks at Wikipedia and World.Guns.Ru for the use of the following content, which I have slightly modified in a vain effort to seem vaguely witty and humorous:

The RPK is a 7.62x39mm light machine gun of Soviet design, developed in the late 1950s by this champ: 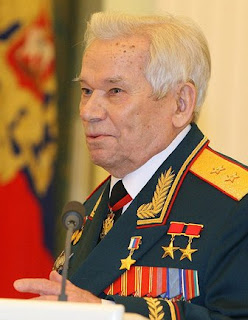 Image Credit: www.kremlin.ru
I don't know if you know this, but that guy (you know, the one I just pictured for you) is kind of a big deal.  He probably has many leather-bound books and his apartment probably smells of rich mahogany.  People know him.

It (the RPK) was created as part of a program designed to standardize the small arms inventory of the Red Army, where it replaced the 7.62x39mm RPD light machine gun. The RPK continues to be used by the armed forces of countries of the former Soviet Union and certain African and Asian nations. The RPK was also manufactured in Bulgaria and Romania or whatever.

Enough chit chat. Let's get back to this Airsoft rifle. The package arrived at my office (that way I know there will be someone there to sign for it, rather than have it sent to my home, where they might just leave it on my doorstep where some shadeball jerk might steal it). There was absolutely no way I was going to be able to wait until 5pm to un-box it. I had to have a look, even if it was just a quick peek and then go back to work. So I pulled it from the packaging, removed the box top and

PROCEEDED TO HAVE MY MIND BLOWN.

I was not prepared in the least for what that long box of glory beheld. Inside was an absolutely gorgeous Airsoft gun. And very long. TWSS. Seriously. Look at this thing! 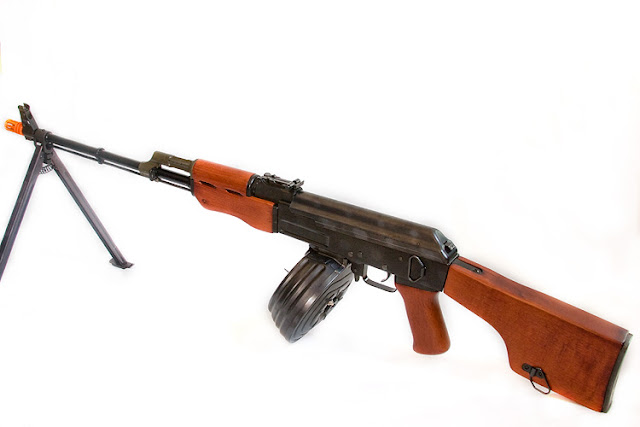 I mean, c'mon now. A metal body with real wood furniture with a very nice red-ish coloring to it?!?!?!? I'm telling you, while the gun may look good in these phenomenal photos (thanks to my baby's mama), they still do the rifle no justice.  It's quite breath-taking to look at.  TWSS.  It's an absolute beast.  TWSS.  Probably as long, if not a smidge longer than my Marui M14.  TWSS. 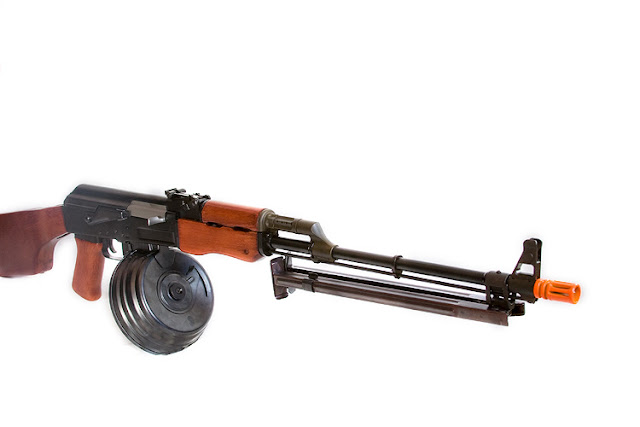 So let's talk a few specifics:

First off, you'll notice I dropped not one, but two manufacturer names earlier.  That's cuz like TSD & SRC like worked together and stuff.  Between the metal receiver, barrel & bipod to the wood hand-guard, pistol grip and stock, I guess they were pretty serious about making a nice gun. 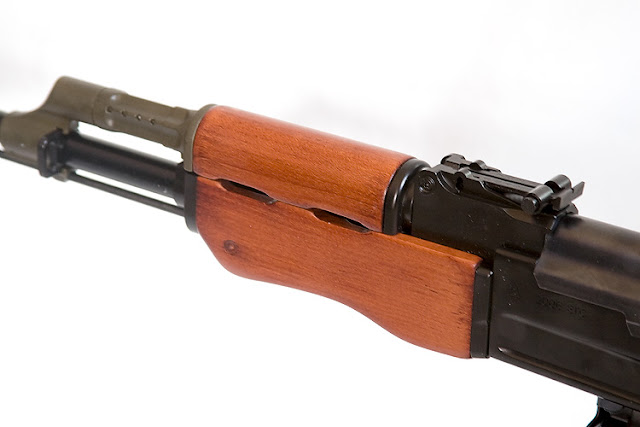 Here's a close-up of the RPK's adjustable rear sight. 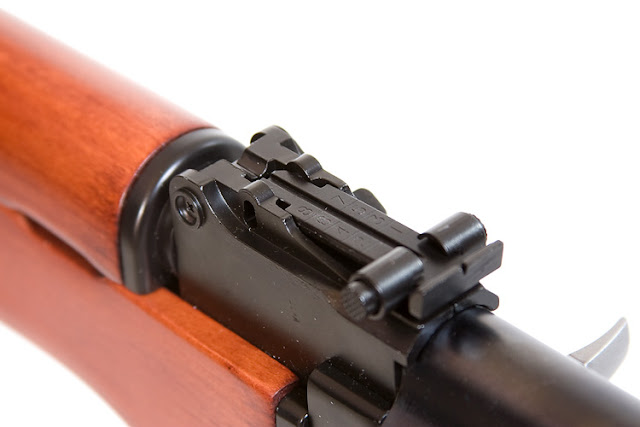 Shot of the Right Side.  Pull the silvery/grey bolt cover back to adjust the hop-up.  Also in view is the fire selector, located directly above the trigger.  Currently, it's in safe mode.  One notch down is full-auto, and the 2nd notch down is semi.  Note the gun goes from safe to full auto, unlike most M4s and many others who go from safe to semi. 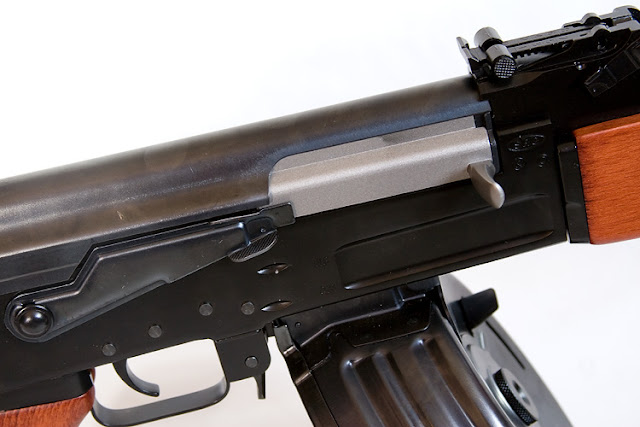 Pictured below is the 600 round, metal AK mag as well as the 3000-round, motorized metal drum mag.  The drum mag operates on 4 AAA batteries which are not included (lame).  C'mon TSD/SRC.  I drop almost 400 bucks on a gun and you don't include the stinkin batteries so I can plug and play right out of the box?  Actually, I don't really care that much.  I just wanted to sound opinionated and controversial.  I've made it a point to situate the drum mag so that you could see the top of it, where it gets inserted into the magwell.  If you own AKs from several different manufacturers, you may notice the similarities between this mag and the mags of your other AKs.  That is because,  chances are, they are the compatible.  At least with Classic Army and ICS AKs, anyway.  How do I know this?  Because I own an ICS AK74 and tried it.  Then I tested the drum mag in my brother's Classic Army AK.  Both times were successful matches.  Not only do they fit in the other rifles, but they also fed BBs without any dry-firing. 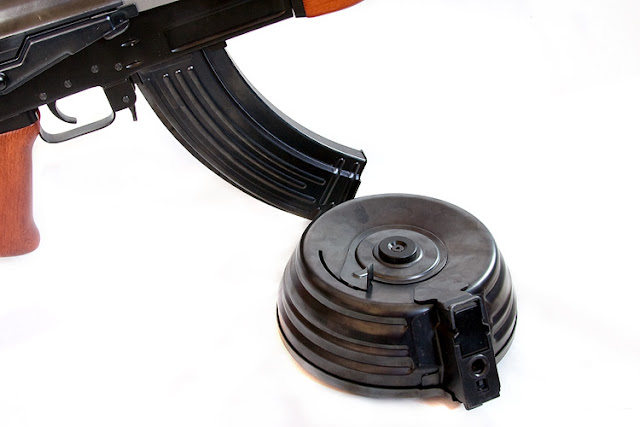 Next up is just a shot to show the back of the drum mag, where the winding button is. 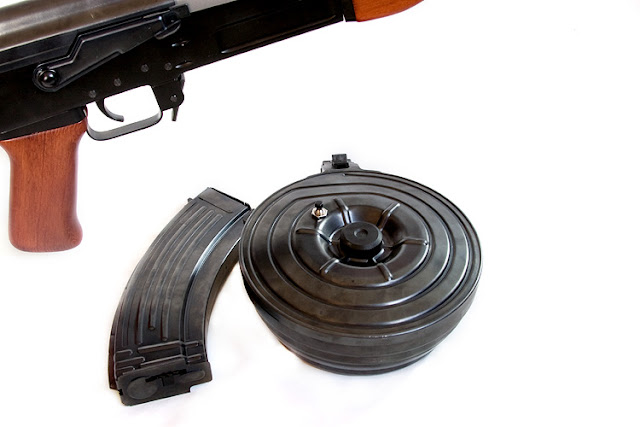 Let's talk briefly about the internals before I wrap this thing up for now.

The RPK has a Marui-compatible, version 3 metal gearbox typical of most AKs on the market, which is nice for upgrading. Steel gears come standard, as well as steel bushings (always a plus).  The motor is an SRC Ultra-Torque, which when paired with the M110 spring and a high voltage battery, should provide you with a very nice rate of fire. Additionally, the manufacturers have included a ported piston head to help enhance cylinder compression.  Having an air tight seal in your cylinder will give you much more consistent velocity from shot to shot.  Consistent velocity means better accuracy and better accuracy means happy Airsofters.  And who doesn't love a happy Airsofter?!

That concludes this review for now.  However, there's still more to come that includes some exciting/thrilling/mesmerizing chrono results and some video demonstrations of the rate of fire when using an 11.1 volt lithium polymer battery.