Dissassembly Guide for the WE 1911 Airsoft Gas Blowback Pistols 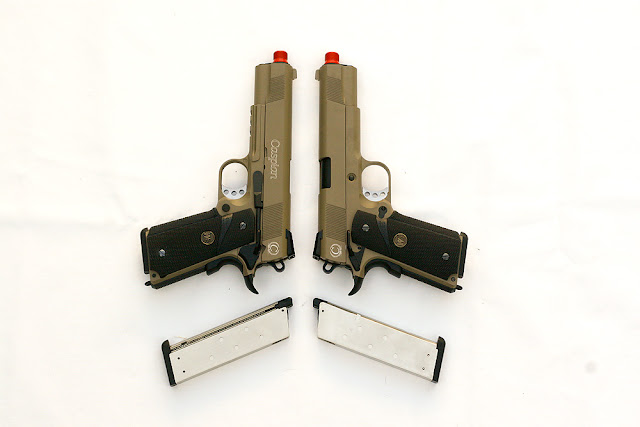 Wassup?
How was your day?
Cool. Glad to hear it went well.  Although, if I had to guess, I'd say it's about to get better.
I'm going to take you inside the mind of a WE 1911 Airsoft Gas Blowback Pistol today/tonight/right now.

This will serve as a basic guide to taking your beloved GBB apart for any number of reasons.  Maybe yours decided to take a dump on you in the middle of a game because the piston o-ring blew out, or maybe the slide sticks, or maybe you just want to adjust the hop-up a bit or MAYBE it works perfectly, but you're an obsessive tinkerer that insists on taking things apart in an attempt to improve the gun's performance, but instead make the gun perform worse than it did before you ripped it apart and subsequently ruined it.  That last one has TOTALLY never HAPPENED to me.  Honest as Enron, I swear.

1st off, pull the slide back just enough to line up the notch on the black slide catch with the small groove in the slide.  This will allow you to pop the slide catch out and release the slide from the lower frame. 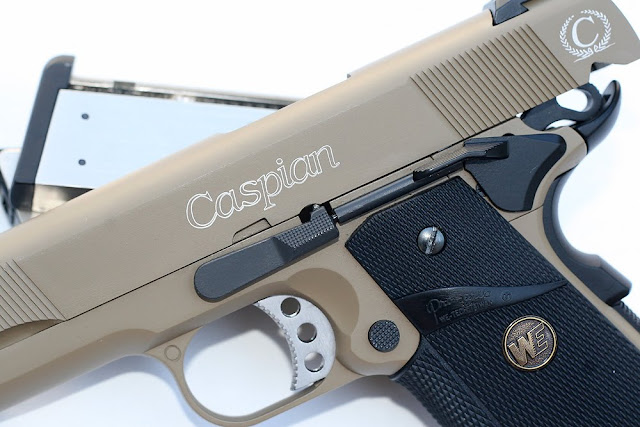 In order to pop the slide catch out, you'll need to hold the slide in the position it's in in the above pic, while you simultaneously press the black button above the trigger in the image below. 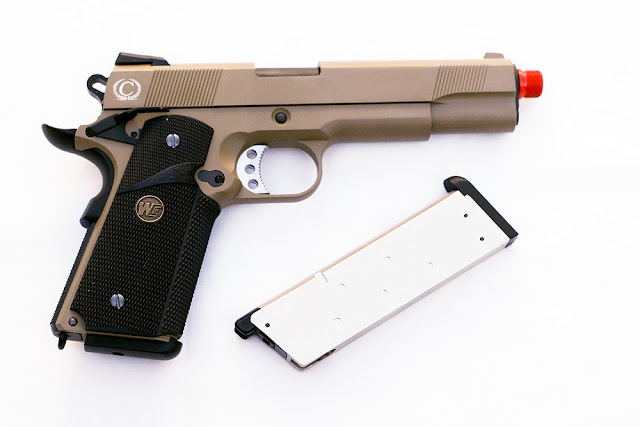 In the next pic, you'll notice I've popped the slide catch out and consequently, the slide has been released and slid forward. 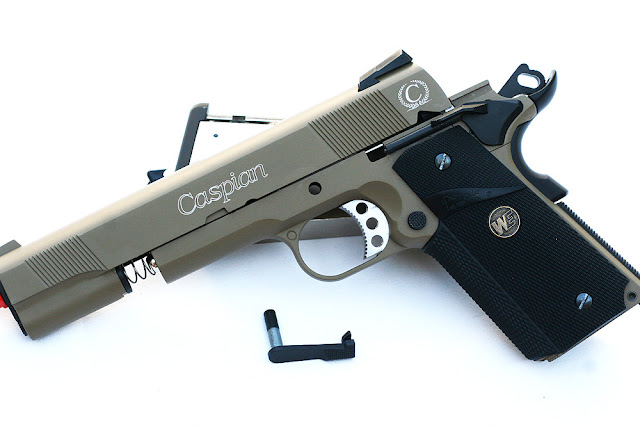 So I know this next situation looks bad, but you've got to realize that when the gun is fully assembled, the inside of the lower frame in front of the trigger guard acts as a sort of secondary spring guide, keeping that rod in line.  I have yet to have an issue with any of my many WE 1911s that utilize this design.  Just to the right of the spring guide rod, you can see the adjustable hop-up wheel, among other things.  Not pictured here, but if you had your own WE 1911 (everyone should have at least one) to look at, you could look closely and see that on the wheel, WE has gone ahead and indicated which direction turns the hop-up on and which direction turns it off (basically the opposite direction that turns it on, genius). 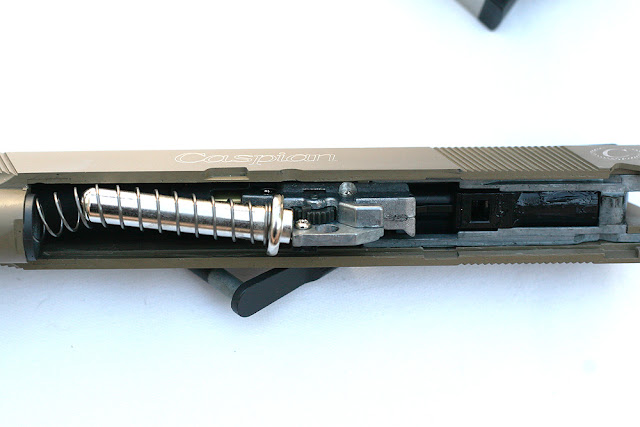 From here on out, I'm just going to let the pictures do the talking.  If you are you able to figure out what's going on from my photo tutorial, then please send your praise this direction.  If you are UNable to figure it out, please direct your complaints at your therapist.  I am not in the mood to be accepting blame or criticism today. 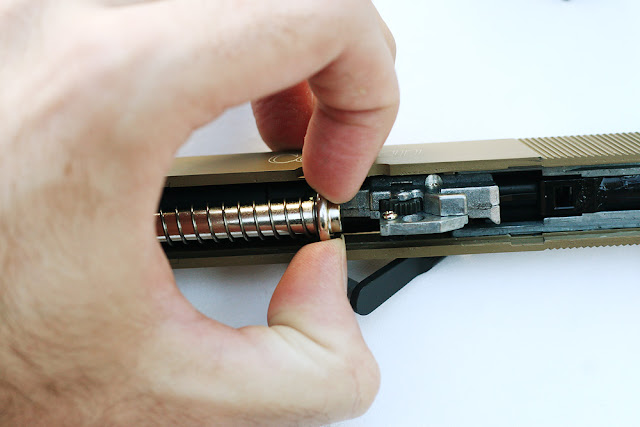 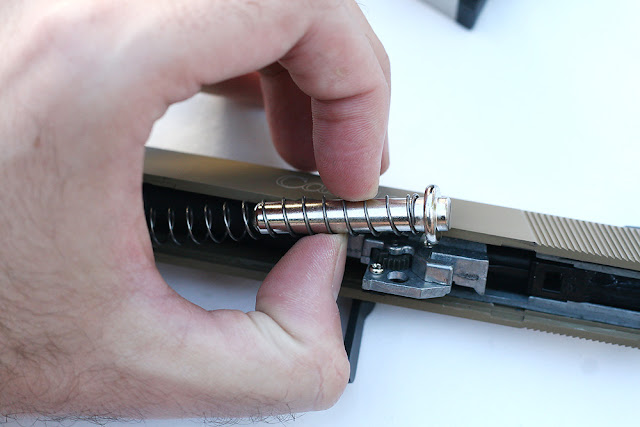 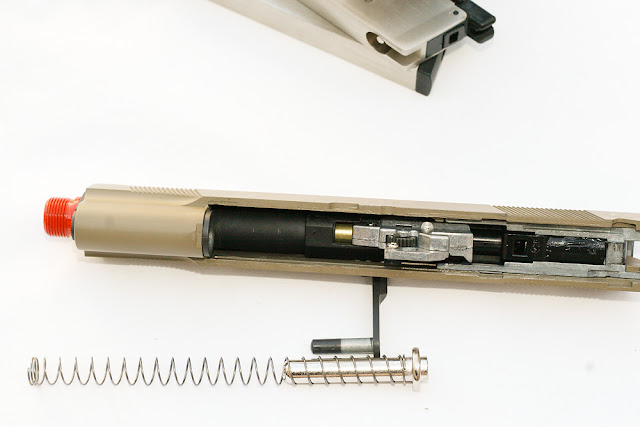 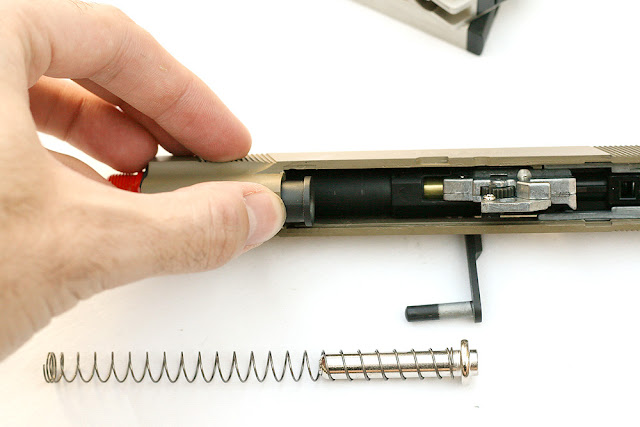 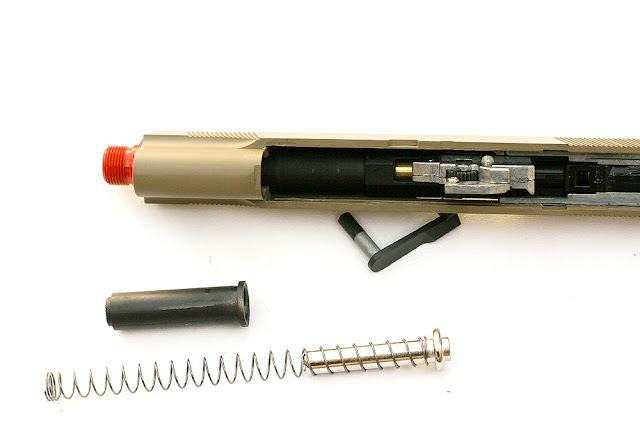 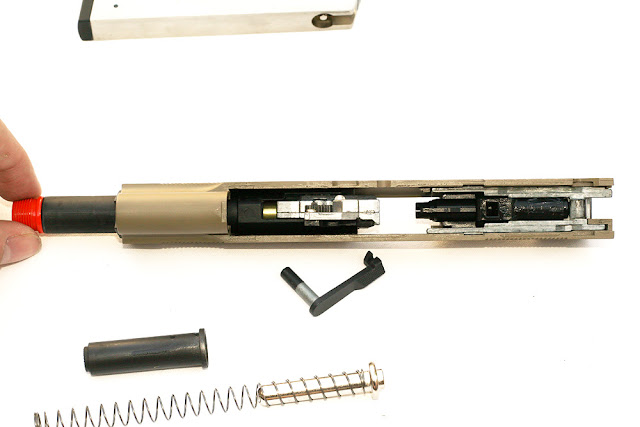 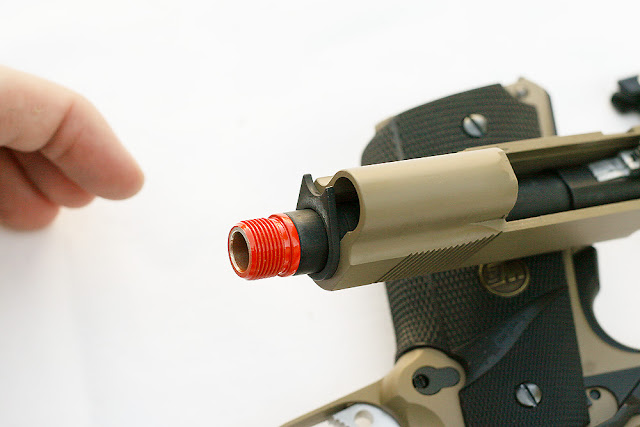 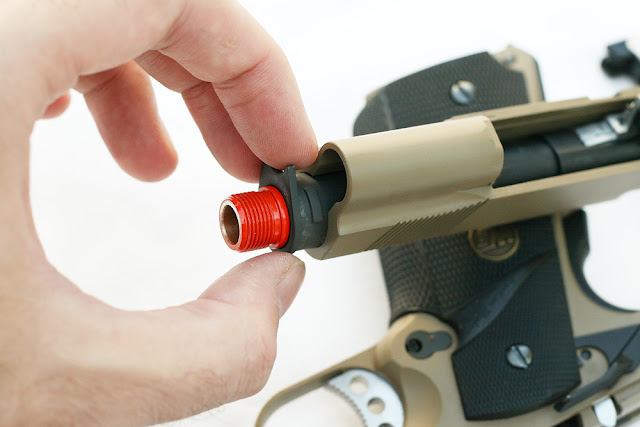 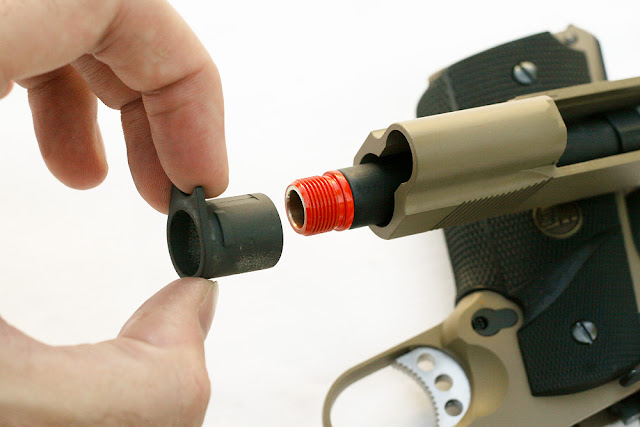 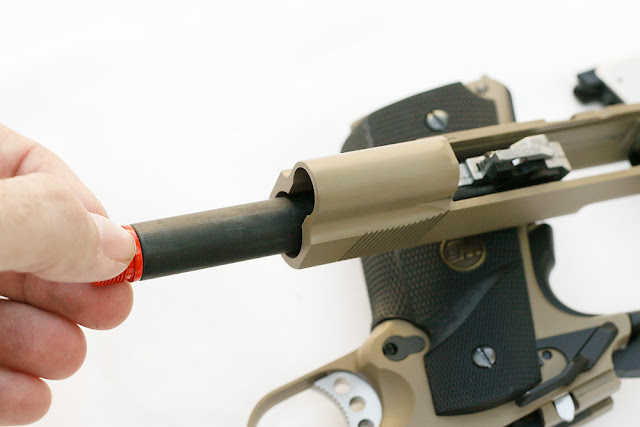 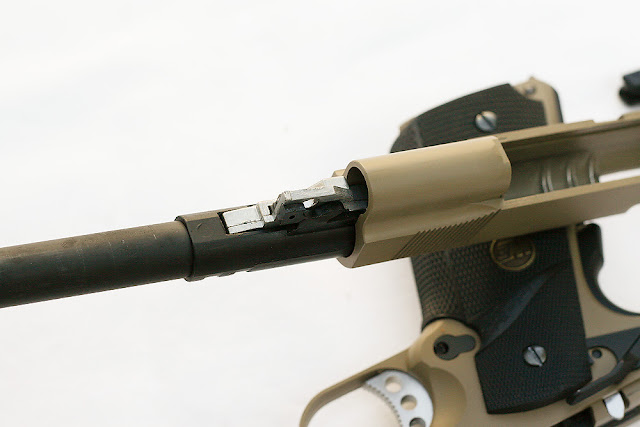 ...
I will step in for a brief moment to explain these next two images.  In the image below, I'd like you to look at the black hex screw below the rear sight.  In order to access the pistol o-ring and other parts inside the loading nozzle, you'll need to remove this screw. 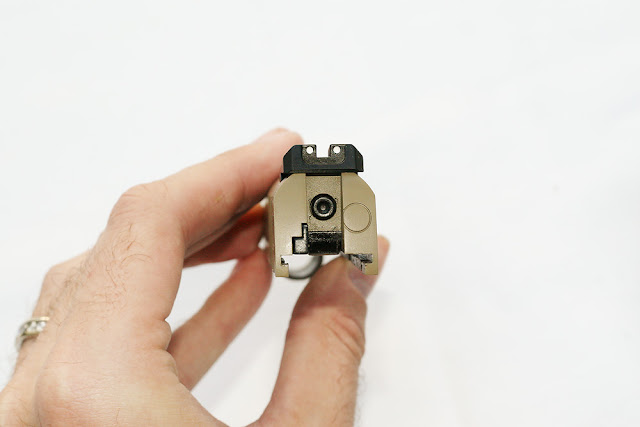 ...
Additionally, you will also need to remove the screw that secures the rear sight.  This screw also helps to secure the blowback unit. 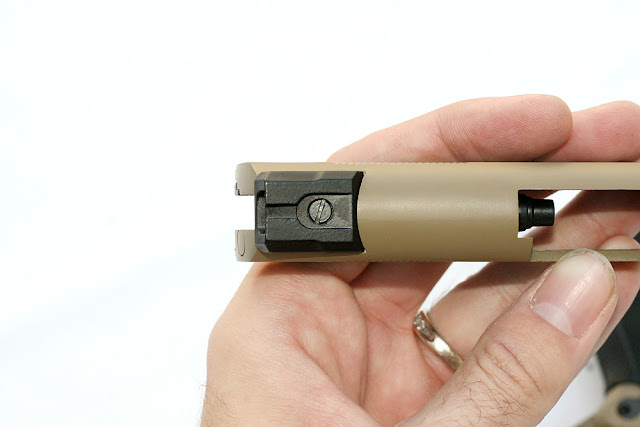 Once you remove both of those screws, you'll be able to pull the blowback unit out and take it apart.  Be sure not to lose the tiny loading nozzle spring that sits in between the top of the blowback unit and the inside of the slide.  Basically, almost right underneath where the rear sight sits.  This spring is replaceable, but try not to lose it because it will cost you more than you will want to pay for a super tiny spring.

Here, I show you the outer barrel and hop-up assembly.  If you look closely, towards the bottom of the grey/metal  hop-up chamber, you can see a tiny screw just to the left of the circular hole.  In order to get to the hop-up rubber in order to either replace it or just seal it with something like Teflon tape or whatever you think works best, you will need to remove this screw. 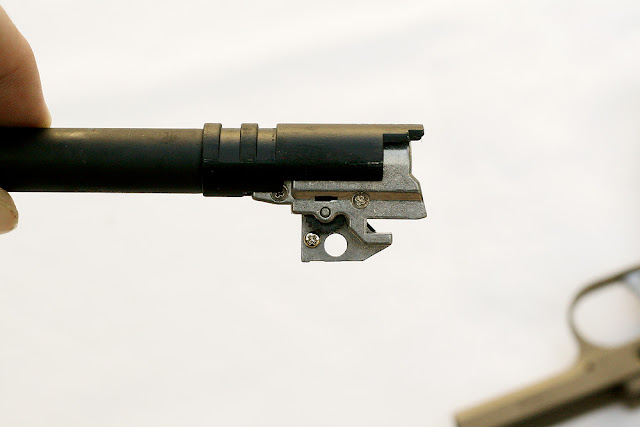 ...BUT WAIT...easy, Rod (see Super Troopers for clarification on that).

On the back side of that screw, is a tiny black piece of plastic that keeps the hop-up/inner barrel secure inside the outer barrel.  Do not lose this piece.  You will probably have to make your own from scratch if you lose it, because I'm pretty sure it's not replaceable otherwise. 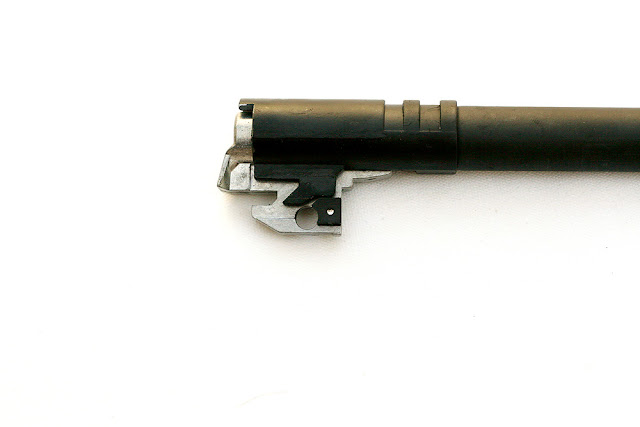 This is what the inside of the inner barrel looks like with the hop-up turned on a bit.  Notice the flat line at the top of the circle, essentially making it NOT a circle. 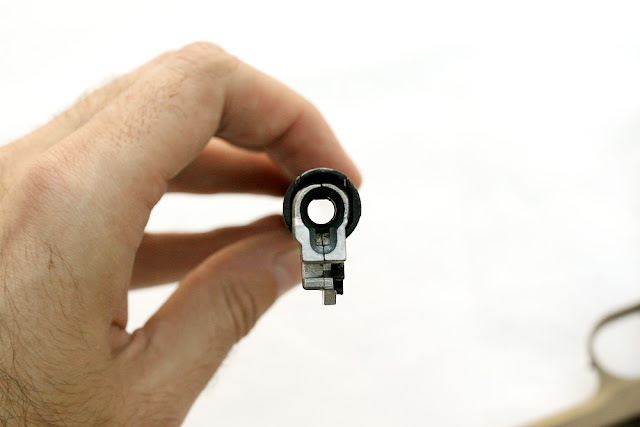