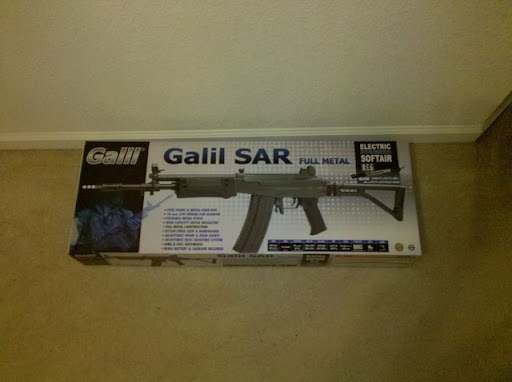 If I were young and foolish, I would overlook the Cybergun Galil SAR as being a sweet AEG. Luckily, I'm bald and wear glasses, which automatically makes me much smarter than the average Airsofter my age. It's science. Anyway, I'm glad I picked this one up. I've always been a fan of the Galil SAR but never had the cash to pony up the premium for the King Arms model. Lucky for me, Cybergun decided to make a nice replica at a much more affordable price ($197 @ Pyramyd Air).

So, as you see to the right, I took a picture of the Galil, still inside the box. I used my camera phone in low, unnatural light because I was too lazy to get the 30D out and play for realz. Just like when Justin told Britney, cry me a river.

I will only subject you to one more poor quality image, before I treat you to some super sweet Airsoft eye candy. 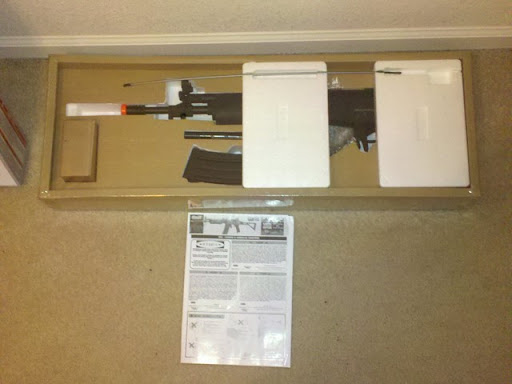 There. It's done. It's over. That wasn't so bad, was it? I was just trying to show you what this baby looks like when she's all bundled up and ready from transport. Truth be told, this picture looks a lot better, but it would seem that Goggle's Picasa conversion/uploading system has taken some unfortunate liberties to make a poopy photo into the Hershey squirts. No good. Sorry. It's all I've got.

Let's just try and move on to greener pastures.  I'm starting bum myself out on the blurriness.

If I may take a moment to be profound, basically, the gun comes in a box. 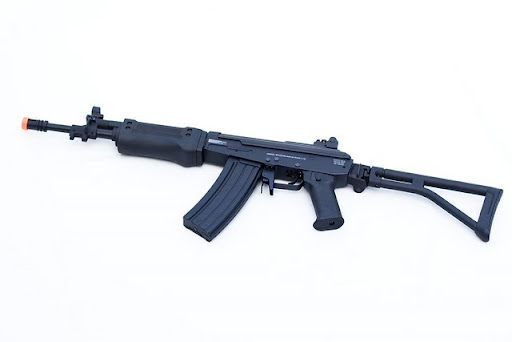 I just rocked your world, did I not? Tell me something...how do YOU spell "win"?


I spell it G-A-L-I-L.
Let's take a walk through the Airsoft world of one of the Israeli Weapon Industries' more attractive  pieces. 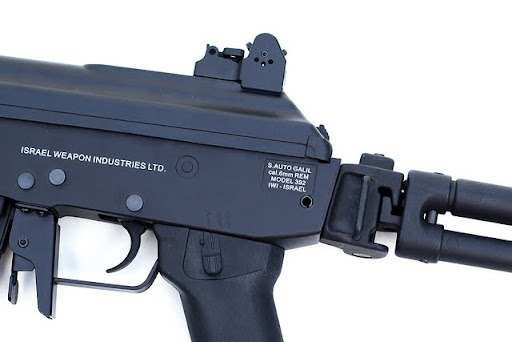 First off, you may recognize this weapon as being a replica of the ones the uber leet, yet oh-so-uber-evil South African quasi-D3LT4 operators were using in the instant classic, District 9.


Aside from making you look cool, the Cybergun Galil SAR has some other nice features to it as well.  For example, it has a very nice trigger pull.  Normally, I don't even comment on a stock AEG's trigger pull because they are never anything to change your shorts over.  However, this trigger gets me a little antsy.  It's quite lovely. 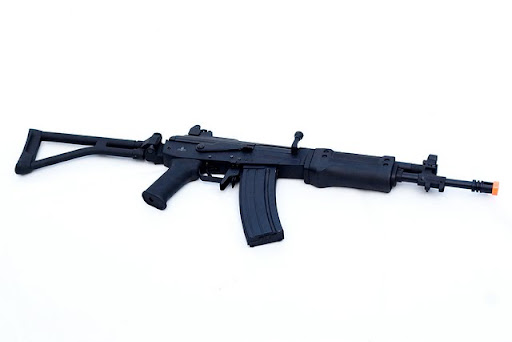 I should note that for those of you that like this sort of thing, the majority of the Galil's body is composed of metal parts.  I think both the grip and the hand guard are the only major plastic parts.  They feel like they've got a nice polymer texture though, which prevents it from feeling or looking like a cheapsoft gun. 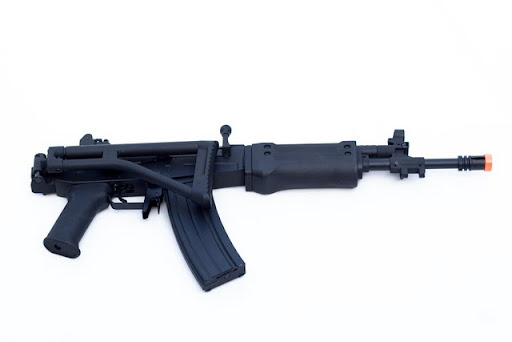 Additionally, it's got a pretty sweet spring-locking, folding stock for converting to an effective CQB platform. 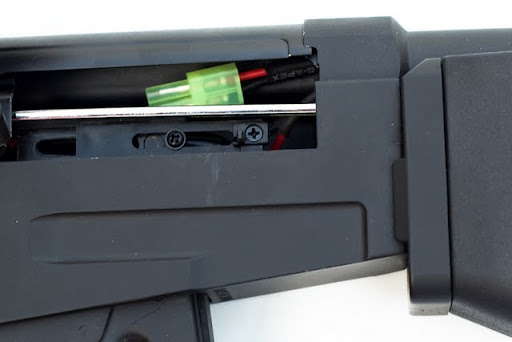 See that charging handle poking out up top in the photo above?  That thing pulls what I'm gonna call the bolt or dust cover back to allow you access to the hop-up.

You can all see that the gun is currently wired to have the battery sit inside that tiny little area on top of the gearbox.  You will definitely need a stick/wand-type battery to fit inside this tiny space.  I was able to fit one of those 1200 mAh Li-Po rectangular stick batteries in there, however, I have to pop off the top plate (which is quite easy to do if you've ever seen or done so on an AK.  It's the same setup).  However, if you're not into Li-Pos or have weird issues with removing the bolt cover, I'd suggest one of these batteries, since it's probably going to be your only option if you want to keep the gun's wiring configuration in its stock form.

This is an Intellect 8.4V NiMH stick battery designed specifically for AK-type AEGs & similar variants like the Galil. If you're just going to use the stupid Tamiya connectors that come on every stock Airsoft AEG on the market, keep in mind, they are the smaller kind, so your battery with the large-type Tamiya connector will FAIL. Hard. As in, it will not connect. It will NOT pass go and most certainly will not get to rescue the princess from the castle. Use your head.

Stay in school and wash your hands subsequent to waste excretion, whether in a "water closet" or outside behind your neighbor's house at 3 am on a Tuesday.

I've popped the lid off this 6mm pee shooter to illustrate the battery-space situation. 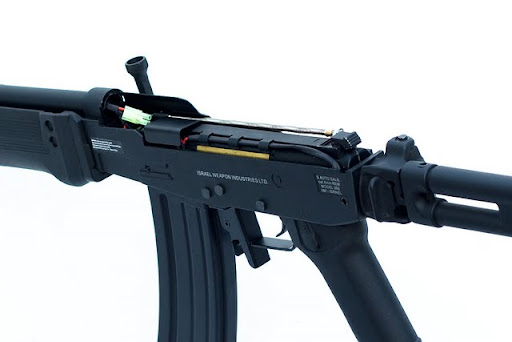 You can see that there's enough space in there to party, but not enough to go all night, like one might do in a little town called, "THE Vegas."

Upon a brief visual inspection of the space inside the hand guard, one savvy Airsoft tech may be able to wire the gun into the internal space provided, to allow the use of slightly larger batteries. However, I have yet to confirm whether, A, there is enough space or B, removing said hand guard to insert the battery is easy to do or a PITA. There is certainly a chance that there isn't really that much more room inside the hand guard than there is inside the current battery area in the upper receiver.


You might be wondering what's going on in the rear. I know I am. TWSS.

Here's a view from behind. I enjoy this point of view. Whilst you enjoy the finer details of this photo, be sure to note that technically, you've got three options for the rear sight. The farthest back sight has two different size holes to help you pinpoint your target. Like the front sights, if that doesn't do it for you, you can use the flip-up white dot field goal-esque sight. Your choice. 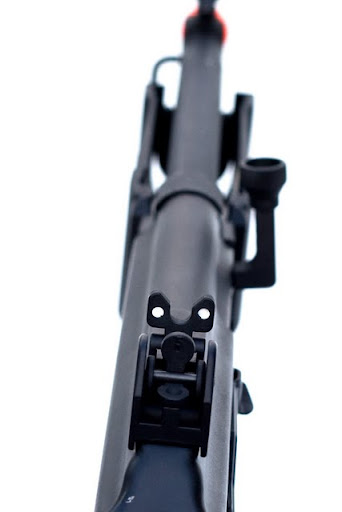 So here's what the selector looks like, which is located on the right side of the receiver. The more astute observer will see that the letters indicating the current firing mode spell out SAR when strung together. Weird. 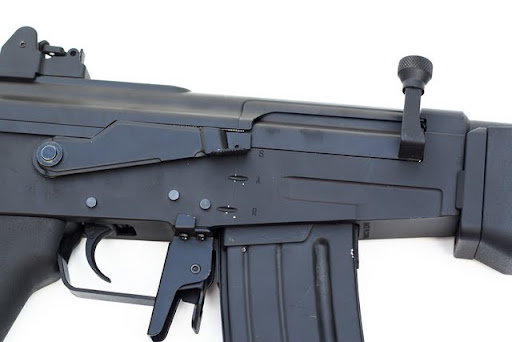 I've already taken the Cybergun Galil SAR Airsoft AEG for spin at the Desert Fox MOUT Facility field in Southern California and let me tell you, I had a good time! The gun is definitely accurate enough for an outdoor MOUT environment, and like I said earlier, the trigger pull is quite nice, making it easy to drop a bunch of rounds down range. This reduces the risk of developing a rare, but serious condition known as TFFS (Trigger-Finger Fatigue Syndrome).