The Grand Finale (Part I)
(As Opposed to The Grand Lebowski) 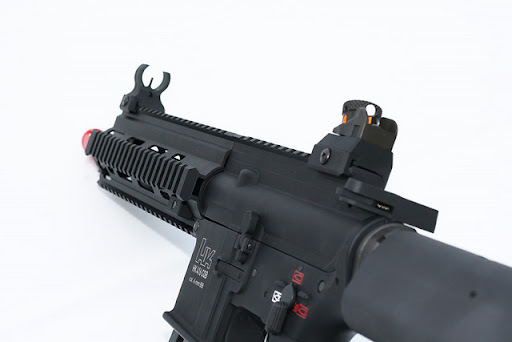 If you're just seeing this review for the first time, you can play "Catch-Up" by reviewing
The Entire VFC HK416 CQB Pyramyd Airsoft Blog Review Thread

Before I show you the feature film of the finished product, there's a few things I'll need to go over.

First, it need NOT be mentioned that my cinematography skills leave a lot to be desired.

I ALREADY KNOW THEY SUCK. 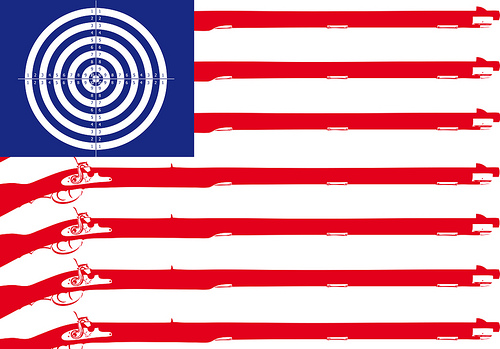 Image used with permission from the NRA,
which I think was pretty "Roosevelt" of them. However, I not only pledge my allegiance to the Flag of the United States of America and to the Republic for which it stands, as one nation under God, but also to the pursuit of improving the quality of any videos I may or may not bestow upon you in the future.  Please be patient with me, I'm not ready to remove the training wheels just yet, so to speak.

***Secondly, there was an incident that occurred in the background whilst I was filming this beautiful disaster of a video.  I'll let you view the footage first to see if you even notice it, and then I'll clue in any of those who remain clueless after the video break.  It wasn't a big deal in the least because of the informal nature of the film, but nonetheless, it was an incident, regardless of how minor.

Third, speaking of training wheels, I can also promise you that as I produce more and more of these videos, I'll get progressively more and more entertaining to listen to and/or watch on camera.  I realize I sound like a "droll troll," if you will, in the films I've made thus far.  I'M WORKING ON IT!!!!

Alright, enough with the hot air.  As they say in a certain San Fernando Valley-based industry, here's the money shot.

In a nutshell, that's my newly-custom, VFC HK416 CQB AEG that I picked up from Pyramyd Air.I think I love her.

***Did you catch what happened?  Most of you probably did.  Sophie, who is one of my two Miniature Pinschers, thinks she's some sort of canine diva and loves to work the camera.  She got wind of me filming a subject that in no way involved her and opted to come outside to voice her protest to such a violation of her trust.  I then turned behind me, where she was throwing her tantrum, and had to snap at her, signaling I would metaphorically whoop her 7-pound butt if she maintained her current course of action.  Needless to say, she had her attorneys on the phone immediately and were putting together a case against me, regarding an alleged breach of contract for failure to include Sophie in any and all photographs or video footage captured on my watch.  I don't recall an agreement to any such contract ever occurring, but I decided to settle out of court for a soon-to-be disclosed amount in an effort to salvage our now strained relationship.

Who's gonna protect the protector? 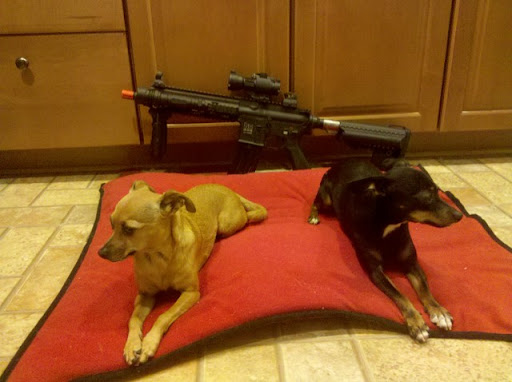 I think these two Min Pins are up to the task. Sophie's has taken up the right sector (the viewer's left), Violet's on the left (the viewer's right), the VFC HK416 Airsoft Rifle pulling rear security, with each of the three doing her darnedest to look "hard" in the presence of the others. I think I'll title this pic, "Three Good-Lookin' Fräuleins Ready to Ruin Someone's Day."

Sophie and Violet make for excellent guardians of the HK416 and the rest of my Airsoft arsenal. Their barks are extremely sharp, occasionally shrill and they're able to project those vocals at eardrum-piercing decibel levels to alert anyone within a quarter mile that they have assessed a situation and detected what they consider to be a threat. Gotta love that German efficiency!

The terms of the breach of contract settlement between Sophie and I were that as an order of specific performance, I would photograph the two Min Pins striking an intimidating pose, and then feature said photo (see above) on the Pyramyd Airsoft Blog.  The terms also specified that I place an attractive, high-performance Airsoft AEG in the background of the photo.  The AEG must not only possess all of the aforementioned attributes, it must also replicate a real steel assault rifle of German descent, as they themselves hail from "ze Deutschland." Naturally, without an ounce of hesitation, I knew that the only German Airsoft AEG replica of sufficient for this situation was, of course, the Heckler & Koch 416 Select-Fire Assault Rifle, manufactured by Vega Force Company (VFC).

In return, as consideration for my specific performance, Sophie agreed not to pee on the carpet for the next 6 days. You'd think that would be a pre-existing legal duty for her to "abstain from staining" (see what I did there?), but these Min Pins apparently run by a different set of rules.  Lucky for Violet, she was merely an uninvolved, third-party beneficiary of sorts to this agreement and was thereby not bound by the terms of the consideration.  There is just no way she could go 144 hours (6 days, each consisting of a 24-hour period, Professor) without giving my carpet a thorough soiling.  What can I say?  They are wonderful, tiny German dogs who pee where they are not supposed to.


Now for the next blog, how's about we get out of that dirty little nutshell and get into a recap of the finer, more cleanly details of the procedures I performed internally and externally that resulted in such an epic VFC HK416 CQB Airsoft WIN.

For now, I'll leave you with one of the great riddles of our time:

How much wood could a woodchuck chuck, if a woodchuck ordered a VFC HK416 AEG from Pyramyd Air and subsequently lit that wood up with said Airsoft HK416 on full-auto from 10ft?

Think about it and let me know your thoughts in the comments section.
Newer Post Older Post Home