When I'm not thinking about Airsoft, I'm usually not alive at the moment. Although, sometimes I AM alive and I think about airsoft and Velociraptors simultaneously. Like what would happen if a Velociraptor taught himself how to operate the crap out of a highly upgraded and finely tuned, Classic Army Dragunov? I mean, seriously!!! We'd all be screwed. Properly.

While the CA Dragunov is not the subject of today's post, I did think it pertinent to give you an ever-so-brief glimpse into the inner workings of my thinking muscle.


No, while a Velociraptor with a Dragunov is certainly a serious issue, there's another serious issue I'd like to discuss with you today (aside from the Dragunov and the fact that Google's "Blogger" does not recognize the word "Dragunov" in its spell-checker, which is, to say the very least, an atrocious fail). That issue is the use of Tamiya connectors on your Airsoft AEG, and in this case, on the VFC HK416 CQB that I've been swooning over for the last week or two. I assume that the Airsoft AEG manufacturers overseas use Tamiya connectors because they are the most cost-effective (read: the cheapest). There is just no way in purgatory that anyone will convince me that Tamiya connectors are better to use than Deans for ANY reason, save one: As you will see and read about below, they are easier to install on the end of a set of bare-tipped wires than Deans. Other than installation, they are freaking AWFUL. Wanna know why? NO!?!?! Well I don't care, I'm going to to tell you anyway. First of all, I have melted several sets of connectors together on various AEGs, some upgraded, some not. Some using 11.1v Li-Po batteries, and some using 9.6v NiMH AEG batteries. Stupid. It really doesn't take much heat to do it either. They just suck. So they can get stuck together, which is lame if you're using a NiMH battery and need to disconnect the battery after use in order to recharge it. Not so much of a problem for Li-Po's because they use that second set of wires to charge, but still. What if it was your only battery and you wanted to use it with another gun? You really should have at least one backup battery, but I realize that everybody has their own budget limits and there is just so much Airsoft stuff out there that rocks face that one must allocate one's limited funds wisely in order to maximize one's "Win." My 9th grade honors English teacher would shart herself if she read this blog, but I'm pretty sure her genealogy report would show that she was a quasi-direct descendant of Satan, if you went back far enough. So I couldn't care less what she thinks.


Anyway, I really don't feel like wasting all of your precious COD4 time ranting about Tamiyas when I could be raving about Deans connectors and allowing you to feast your eyes on a sub-par soldering job that I did on my beautiful VFC HK416 CQB in an effort to swap out the worthless stock Tamiya connectors with some legitimately tight Deans connectors. You know me. I like photos. I'm very visual. So you KNOW what's coming next... 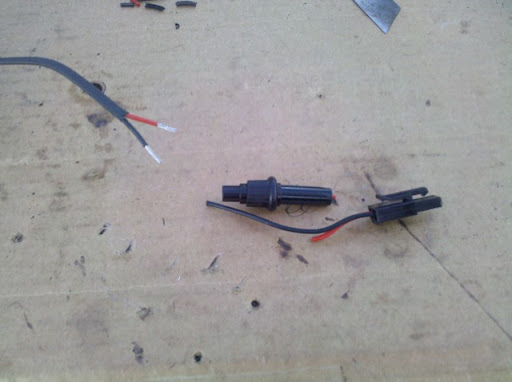 So I got a bit of a head start here before I managed to remember that I'm supposed to be documenting my progress to share with all of you three readers here on the blog.

Therefore, to the left, you see that I've severed the worthless Tamiya connector from the HK416's wiring, as well as the stupid fuse casing thing.  The fuse is lame.  I'm no electrician, but like the French, the fuse is not to be trusted.

I've also stripped the insulation off the tips of the wire to prepare them for soldering to the Deans connectors.  The details of what happened next will go with me to the grave.  All you need to know is that in the struggle for dominance between the myself and the process of soldering a #*$*&%@ deans connector to the VFC 416, I eventually established myself as the alpha male and the deans connector admitted defeat. 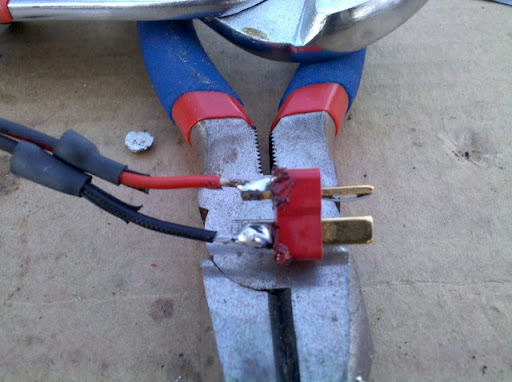 I think you can pretty much deduce what went down from the aftermath photo to the right.

And for the record, the answer is unequivocally "NO," I did NOT preshrink those stupid shrink-wrap tubes like an idiot, prior to slipping them over the soldered connection.  It took so much time and so many attempts to make the solder stick that the wires got super hot when I wasn't paying attention to them (like an idiot) and shrunk the tubes, rendering one of them useless.  I was able to salvage one of them and make use of it.  I used black electrical tape to wrap the other connection. 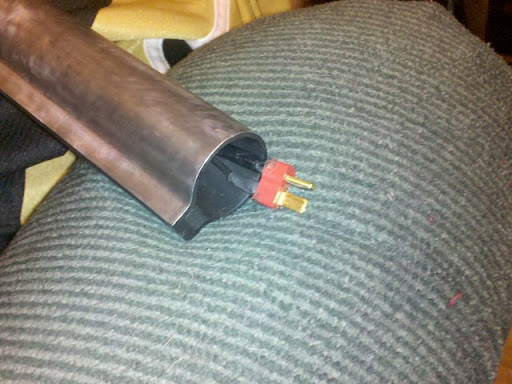 I did some clean up work in an attempt to make its presentation somewhat acceptable and achieved satisfactory results.

Here you can see the connector protruding from the end of the HK416's buffer tube.  Obviously, I have removed the stock for viewing purposes. 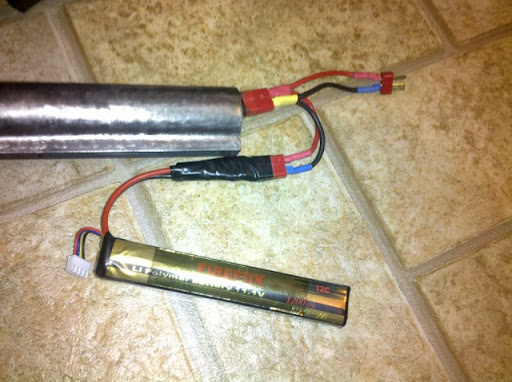 Next, what I've done is attached a female to 2 male Y-connector so that I can run two stick batteries in parallel with each other, thereby doubling my trigger time.  This essentially circumvents the issue of having to deal with the small battery space in most AR-style AEGs like the VFC HK416. 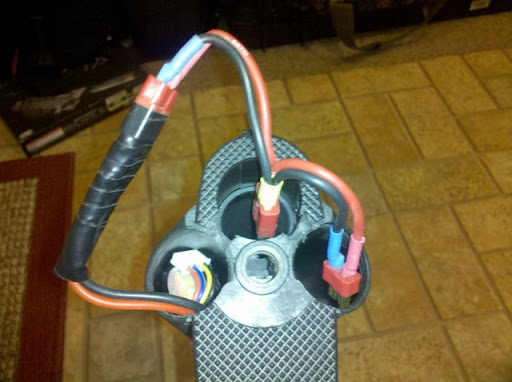 To the right, you can can get an idea of how the whole setup comes together.  If you couldn't tell on your own, you're looking at the back of the HK416's stock, with the back plate removed to show the buffer tube at top center as well as each of the stock's battery space tubes.  The wiring from the gearbox is coming out through the buffer tube as you saw above, and then the batteries sit inside each tube with their respective wires sticking out the back as well, in order to connect to the HK416's wiring.  I only had one of my stick batteries handy at the time that I took these pics, so just imagine the second one being in the shot and sitting nice and pretty, inside the stock's battery tube on the right side. 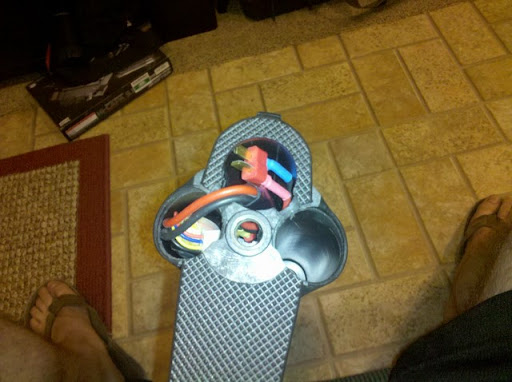 Here, you can see that I've taken the liberty of tucking the wires inside the buffer tube to allow me to snap the butt plate onto the back of the stock.  It's hard to see in this shot, but there are channels on the stock to allow the wire to pass through from the battery tubes into the buffer tube with the butt plate securely snapped in place.  I did Dremel these channels out a bit to make life a little easier for myself, but it wasn't entirely necessary, albeit entirely convenient once completed. 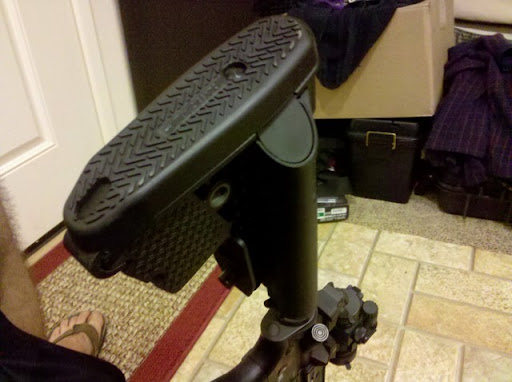 
That's all for today.  Long and overly-wordy story short, follow my advice and put Deans on all your AEGs, especially the high-quality ones like VFC's HK416 CQB.

I've got chrono results for you (post internal tuning), as well as a fashion show featuring the VFC HK416 CQB.   After that, we'll be moving on to even greener pastures.  I will do my very best to make sure those pastures don't suck for you.  I love you.