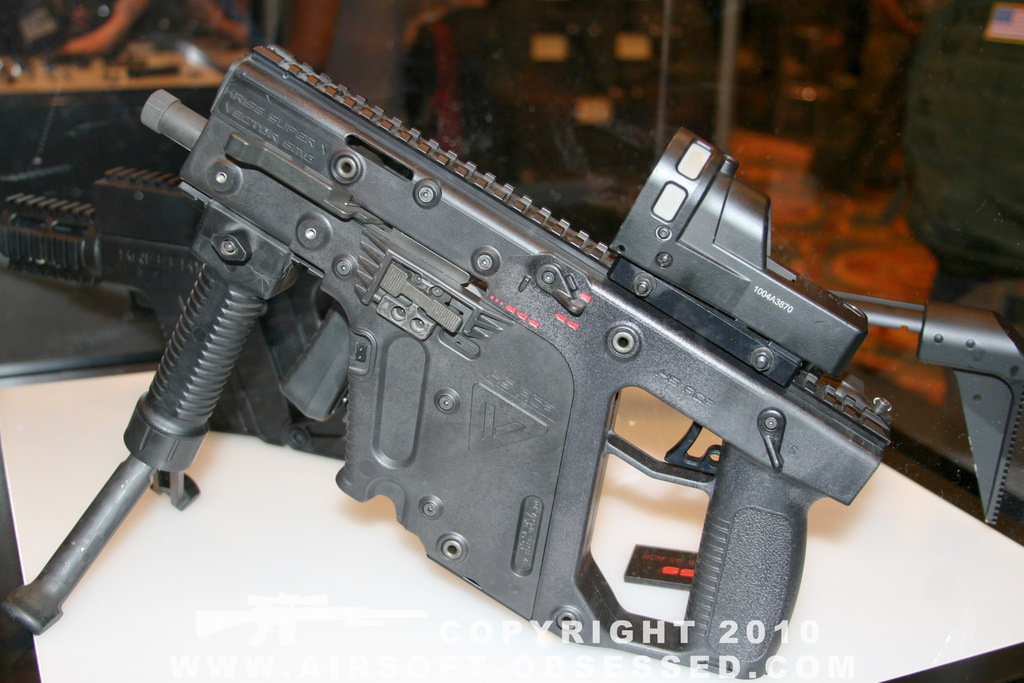 It would appear that Allen "Allizard" Lau & KWA USA just couldn't sit still recently and decided to pump out a phat load of sexy new Airsoft guns, which they debuted at this year's Shot Show (2011). Luckily, I had a chance to speak with not only Allen, but also Michael Hou, who were each very generous with their time in showing Todd & I what they've been doing to keep themselves occupied lately. I think we all know about the Airsoft version of the KRISS Vector SMG from KWA that the world has been talking about for awhile, which we'll get to, but there were some other items on the agenda that I don't think many folks were aware of. For example, how about their new line of AKs? Did you know them? I sure didn't. But let me tell you, when I walked into the booth and saw a wall of sexy AK variants with KWA trades on them, I said out loud, "Wow. There are some sexy AK variants with KWA trades on them!!!" Literally. Out loud.

So here's the scuttlebutt on the KWA AK74 Line-up:

Three Models, including two AEGs with KWA's new (and very patented) Kinetic Feedback System and one gas-operated full-stroke blow back system.  While I was rudely eavesdropping on Allen's conversation with Matt & Nic of Airsoft Pacific, he was explaining to them that he doesn't like to use the words "Blow Back" when referring to the Kinetic Feedback Systems in KWA's new AEGs.  I can't recall WHY he doesn't like to use that description, but he had a fairly valid point at the time, I do remember that much. How's that for my professional reporting?  Wow.  News media fail!  What can I say other than it was my first time?  (That's what she said). 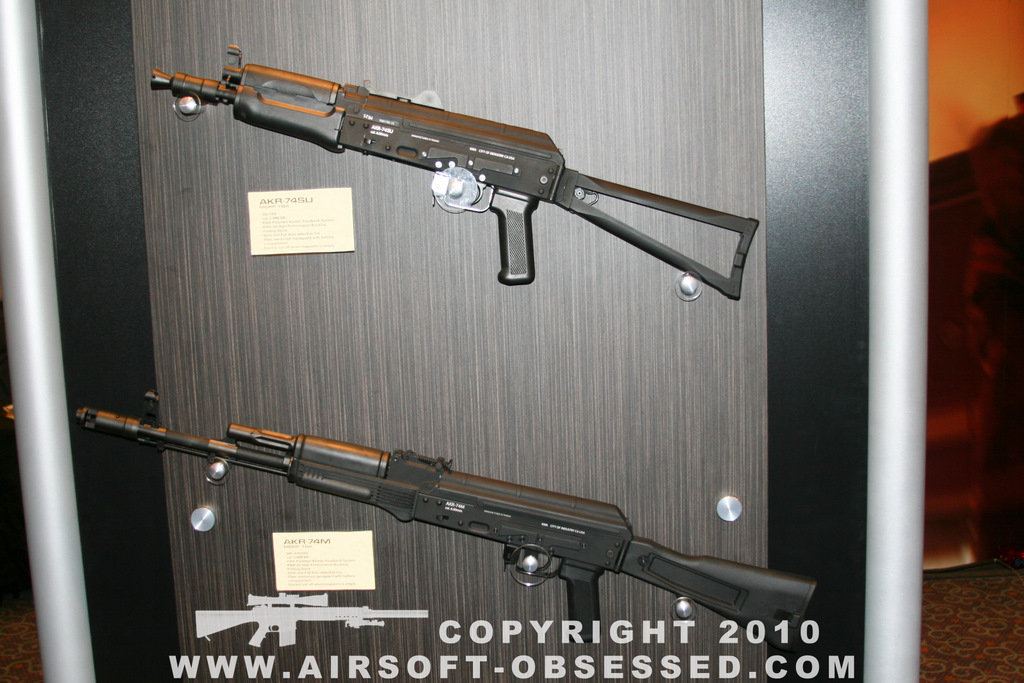 Here are the specs on the KWA AKR-74SU: 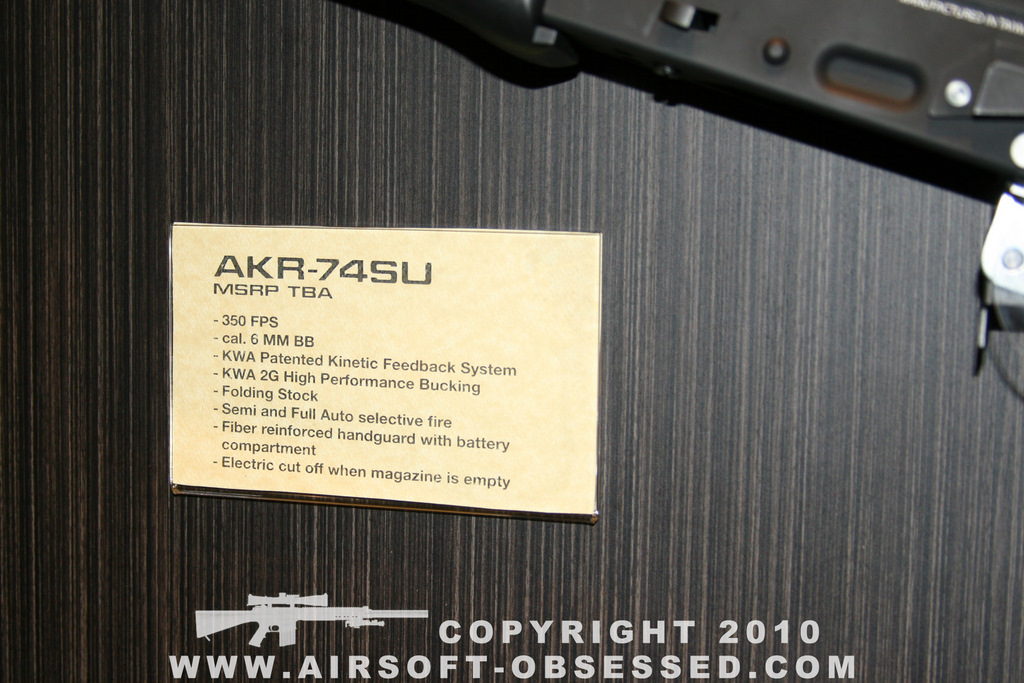 According to the display tags on the wall, the only difference in specs between the AKR-74SU and 74M AEGs is the FPS. The SU is slated for 350 FPS while the 74M is listed at around 400 FPS. All other items remain the same, other than, of course, their obvious aesthetics. Between it's short barrel and folding stock along with the safer, more CQB-friendly velocity, clearly, someone at KWA had "CQB" in mind when they designed the 74SU's specs.

The third option in KWA's new AK line is a gas-operated, full-stroke blow back system.  Here is the AKG-74M, which is basically the same external design as the AKR-74M AEG.  Internally, however, we've got a whole new sitch (situation). 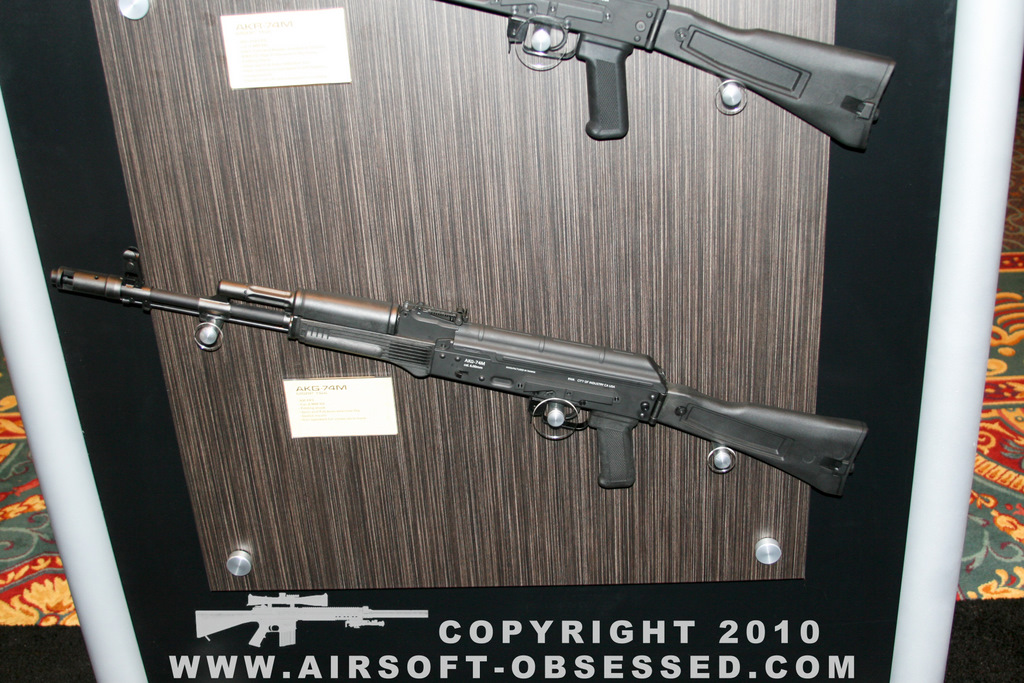 Here are the basic specs to the KWA AKG-74M: 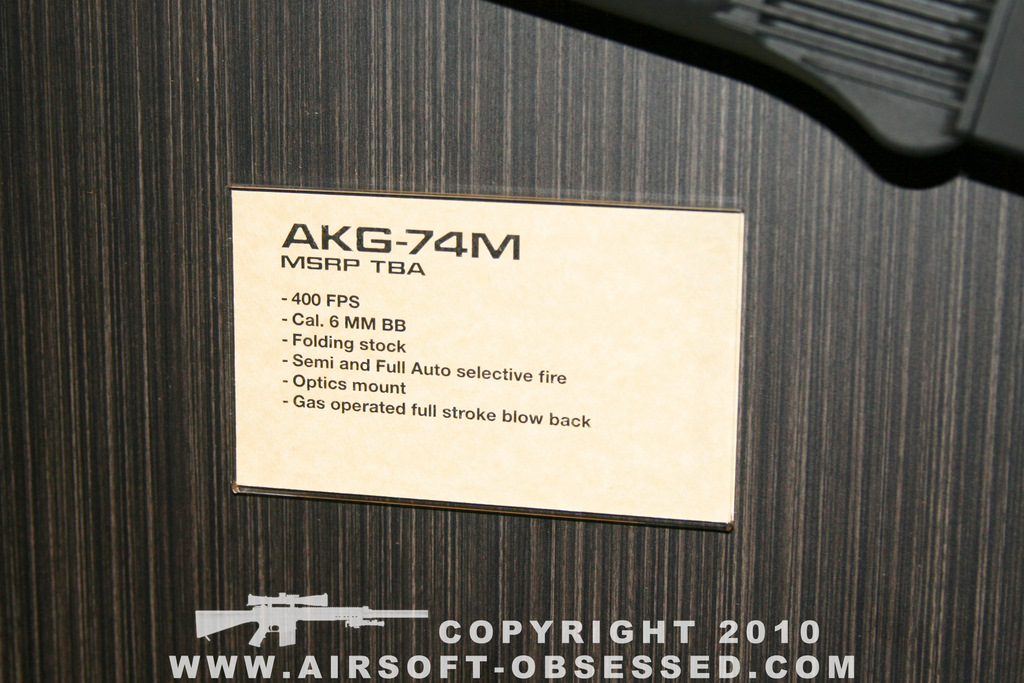 So that pretty much covers the new AK74 rifles from KWA. I don't remember when the release date of the AKs is scheduled for because not only did I forget to ask, but even if I did, I forgot to bring a pen and paper with me, or some other way of recording those kinds of crucial details that my readers might want to know. Good thing I have a day job. I kinda suck at this whole reporting-on-important-Airsoft-stuff gig. However, I will say this.

Keep checking in here on the Pyramyd Airsoft Blog and to Airsoft-Obsessed.com for more Shot Show 2011 coverage reports.