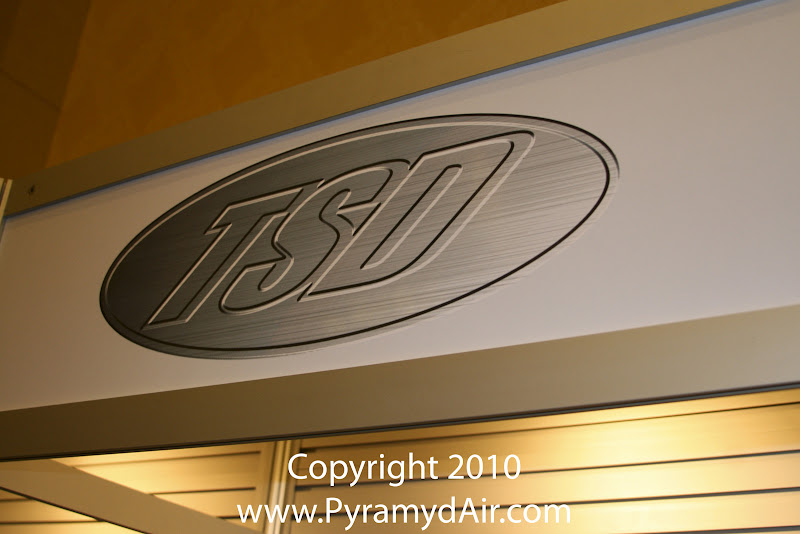 On my quest for Shot Show 2011 Greatness, I decided to stop by and say hello to my homies at the Team SD (TSD) Booth to see what their latest and greatest new products were. I saw some things I liked. I then snapped some pictures of those things. Subsequent to that, I have now posted them to the Pyramyd Airsoft Blog below for your viewing pleasure. I've created a sort of "mini image gallery" for each section that I've posted below. You're welcome, in advance.

New TSD/WE Airsoft Gas Blowback Pistols Gallery
The beauties below scream, "HOLD ME IN YOUR HAND AND PULL THE TRIGGER!!!" This probably shouldn't surprise you, but I get that a lot, actually.  This is what I call a "Wall of WE GBBPs." 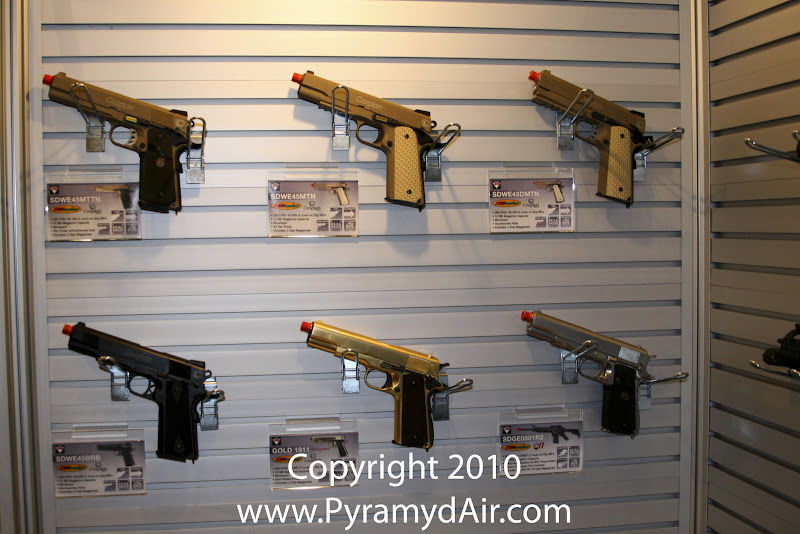 These WE Gas Blowback Pistols all feature the Caspian Trades on the slide, with the exception of the gilded 1911 you see there at bottom center.  I didn't notice that particular model was sans Trades until I was reviewing the photos afterwards, so I did not know to ask either Mike or Tommy, of Specialized Distribution, whether the final version (assuming that one wasn't) would come with the Caspian logo or not.  Did you notice the first letter of each of the words, "Specialized Distribution"?  If you guessed that Specialized Distribution might be the "SD" in "TSD" then you, my anonymous Airsoft friend, are fantastically correct.  Tiny factoid for you there.  Consider it my way of giving back to the community.

Speaking of "Walls of WE," how about some love for the M9 Beretta-Style Fans, eh?  Sorry, I spent so much time with a bunch of Canadians (which I will explain a bit more about at a later time), that I'm still trying to rid myself of their influence.  My sentences are slowly but surely ending less and less with the word, "eh," but it is an uphill battle.  One that I have to take one day at a time.  Anywho, WE M9s.  Who wants 'em!? 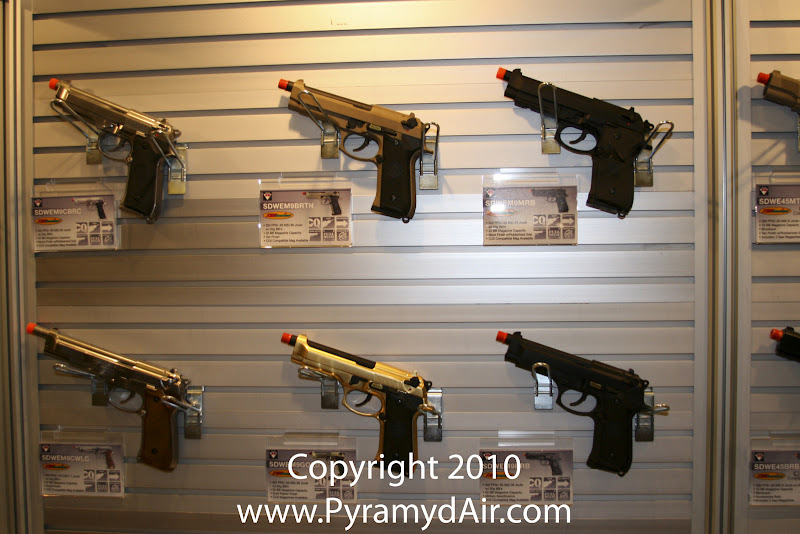 I know I wouldn't mind a few of those Italian birds below in my "flock" of weapons.  Man.  Despite the lame-factor there, you have to admit that was some what clever of me to come up with.  Just sayin'.
I know it's a bit "Goldmember" of me, but I just dig the gilded look, whether it be an TSD/WE M9 GBB... 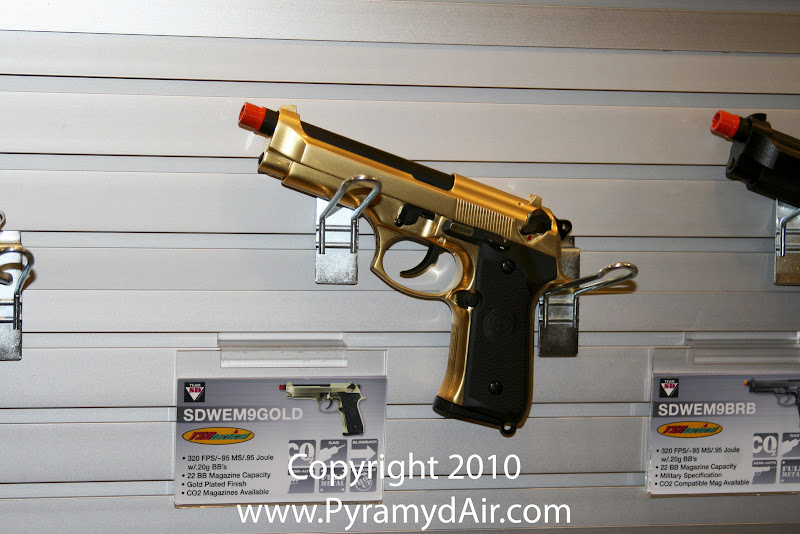 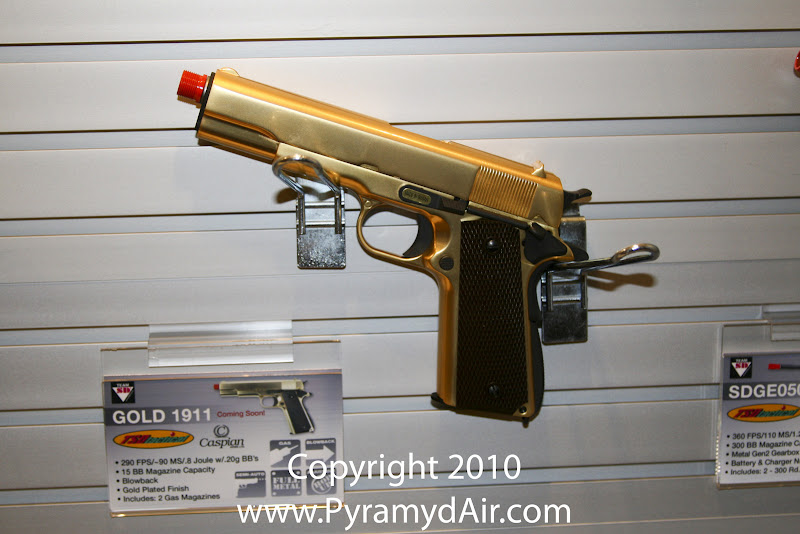 I LOVE GOOOOOOOOOLLLLLLDDD!!! But maybe the gold is too much for you to handle. Maybe it's just not your style. Well then, how about a Silver-plated WE 1911 MEU GBB pistol for your collection? 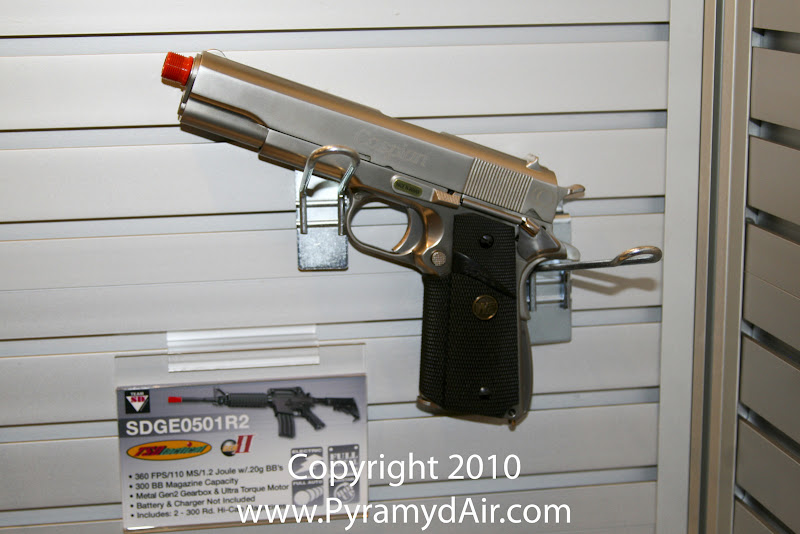 The temptation to over-use the already-over-used words "bling bling" is almost too overpowering to resist. Even in describing my attempt to fight the urge, I ended up having to say those two stupid words. Dangit! I really do enjoy that chromo'd out gat with the MEU-style grips. That's tactical hot, right there.

Airsoft AEGs & EBBRs
Nothing TOO exciting for me, personally, in the AEG section, but I have rather particular tastes, so I thought I'd throw these next few photos up for anyone out there that might find them interesting. My father has tried telling me for years, "It's not always about you, Tom!" So I suppose I'll honor that highly unpleasant idealology now. (Baby steps, people. Baby steps) 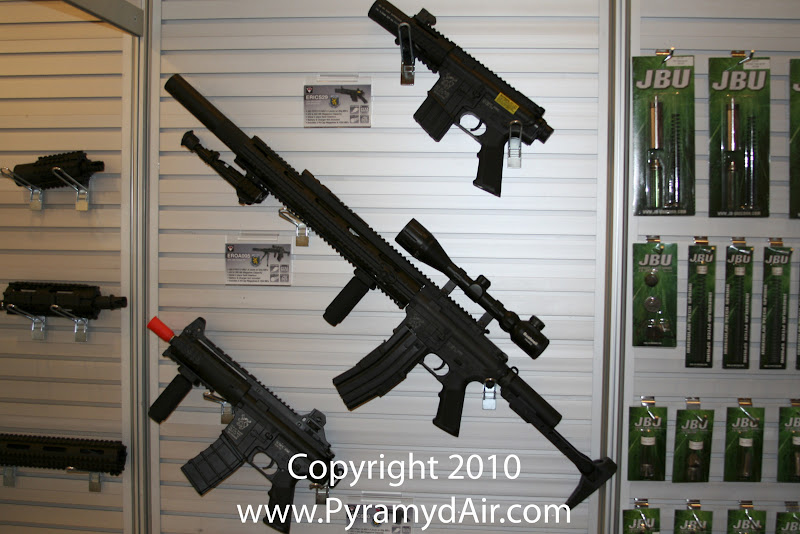 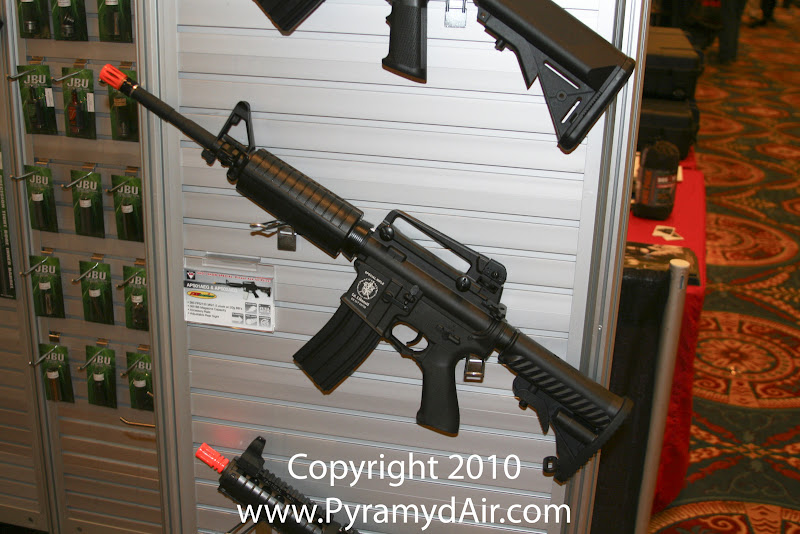 This next AEG caught my attention a bit when the fellas at the TSD booth advised me to pick it up off the wall. It's the Accuracy Pneumatics Shooting (APS) Electric Blowback Rifle. Rated to shoot 380 FPS w/a .20g out of the box, it's got a bit more weight to it than the average AEG, but nothing too bad where I would be disenchanted with its overall appeal. Reason being: extremely nice balance. I'm not sure how else to describe it, but some guns feel like there's too much "junk in the trunk", while others have too much weight in the front. The APS EBBR is right there in the middle where you'd want your gun to be. I didn't get the pricing from them on this one for whatever reason, I don't recall, but I would imagine they're going to keep it in a very affordable neighborhood, like they've been able to do with basically all the rest of their catalogue. The main question, as with all the new guns at Shot Show, is "how does it shoot?" But until they're released on the market, we won't know. So for now, rather than worry about something we just have absolutely no control over, let's hope for the best. Because if you don't have hope, what do you have left?

Funny story about that last line there: I actually got into a conversation with a pretty cool cab driver while there in Vegas. He was transporting my brother, The Toddman, and I over to the Irish Pub inside the New York New York Hotel & Casino at around 1:00 am in the morning (we were just getting our night started, cuz that's how we roll), which led to some incredible stories as well. It was this cab ride wherein he offered us the opportunity of patronizing one of the local Asian "massage parlors" there in town that was likely to have been paying him a commission for any of his cabbie customers that he could bring in to them. We politely refused, of course, and during the course of that refusal, we somehow got into the discussion of "hope" and how we, mainly my brother since I'm married and, for some reason, foolishly like it that way, weren't ready to give up on it (hope) so easily. At one point in the conversation, I asked him that same question I posed above, "If you haven't got hope, what have you got left?" His answer, without blinking an eye,


"Asian girls."
True story. However, it was one WITHOUT a "happy ending."

Boy, if I'm not a clever bloke, then Airsoft doesn't make the world go round. I'll tell you that much.

As you can see JBUnicorn has a number of upgrade and replacement parts plus accessories like the all-important battery pack and from what I've had experience with thus far, they put out a pretty good product at a reasonable price. I've used their tightbore inner barrels, cylinder kits and a few other items I don't remember off the top of my head and have yet to encounter any problems with them. Just like almost everything else in the Airsoft world, YMMV (your mileage may vary).

Yes, I realize this post got WAAAYY out of control and even involved an off-color story involving a Vegas Cabbie, an Irish Pub and an Asian Massage Parlor, but it is what it is, my toy-gun-loving friends.