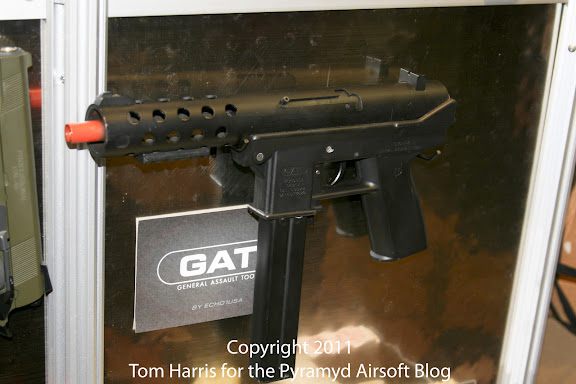 Introducing (Sort of) a new Airsoft submachine gun, the new Echo1 GAT (General Assault Tool) in an "auto-electric" platform (it's an AEG, Snickle-Boop). 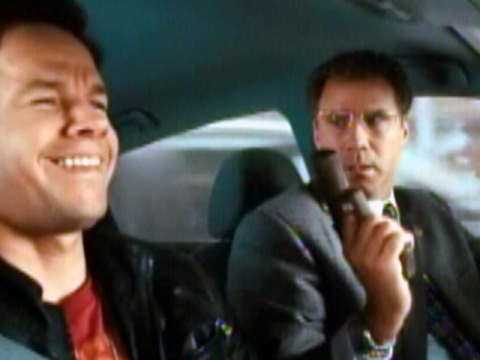 Image Copyright: Columbia PicturesIf you haven't yet seen the movie, "The Other Guys," starring Will Ferrell & Mark Wahlberg, I suggest you do so quicker than you can say, "DESK POP!!!"

It's a phenomenal film wherein Will Ferrell plays a former college pimp (pimp name=Gator) who now works as an accountant (*deep Ice Cube rapper voice* Yay Yaya!) for the NYPD.  It's got a whole slough of other entertaining characters you'd recognize.

The title of today's blog entry is not just hilarious and inappropriate, but it happens to be a somewhat modified quote from, "The Other Guys" that I've managed to connect to Echo1 USA's new triple acronym Airsoft gun: the GAT SMG AEG seen above.

After you check out this next bit of somewhat-old news and then take into consideration the other guns I've already discussed here on the Pyramyd Airsoft Blog that were on display at the JAG Precision/Echo1/MadBull/SOCOM Gear Shot Show 2011 booth, it's reasonable to understand why they are definitely in the running for the best Airsoft Shot Show booth this year.  When I say, "best," I'm speaking in terms of not only the NUMBER of new guns to be released in the short-term** future, but also the impressive variety of new models they'll be producing.  Some of these models were previously not in existence on the Airsoft market.

**Short-term in the tax & accounting world generally refers to a period of time less than one year, and that is what I "mean it to mean" (yes, I just said that) in this context as well.

Check this shazzle bedazzle out: 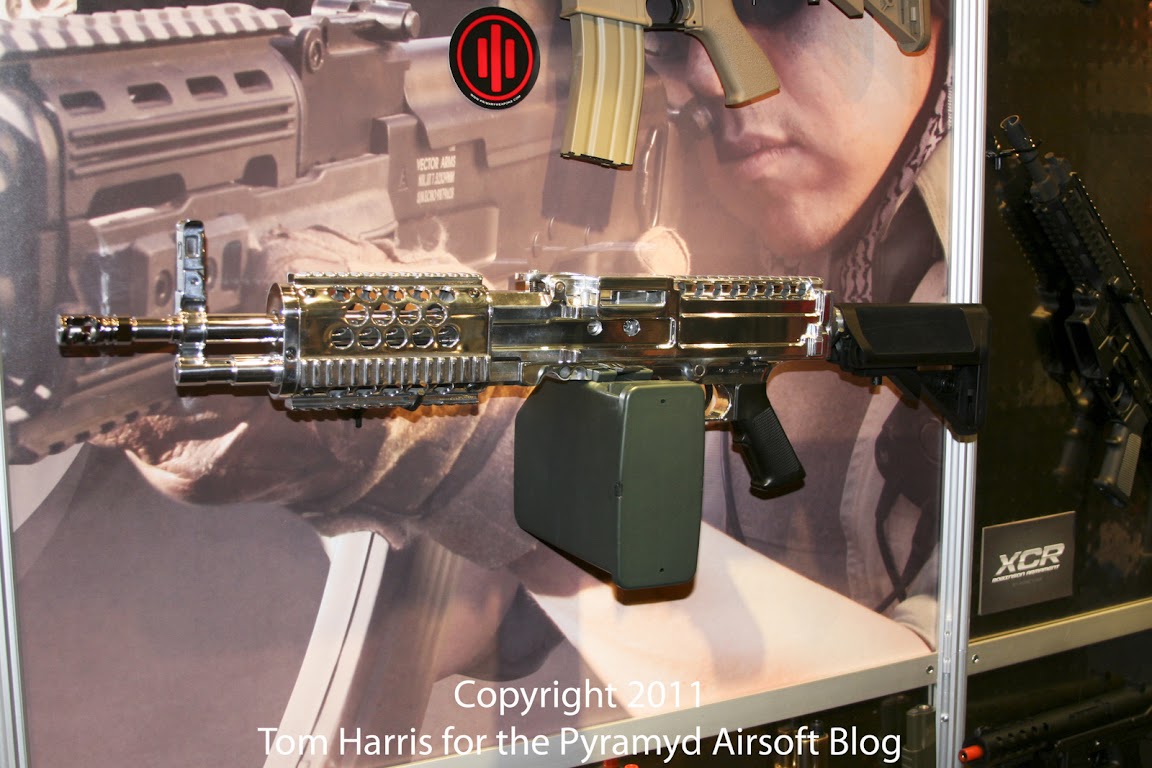 That's a chrome'd-out Echo1 prototype (final version will likely be black, not chromo) of a new Airsoft support weapon that they've yet to assign a model name. Now, just between you and me (and the world), that looks an awful lot like an Airsoft replica of the Knights Armament Co. (KAC) LMG (which, for all my noobz out there, stands for "light machine gun"). Aside from KAC being perhaps one of my favorite manufacturers of real guns, I'm seeing some things in this picture that I like. Number one: it's going to be well-made, inside and out, no doubt and, therefore, makes me want to shout.  Secondly, that pistol grip looks super similar to the standard M4 grip that we all know and love. Also, that stock looks like it slides over a buffer tube. Both of these things tell me that there are some customizable grip and stock options for this gun to suit your ergonomical needs or vanity preferences. I'm pretty particular about the grips I use on my guns because of the shear size of my hulking gorilla hands.  I rarely leave the original grip on my guns, assuming the original grip is replaceable.

Next up is the Kel-Tec & Lonewolf prototypes. 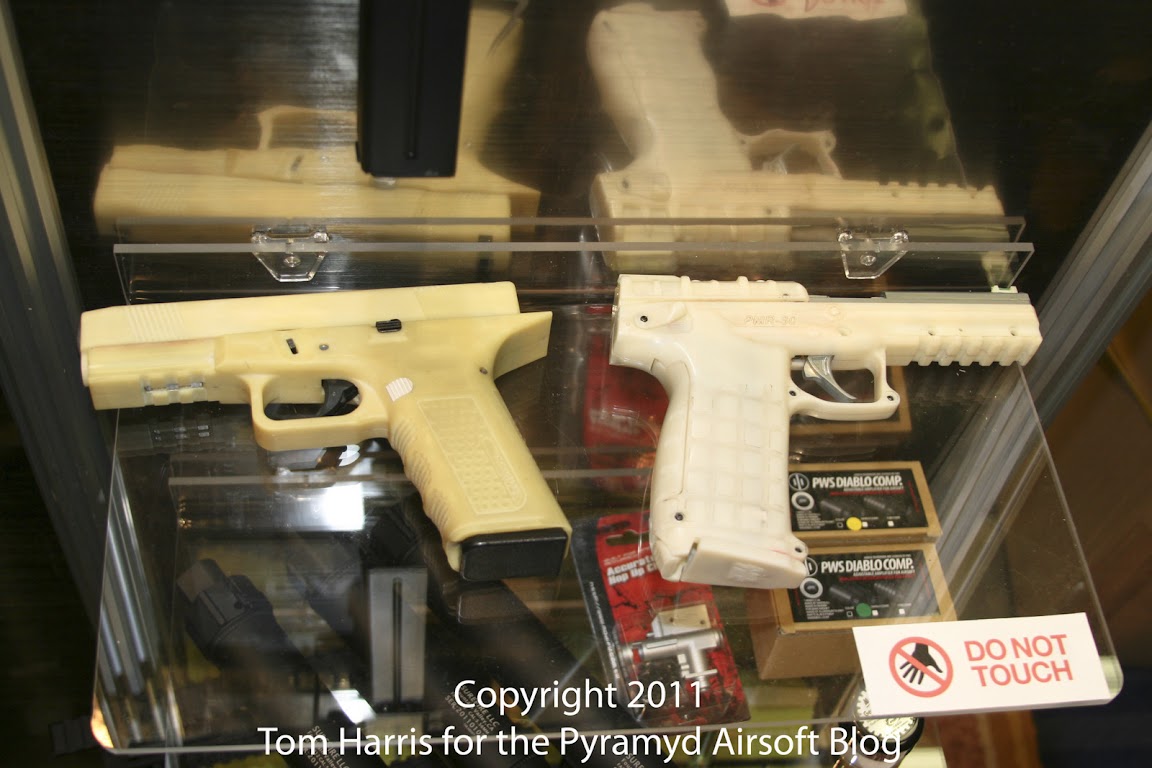 These will be licensed gas blowback pistols and the Kel-Tec will be produced by SOCOM Gear. While nobody specified who the manufacturer will be for the Lonewolf model, I'll give you two guesses as to who it will likely be.  You might notice that the Lonewolf model looks awfully similar to a Glock (slide, finger molds on the grip, plus the gas magazine), and has hints of a 1911 (note the dovetail grip).  Well, that's cuz it's a sort of hybrid between the two, designed to bring the best of both worlds into one complete and awesome gun.  These items are still in the early phases of development, so don't expect them out in March or anything.  I would think maybe an end-of-2011 release date might be more realistic.  I tried confirming all this last night with Brian (aka Rick) Holt at Echo1 via text messages, but he didn't respond even though it was only one o'clock in the morning!!! What a bum (Brian, I'm kidding. Sorry for texting you at such a preposterous hour).

Normally I save the best for last, but I love so much of what the JAG booth had on display, that it's kind of ALL the best.

How about the
Officially Licensed Surefire Suppressors by MadBull!?!? 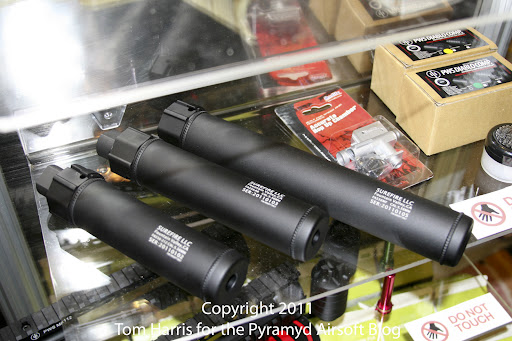 While they only had three on display, MadBull will actually have the five (5) options available, varying by length, as pictured below.

Just saying the phrase, "I REALLLY want one of each of these new MadBull suppressors!!!" is such an understatement that I'm not going to bother even saying it.  Just assume that they're all I can think about night or day, and that I'm starting to lose my appetite over the thought of living without them in my life. 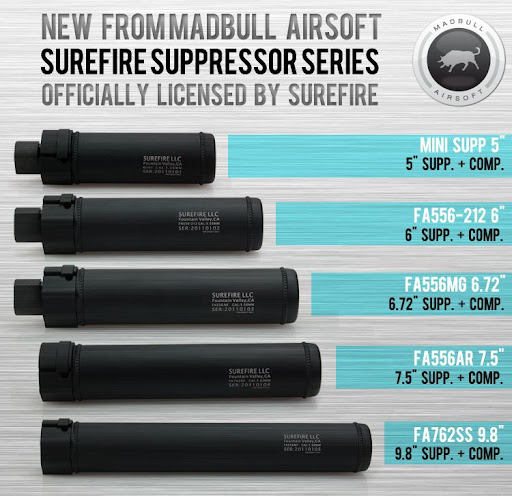 If you're wondering what the "+ COMP" part of the descriptions to the right refers to, I'll tell you: Each suppressor comes with a special CNC'd aluminum flash hider required to attach these sexy cans to your favorite AEG.  OR, if you have an UGLY and/or not-so-favorite AEG, these MadBull Surefire Suppressors may be an even better suited for that, as they will allow you to enhance your ugly AEG's appearance.


The process of using the MadBull Surefire Suppressors to make your unattractive Airsoft Gun look more appealing is essentially what's referred to as "dressing up or polishing a turd."  Either or.  FYI.

Maybe you don't want a "turd" for an AEG.  Maybe you want one that looks good AND is also built for winners. 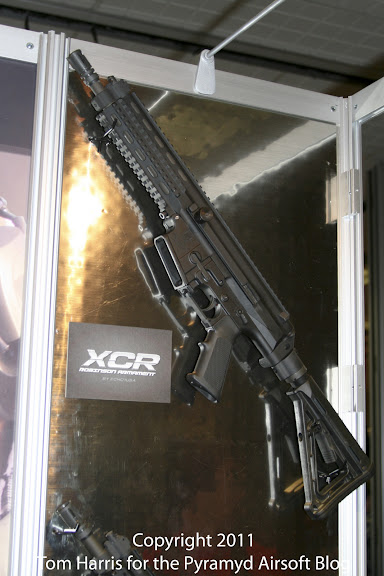 By now, I'll admit, you're probably already at least somewhat aware that Echo1 is producing this gun, but I don't care.  I am going to talk about it anyway.

There are a couple new features to this gun that set it apart from the typical AEG.

Number one: it's officially licensed and, therefore, a legal copy.

Echo1 likes to play by the rules.  You should too and call your hits.

Number two: the XCR uses a new split gearbox design, similar in concept to the ICS gearboxes you might be familiar with, allowing all you Airsoft techs and tinkerers out there more flexibility when you're upgrading or tuning this gun to your heart's content.  Brian demonstrated just how easy it is to access the gearbox and separate the two pieces while we were taking a break from busting tangos two weekends ago at one of our local fields.  I was definitely impressed by the design and how easy it was to get access not only to the gearbox, but inside it as well (which reminds me of my first time).

Not pictured, but included is a PEQ box of some sort to allow one to connect the ever-important AEG battery pack so that you can actually shoot and play with your gun, rather than just stare at in your parent's basement whilst you start flame wars on your favorite Airsoft forums via the interwebz.

Echo1 will also offer a folding stock version with a little bit shorter front end to it. I was able to snap a few shots of Brian eliminating some OPFOR at last week's Desert Fox MOUT game with his ultra sleek prototype combo: the Robinson Arms XCR AEG prototype by Echo1 with the Surefire Suppressor prototype by MadBull attached. 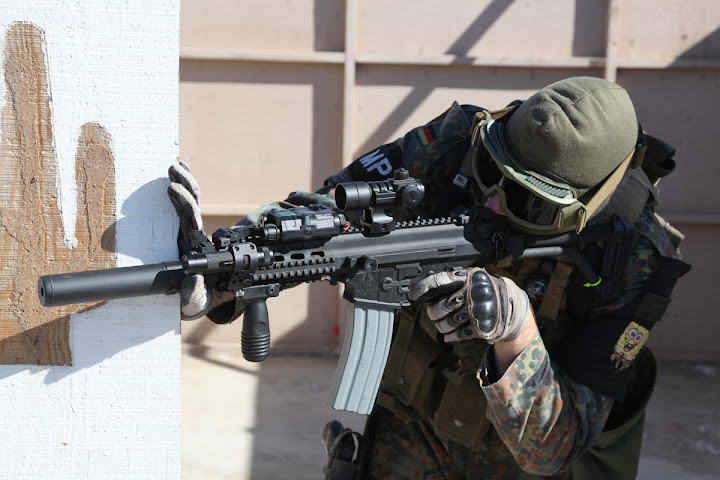 I believe the MadBull suppressors are either now available for sale or will be soon.

Below is a gallery of my remaining shots from the EPIC JAG Precision booth at Shot Show 2011, including a few shots of the Robinson Arms XCR AEG by Echo1 that I took at the Desert Fox game just for good measure. Click on any thumbnail for a larger view in a new browser tab or window. Due to atrocious indoor lighting conditions and my lack of ability to compensate for that on a $2000 camera/lens setup (all Canon, by the way.  FTW) led to some poor/FAIL shots at the JAG booth. It was also my first booth of the entire Shot Show, so I hadn't quite got into my groove yet either. Pathetic excuses aside, the photos do these guns absolutely no justice. You'll need to see them in person to be a believer like me. Try to enjoy them anyway though. There are children starving in third-world countries.