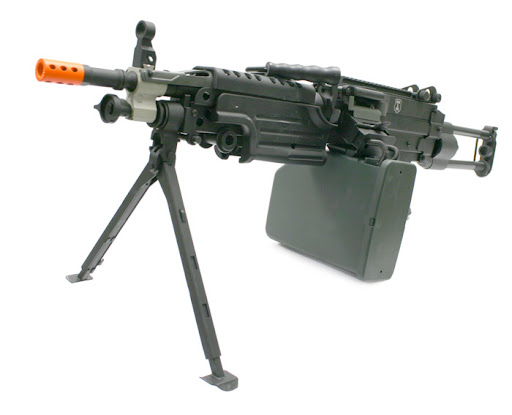 PolarStar Airsoft's mastermind, Ben Noji, apparently just can't sit still. As if the release of his new drop-in Fusion Engine for version two AEGs and complete PR-15 EPAR series HPA-powered rifles isn't enough, he's decided to add a slightly different version to the mix, catering to those of us who fancy the Squad Automatic Weapon (SAW), like the Echo1 M249 Para Airsoft SAW, for example. With a rates of fire exceeding 40 rounds per second, it would seem nothing short of obvious that the new PolarStar Fusion Engines should be paired up with an Airsoft gun that is designed to hose down the OPFOR with a shower of 6mm rain drops. Ben's latest video is actually just a stress test on the system. The video is in no means an indication that anyone, including PolarStar or myself, suggests playing in a game using such a high joule-rating.

Keep in mind, that was 700 fps with TSD .28g BBs. At the same amount of joules with a .20g BB, we're talking about a system that can withstand 828.3 feet per second at 28 rounds per second. When dealing with high pressure air, I do enjoy knowing that the system I'm using is more than capable at NOT exploding under the pressure I'm operating at.  Since playing velocities of around 400 fps require much less pressure, I can rest easily knowing my gun won't explode (call me irrational, but I'm scared of air.  So what!?!)  And having spoken with Ben earlier this evening, I can tell you that he built this gen1 system using some spare parts he had lying around. The fittings he was using weren't the right ones for this particular system, so they were causing a restriction on the air flow. Once he gets the proper parts put on the gen2, the rate of fire, which is already better than most airsmiths can achieve as it is, can be expected to increase.

Here's another video that has been up a for a little while now, showing what the version 2 fusion engine can do at field-safe velocities.

I can hear the nay-sayers already: "this system is unsafe because it allows users to run their Airsoft rifles at highly unsafe velocities with an outrageously monstrous rate of fire." Well maybe.


However, so is picking your nose while running with scissors on icy sidewalks.
What PolarStar has done, however, is to install a release valve in their Fusion Engines so that if the system were to exceed a certain PSI level, the release-valve is deployed and keeps the gun from firing over and above a specific energy level. It not only protects us from our inherently harmful tendencies as humans, but also helps to protect the solenoid inside the engine as well for longevity purposes. The bottom line is that these new systems, JUST LIKE EVERY OTHER AIRSOFT GUN ON THE MARKET, the PolarStar systems will need to be used with extreme caution and responsibility. Don't be the idiot who ruins it for all of us.

PolarStar has also released the long-awaited pricing info on their systems.

M249s are currently only available as﻿ a limited production custom order item.


I'd like to know how many of you out there are interested in this new system or the reasoning behind why you are NOT interested.  It's cool if you're not down with it. I respect your opinion.   I'm just curious to know if there are others that are as excited as I am about this system or if me and Ben Noji are the only ones who give a hoot.  Sound off in the comments section below!

Also, stay tuned this week for a very sexy update featuring me, an Echo1 M240 Bravo and a damn good time playing Airsoft! 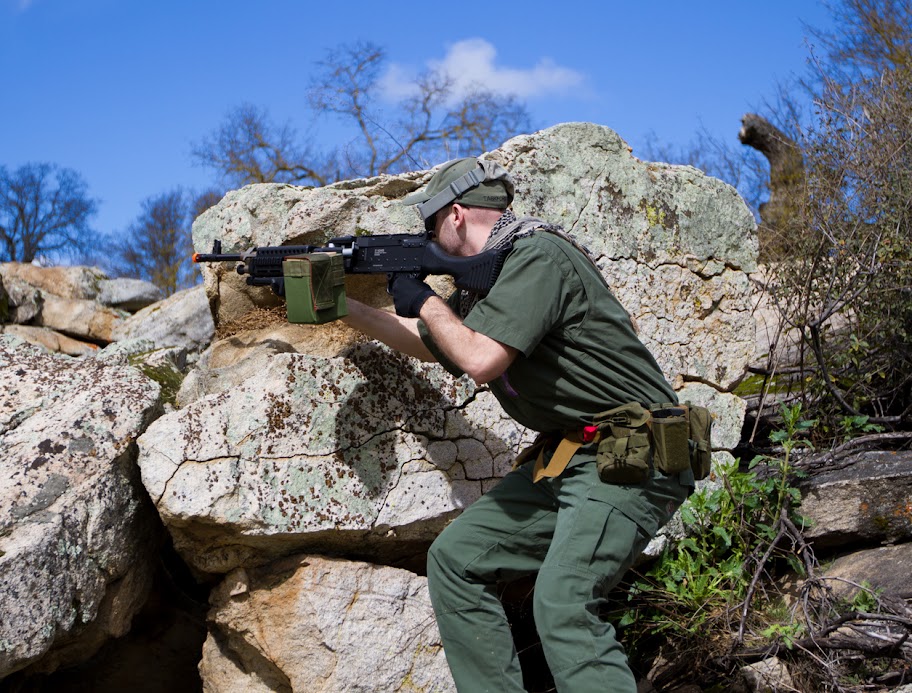 This photo was taken by sports photographer, Dave Bakholdin of Bakholdin Photography, who acted as my own personal, Russian** Airsoft Papparazzi for the day.  ONLY thanks to my comrade's superior action-shot skillz with his glorious Canon 7D and 70-200mm L Lens setup, was anyone able to capture the true essence of my utter domination of the OPFOR in my full-on 5.11 Tactical Series uniform & battle belt rig.  Oh yeah, then there's that Echo1 M240 Bravo that I'm mowing down the bad guys with.  That helped in the whole "looking good" thing too.


Stay tuned for the full AAR on the incredible game at Hill559 along with my first impressions of actually fielding a gun (WITHOUT A SLING, mind you) that weighs as much as a baby hippopotamus in the next 24 hours.
Man, I love this silly little game involving the use of toy guns like the 240 Bravo that look and shoot like a dream!

**In the coldest peak of the Central Valley's winter time, you won't find Dave throwing on an extra jacket to keep warm.  Nope.  He plays chess to raise his core body temp and fills his hydration bladder not with water, but Beluga Gold Line Vodka to fuel up his large Russian frame for a long day of playing and photographing Airsoft.