Shot Show 2011 Sabotage at the ICS Booth? You be the judge. 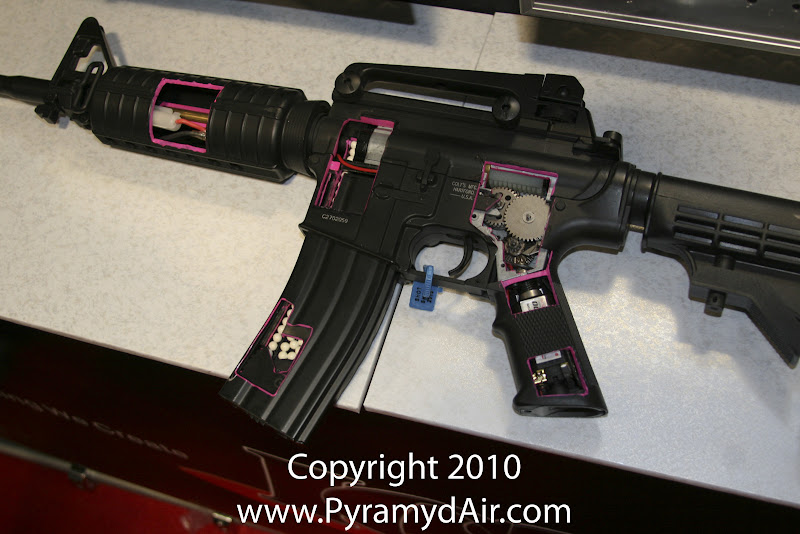 So we'll get to the possible sabotage story after I show you a few of the Airsoft AEGs on display at the Shot Show 2011 ICS Booth. Let's talk about the guns first. While I can't say that I was the biggest fan of ICS prior to visiting their booth, I will humbly admit that they seem to put out some good looking guns and their staff was very pleasant, despite the fact that they didn't even know they were talking to the 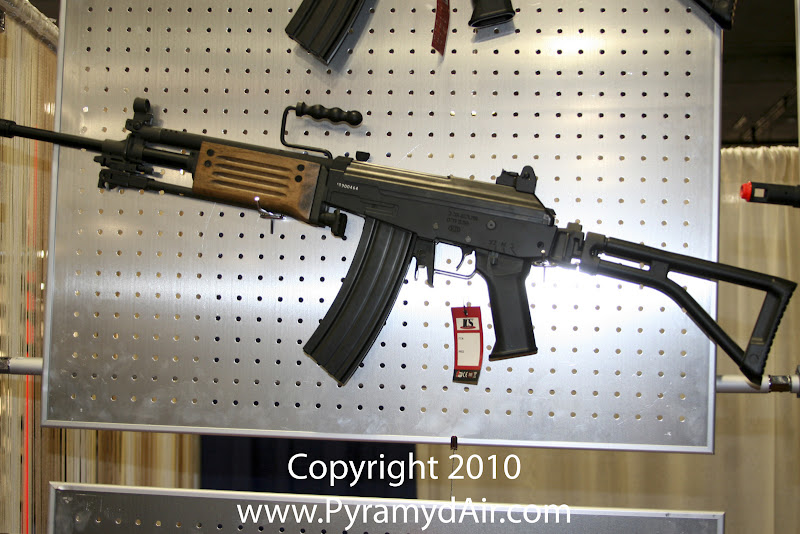 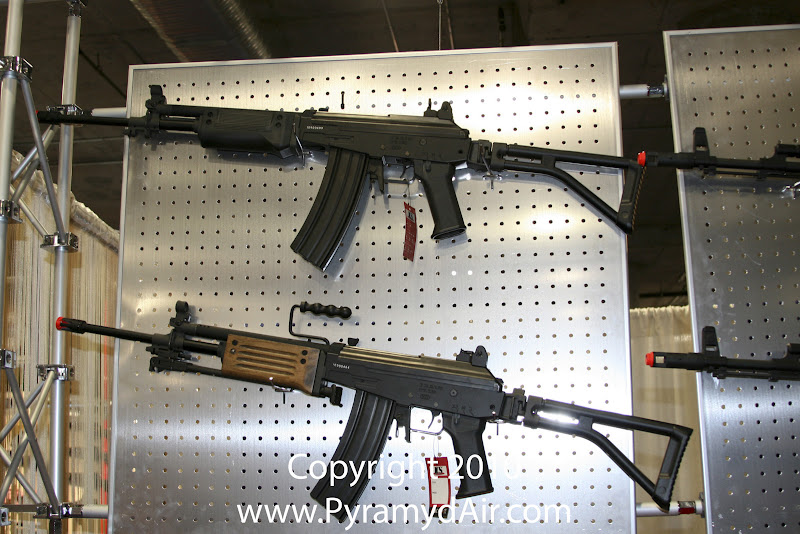 I was immediately drawn to the ICS Galil ARM (Automatic Rifle & Machine Gun). I dig it and have for quite some time. The real steel version was manufactured by Israeli Military Industries, makers of the infamous Desert Eagle .50AE, among several other notable firearms that I find attractive and impractical. Featured on the right, you've also got the Galil SAR looking mighty fine as well. I reviewed the licensed Cybergun Galil SAR earlier last year and was quite pleased with not only it's build quality but also it's performance. But I guess ICS probably doesn't want me talking about that during their time to shine. Good thing they're not in charge here then, huh? 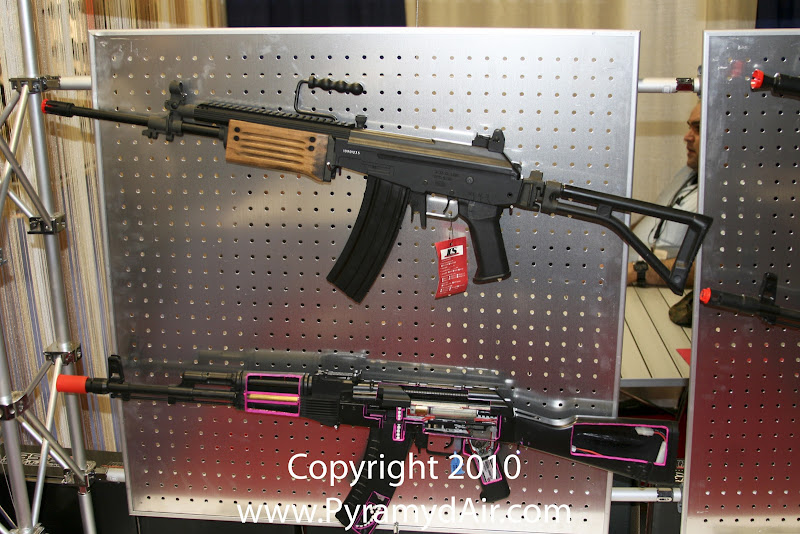 Anywho, here's a Galil ARM variant with an integrated rail system, perfect for mounting an optic or PEQ box. You may also notice an odd-looking ICS AK74 underneath their Galil. At a closer glance, you may be able to deduce that ICS has cut out pieces of the AEG's outer body, in order to show people like you and me what goes on inside their Airsoft guns. Almost like an AEG Cross-Section, if you will.


Speaking of a closer glance... 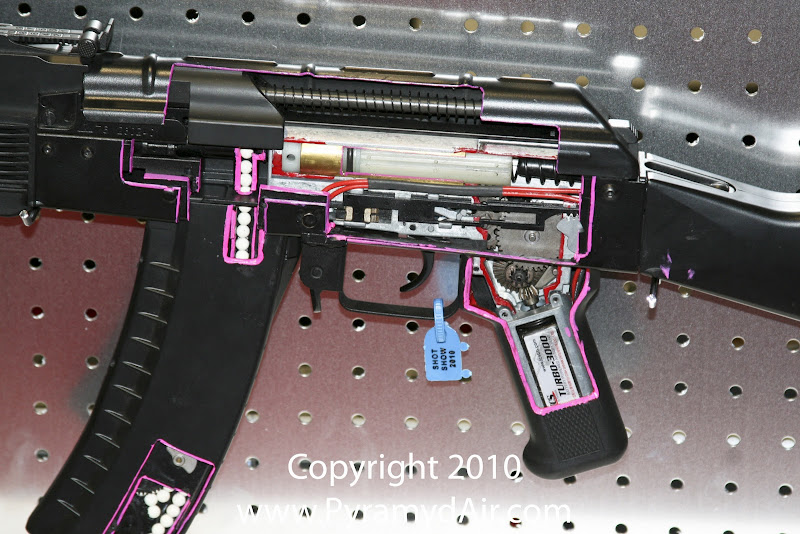 Here's a cross-section of an Airsoft AEG up close and personal. 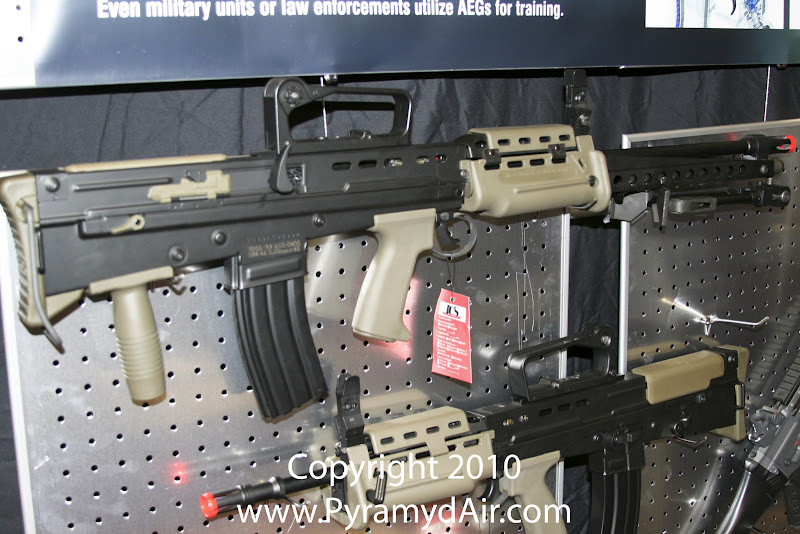 Several unlikely candidates to catch my attention were the ICS L86 A2 Airsoft Support Weapon and his two little homies, the L85 A2 rifle and the L85 A2 Carbine, all Airsoft AEGs, of course. To the Left, you'll see the L86 in all its bullpup glory, waiting to go home with someone special (aren't we all). Just underneath that and barely in the shot, you can see the ICS L85 A2 Carbine, designed for close-range engagements in tight spaces. I love engaging tight spaces. 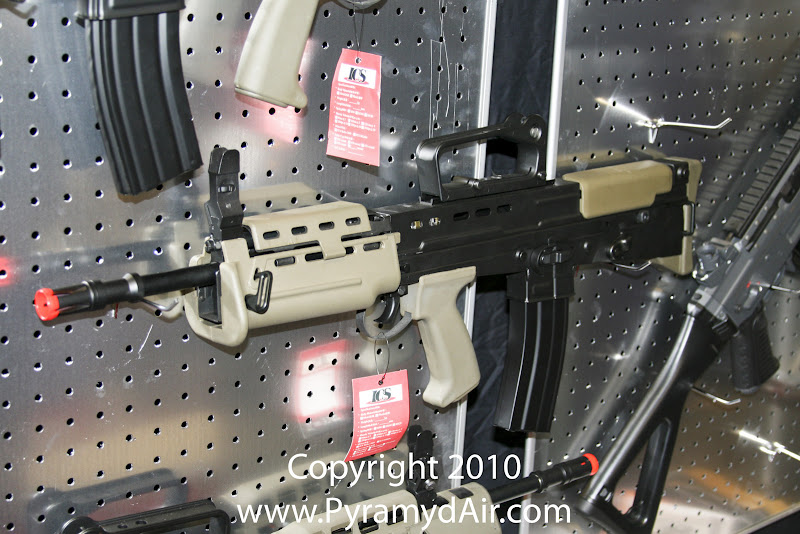 I bet the ICS L85 Carbine AEG does as well. 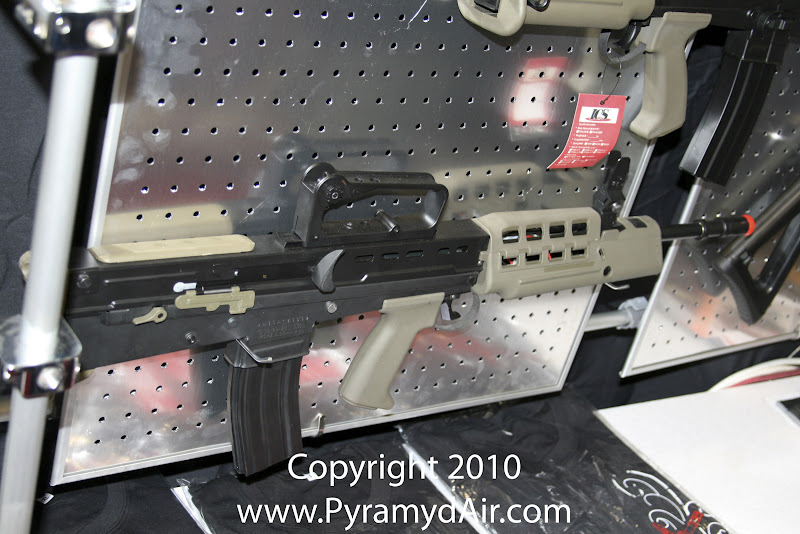 Here's the "regular" L85 A2 Airsoft AEG from ICS. It took me a minute or two, but I eventually noticed the hand guard was a smidge longer than the Carbine version. 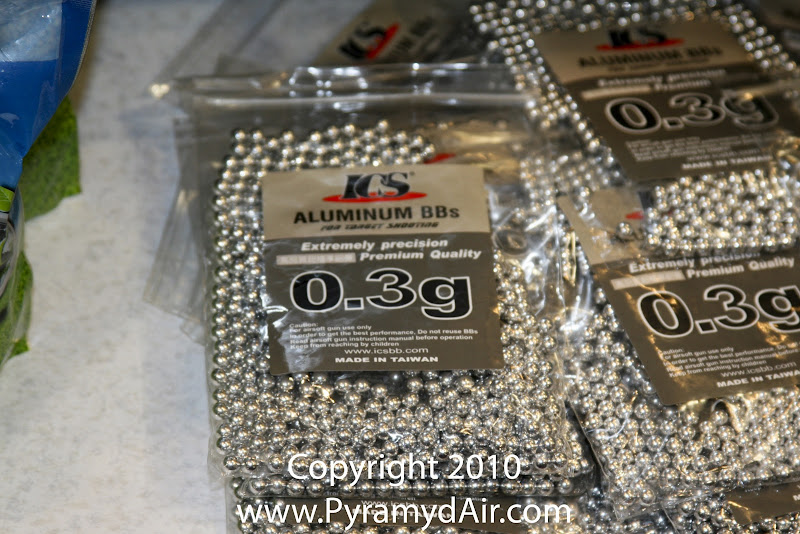 Here are the ICS Sig 551 SWAT & Sig 552 Commando Airsoft AEG Rifles, respectively...
The Sig 552 model has the front hand guard rail system, which I believe is a new feature, considering they don't have it listed on their website anywhere that I checked.

Not that it really needs much of an introduction, but I know there are some of you out there that have been looking forward to the ICS M3 Grease Gun coming out. Well, here's a visual treat for you... 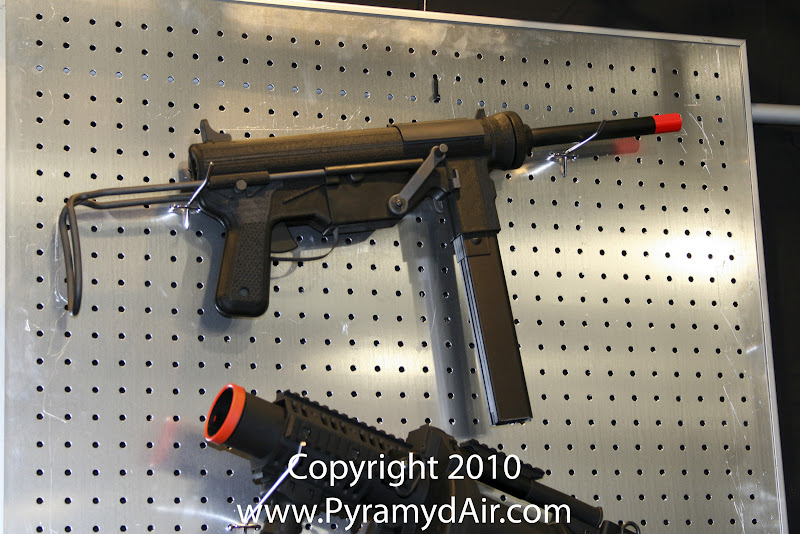 Takes Thompson mags and fits a small-type battery in that hot & greasy body.


Just underneath that is the new ICS GLM Grenade Launcher. 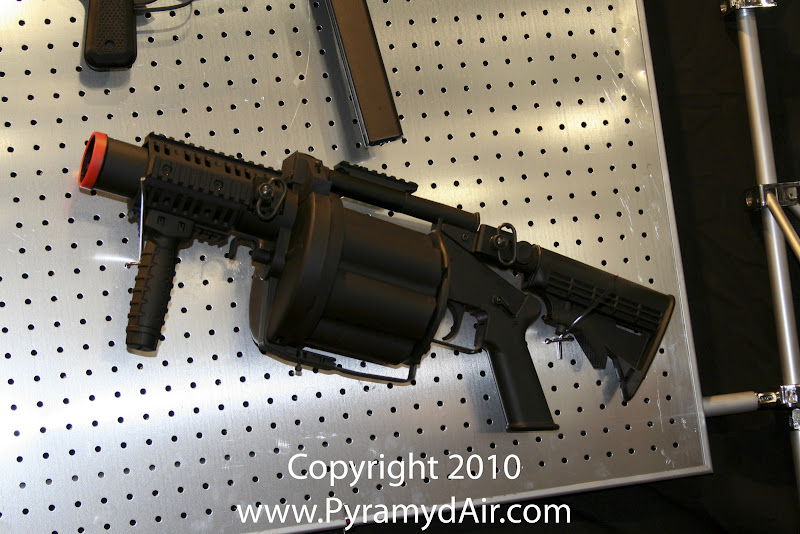 Alright, so the sabotage thing. I don't know if this guy was just horrendously oblivious to his surroundings or purposely trying to ruin as many of my photographs that he could while I was trying to document the wall of new stuff at the ICS Shot Show booth. Here, ICS Marketing Specialist, David Tsao, is showing me the ICS FN FNC AEG, then all of a sudden, Captain Oblivious, who was standing to my left, pulls his camera out of nowhere and sticks it in my shot while I'm clearly snapping photos of my own. 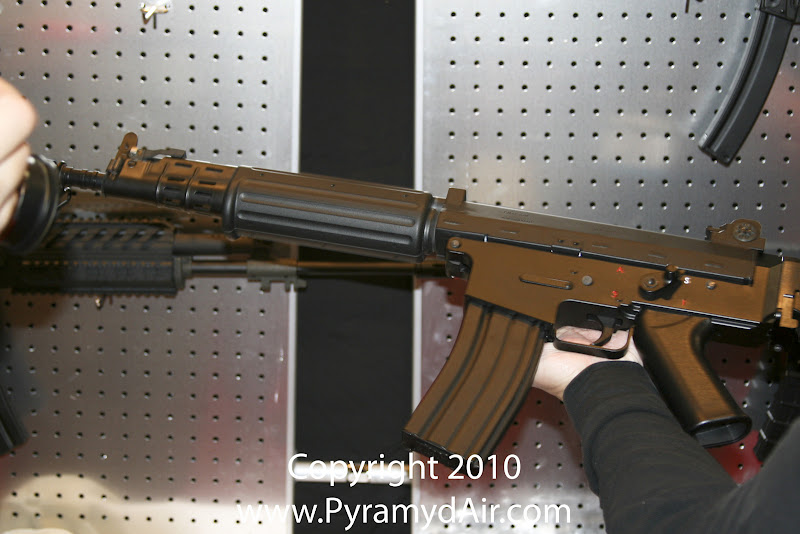 Shot Show Sabotage or Just Desperate for Attention?  Too close to call.  Let's look at some additional footage.

I didn't sweat it the first time cuz I'm cool like that, but then this... 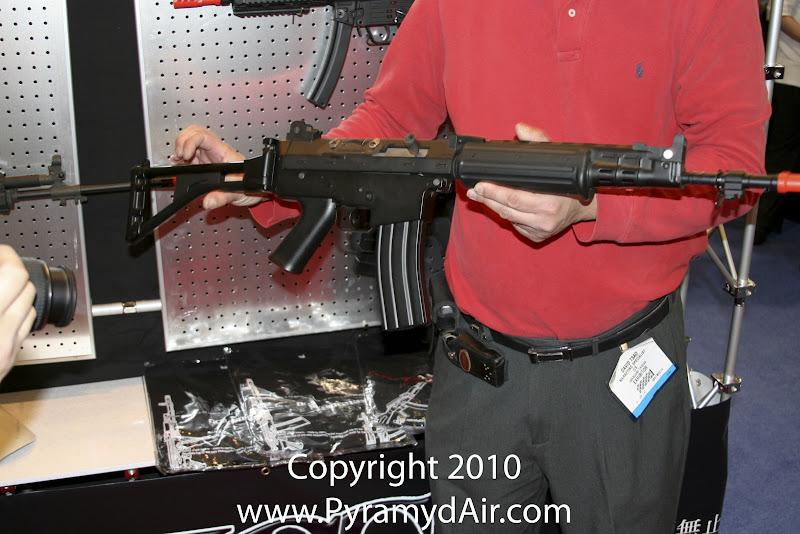 Whiskey Tango Foxtrot, homes? David and I were clearly having a convo and this brosef keeps interjecting with weird questions in an undeterminable (and thereby untrustable) foreign accent. David isn't sure how to respond and tries to answer the questions as best he can. I can barely understand this guy. All I know is that my camera lens is longer and wider than his, so I start to feel sorry for his inadequacies.

He keeps chatting David's poor ears off and I decide to try and snap a few more shots of other guns whilst I wait for this guy get distracted by a shiny object or something and leave. But he doesn't. And while he's chatting it up, he's constantly looking back at me with a questionable grin on his face.


The kind of grin that makes you wonder whether he's been eating poop lately.
I'm trying not to acknowledge him, and I think he detects this, at which point, right as I've found a good-looking Galil/AK style AEG to document, BOOM. 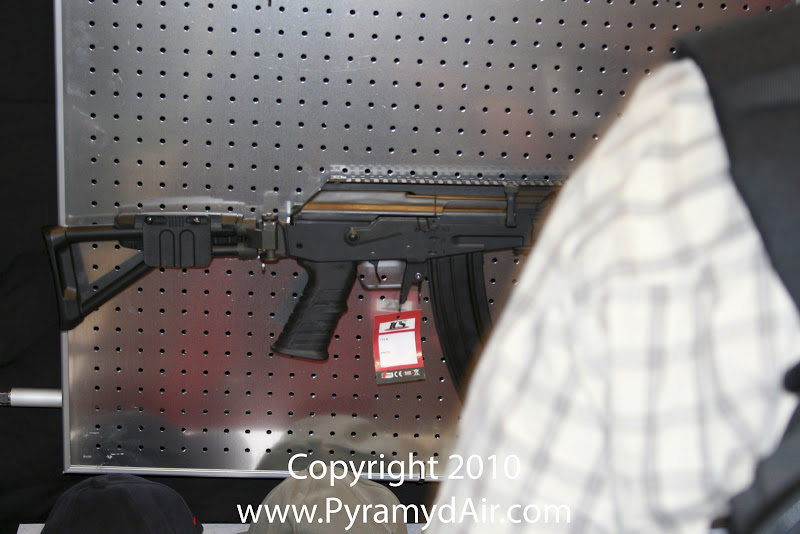 This dude straight-up SHOULDER CHECKS my shot!  And he knew too.  I could tell, just by looking at the plaid on his shirt coupled with a silly sweater vest, that he did it ON PURPOSE. I actually had several other shots with some portion of his existence ruining the image, but I deleted them prior to the realization that I should save them and write to the world about his petty behavior.

SHAME ON YOU, SIR.

I don't know what I did to this guy, but he sure had it in for me. Or maybe he just had his head up in dark places and was, therefore,  simply just "situationally unaware."  I'll let you decide.

I'm just telling you how it went down in the Vegas Town.

Plenty more Shot Show 2011 content headed your way this week.  More from KWA, Cybergun, KRISS & SPHINX, plus a few shots of the Pantac and Umarex Booths.  Oh yeah, I hung out with Brian aka "Rick Holt" aka Mr. Echo1 on Sunday at the Desert Fox MOUT Facility.  It was here where we not only shot some BBs in the same direction as some bad guys, but we had a little photo sesh with the new Echo1 M240 Bravo Airsoft HEAVY machine gun, as well as the new Robinson Arms XCR AEG by Echo1 all decked out with goodies, including the SEXY, new and very licensed Surefire mock suppressor from MadBull.