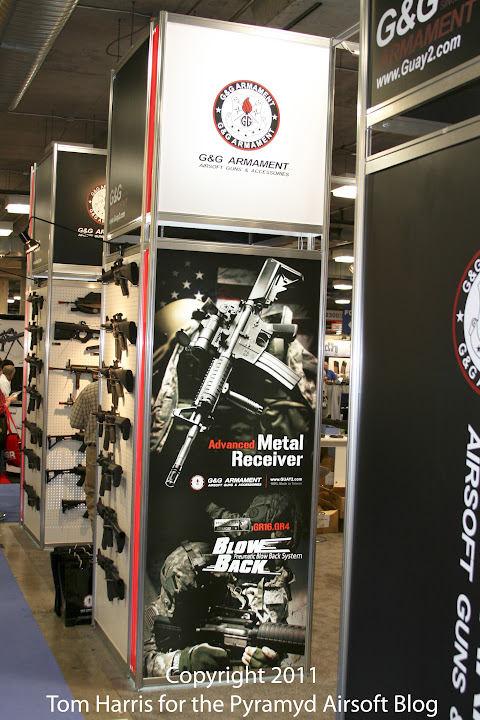 So my brother, Todd, & I invited ourselves to the G&G Armament Booth party happening at this year's Shot Show back in January to see what all the fuss was about. This year being my first Shot Show experience and not knowing my rear end from a hot rock, I didn't think about making appointments to meet with the various companies that I wanted to see, so when I got there, they were swamped and didn't really have anyone available to chat with me. With my limited time budget, I simply had to snoop around on my own to see what they had on display.

Suffice to say, they had quite a few guns on display.  Some new.  Some not-so-new.  Either way, I snapped a few shots of things that caught my eye.

I will selfishly admit that there were some items that I did not take photos of because I was not personally interested in them, but I realize now that I wasn't really attending this show for ONLY me.  It is for you readers out there as well, so I apologize for being lame and selfish.  Despite there being a ton of photos from this year's show, expect even more next year so that I can provide as close to a complete report of the Airsoft activity there at Shot Show as I possibly can.

Anyway, enough blabbering.  Let's get some of the nice Airsoft AEGs that G&G Armament had to offer. 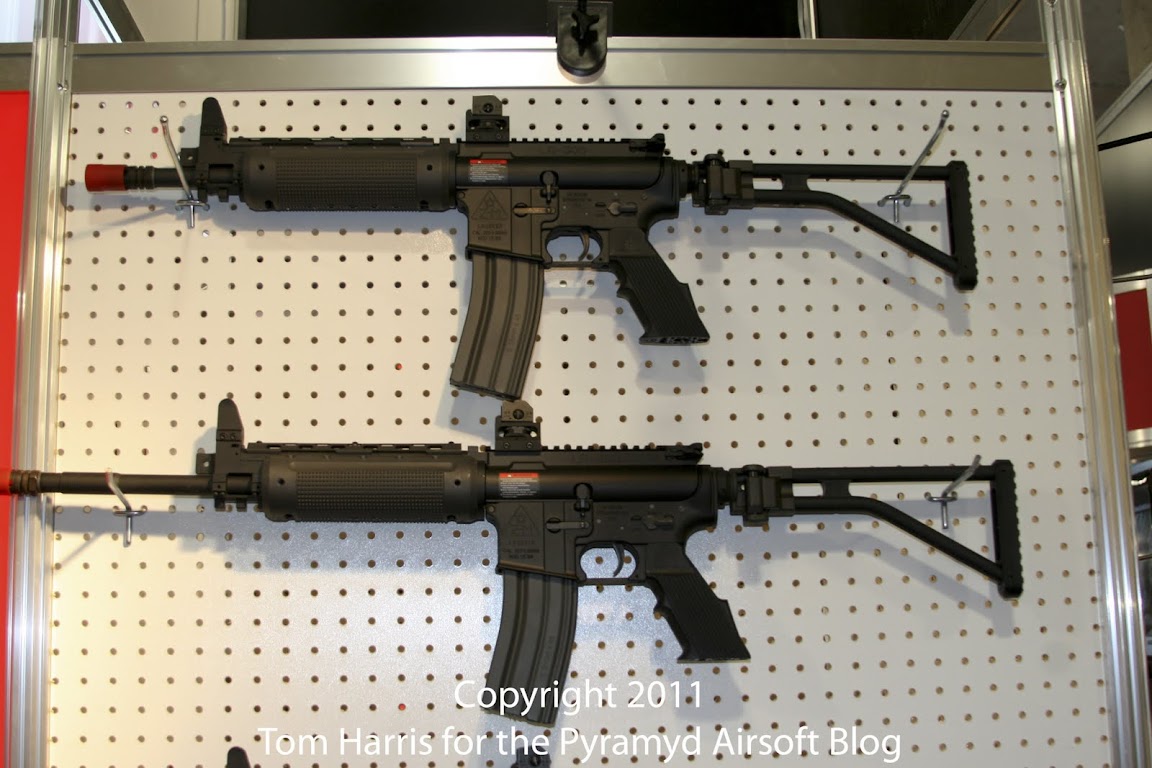 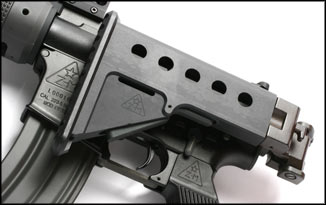 Photo: G&G Armament LR300 SR from G&G's Official WebsiteG&G Armament is also making the LR300 SR (Short Rifle) which has what I would call ZM's signature folding stock on it.  All the G&G Armament LR300 models are officially sub-licensed from a company called, "Evolution," who holds the world-wide licensing rights to the company responsible for producing the real steel LR300s, ZM Weapons. From what I understand, G&G's arrangement with Evolution is very similar to what Cybergun and Umarex are doing where they hold the license to the trademarks, and then they sub-license to other manufacturers like G&G, King Arms & VFC, for example, to use official trademarks on their guns. The LR300s were posted up near what I'm calling the front entrance to their booth. Truth be told, their booth was located in such a way that one could enter from three of the four sides to their large Shot Show real estate, but I'm going to declare the side that I entered from the front for the sake of the flow of content in this particular blog.

In any event, with the folding stock feature alone, the G&G Armament LR300 AEGs are going to make great options for CQB or MOUT facility games where the space you're engaging your targets (and they are engaging you) is going to be limited to one degree or another.  Obviously, the G&G LR300 Shorty is going to be the best option because it not only has the folding stock, but also the shorter barrel, to alleviate some of the difficulty one can run into when trying to manipulate their Airsoft gun in a close quarters environment. 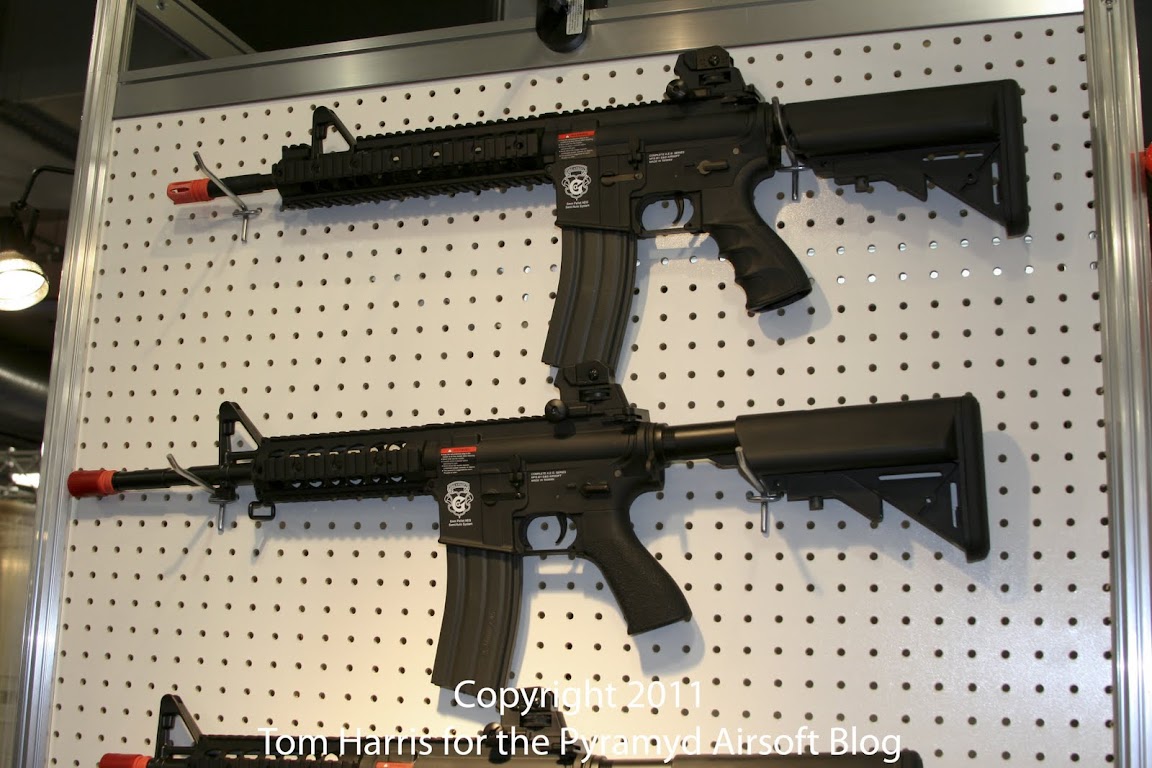 Here are some G&G Armament GR15 Raider Electric Blowback rifles.  Not really "new" per se, but not really anything you can do about it now, is there?  I've already posted the picture.  Sorry. 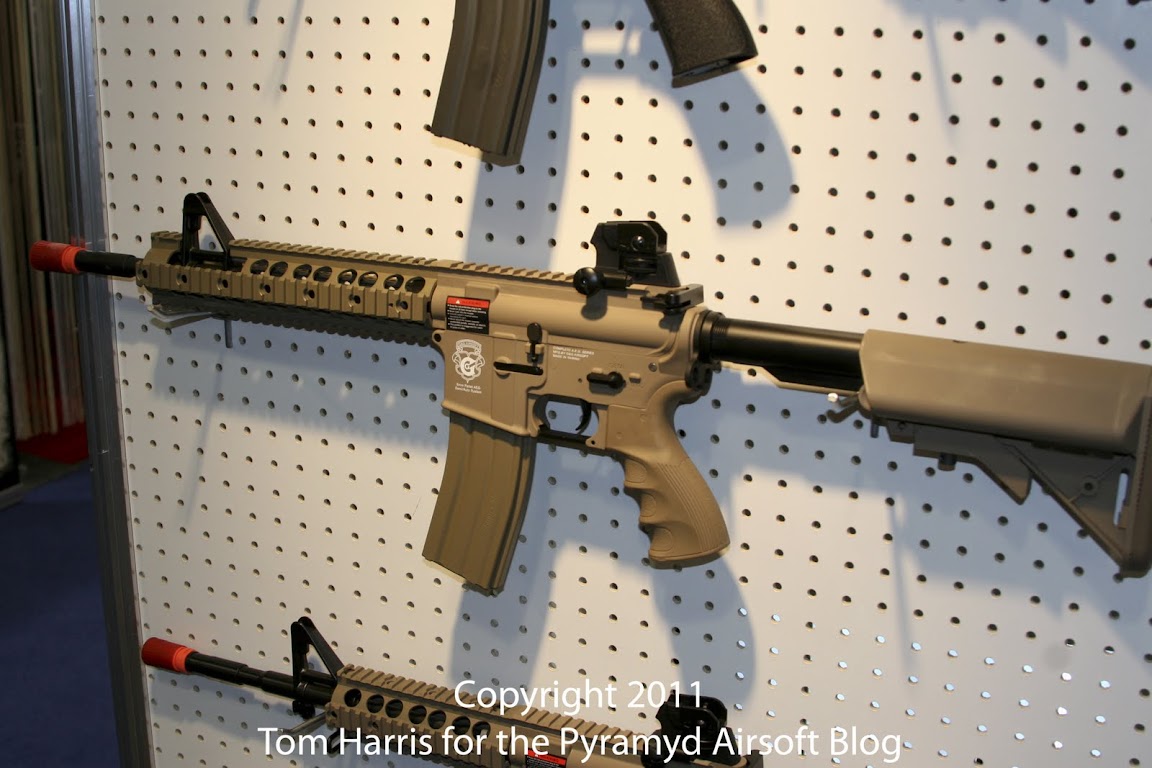 The G&G GR15 DST XL Raider. This is what I'm pretty sure is the same G&G Armament GR15 Raider I mentioned above, only in tan. Just a theory. 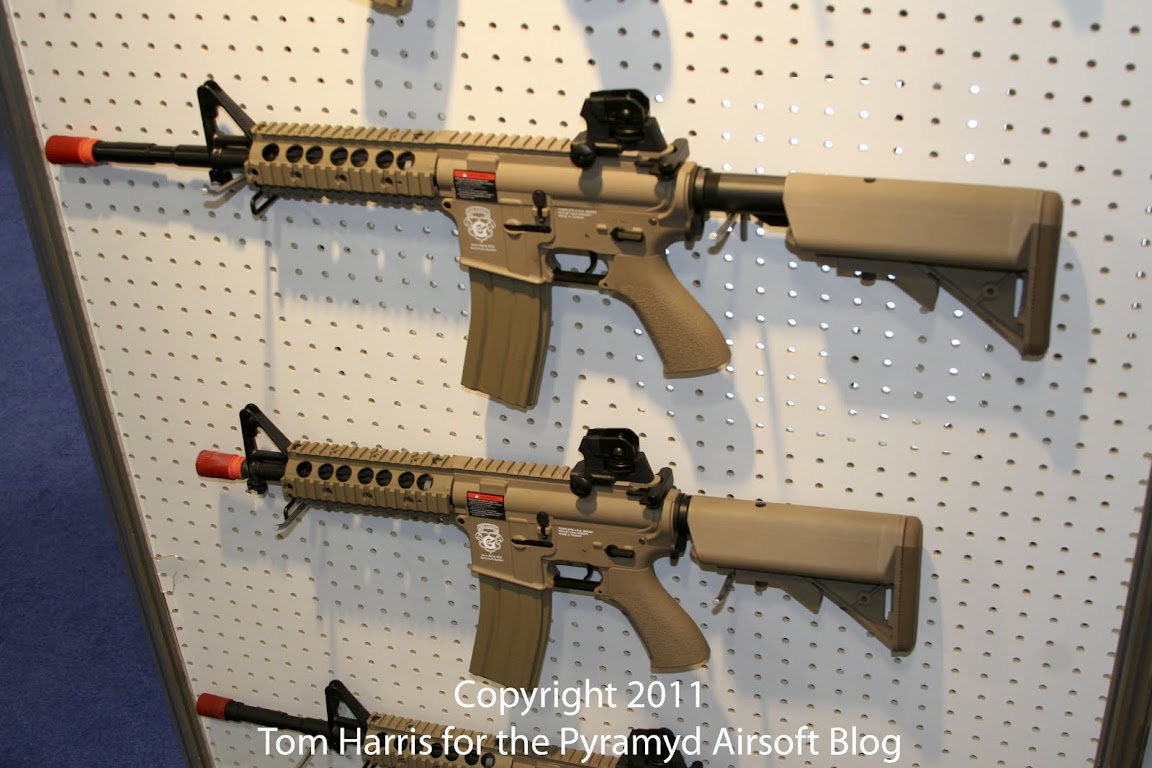 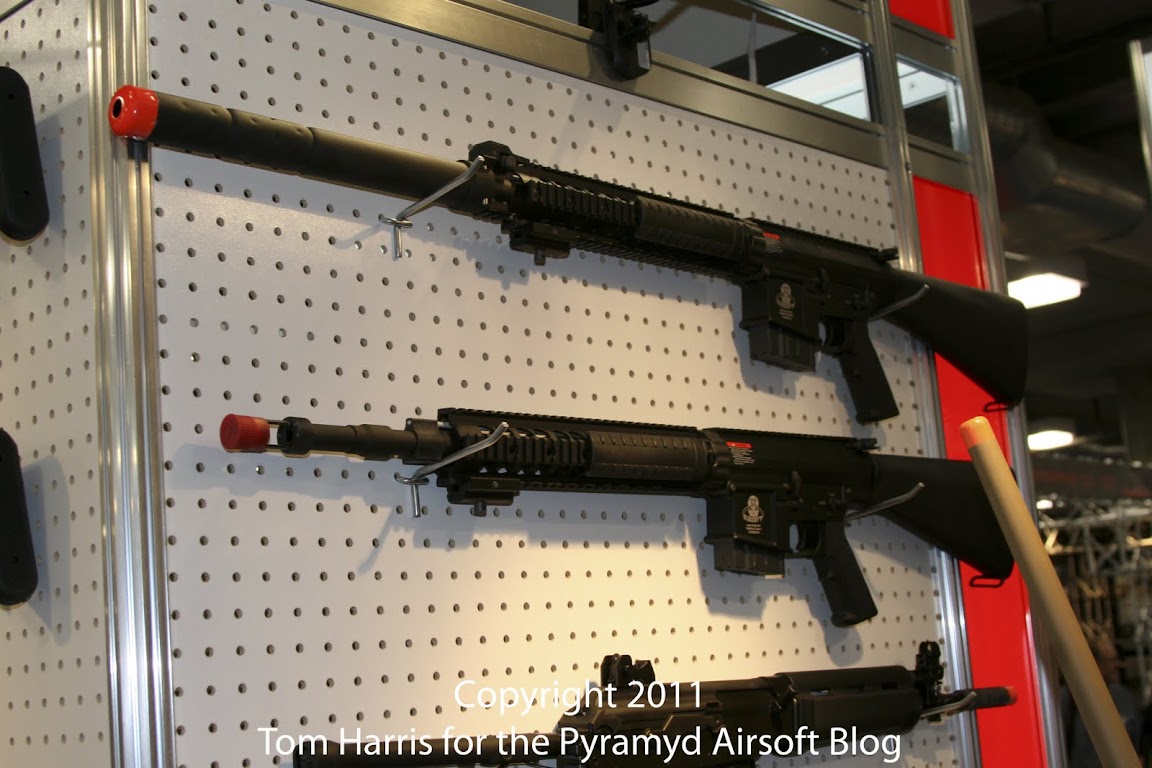 Two options for those of you, like me, who love the SR25 series. The G&G Armament GR25 Semi-Automatic Sniper Rifle (top) & the G&G GR25 SPR, or Special Purpose Rifle (bottom).  The GR25 Sniper Rifle is more of a true SR25/M110 SASS replica with the Quick Detach (QD) mock suppressor, whereas the SPR sports pretty much the same body style as the Sniper version, but if you're paying even just a little attention to the image, you can see that the SPR has a different style of flash hider, more commonly seen on the SPRs that I've seen in the past.  Pick your poison.  For those of you who are digging these rifles AND happen to be interested in the new PolarStar Fusion Engine Drop-in Kits I've been discussing here on the Pyramyd Airsoft Blog lately, then you're in luck.  The G&G SR25 series, unlike the Classic Army SR25, G&P & Echo1 versions, uses the standard-length lower receivers, rather than the extended-length lowers found on the three others I just mentioned.  THEREFORE, PolarStar's new Fusion Engines will fit just fine, and have already been tested by the manufacturer.  How do I know this?  Because it's my job to know.  Ok, I admit, I'm not that cool.  I've known this, along with many others, for a little while now.  But just for proof, here's a photo of the G&G GR25 with the PolarStar HPA Fusion Engine... 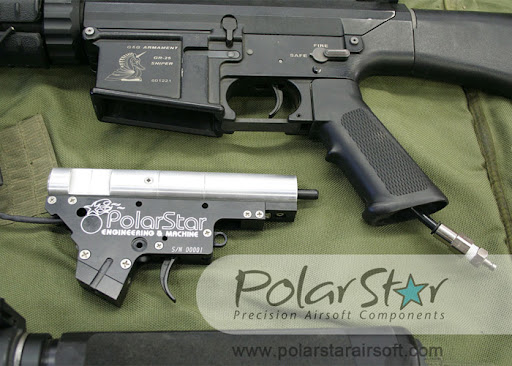 As this is only part one of two, I'm going to end this portion now.  But I will have more on the G&G M14 EBR that was very nice! Along with some sweet AEG options for the ladies!!! (Per Jay-Z aka Young aka Hova aka Hove, "Ladies is pimps, too")

Plus a glimpse of the WA2000 Sniper Rifle that G&G had on display as well.

Airsoft. It's why I wake up in the morning (even on Mondays).
Newer Post Older Post Home