So I was asked to check out the Gameface AK-47 Airsoft AEG and then provide my honest thoughts, which can be a very dangerous thing to do with me because I usually have no issues about cutting the crap and giving a no-B.S.* Assessment. *By "B.S.," I of course mean Bologna Sandwich. I prefer Roast Beef Sandwiches. 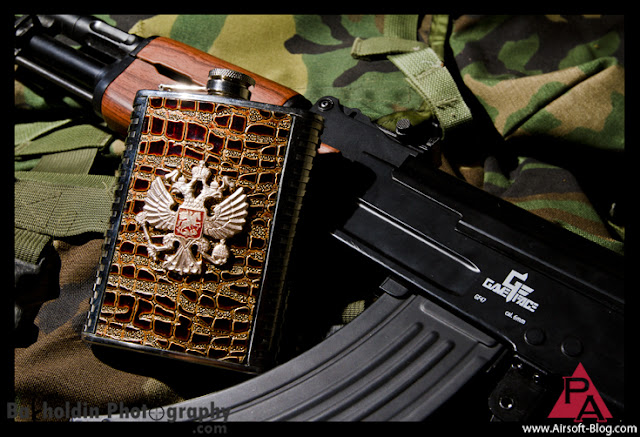 Also, a message to the trolls: neither Pyramyd Air, Dave Bakholdin, nor Tom Harris Media condones the consumption of alcohol before or during the operation of weapons, whether they be Airsoft or actual firearms.  That would be poor decision-making on both our part for condoning it and on yours for doing it.  The Russian flask was simply used as a prop because it looks flippin' awesome under studio lighting and went along with the theme of the famous Russian assault rifle replica featured here on the Pyramyd Airsoft Blog.

Click to get my first impressions of the Gameface AK-47 AEG.

So apparently, Gameface is a subsidiary of Crosman Corp. and word on the street was that they worked with Classic Army to assist them in developing a better class of AEGs than the clear plastic springers they are notorious for. Despite the knowledge that CA was involved in the development of the Gameface GF47, I can't say I had real high expectations for what I'd find when the box arrived from Pyramyd Air. However, I can honestly say that I was pleasantly surprised by what the packaging had in store for me. 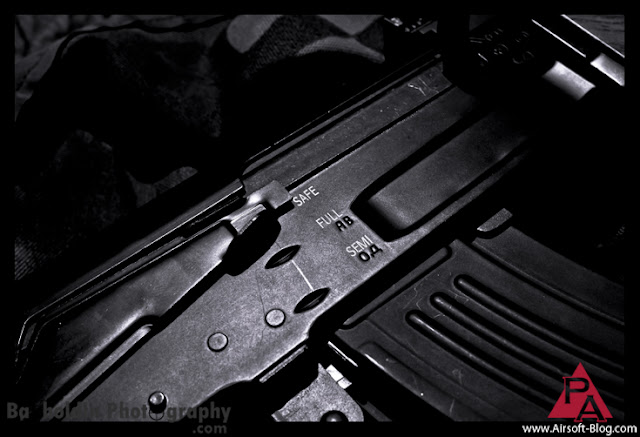 Upon unboxing the Gameface AK-47 AEG, I began my usual inspection process and noted that the appearance of this particular Airsoft AEG didn't seem so bad at all. In fact, I was rather impressed with how sturdy it felt. Naturally, my hopes began to rise and I had to remind myself that while they may not be the absolute best, Classic Army has been very good to me over the years, as I've owned and operated several of their AEGs over time and had very positive experiences with just about all of them. There has been one or two exceptions, but that's another story for another time. 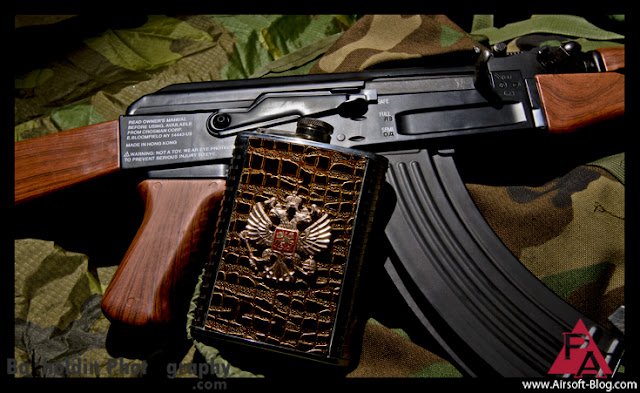 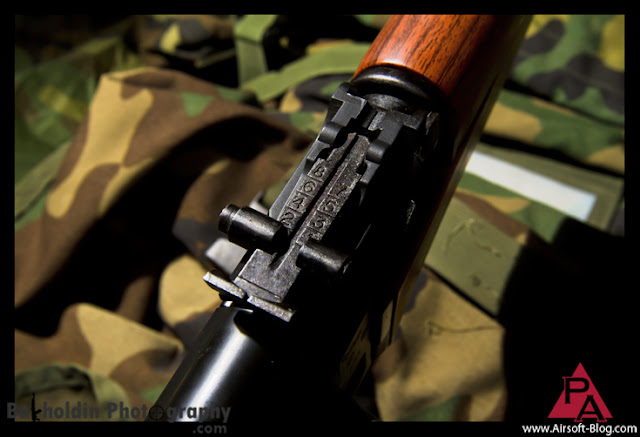 While there wasn't anything extraordinary about the features of the gun that just about any other AK-47 AEG has, the Gameface model wasn't really missing anything that others had on an external basis, either.  I will admit that I was not operating the rifle carefully and accidentally broke off the adjustable rear sight seen in the photo above (after the photo was taken, of course).  So fair warning, don't continuously flip the rear sight up and down a bunch of times. It's not really designed for this. The knob on the numbered metal piece is meant to be slid up or down on the surface of that plate, which will allow the operator to adjust their sights for elevation.

As with most AK-47 AEGs, the Gameface GF47 comes with a high-capacity AK magazine with a winder on the bottom of the mag. Once I got done touching, feeling, and/or believing in this gun, I was eager to see what it had going on underneath the hood, which is a true test of a good gun.  Aesthetics are certainly important in my book, but when I get on the field and there are lots of OPFOR to shoot at, I'd rather have an ugly gun that shoots true rather than a really sexy gun that couldn't hit the proverbial side of a barn.  Know what I mean, comrades?  So, next time I discuss the Gameface AK-47 AEG, I'll shed some light on the gun's internals components and let you know what I found.  Any guesses on whether I found good things or bad things inside the gear box?

I'll give you a hint: yes.  ("Yes," is the hint).  That was my attempt at being funny, but I'm afraid it may have come out as more annoying than humorous.  Sorry in advance.