I didn't quite have all the stars in alignment for me on Saturday so that I could update the blog during the ACA Expo, but here are some shots of the event for your viewing pleasure. 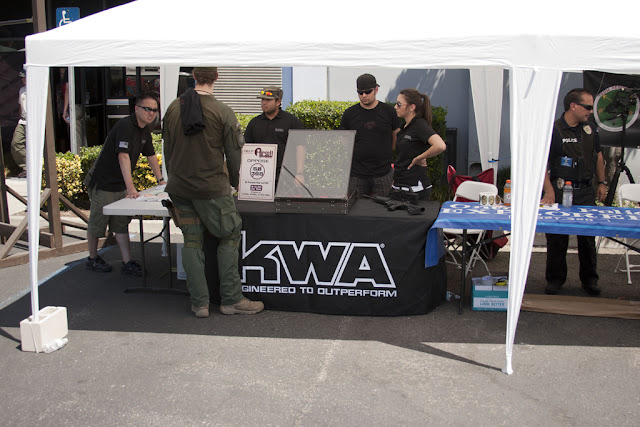 Mike from KWA giving my brother, Todd, the low-down on the new KWA guns like the HK45 Gas Blowback Pistol I recently featured on the Pyramyd Airsoft Blog. For those of you that are wondering, Todd is, in fact, wearing a set of TDU Ripstop Pants with custom embroidery from 5.11 Tactical Series and a Voodoo Tactical Assault Shirt. And even though he knows he looks good, he doesn't mind when other people tell him so.

The local Police Explorer Program had a booth set up.

Chronic Tacos provided some "Scrumtralescent" carne asada tacos with lime, and Hooters was also out serving up their famous chicken wings as part of the free lunch.

The Airsoft League is a tactical skills-based target-shooting competition.

There was a shooting range available for attendees to test out some of the new guns from vendors like KWA and Elite Force.

Speaking of Elite Force, Cliff and Andy took a tiny little road trip from Umarex/Elite Force headquarters in Arkansas to show off their latest and greatest Airsoft AEGs at the event.

Two of their shining stars among the new Elite Force Competition Series are the M4 CQB and M4 Carbine from ARES.

Did you know that the Elite Force M4 CQB features an integrated RIS and comes with the stubby foregrip? Oh you didn't!!?? Well, you do now.

Just a little close-up of the new logo of the Elite Foce trades on the receiver.

Elite Force also has a new, standard-length carbine rifle as well for more of that classic look.

Here's something exciting for the G36 fans out there: two new G36 options from Elite Force and Ares in tan and black.

Where all the madness went down on Saturday: Insight Interactive Airsoft CQB Arena.

Watch out for flying shirts. Tons of raffle prizes were giving out from Pyramyd Air, 5.11 Tactical Series, Elite Force, Voodoo Tactical, KWA and many more.

There was a full video production crew on hand with some high end gear recording all the action of the intense ACA games.


Here are a few shots of Insight Interactive's field layout specially designed for the ACA tournament.
The day ended with a raffle and many Airsoft players going home happy with some sweet prizes, like $100 Gift Card to Pyramyd Air 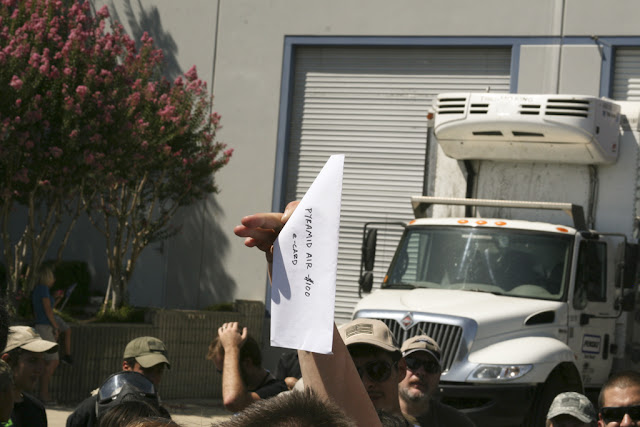 Here's our winner, coming up to collect his prize.

If I were this dude, I'd be pretty stoked to win a Multicam RUSH 12 backpack from 5.11 Tactical as well.

While the competition portion of day had its rough patches, most of that can be chalked up to this being the first event of its kind on such a large-scale production level, so I think many of those issues can be smoothed out for future events. Overall, I was highly impressed with what the event organizers had in mind and after some fine-tuning of things, I wouldn't hesitate to participate in this event again. The event organizers are more than welcome to contact me at their leisure to receive a more detailed level of constructive feedback, should they so desire it.

Highlights from the tournament included Team 5.11 Tactical taking 3rd Place in the tournament despite yours truly going down in the first game of the day with a pretty awesome case of heat exhaustion. Temperatures reached 107 degrees Fahrenheit in our area and I haven't been exactly living an active lifestyle over the last few weeks because of a few major life transitions taking up my exercise time to prepare for those things. In short, I'm kind of a fatty right now. Anyway, there were lots of vendors showing off tons of cool new Airsoft guns and gear and I got to spend some time chatting with Cliff and Andy from Elite Force, who gave me the scoop on exciting new things coming up from them, PLUS there was free game play open to the public throughout the event, so I got to see and meet a lot of new faces who love to play Airsoft as well. All-in-all, it was a good day and an exciting glimpse of what may be in store for the the future of competitive Airsoft. I give tremendously mad props to David Karstens (ACA Director) and Jonathon Nicastro (Owner of Insight Interactive) for all their hard work in putting the event together and I hope they realize that their efforts did not go unnoticed by this lil' ol' Airsoft blogger.

Till next time, I will leave you with this parting word, said in a whisper voice...