As it turns out, I find myself increasingly attracted to the KRISS Vector series of submachine guns. 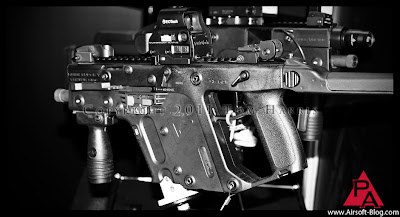 So I thought instead of just being increasingly attracted to it, I would also tell people that I'm increasingly attracted to it here on the Pyramyd Airsoft Blog.  Thus, I dug up some old photos from my fantastical adventures with my brother, Todd, at Shot Show 2011 back in January of this year to reminisce about the initial introduction between the KRISS Super V Vector submachine gun and I at the KWA Performance Industries Booth, which was conveniently located just across the aisle from the actual KRISS Systems booth, so as to allow me to go back and forth between the two, breathing heavily the glass display cases, the booth staff and the guns themselves, all with stale breath composed primarily of the odors from several meals at Chipotle and massive amounts of booze consumed during the prior evenings adventures at various adult beverage establishments throughout the world-famous Las Vegas Strip.  I did try brushing my teeth and using Listerine to help mask my activities, but when you combine the awesome powers of Chipotle and delicious Fat Tire ale on tap from a sweet Irish pub in the New York New York, it's nearly impossible to combat such forces.


I would like to issue a delayed apology to the KWA and KRISS/SPHINX/DEFIANCE staff who had to endure my foul, hot-garbage breath.  I'd especially like to apologize to the KRISS Vector guns I fondled while breathing said hot-garbage breath on them, as well as the beautiful SPHINX pistols and DEFIANCE suppressors.

I hope they'll forgive me and just chalk it up to "good times in The Vegas."

So anyway,
For the few of you that read my blog, but don't keep up with the first-person shooter gaming circuit, the KRISS Vector became rather popular among the gaming & Airsoft crowd when the French-designed, Swiss-made submachine gun appeared in the super extra popular video game, Call of Duty: Modern Warfare 2 as one of the weapon options players could use to "pwn" other players while streaming live game play over a LAN or Wi-Fi internet connection, using audio headphones equipped with microphones.  These headsets allow COD gamers to taunt either their friends or total strangers somewhat anonymously using harsh words against the other's mothers, sisters, and/or favorite Catholic priests after "killing" the opponent using the KRISS Vector SMG.  Good clean fun for the whole family.  I should note that it was not the beautifully precision-engineered Vector which caused these individuals to behave this way (The Swiss like to keep it in neutral).  It was probably Eminem, Marilyn Manson, R-Rated Movies and/or Satan himself that convince these individuals to say things that would make Charles Manson blush.  Probably a combination of all four.  It was definitely NOT the result of poor or non-existent parenting.  That's never the case.

So with that tiny background blurb, check out my KRISS photo update to see why so many people, including Airsoft bloggers like me, think this submachine gun is so groovy.

Will the real KRISS Vector please stand up? 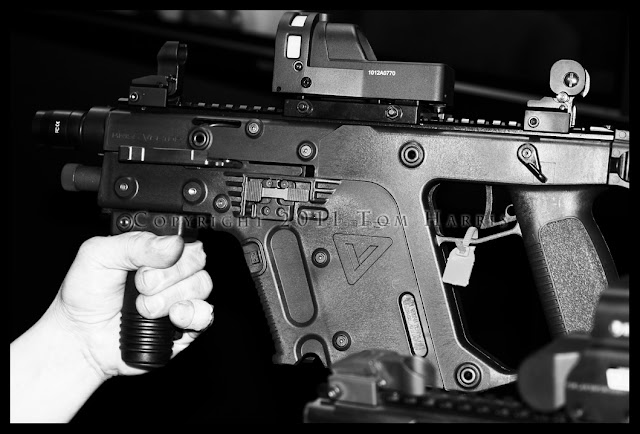 ^Oh, well hello there, my old, Swiss submachine gun friend.  It's lovely to see you again.

I sometimes snicker to myself and call this the Pinocchio model because it looks like he lied and told some M4 carbines that he, too, was just your average carbine rifle...but no.  He is not.  He still expels .45 ACP handgun rounds just like the other KRISS Vector series SMGs.  However, if you're a civie, he only does so on semi-automatic, which I believe doesn't make that model a true submachine gun, but close enough for my tastes.  I'm willing to give it "honorary SMG" status.  Only the trigger finger of those the BATFE deems worthy can release the Class 3/SOT firearm fury of full auto with the KRISS Super V Vector 16" CRB/SO or the 5.5" SRB/SO.

Quick fact time: CRB refers to the term, "Carbine," while "SBR" refers to, "Short Barrel Rifle" which pretty much covers most rifles and SMGs with a barrel of less than 16" and is, therefore, likely subject to NFA registration, although if you're taking my advice on this subject, you are not a good judge of expert advice.  Please consult your most trusted FFL dealer for the official scoop.

The two models above were actually featured at the KRISS booth, btw.

This next one, is one I'm sure at least one or two of you have seen on other sites, but I'm posting it my version anyway.  This was the KRISS & SPHINX models display at the KWA booth. 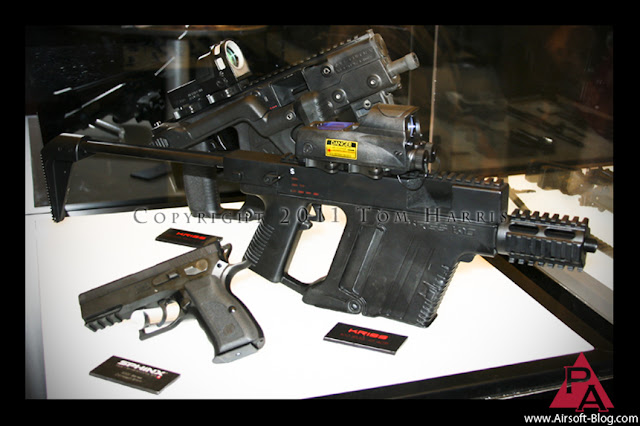 KWA's Shot Show 2011 display not only featured the KRISS Vector SMG (back), but also the new KRISS K10 model (front) and the SPHINX 3000 Compact 9mm pistol, which was a dream to hold (twss).   At the time of Shot Show, I believe it was still a bit unclear as to whether KWA was going to produce the Vector or the K10 or both.  However, since then, I've had several conversations with KWA reps who have only discussed the Vector being in developed.  I also did not ask about the K10 specifically, primarily because I don't care about it.  I'm sorry.  But I like the Vector better.  It should be noted, though, for those of you that DO like the K10 that simply because KWA has not discussed the K10 with me, does NOT mean they are not also working on that version as well.
They do an outstanding job of keeping secrets from me.

I'm hoping that they are also holding out on news that they've been developing an ATF-approved mock suppressor for Airsoft guns which replicates the design of the sexy DEFIANCE cans that were also on display at the KRISS booth. 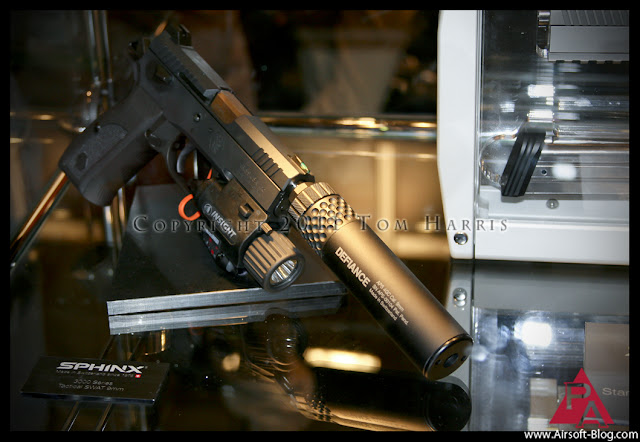 Don't you dare tell me that setup doesn't look legit.  The only thing sweeter would be to cover the entire SPHINX pistol, DEFIANCE can and Insight torch with pure sugar.   Maybe add a maraschino cherry on top for good measure.  I really wouldn't recommend that, unless you've just got a bunch of cash to burn on a new setup or are extremely skilled at cleaning firearms and NFA suppressors.

Here's a SPHINX 3000 series handgun with compensator, suspended in mid air gracefully by the hand of Christophe Guignard, VP of KRISS Systems SA.  Guess what country he's from? 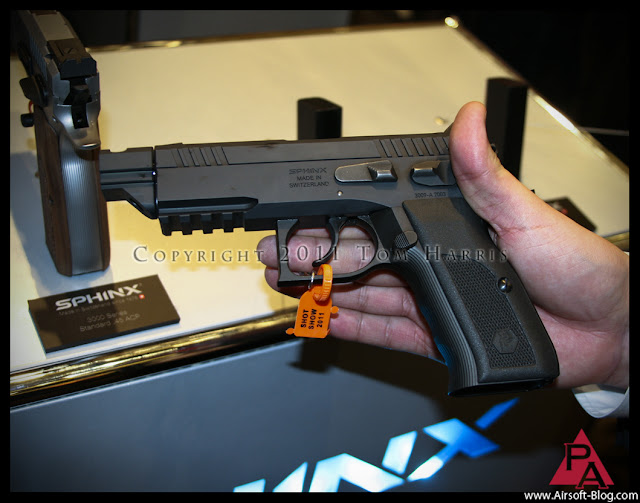 And for comparative purposes, here is the same gun, minus the compensator and propped up in a glass display case located at the KWA booth across the aisle from the KRISS SPHINX DEFIANCE booth. 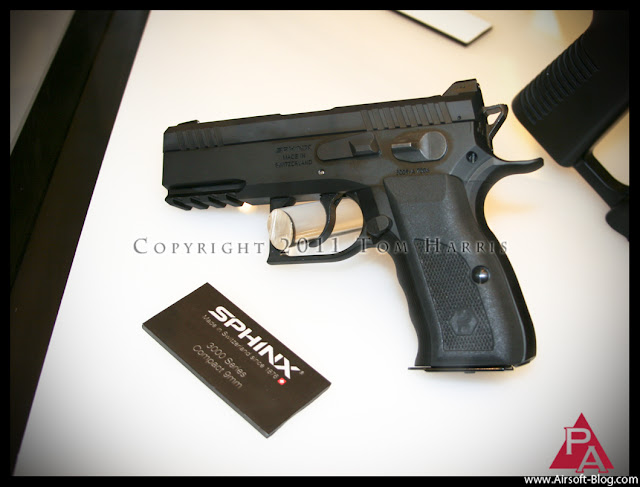 I am pretty sure the guns at the KWA booth were the real deal because I seem to recall someone at some point saying some thing about KWA not having some Airsoft prototypes available for some Shot Show.  So I think they just borrowed some real guns from their Swiss homies.

Oh yea.  So I guess I should actually provide some KWA KRISS news, since I took the time to write "Airsoft News Update" in the title of this entry.  Unfortunately, you'll have to wait.  I know, I know.  What kind of rotten, Airsoft-blogging scoundrel am I to tease you like that?  Well...I'm the kind of rotten, Airsoft-blogging scoundrel that doesn't lose sleep at night teasing you like that.  At least you got to see some photos, albeit crappy quality because I didn't know what I was doing back then.  I still don't know what I'm doing now either, but I'm better at faking it in Photoshop.  I hope you still love me.  I will give you some KRISS news as soon as I can though.  Certain stars must align for this marvelous celestrial event to occur, however.  You've waited this long, so just wait longer.

OK wait.  Don't be mad.  How about if I told you that Pyramyd Air has received a big ol' shipment of KWA Adaptive Training Pistols?  You know, the ATP?  I've been discussing the ATP here on the Pyramyd Airsoft Blog for quite some time.  In fact, since Shot Show 2011 as it were. 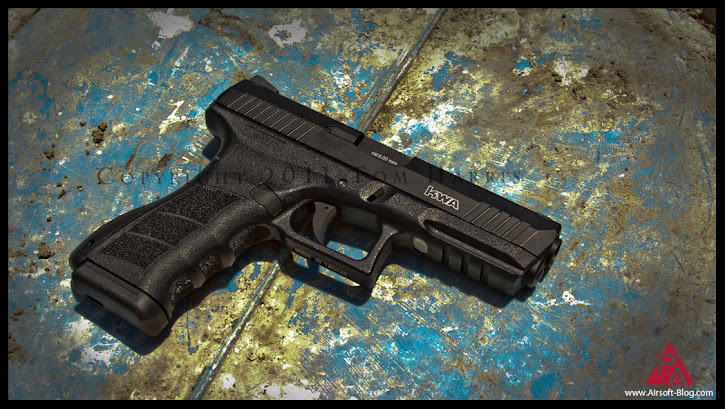 Would that make you feel better?  Hard to argue with that price, too, when one considers just what a hot item the ATP is.  It may be time for me to "pull the trigger" *rimshot* on buying this bad boy for my personal collection.