Photos From the Association of Competitive Airsoft Expo


So I thought I'd post some photos from the tournament portion of the Association of Competitive Airsoft (ACA) Expo that I attended last Saturday. These photos were taken by ACA staff (not me) and have been used with permission. And technically, I'm pretty sure they're all just still shots taken from all the video footage they were shooting throughout the game play. While these photos were only the first batch and I'm sure they have a ton more, but it would seem at least for the time being that the camera really enjoyed capturing the essence of Team 5.11 Tactical in action. Take a guess who those handsome fellows in the OD Green Ripstop TDUs are that show up in the first half of the ACA Expo photo gallery (Click the link below). Yup. That'd be us. Now, I'm not saying we were the best-looking guys there, but my boys & I certainly wouldn't argue with you if you said so yourself and I doubt the camera would, either. Speaking of my teamies, Todd, SSG. Steve, Luke & Trent: you guys not only looked good in green, but you make for an outstanding fire team. I hope we can ball it up again together at the next one. Also, sorry for getting heat stroke in the first freakin' game, like a chump. Who does that?! Seriously. People that shouldn't be competing in stuff, that's for sure.

So let's talk about this next photo for a second... 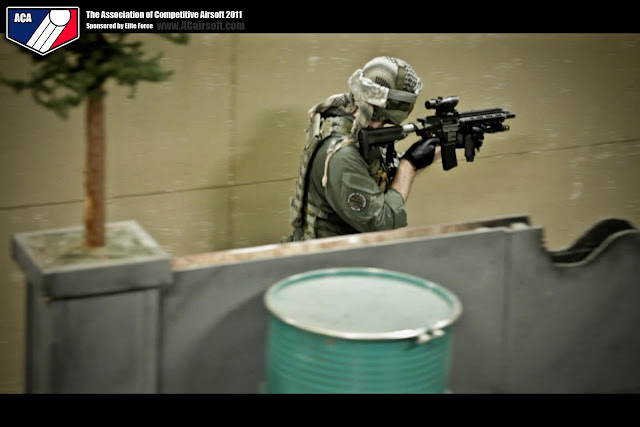 You might be wondering what kind of custom "Airsoft jousting stick" it is that this Knight-in-Shining-5.11-VTAC-Armor is using to strike fear into the hearts of his Airsoft enemies.  Well, wonder no longer, my friend.  That'd be the Elite Force VFC HK416 CQB with a number of delectable Airsoft accessories affixed to it.  In case you were curious about what those accessories are, I'll tell you right now so as not to keep you waiting for the epic answer:

Sun Optics Green Reticle ACOG-style optic
UTG Vertical Fore-grip
UTG Green Laser with pressure pad
UTG Combat IRB Xenon 260-Lumen Flashlight (On left side of RIS, not in view)
Plus, a VLTOR-style, collapsible EMOD stock from Classic Army, which allows me the ability to run two 11.1V Lithium-Polymer (Li-Po) 1200mAh 20C Airsoft stick batteries in parallel (thanks to a y-connector I made, fitted with Deans connectors), effectively doubling my battery life (2400mAh) while running that AEG.

If you've seen my review of the Elite Force VFC HK416, then you'll know why I selected this rifle as my primary weapon to compete with when there were not only bragging rights on the line, but awesome prizes for the winners (Brand new AEGs from Elite Force, who coincidentally happens to be the title sponsor of the 2011 ACA season).  I did not choose this gun because of who the sponsor was.  I chose it because of it's outstanding reliability, as proven for the last year or so since I've had this thing.  Now, in the essence of full disclosure, I did, ironically, strip the piston in the very final game of the day when we were playing the team who would end up taking first place in the tournament, but that's just how my day was going.  So, I'll be re-opening the gearbox for the first time since last year to replace that piston and, of course, I'll post the pictures up on the blog so that you can see what kind of damage went on underneath the hood.  Regardless that the piston stripped in the middle of the last game, I'd still recommend this gun to anyone.  Like I said, I haven't had to touch the gun otherwise since I tuned it up last year, and I've been using several times a month since then.