New ATAC Lights from 5.11 Tactical Series coming soon.  Here's a shot of the lights in their packaging. 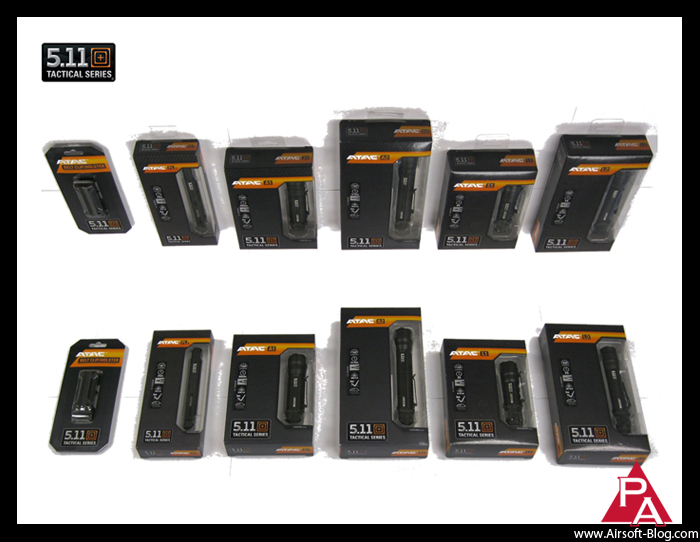 Check out some specs on these new 5.11 ATAC lights PLUS some interesting news


Five new torches, each with a different level of brightness.  Oh, and before I forget: 4 of the 5 new 5.11 ATAC lights have a STROBE mode in addition to a High and Low power, not to mention a Momentary On/Off button.

The ATAC flashlights from 5.11 will come in the following brightness levels:

*These are estimated values.  The final production units will be tested according to ANSI FL1 Standard.

I just got confirmed details from 5.11 stating that the lights are all roughly 1" tubes (24mm to be precise), so they will fit a standard 1" scope ring for mounting on your favorite weapon.

It's unclear whether they will accept any after-market remote pressure switches, but 5.11 does plan to release a later version of these lights which will feature integrated weapon-mounting capabilities.

You'll also notice in the picture above on the left that there's a sixth item pictured, while I've only mentioned five ATAC lights.  That sixth item would be the Belt Clip/Holster for these lights.  From the pictures I've seen behind the scenes, this thing looks pretty sweet AND I'm told it will also attach to any MOLLE web platform.

So there's a brief teaser on the new 5.11 ATAC lights.  I'll update you here on the Pyramyd Airsoft Blog when I get more intel to share.

In other 5.11 news, former Marine Corps Captain, Tom Davin, will be taking over the day-to-day responsibilities as CEO of 5.11 Tactical, allowing visionary entrepreneur, Dan Costa, a chance to take a bit of a back seat and relax for a minute or two so that he can enjoy some of the many fruits of his labor.

Davin sports a pretty boring resume, I must say.  Davin received his education at barely-accredited institutions like Duke University and Harvard Business School and after serving his country as a Captain in the Marine Corps, he worked at various venture capital firms and publicly traded companies like Pepsi, Taco Bell, Oakley, Inc., etc., serving in roles like Chief Operating Officer, Chairman of the Board of Directors, Managing Partner, Director of Mergers & Acquisitions and other roles just barely above the bottom of the totem pole.  As CEO of the Panda Restaurant Group, which owns Panda Express, he ONLY took the company from $500 million in sales to roughly $1.2 billion.  Yawn.  I hope it's obvious that I've added extreme sarcasm in an attempt to be entertaining.  He's been active on its board for about a year now, so he's already become pretty familiar with the internals of the company, which should help to minimize the learning curve as the new CEO.  Clearly, Mr. Davin has been pretty active and dedicated to winning, so I'm thinking he'll probably do pretty good things for 5.11.