Some of you may recall my little synopsis on the Gameface Classic Army AK-47 AEG a little itty bit ago, where I said some nice things about it in general, so I thought I'd follow up with a little write-up about the internals I found therein.


Check out the good, the bad & the ugly after the jump...

Version three gearbox, common in most Airsoft AK-47s.  You can see Classic Army has left their mark on the Bevel Gear (hint, it's the only gear clearly displaying Classic Army's name on it in the pic).

6.00mm PLASTIC Bushings.  If you're wondering how Gameface was able to get the cost down so cheap for you, the frugal consumer, there's one way, right thuurrrrr...
On the plus side, you can get a glimpse of the inner o-ring installed inside the air nozzle.  This is a handy placement for such an o-ring and I'm surprised that it exists here.  This is exhibit A why you hire experts if you're going to outsource your work.  Classic Army is no stranger to making nice Airsoft guns. 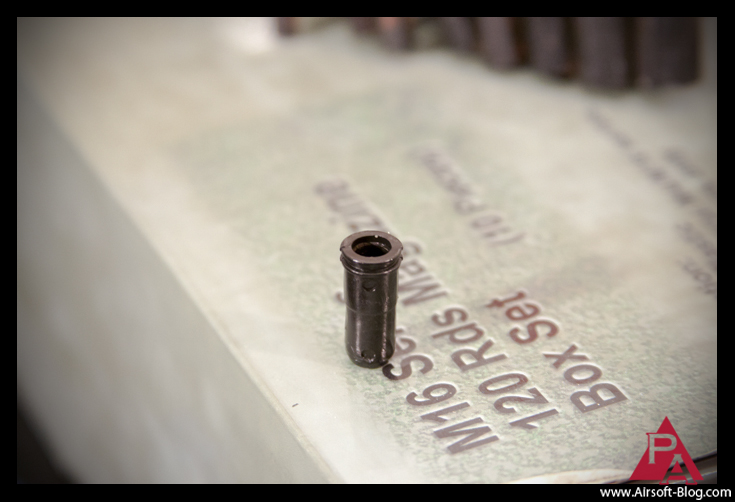 Polycarb piston and piston head.  Nothing too exciting here.  But just thought I'd give you a glimpse.

mmmmmmmmm.  High torque motor.  I never get too excited when I see stock motors that come with most AEGs. 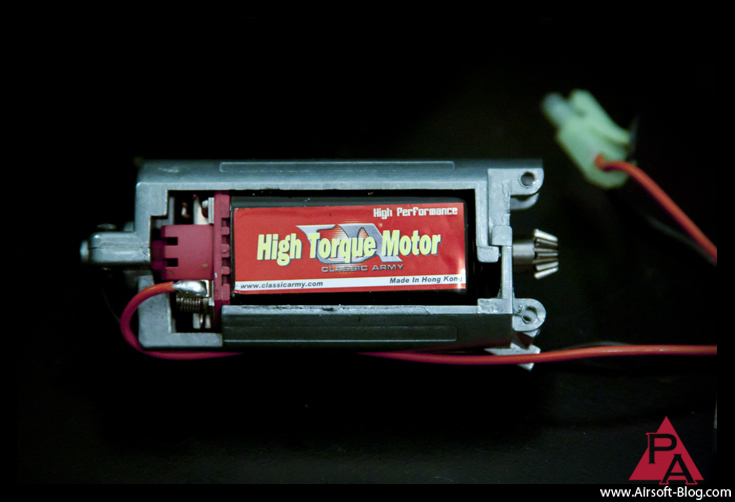 9.5 times out of 10, I replace them with actual high torque motors, with the exception of the Echo1 M240 Bravo.  I have left that beast untouched internally, as it performs flawless as is.  But that's a heartwarming story for another time.

So this can't be an entirely positive review.  One of the things that bugged me about this gun was the amount of effort it took to get to the damn gearbox.  I'm told by my good friend, ArmyofMike, that the cool hipsters are referring to gearboxes as "GB's" these days.  So I guess I'm not "hip" and "with it" but oh well.  Anyway, Gameface pissed me off with their excessive use of bolts & screws & such.  Annoying.  Box on the left are some internal "GB" screws, whereas the box on the left contains all the freakin' screws required to be unscrewed on the externals of the gun.
But I digress...

Here's the hop-up.  Again, nothing too wild and/or zany here.  But a very important element in this equation, so it must be featured.

Note that shiny neon-ish blue inner barrel.  Yea, that'd be plastic.  Again, if you want to save money, you're going to have to pay for it! 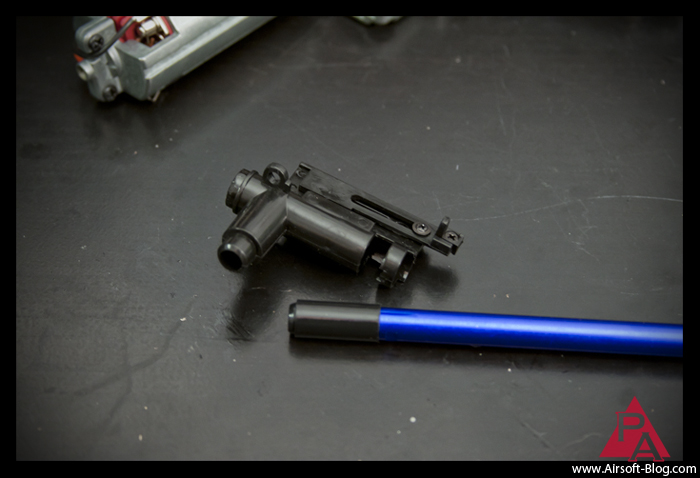 Uses standard AEG bucking, which I'd recommend replacing with a Systema or Guarder bucking, based on personal experience.  I wish I could say either company paid me to say that, but alas. 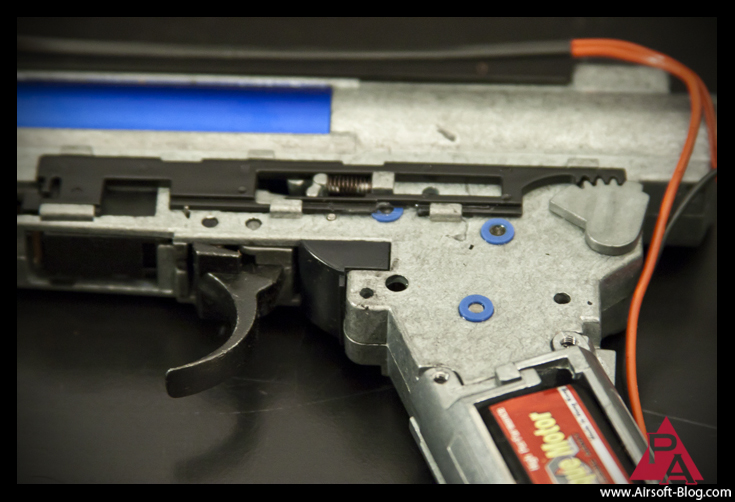 Ah yes, those plastic bushings do look lovely as they glisten under my hideous tungsten desklamp which I shameless used to illuminate my subject(s) in this review.  Note that odd trigger assembly.  Most peculiar. 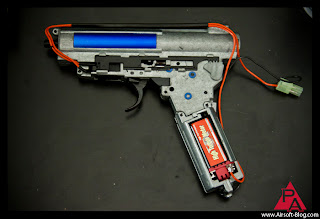 Here again, is your version three "GB," this time from the outside of the GB shell.

Overall, here is my no B.S. Assessment of the Gameface Classic Army AK-47.  If you're that all-in-one bargain hunter hoping for an amazing AEG right out of the box with little to no need for improvements, enhancements and/or otherwise upgraded internals, then I cannot recommend the Gameface AK-47 to you my friend.  I will look into the archives to see if I can't find you something more suitable for your needs.

HOWEVER, if you're like me and going to buy a gun only to rip out all the stock internals and completely revamp the insides with after-marketing parts, then the Gameface AK-47 could be a nice little option for you, as you will save quite a bit of money by tearing out parts of much less value or quality than you would if you were to buy a VFC, for example, and then do the same thing.  I wouldn't go so far as to say you should try and turn this thing into a designated marksman rifle or simply just a super high-powered AEG, but if you're wanting to turn it into a nice <400 FPS assault rifle, then by golly, Miss Molly, I'd say it's a very reasonable option.  That's all.  For now.

Hope for peace.  Prepare for War.