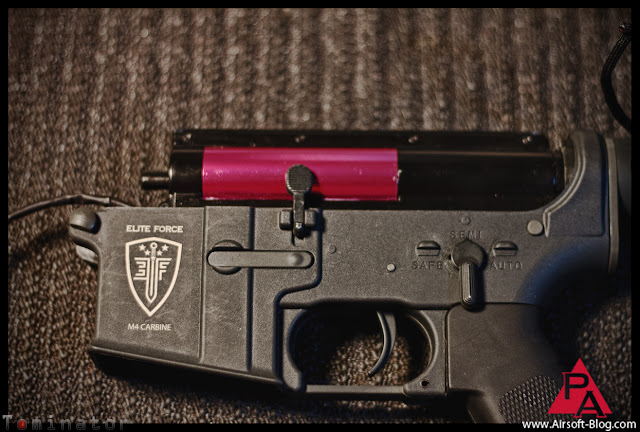 I'm sure my buddies over at Elite Force are going to cringe when they read this, but let's face it: not everyone out there is going to send their gun in under warranty to get it fixed, should an issue arise. Some people just prefer to do the work themselves for whatever reason. So here's a blog for those of us who like to void our Airsoft warranties. No seriously, I'm pretty sure if you take your Elite Force M4A1 Carbine apart, as I am about to show you, you can kiss that sweet Umarex 1-year warranty goodbye. Just a fair warning before you do anything you might regret later.

Check out the full Airsoft AEG takedown tutorial after the jump...

So first up, separate the upper receiver from the lower simply by popping out that pin you see to the very left, sliding it out enough to access the wiring connectors, with you will unplug so as to slide the upper receiver assembly completely off the gun. When you're done, your gun should look like the photo below:

Next, pull the retractable stock lever down and slide the stock completely off of the buffer tube. 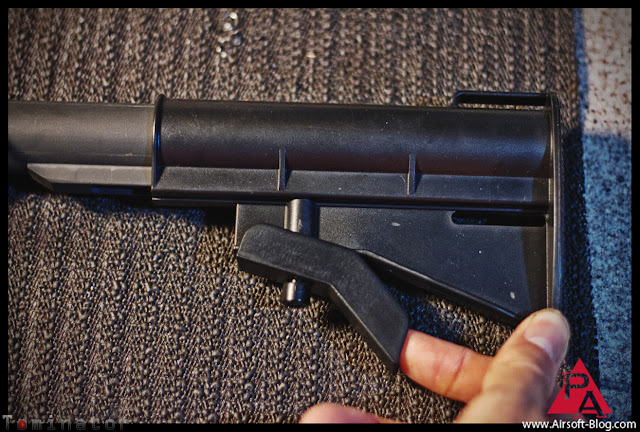 With a small Phillips Head screwdriver, remove the screw seen below, on the bottom of the buffer tube. The buffer tube's end plate will then be removable so that you can access another bolt to remove. 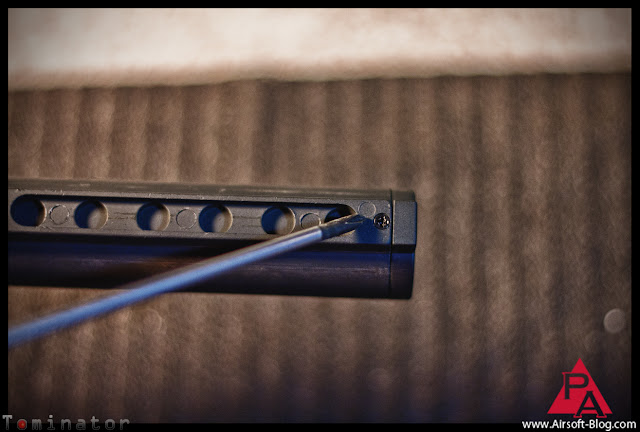 That would be the Phillips Head screw you see there in the buffer tube. 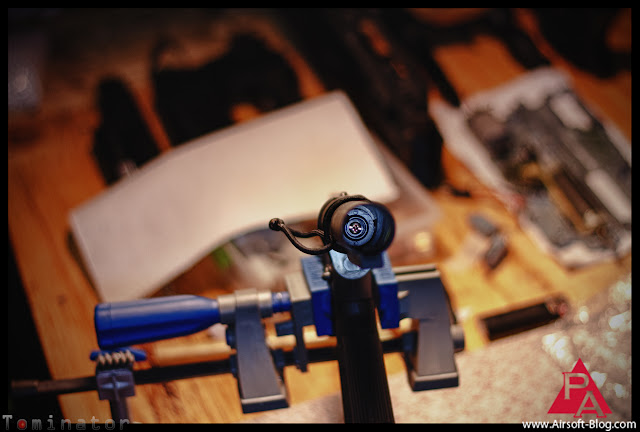 Next, remove the two Phillips screws sitting on each side of the motor height adjustment screw. 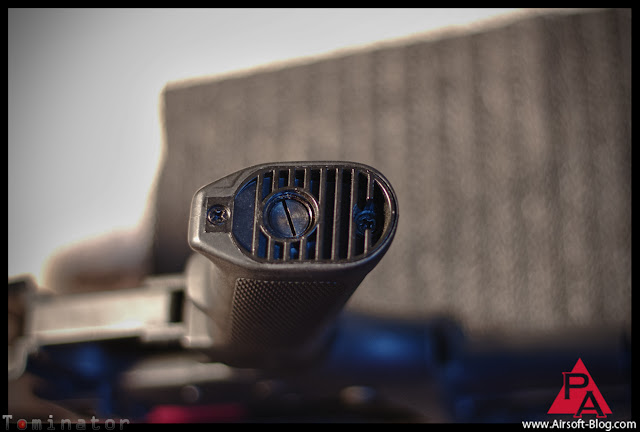 Once those screws are removed and the motor plate has been removed, I like to take a small flathead screwdriver and slip it under the red & black wires to pop off the motor connectors. Be careful not to ruin the shrink wrap tubing around the connectors. 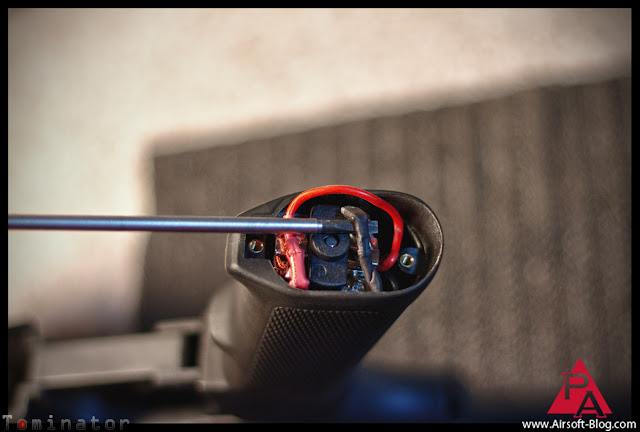 For this next feat, you're really going to need a long Phillips Head screwdriver to remove the four screws that secure the M4 grip to the gearbox. 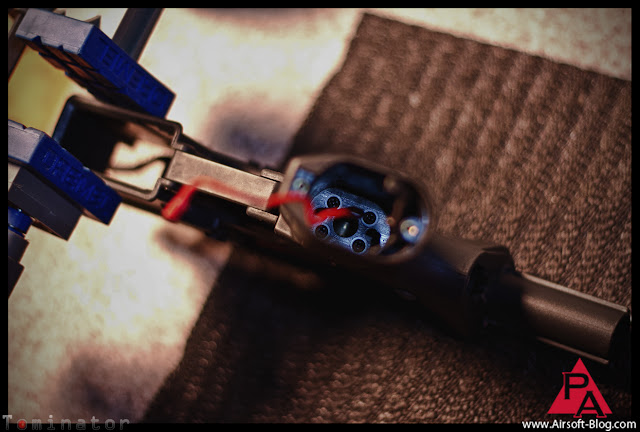 Once you remove those four screws, you can slide the M4 pistol grip off of the lower receiver. 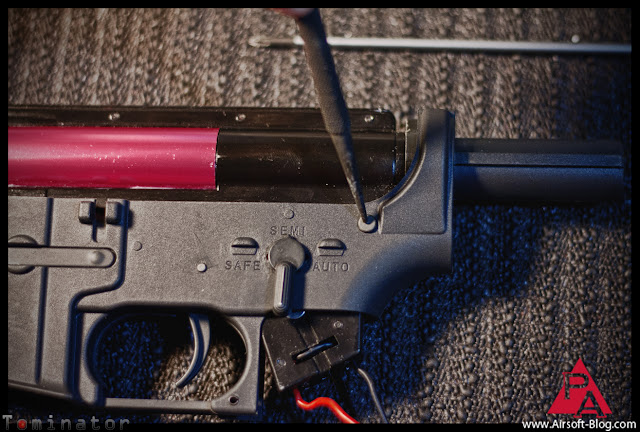 Punch out the body pin here, as seen above.

Then, as I did, you may have to flip the lower receiver over to punch out the trigger pin. 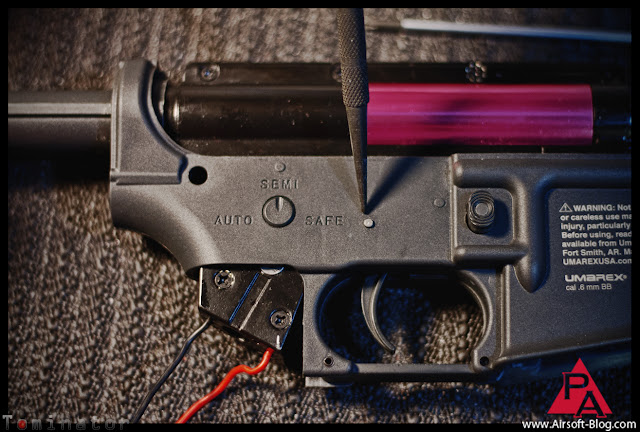 This next part is my least favorite part of working on Airsoft M4 rifles: Removing the mag catch. I don't really know if there is a better technique out there, but the way I do it is to use a punch or another small tool to press the mag release button into the lower receiver so that the mag catch piece on the other side has a chance to clear the magwell and allow me to unscrew it. 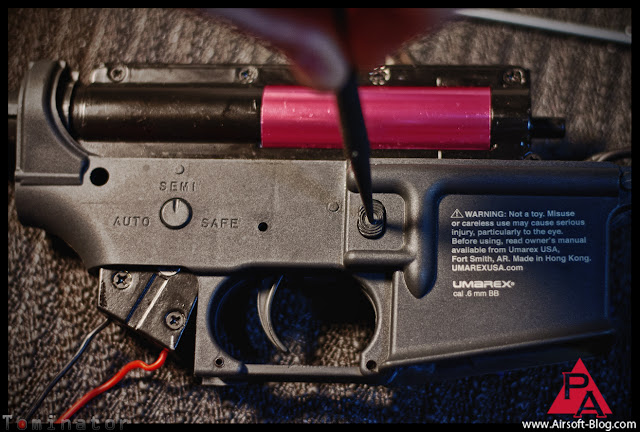 Here's another shot showing my full technique, where I set the gearbox, with the mag release button being the point of contact, on top of the punch to depress the button and raise the mag catch arm out far enough to unscrew it from the lower receiever. 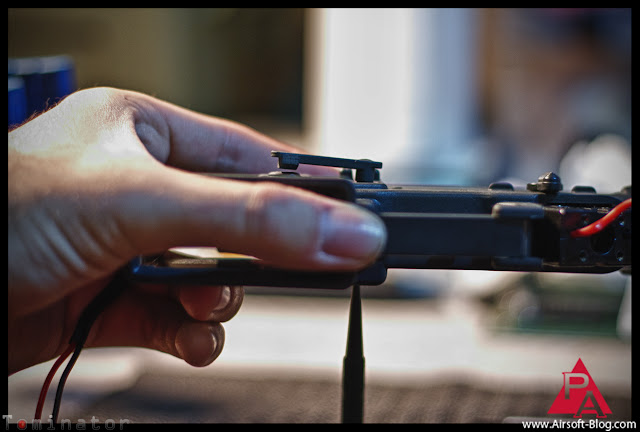 If you do it right, in many guns you can push the button and then wiggle it around a little bit to get it to sit just inside the magwell while you unscrew the mag catch. 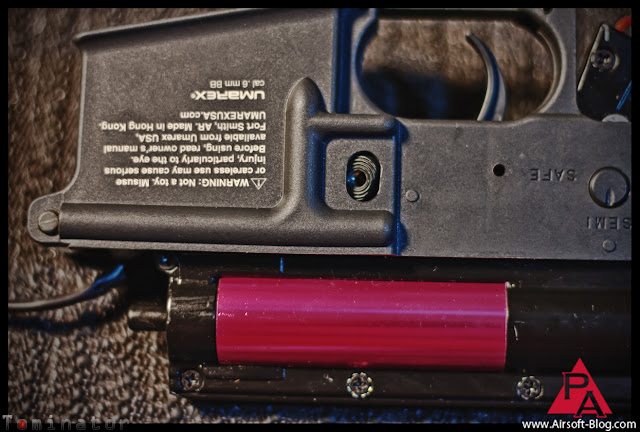 Then there's of the last few steps before you can free the gearbox from its harness.

Once you have completed all the steps I listed out above, in order to get the gearbox out of the shell, you'll need to make sure that grey piece that I'm pointing to in the picture on the left is seated all the way forward, towards the gearbox. If you can't quite get it to be seated forward, you can use a small screw driver or other tiny device by sticking that screwdriver through a small hole in the back of the receiver that dark little hole (see photo on the right). 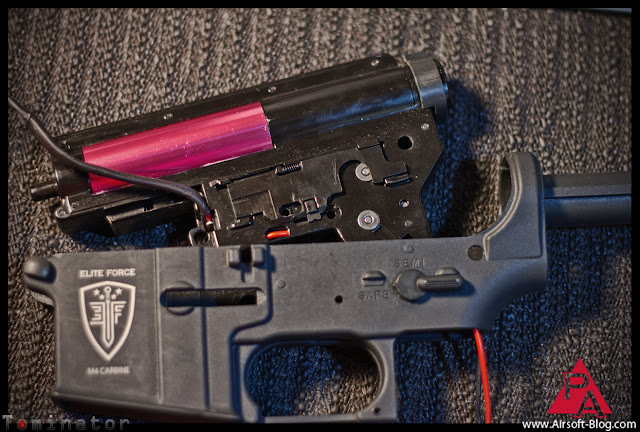 The Elite Force M4A1 AEG gearbox is now detached from the lower receiver. I will stop here, but will take you further at a later time. From here, you can swap out springs, or open up the gearbox to do repairs and maintenance on your gun's internals.