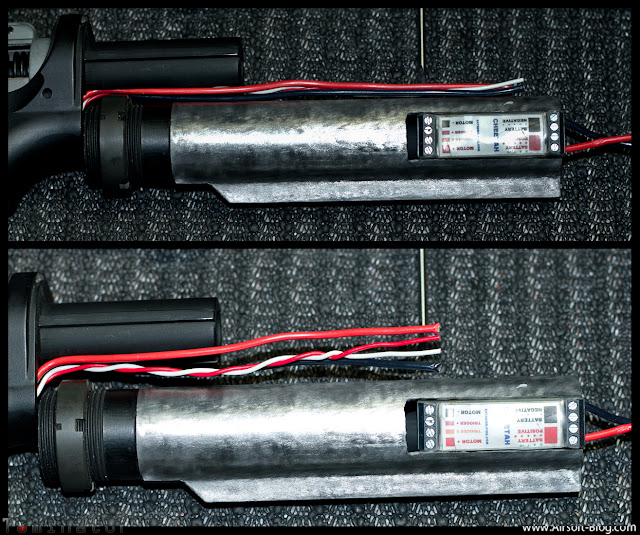 This is Part II of my Airsoft MOSFET Custom Installation Guide for an M4 AEG.  In this particular case, I'm working on an Elite Force HK416 CQB AEG, but this guide is good for pretty much any standard M4 AEG that uses a buffer tube.

I left off my MOSFET Custom Installation Guide - Part I once I had pretty much covered the process of rewiring for the motor & grip.  So now, we will take more of a look at the back-end of the gun, which is where things really get fun.

Check out Part II after the jump...

You can see here that I've taken the grip off again and seated the gearbox back inside the lower receiver.  Luckily, as you can see, there is a wire channel already pre-molded into the bottom of the post that the buffer tube is secured with.  It was actually a perfect fit, just large enough for me to channel all four wires in without having to modify it's structure for a better fit. 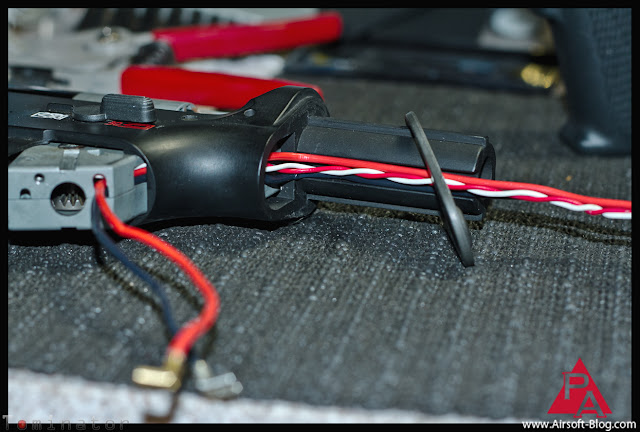 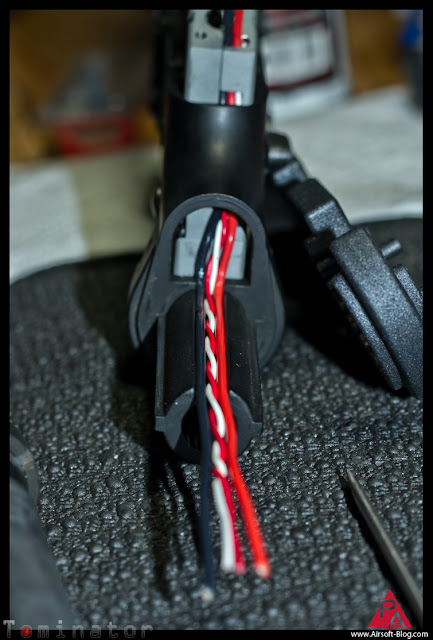 You will also notice that for the small gauge trigger wire in the center, I have twisted the two wires together.  This is to prevent electro-magnetic interference or something fancy like that between the two wires.

This is an area that I really just leave to trusting the experts on, but it's a technique recommended by Terry Fritz, who is the electrical genius behind the Extreme Fire MOSFET units that I use in my guns.  He sent me various links to actual scientific websites, discussing why this is important.  I read about four words, which were multi-syllabic and cryptic to me, so I just decided to take his word for it.  I'd do the same twisting technique on the larger wires, but I just don't have the space required in this gun for that because of this darn buffer tube.

So the next thing to do, as I've illustrated above, is to cut all four wires to terminate at the exact same point, so we can then attach the MOSFET unit.  The top photo is the before shot and the bottom is the after.  You can see that I set up the buffer tube and MOSFET inside the tube as if they were attached to the rifle to get an accurate estimation about what length to choose.

The ends of each wire needs to be stripped, and I advise only stripping off the wire jacket so that there is enough of the bare wire to be inserted all the way into its screw clamp hole on the MOSFET, but the jacket terminates as close to the outside of the opening as possible.  It doesn't have to be super precise or exact, just close enough to prevent bare wires or stray bare wire strands from touching each other once everything else is attached and a battery is plugged in.  This is a surefire way to short your system and possibly damage your entire system, including your volatile Li-Po battery, which, as most know, is a one-way ticket to Fire Danger Town. 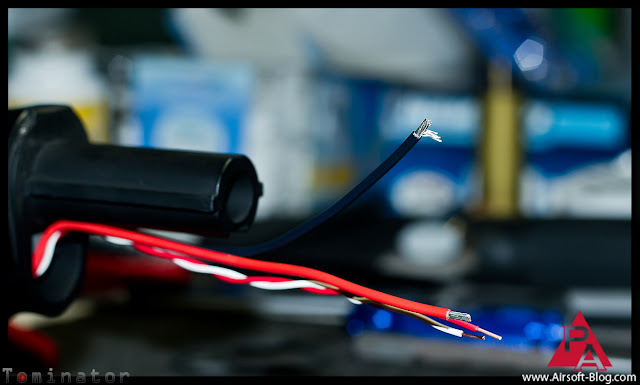 You may also notice in the photo above, that I have peel away several strands of the 14awg wire.  This is actually another technique advised to me by Terry because technically, 14awg wire is too thick to fit inside the terminals of his Cheetah MOSFET units.  He informed me that the loss in signal flow is minimal.  But don't just leave the strands peeled back like that.  You will need to cut them off, as I have done in the image below. 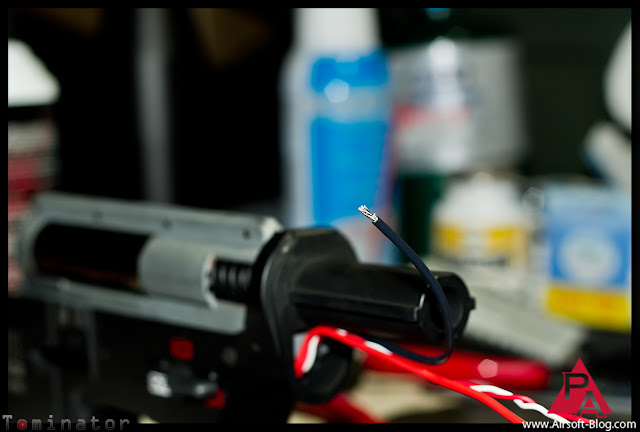 A really helpful tool for this process is a bench vice.  I don't recommend the Dremel-brand vice though.  Too many plastic parts.  It was a gift and has been pretty good, but I'm pretty sure I just rendered my useless on this project from over-tightening one of the adjustment bolts on it.  You will really need at least two hands to install these wires effectively into the MOSFET's terminals, especially if you're using the over-sized wires like me.  So the vice will really come in handy to free up a hand. 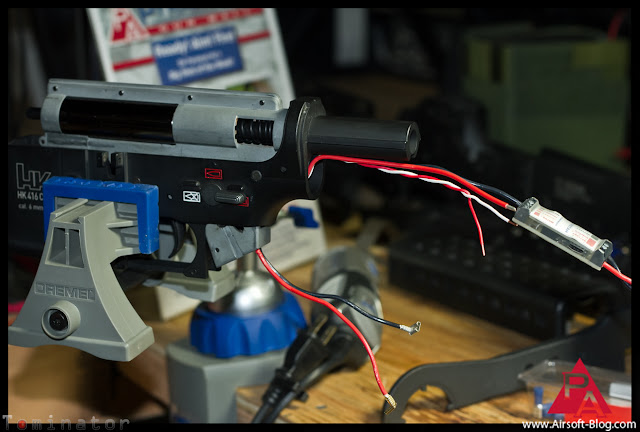 Here, you can see that I've installed the black wire coming from the motor.  If you click on the image to open it in a larger view, you'll sort of be able to see what I was talking about with stripping off only enough of the wire jacket to insert the bare wire into the terminal all the way, minimizing the amount of exposed wire that is outside of that terminal, opening up the potential for a short circuit. 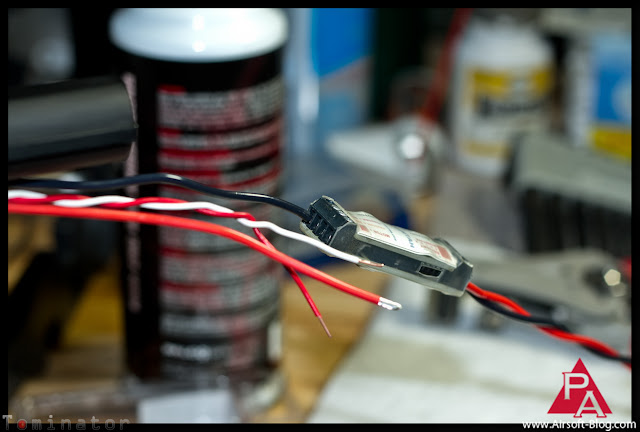 Alright.  So there you have it.  All wires have been fully installed on the MOSFET.  Now, we just need to put the gun back together a bit and start testing to make sure everything is working properly (it never does on the first try for me, though).

I didn't really cover this step, but you can see that I also attached the red & black wires that go to the battery.  Installation is pretty self-explanatory since Extreme Fire has included a guide for us on which wire to insert where.

Of course, I'm actually going to get a bit more complicated with the battery end of the wiring at a later point in this guide to show you a sweet trick to enhance your gaming experience, but for now, we'll keep it as is.

The trickiest part of this installation process, aside from cleanly installing those over-sized wires into those tiny terminals, is figuring out how to get the buffer tube bolted back on to the back of the receiver.  Inside the buffer tube, at the base, is a bolt with a sort of washer piece that has a small chunk missing from it.  It is this washer that prompted me to decide on cutting out a piece of my buffer tube.

Without being able to move the MOSFET out of the way, there was no way I was going to be able to get that washer past it while both pieces were inside of the buffer tube.  There just wasn't enough room.

So, as you can see below, with that window in the buffer tube there, you can know move the MOSFET out of the way enough to get that washer & bolt past it and then screw them in once.  After having actually executed this effectively, I can say that I'll probably cut just a tad bit more out of the short side of the buffer tube to allow the MOSFET to be moved out of the way a bit easier.  I was running the risk of accidentally pulling out some of the wires I had just spent considerable time installing and wouldn't not have been a happy camper. 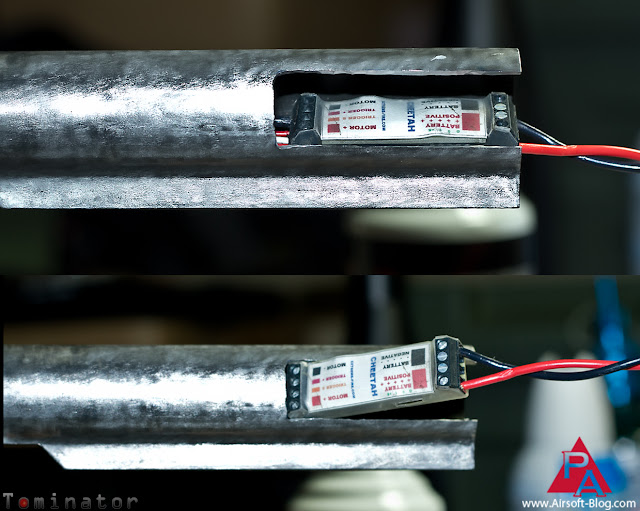 So again, just above, you can see in the bottom shot how I moved the MOSFET out of the way from the side view.  And below, I've taken the same shot, but this time from the back so that you can see the bolt and the washer piece just beyond the MOSFET now, inside the buffer tube. 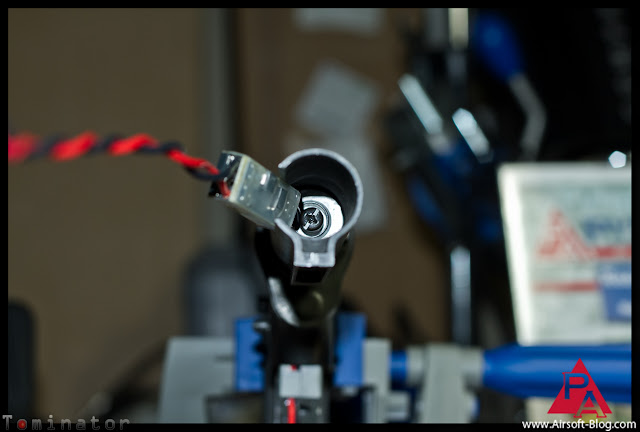 Once you've secured your buffer tube back onto the receiver, you can start assembling the rest of the gun.  This is, of course, assuming that you've tested the gearbox with a battery attached by waiting for the MOSFET to go through its start-up process and then pull the trigger a few times in both semi- and full-auto firing modes to be sure that everything inside the gearbox is working properly and that you've correctly installed and assembled it.  This can be a tedious process of trial and error if you get the system back together to this point, only to find out that your gearbox keeps locking up, like mine is currently doing.  But once you get it right, it's unlikely that you'll have to deal with it again for a long time.  That is the beauty of MOSFETs.  They MAKE you get it just right.  Another reason why you need to know HOW to get it just right, otherwise your system will never work. 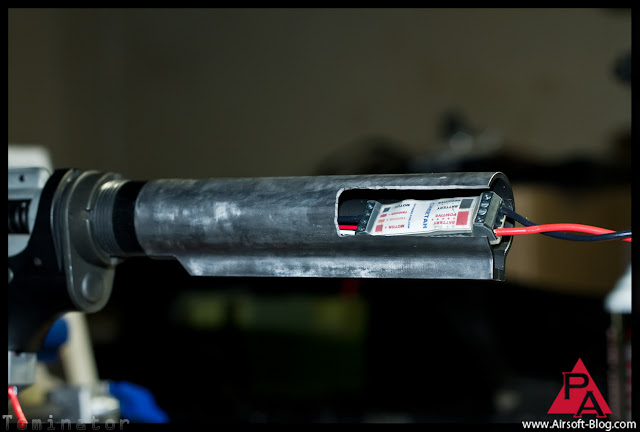 In the future, if I were to do this buffer tube modification again on another rifle, I'd cut out a the MOSFET slot from the top of the buffer tube, rather than on the side, simply because of the stiffness in the wiring that I use, which causes the MOSFET unit to want to lay at rest, facing up, towards the top of the tube.  It then requires you to have to twist the unit to be able to examine or access the screw terminals while installed inside the tube, which creates the risk of pulling one of the wires loose from the terminal, which is a really annoying situation.  But that's just the way I'd do it.  I'm definitely not the most efficient when it comes to solving problems, but I DO solve them.  We're not quite done yet with this MOSFET talk, but we are, at least, done for today.  I will be back with a guide on how I go through the annoying process of diagnosing and resolving gearbox issues that can arise from not assembling it correctly.

If you have found this guide to be very helpful and/or interesting, please share it on your Facebook page or on your favorite Airsoft forum in case there are others that might find some benefit in it as well.  Not only would I appreciate it, but I'm sure others that you share it with might as well.