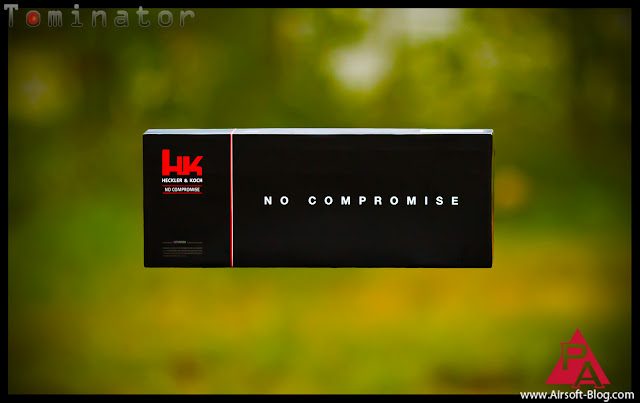 When I first set eyes on the Umarex H&K MP5 A5 Tac Electric Blowback Rifle (EBBR) in person a month or two ago, I realized a month or two ago that I've never really dealt with an MP5 on the Pyramyd Airsoft Blog here. This one was so visually and physically impressive, that I figured I would check it out, in case any of you wonderful readers out there were in the market for a high quality MP5. 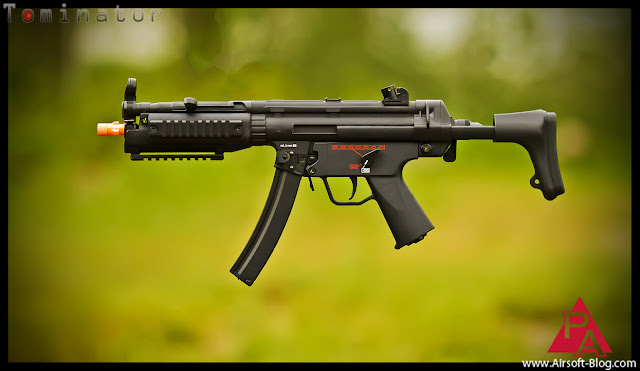 So before I get too deep into the features of the H&K MP5 A5 Tac EBBR, I'd like to take a moment to talk about the actual manufacturer that Umarex partnered with on this one. Top Tech is a relatively little known brand, at least here in the states. It does not get as much time as I think it deserves in the spotlight as its more affordable counterpart, Guay Guay, or best known as G&G. Top Tech is G&G's high end line of airsoft guns and nothing short of impressive. I recall my first encounter with the Top Tech product line at Shot Show 2011. I was at the G&G booth and picked up one of the rifles they had on their wall, thinking it was just a standard G&G M4, but this one had significantly more weight to it, with a much more solid build than I was expecting from a regular G&G rifle. When I asked their staff about it, they informed me that it was a Top Tech blowback M4. Boom. First impression: mind blown. It was really nice, as were the rest of the guns in the Top Tech line. So this MP5 being a Top Tech as well comes as no surprise. 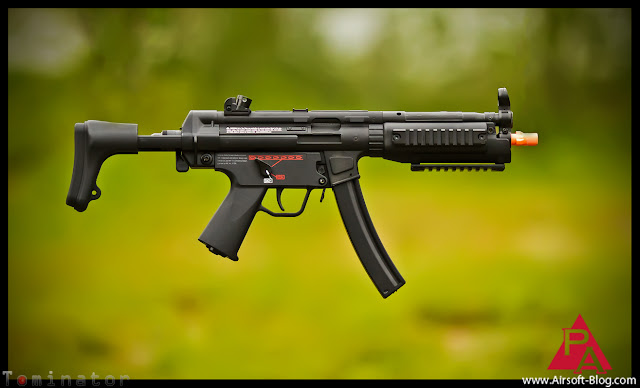 Enough jibber jabber. Check out the features of the Umarex H&K MP5 A5 Tac EBBR after the jump... 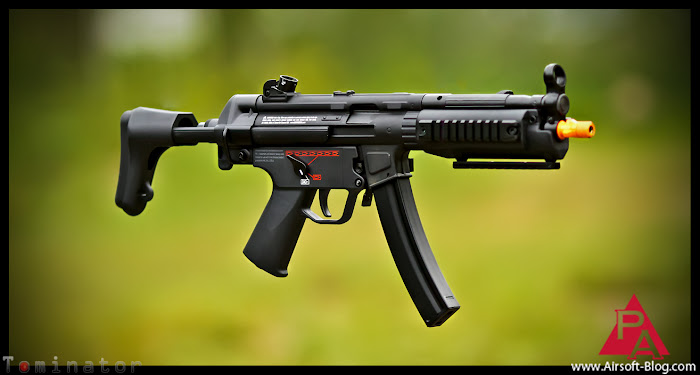 A couple things to point out right off the bat would be on the front end. Number one, you may have noticed this gun as a unique flash hider, or maybe you've noticed that it really isn't a flash hider at all, that it's actually MISSING the flash hider. It actually does come with one, but I don't like the look of it when installed, so I didn't include it and meant to take a photo of it just so you can see what it looks like, but I forgot to do so for this post, so you'll have to wait for the next one. But I WILL show you, so don't get too upset.

Secondly, this MP5 uses neither the signature, cylindrical hand guard, nor that really ugly and annoying triangular hand guard found on other variations of this theme. This MP5 uses a sweet hand guard decked with standard, 20mm Picatinny rails for mounting not only a light and/or a laser, but it's got a third rail on the bottom so that you can mount vertical or angled foregrip on there as well, if you were so inclined. You certainly don't have to, of course, but at least you have the option!!! 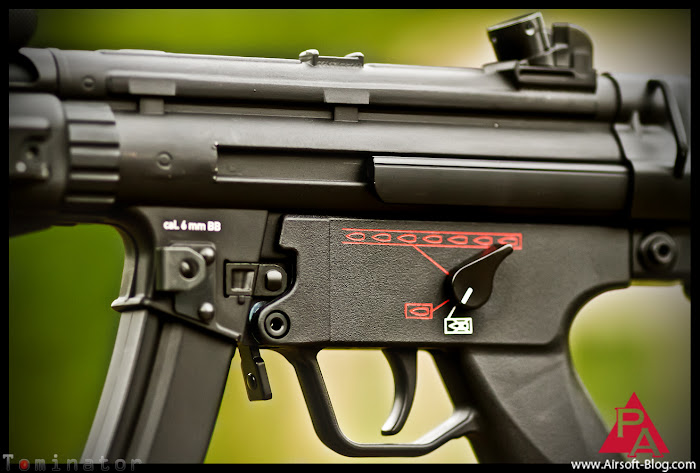 Their externals have the look and feel that are easily on par with one of my favorite of the high end brands, VFC. In fact, if I had to guess the manufacturer of this gun just based on how it looked and felt upon first sight, as well as how nicely it performed, i would have guessed VFC, not Top Tech, because it's that good. Not to say that Top Tech isn't good, it's just far less common and not something I'm using to seeing pretty much anywhere (on the airsoft field or online being advertised or discussed by anyone.

With that being said, let's discuss a bit about the features of this gun.

If you've seen my videos discussing sling mount solutions in the past, you'll know that a pet peeve of mine is when guns do not come with a sling mount attachment point. This means you either have to buy one or make one. Annoying if you literally want to take the gun out of the box for the first time at a game and then realize this. However, as you can see, this is definitely not one of the H&K MP5 A5 Tac EBBR's problems. 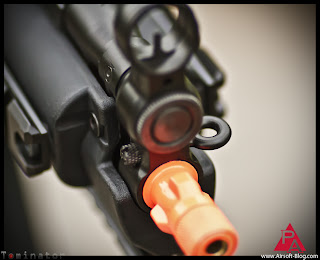 In fact, it not only comes with an attachment point at the back of the reciever for right-handers, but there's one on the other side of the gun for the lefties as well, which is something I know my brother, Todd Harris, will appreciate, being an openly left-handed shooter himself. 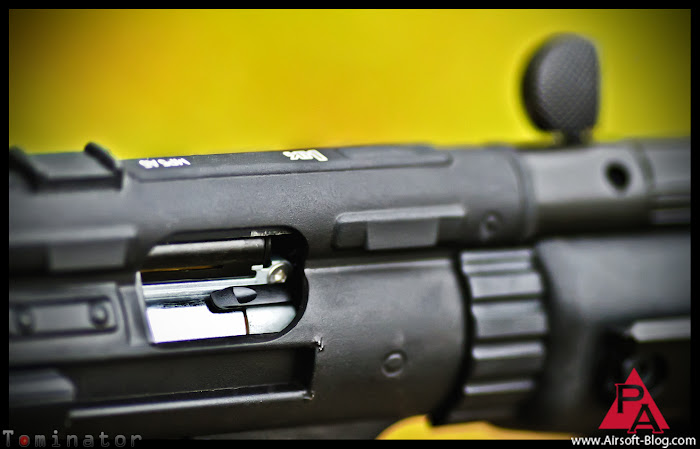 As with most Airsoft MP5's, pulling the metal charging handle back will open the dust cover on the ejection port to reveal the hop-up adjustment lever. Similar to what you might find on an AK47, instead of turning a dial like many guns out there like the M4s, M14s, G3s, etc, you just pull the lever back to increase hop-up on the BBs and push it forward to decrease the hop-up. I might add that dialing in the hop-up for some CQB action last weekend was probably one of the quickest and easiest attempts I've made on a brand new gun in quite some time. I suppose some of it was just good luck, but I literally took a few shots to see where the hop-up was at to begin, made just ONE adjustment with the lever to increase it and BOOM! I flattened out that flight path just like that. And the other great thing is that I never had to readjust the hop-up for the rest of the day.

One of the many wonderful things about H&K guns is that they usually include a toot-load (that's a lot) of ambidextrous features, with the fire selector being one of them.

I will admit though, that I'm not crazy about the design of the H&K fire selector on the MP5 because the rounded bottom of the switch sticks out too far (for me, anyway) and gets in the way of my trigger finger, regardless of which hand I'm firing with. Not a big deal, just another one of those pet peeves.

Now, for a bit of trivia:

Who can tell me what that metal, clippy thing is for, located just underneath where it says "cal. 6mm BB"? Post up in the comments section of this blog post with your answer. I can't promise anything, but the first person who gets it right may or may not receive a small prize. 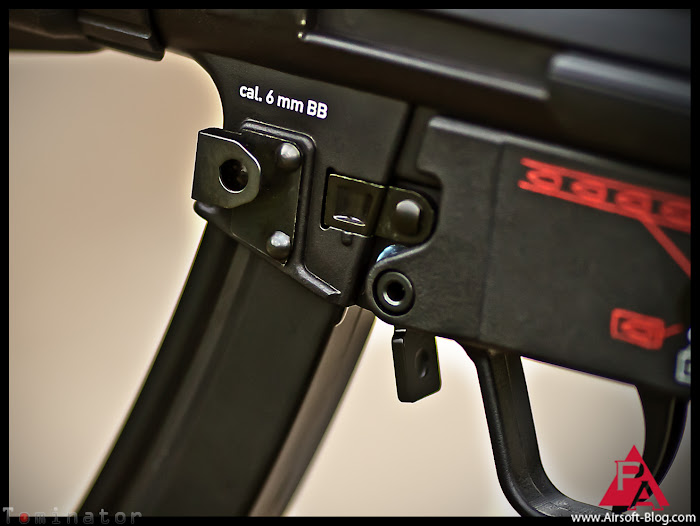 Here below, I have extended the collapsing stock out to about its 5th of 6 positions for no particular reason. However, I did want to point out that the butt of the stock is comprised of a nice, high-quality rubber material, along with a ABS/Polymer base that attaches to two sturdy metal guide rods, one on each side of the receiver. 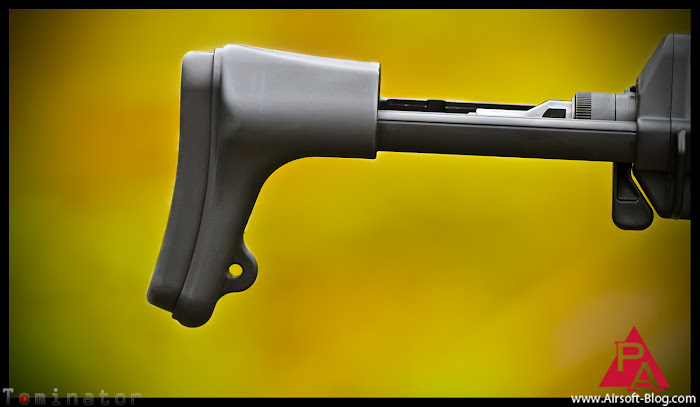 I haven't quite figured out why this elaborate thing is so elaborate. While I haven't researched it or really even asked anyone who might know, to the best of my knowledge, all this thing really does is pretty much create a stopping point from the stock when you collapse it all the way down. It just seems like they went to a lot of trouble and detail to make that thing look like it does something a lot more complex. Of course, it could also be something that is functional on the real steel MP5s that Top Tech simply replicated for aesthetic purposes on the Airsoft side. I don't know. Feel free to enlighten me in the comments below if you're aware of another purpose for this thing. 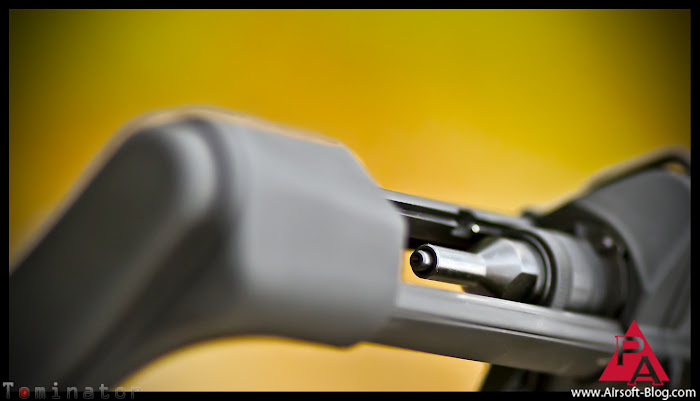 So that's pretty much it (for now). I just wanted to give you an overview of this gorgeous weapon before we get to the nitty gritty of how well it performs (SPOILER ALERT: it does quite well in a hostile environment). I will the performance data for you shortly. Sit tight.


AIRSOFT JOB OPPORTUNITY ALERT: Pyramyd Air is looking for enthusiastic individuals who have a good knowledge of Airsoft products to help them assist their customers while shopping at Pyramyd Air. You'll get paid to talk about Airsoft stuff AND you can do it from the comforts of your own home! Click the following link to register with Needle and get all the details.

If you're done browsing here on the Pyramyd Airsoft Blog, would you mind sharing this blog with friends on Facebook? Perhaps even on your favorite Airsoft forum? Speaking of Facebook, check out our new Facebook page for Pyramyd Airsoft and get in on a chance EVERY WEEK to WIN FIFTY BUCKS ($50) or check out our Pyramyd Airsoft YouTube Channel for a ton of great Airsoft video reviews, unboxing videos and actual Airsoft gun performance tests.