Accessorizing the KWA LM4 PTR (Gas Blowback Rifle)
Check out a bunch of KWA LM4 photos after the jump... 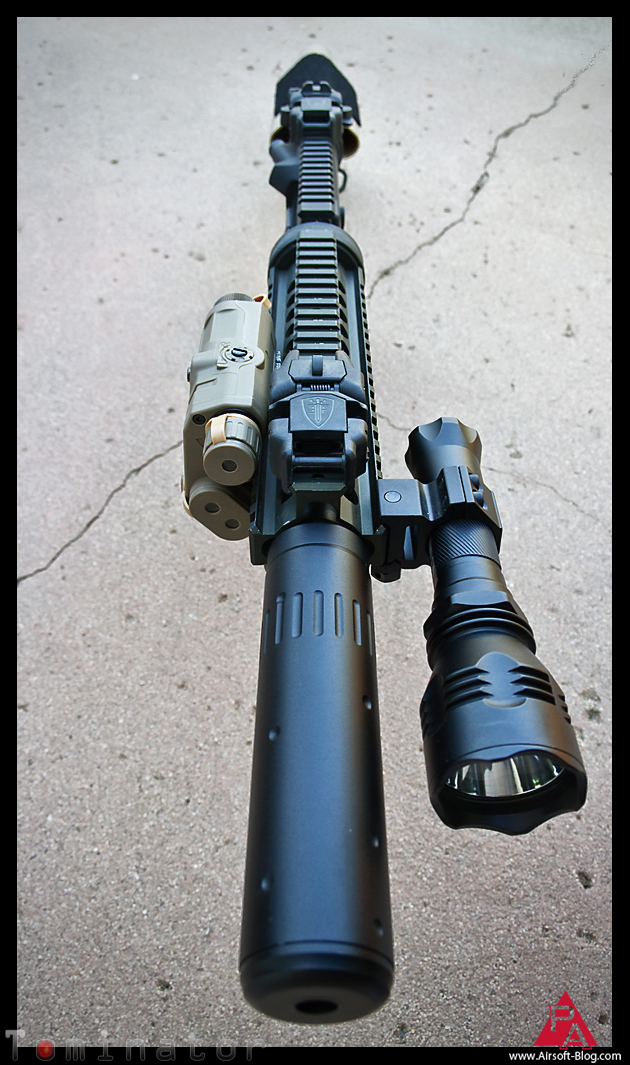 It was asked on YouTube that I do a video explaining all the things that I added to my KWA LM4 GBBR in terms of Airsoft accessories, but since my computer has taken a turn for the worse and doesn't process my video edits in a timely fashion at the moment, we shall have to endure a photos-only explanation for the time being. 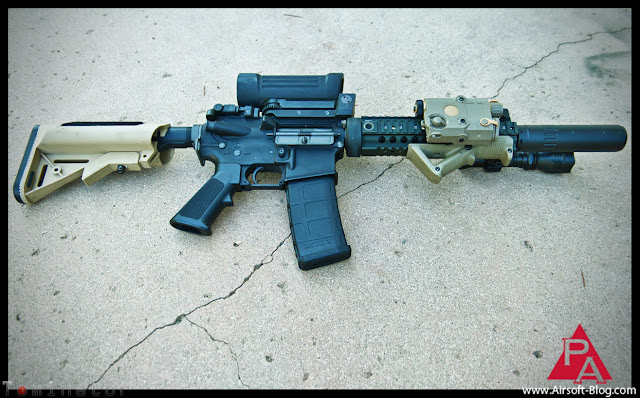 As you can see in the image below, I've added a Navy SEAL-style PEQ Laser box, which is functional, as well as the Elite Force Flip-Up Sights, the Voodoo Tactical Mamba Tac Light.  All of which are attached to a replica Larue 9.0" RIS in FDE. 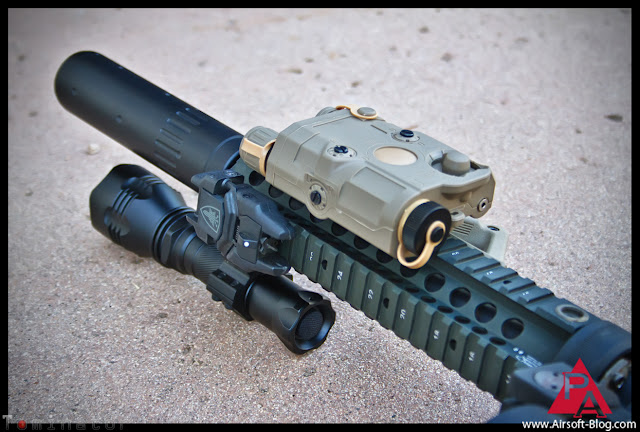 Showin' off her naughty side.  I outfitted my LM4 with an old Classic Army crane stock that I had sitting around.  I then applied some adhesive velcro (loop side) to the top of it because I had seen somewhere that cool people did that sort of thing.
And I desperately want to be cool.  Hence the adhesive velcro. 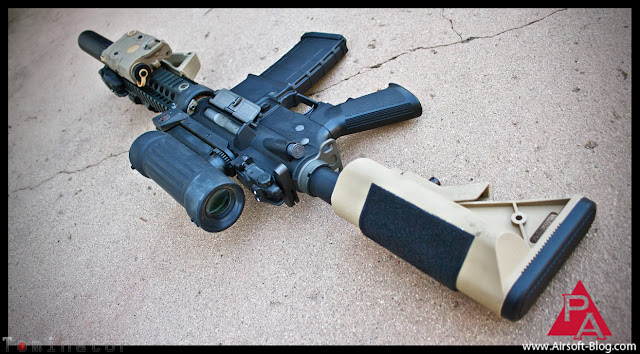 Unless you're hyper-focused on other parts of my KWA LM4 here, you've probably noticed I've got a somewhat unconventional optic sight on the rifle.  And not just any ol' optical sight.  A replica Elcan 4x Optical Sight by Bravo.  If you have seen the real or replicated version of this sight anywhere else, it's likely that it was mounted on some sort of American-based machine gun.  However, since this is Airsoft, I am going to do what I want.  I thought it looked kinda cool, plus I actually really like using that particular optic. 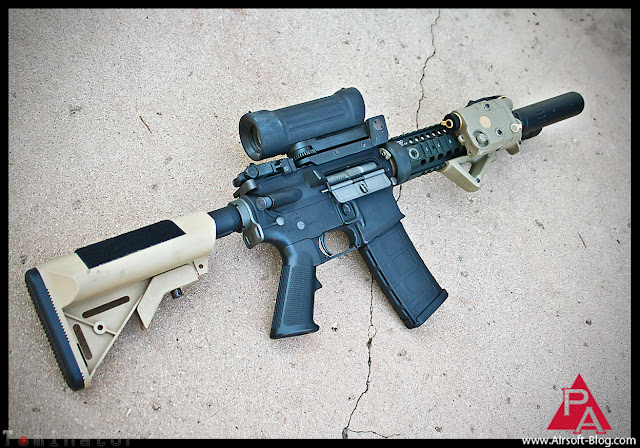 The eye-relief on it (and all other Bravo optics I've peered through), is horrible.  You pretty much have to put your eye right up on that glass to get the full sight picture.  However, I've gotten used to it and now don't really even notice.  However, the glass is actually pretty clear (provided it's not coated with dust & debris) and I like the magnification and style of reticle. 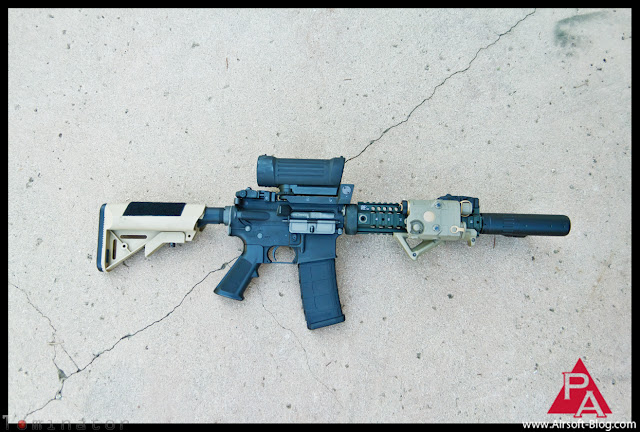 Also visible is the DBoys AAC SCAR-style mock suppressor and Magpul Angled Foregrip (AFG) attached to the front end of the rifle. 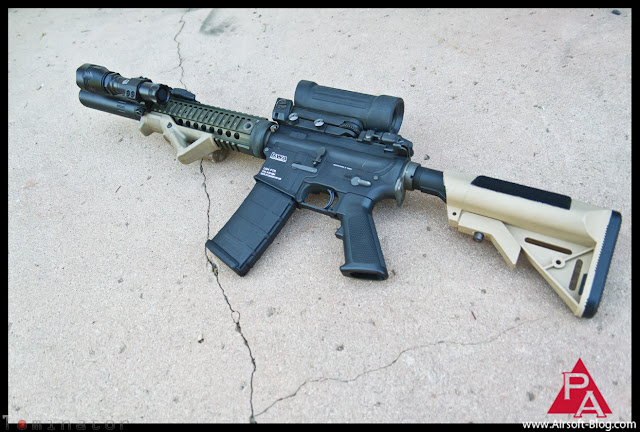 You might be wondering about where I happened to get a 9" outer barrel for the LM4 so that the mock suppressor can sit flush against the front of the rail system, even though I'm pretty sure there isn't one currently available as an aftermarket item.  Well, if you didn't already know this, KWA has graciously made their standard-length 14.5" outer barrel for the LM4 convertible to the 9" version by simply making it in two pieces with counterclockwise threading.  Of course, I forgot to snap a shot of exactly what I'm talking about, but basically, the front piece of the barrel can unscrew right at the point where my rail system terminates.  If you have a longer rail and still want to run a mock suppressor on this rifle, you can also simply leave the outer barrel in its standard-length configuration and simply swap out the flash hider with a mock suppressor as well.  The best of both worlds! 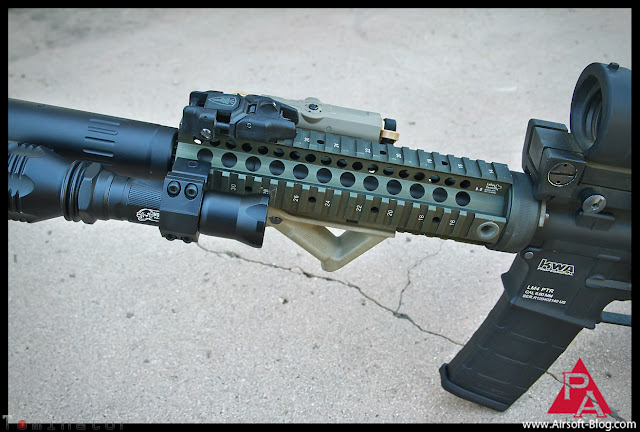 I highly recommend using a tac light if you play on any field where you might have to enter a room or building from outside, and especially if you are playing in an indoor, cqb environment where the facility might run a few games with all the lights switched off.  The second part of that should be fairly obvious, but one thing I plan to cover in a future blog is the benefits of having a torch mounted to your rifle when you're playing on an indoor/outdoor field, like a MOUT during the day time. 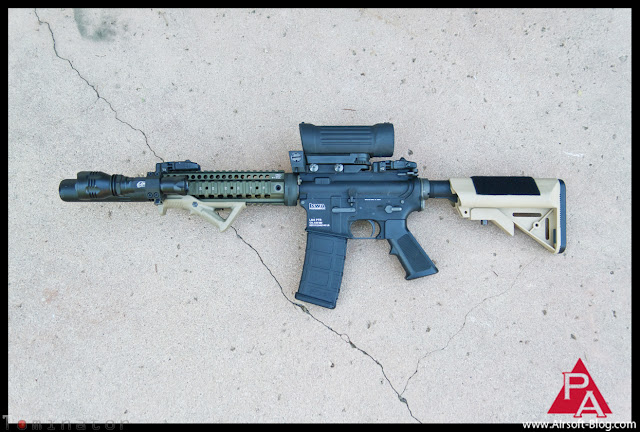 For now, just trust me when I say that a tac light can come in real handy during certain situations on those types of fields. 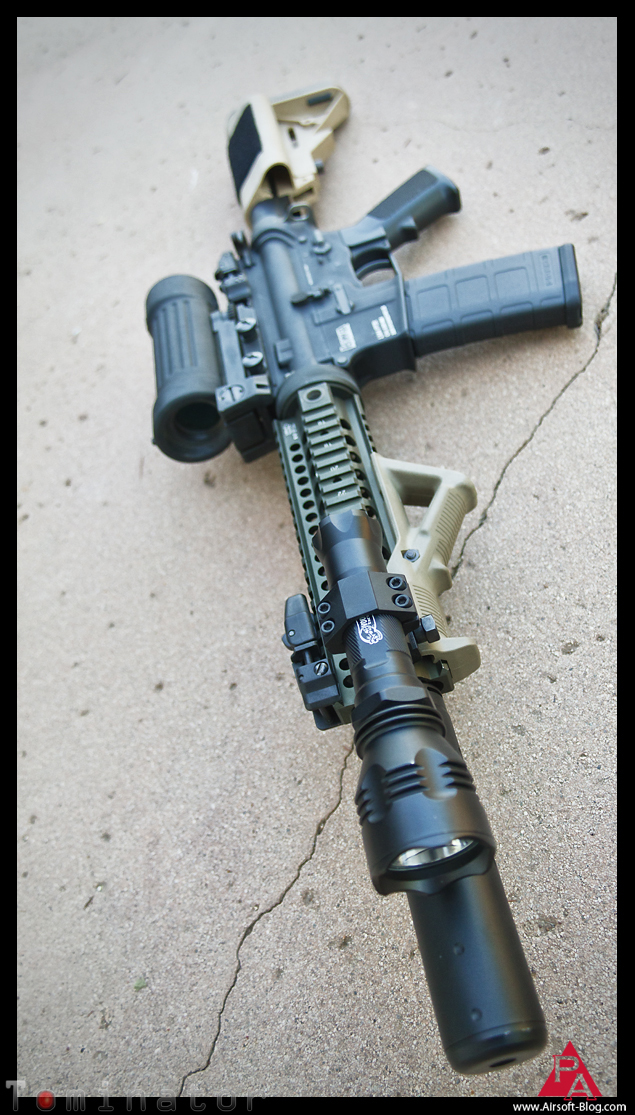 I'm really liking this new Voodoo Tactical Mamba torch I recently picked up.  It packs a whopping 230 lumens of brightness, which gives you a very long range of illumination at night time.  I've tested it outside around midnight on my street.  My house is at one end and the house on the other end is about 100 yards or so.  I can light up their front yard completely from my end of the street.  Absolutely nuts.  Plus, this model comes with a weapon mounting kit that includes a mount and remote, momentary pressure pad.  I don't like the mount, however, because it's designed to attach to the rifle using the outer barrel, rather than attach via Picatinny rail.  So I got a little creative based on available resources and just used a low-profile, 1" diameter scope ring mount.  Perfect fit.

While the particular mount that I used may put the light just a tad too far out for some comfort levels, I don't mind it at all thus far.  Plus, with the front-end bezel being fairly large in diameter, you will need a mounted that seems like it sticks out a bit farther than you might think looks necessary. 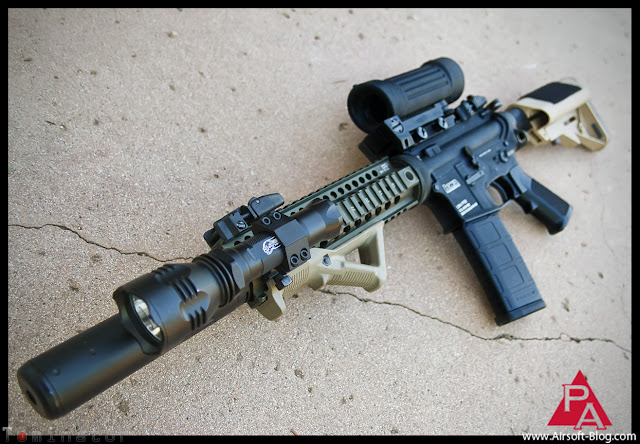 I haven't had a chance to situate the pressure pads for both the Voodoo torch and the PEQ box laser, so I didn't bother including them in the photos.  But I will be needing to do that prior to heading out to the field again, if I want to be able to use each tool more effectively.

Last but not least, I finally picked up an extra mag for this beast (I have only been playing with the one that came with the rifle up until this point).  Naturally, I went for the tacti-cool Magpul PTS PMAG for the KWA LM4, which, of course, is available at Pyramyd Air. 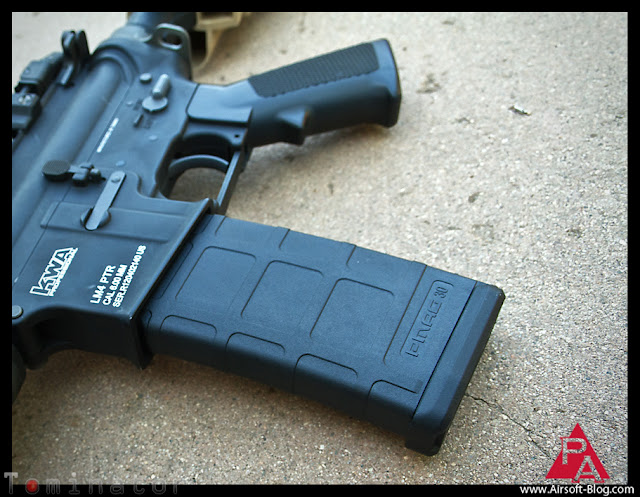 Believe it or not, there are actually a few more things that I plan to do to my LM4 to trick it out externally, and I will, of course, share those updates with you here on the Pyramyd Airsoft Blog when I've completed them, but that is the majority of external features that I've added thus far.

And in case you're wondering how well this thing works, here are some gameplay action videos for your viewing pleasure.