10 Steps to Starting An Airsoft Team (A Freakin' Legit Team, No Less)

Alright.  So I've got a bit of a special blog (perhaps even a small series) regarding how to start an Airsoft team.  And not just any Airsoft team, but one that is awesome.

What makes me the authority on starting Airsoft teams?  Oh, I don't know really.  Why not worry about that after you have read what I have to say and then decide whether I know what I'm talking about or not.

Check out my 10-Step program on how to start an Airsoft team after the jump...

Step 1 - Make sure that passion for and commitment to this hobby and to your future team exists.  Don't be a quitter.

Step 2 - Recruit the best players in the area.  Make sure they have accurate guns, awesome kits (tactical gear), sound tactical knowledge, excellent physical fitness and, if nothing else, it wouldn't hurt if they all rocked a beard.  If your friends want to join, make sure they fit the bill here and won't become an anchor to your high-speed unit.  Otherwise, tell them to take a hike cuz they're just too much baggage. 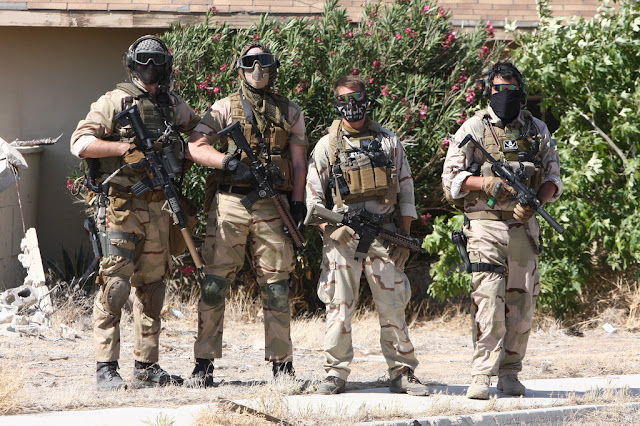 In the event your area is deficient in quantity of the type of players I described above, then you may as well just recruit your unfit friends and anyone else who is passionate about Airsoft and wants to commit to greatness.  You can all develop the necessary skills to win with a little bit of work and determination at a later time.  The number of operators you recruit is up to you and how much you can effectively manage.  A good solid core to start with would be 4-5 guys.  That is usually plenty to do serious damage to the OPFOR if you know what you're doing.


Step 3 - Once you've got a group of committed individuals together, start showing up to games together.  Try to make at least 1-2 games a month as an entire team.  Focus on getting the group used to working with each other and sticking together as you move throughout the battlefield.  Discourage that "Lone Wolf" B.S., as it's a good way for the enemy to win via the "divide & conquer method."  Strength in numbers always wins (unless you're all terrible players).  Especially if those numbers are each covering their sector and working together cohesively.  Encourage verbal communication wherever appropriate.  Having everyone get a set of comms (2-way radio) can be an extremely effective way of coordinating with each other from any position on the battlefield and really take your winning to the next level.

Step 4 - Come up with an awesome, yet appropriate name for your airsoft team.  If possible, have someone savvy in graphic design come up with an epic symbol to represent your team.  A good rule of thumb is to avoid using actual military branches or special ops units in your name.  People do it, but it's kind of inappropriate unless your team consists of actual operators from that branch or group.  Never lie about serving in the military and if you have served in the military, don't embellish your record.  What you actually did for our country is more than enough to be proud of.  Even if you were just a chef in the mess hall.  I don't care.  You're awesome.

You don't have to think of a name right away.  Take time to assess the strengths and virtues of your team and incorporate that into your name so that if someone were to ever call you out on your name, you have the ability to back it up.  It's kinda like getting a tattoo that says, "I'm a super toughguy," when in reality, you're a terrible fighter and absolutely abhor even the slightest discomfort.

Step 5 - Call your hits.  Every time.  And make sure everyone else on your team knows that they are expected to do the same.  If you need any further clarification why this is important, please lose interest in Airsoft immediately.  Go play paintball or Words With Friends or something else that is not Airsoft.  Let your team know that honor and integrity on the field are non-negotiable items which everyone on your team must have.  It wouldn't hurt to encourage those ideals off the field as well (e.g. when interacting with others on Airsoft forums or on other social media channels like Facebook).  Lead by example here.
Step 6 - Supplement your game-play experiences with training on the side.  In my humble opinion, there are certain skills that can only be developed in a live fire, in-game environment, but there's a lot that can be developed outside of actual games or MilSim Ops.  If there aren't any games going on for a bit and everyone has a hall pass, get your boys (or girls) together and run some drills.  What kind of drills?  Oh, I don't know.  Maybe the kind that make you shoot better.  Or the kind that make you work better as one unit instead of 5-6 individuals.  I'm an Airsoft blogger, not a tactics instructor.  If you don't even know where to start when it comes to seeking instruction, go check out MilSim Mechanix on Facebook.  They'll get you pointed in the right direction.  Or just watch Art of the Tactical Carbine.

Step 7 - If you really have a hunger to be the best, I suggest mixing in a bit of P.T. (physical training or fitness) to make it harder for the enemy to keep up their resistance to your persistent volley of gunfire and awesome tactical movement.  Notice how all those SF & SEAL guys you stare at in internet pics instead of working during the day can run like 50 miles with a 60-pound ruck (27.2kg for my metric friends) without boots on and do like a hundred pull-ups with a super heavy, giant tire chained to their waist?  Believe it or not, that is NOT a coincidence!!!  You don't get to call yourself "high-speed" if you can't actually move at a high speed for a prolonged period of time.  If you're like me and fail miserably in the P.T. department, at least watch your diet.  Cut out the soda.  Cut out the fast food.  Your wallet and your waistline will benefit.  Which leads to more money you'll have to spend on Airsoft goodies AND you'll look good in your kit, instead of playing to the stereotype of being a fat, socially awkward gamer nerd who just camps at the back of the field all day.

Step 8 - Speaking of money, assuming you are truly committed to being the best, everyone needs to get a job.  One that does not require you to work on Saturdays or Sundays for hopefully obvious reasons (that's when the pickup games and milsim ops occur, dummy).  This is America.  This country was founded under extreme oppression and tyranny from the British.  It was then built upon by the blood, sweat & tears of many hard-working Americans who have come before you.  It was not built by the excuse of, "Oh, poo.  The economy stinks because of Obama, George W. or Justin Bieber."  The economy isn't as bad anymore anyway.  Jobs are out there.  It is simply a matter of how badly you want to win.  Put your brain to work so that someone else will want to put you to work.

Once jobs are acquired, practice fiscal responsibility and save your pennies.  Purchase some good looking, high quality matching threads for your team's uniform.  I personally recommend 5.11 Tactical Series or Voodoo Tactical.  As far as color or camo, let your ultimate goal or vision for the team guide you here.  If you want to be taken seriously, do NOT show up in matching neon blue, pink or otherwise non-subdued-color digicam.  That would be stupid.  As far as tactical gear goes, let each guy choose his own kit, as that needs to be functional for the individual.  Just make sure everyone has the essentials like a vest or a chest rig, with several rifle & pistol mag pouches, maybe a dump pouch for empty mags and a hydration pouch.  Showing up to the field, looking squared away in matching uniforms and badass kits automatically brings Psychological Operations or "PsyOps" into the equation.  EVERYONE, and I mean EVERYONE is going to be looking at you with envy, admiration and, most importantly, fear.  You've already won half the battle before it even got started just by looking 2lgt_2qt (too legit to quit), as my GWA friends or MC Hammer fans would say.

Step 9 - Don't blow all your cash on sexy tactical nylon because if you don't already have a reliable and accurate rifle, you're just a good-looking team of dudes who have to sit out in the parking lot because your guns don't work.  Invest in some good rifles, and pistols, too.  In case you're new here, check out the links on the right hand side of this blog.  I've got a whole slew of product reviews featuring high quality guns.  In fact, for the most part, I won't even review it unless it's good.  If it's a bad product, I won't review and just send it back.  Life is too short to review crappy guns.  Heck, I just wrote a whole blog about selecting a good airsoft gun, so you may as well start there.

Step 10 - Be ambassadors of the sport, stay humble and continually grow.  Now that you've reached a level of success to where you are both loved and hated (you look good, you shoot well, you operate like a solid unit of operators, etc.), it's time to focus on the future.  Set a good example for other teams to follow.  Especially the younger players who look up to you as role models and who aspire to be on your team someday in the future after they've hit puberty and have the ability to grow a monstrous beard (remember Step 2?).  Be humble in both your wins and your losses.  Even the best teams get their asses handed to them every now & then.  It wouldn't hurt to congratulate the other team in the event they were to beat you fair & square.  Go up to them as a group after the game and shake their hands.  Minimize the butthurt.  Do not let it flow through you like that Star Wars meme says.  That's what losers do.  You can "lose" without being a "loser," if you catch my meaning.  Use your losses as a wake-up call that there is still more room for you & your boys to grow.  Assess the areas of weakness that led to your loss & work to improve upon them.

I'm sure I left out a few details here and there, but I think you can get the gist of what to do at this point.

I have a few more topics pertaining to Airsoft teams that I may share, depending upon the success of this particular blog.  So if you enjoyed it, please share it so that I'll know to post the rest or not.