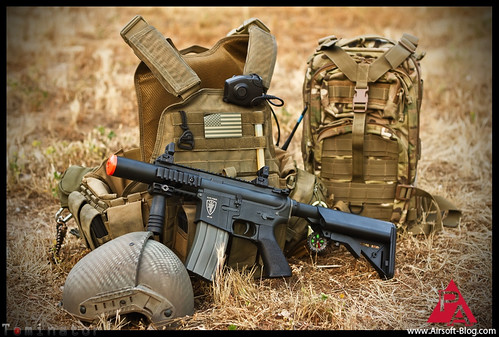 Ah, yes. Today we pay a visit to the Elite Force M4 CQC AEG Rifle. This model is not yet available for sale to the public yet, but Cliff Eisenbarger & Andy Green over at Elite Force were kind enough to give in to my whining and complaining about getting some pre-production samples sent to my grid. 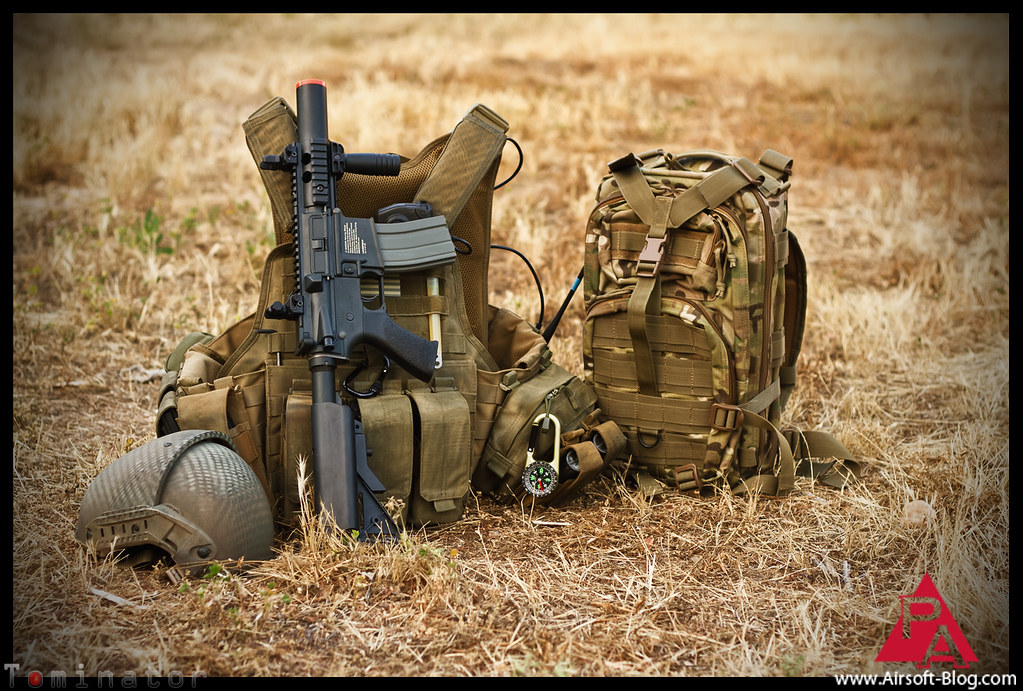 Check out the full review of the Elite Force M4 CQC after the jump...

One thing I really dig about the Elite Force M4 CQC is its flip-up sights. They look good, in my opinion, and are adjustable for windage and elevation. The rear sight has two sights, one for close quarter battle (CQB) and one for longer engagements. Definitely a nice touch. One thing to note about these sites is that to deploy them, you only need to press the button on one side or the other. They are ambidextrous, which is another nice touch. I have yet to confirm whether these will be the final design of the sights or if the final production model will include the new Elite Force MBUS-style flip-up sights. Either way, it's a win for shooters. 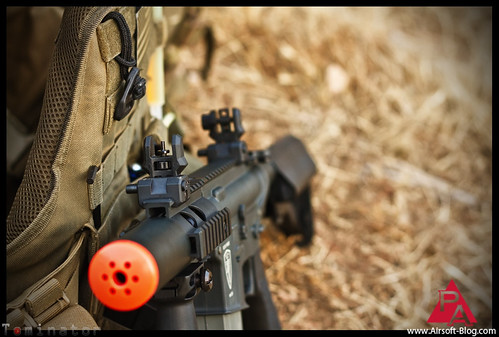 Lowering our focus a bit to the underside of the M4 CQC's Rail Interface System (RIS), you'll note that this Airsoft AEG comes with a stubby vert grip. I love stubby vert grips and I especially love it when they come with the gun. So naturally, I was pleased to discover this little treat. My other complaint about the stubby vert grip is that it's not really a Quick-Detach (QD) unit. To attach or detach from the rifle, you have to unscrew that knob, either by hand or with a medium-ish flathead screwdriver, THEN you have to pull the bolt out in order to slide the grip off of the RIS. When it's all said and done, chances are that you won't run into issues with this unless you need to swap the grip out with another quickly or put it on another rifle. Since we're only talking a difference of maybe 20 seconds or less, I probably wouldn't even list this as a con. I'm just being picky cuz I have that luxury. 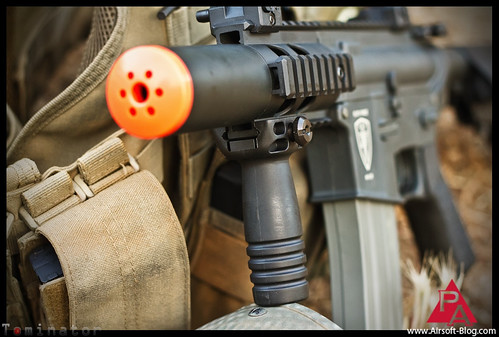 Raising our focus back up a smidge, you can see that this Elite Force stubby M4 has an integrated mock suppressor attached to the end of it. This is not a standard, 14mm threaded suppressor. It is proprietary to this specific rifle and screws on to the end of the front-end of the RIS. It is hollow inside, which helps to keep this gun pretty lightweight, minimizing fatigue, and making it easier to maneuver. I would also point out that while I don't have the specs of the inner barrel handy at the moment (I'm writing this on an airplane inbound to Ohio for the U.S. Airsoft Expo), I can tell you that it does run to the end of the suppressor. Detaching the suppressor would reveal the exposed inner barrel. 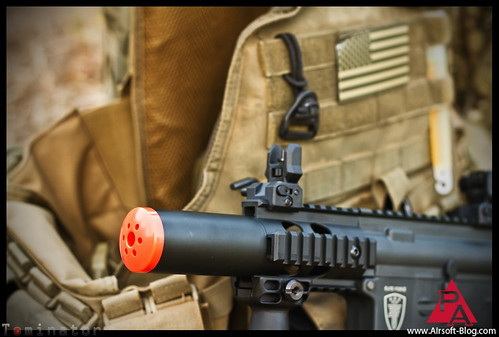 Taking a closer look at the center of the Elite Force M4 CQC's body, I noticed that the hop-up unit appears to have gotten a face-lift. I was unable to get a better photo due to lack of time, but you can faintly see that it features a large dial facing perpendicular to the traditional M4 hop-up designs. The M4 CQC's design resembles the design of a G3-type hop-up more closely, or the Madbull Ultimate 3-in-1 hop-up (in terms of the adjustment dial, not the tracer add-on feature), for those of you that are familiar. 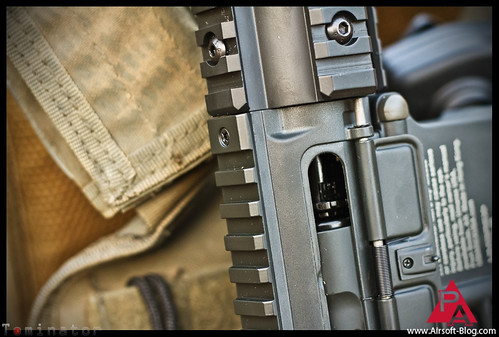 You should also notice in the image above that the Elite Force M4 CQC has a monolithic rail, where there is no real gap between the rail on the upper receiver and the top rail of the handguard or front-end section of the rifle. I haven't had a chance to test whether or not this one is legit or not, but the theory is that you have more flexibility in mounting optics & other accessories on the top of your rifle when you don't have that gap in the two rails like a more standard M4 would have.

As I got further and further through assessing all that the Elite Force M4 CQC brings to the table, I realized that despite being part of their Competition Series rifles, which are more budget friendly, Elite Force really packed a lot of subtle features into this little shorty M4. The grip being a prime example. We all know what the standard M4 grip looks and feels like. Having large gorilla paws, I personally don't find that grip to be all that comfortable. Which is why I was pleased to see that Elite Force went with a larger, stippled grip that also comes on their Gen1 HK416s (they're updating that rifle to include the signature Heckler & Koch 416 grip later this year though). This grip is very comfortable for those of us with the larger hands, but it's not so large that circus carnies & other people with small hands would be inhibited from using it. 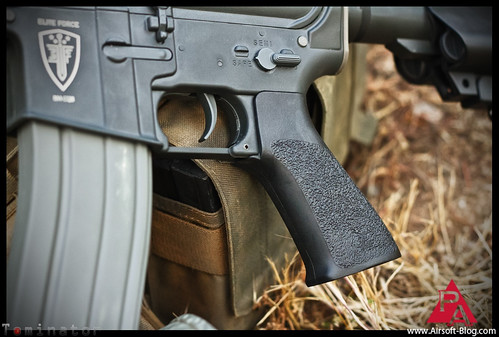 The Elite Force M4 CQC does fire in both semi and full-auto modes. I would also point out that while the charging handle is functional, opening the dust cover and pulling back the fake bolt to reveal the hop-up adjustment dial, the bolt release button is NOT functional, which means that you have to hold the damn charging handle back with one hand, brace the rifle against your body and another object and then adjust the hop-up dial with your other hand. For this reason, I deduct one "Awesome Point" from this rifle and to whoever approved the rifle with that flaw in it. I am sure it was omitted to keep costs low, but quite frankly, I'd rather pay a couple extra bucks for the functional bolt catch or save a couple extra bucks and have a non-functional charging handle. But that's just one measly ol' Airsoft blogger's opinion. I'm not a big deal like CrazyNCman or anything, so I'm pretty sure the manufacturers aren't reading this. 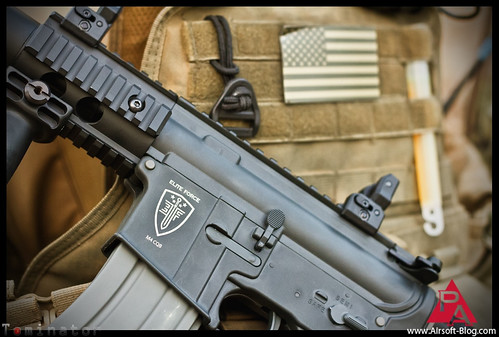 You can see in the image directly below that this rifle has a basic crane stock, which is where you would store your Airsoft battery pack, since this rifle is wired to the rear through the buffer tube. Another fail, which I believe is oddly characteristic of the manufacturer that Elite Force partnered with on this gun (S&T, I believe): They bolt the freakin' rubber buttplate onto the back of the crane stock. WHY, S&T?! Why? This is the same trouble I had initially with the Elite Force M4 Competitions that I've reviewed in the past from the same manufacturer. This leads me to believe that the manufacturer seems to think that removing the entire crane stock to plug or unplug your battery, then trying to slide that crane stock back on, with the battery somehow still connect, is the best route to take. Anyone who's actually tried this will tell you that it's not. The easiest way to plug in your battery to a rear-wired AEG with a crane stock is simply to pop off the buttplate at the back, plug in the battery, situate your battery in one of the crane stock tubes, arrange the wiring to avoid them getting pinched, and then secured the buttplate back on. I will say that this is a resolvable issue, it's just really annoying and confusing as to why S&T does this. The rubber on the buttplate is removable and once removed, you can get the Phillips head bolt that secures the buttplate to the back of the crane stock. Even without the bolt in there, the buttplate still snaps securely into place, with pretty much zero risk of popping off unexpectedly, assuming you've properly snapped it into place. Alright, I will stop ranting about this.  I rant because I care.

Lastly, I thought I might talk about the applications or purpose this stubby M4 could serve for you. 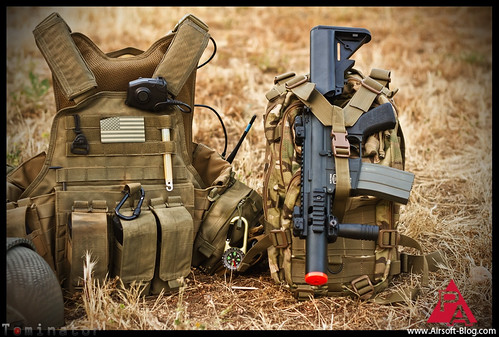 With it's extremely compact size, it's obviously not meant to be a Designated Marksman Rifle (DMR). The Elite Force M4 CQC can, however, be used as a primary in a close quarter battle environment, whether you're at an indoor field or at an outdoor MOUT. It's also compact and lightweight enough that you can strap it to the back of your vest or pack, like I've done with the Voodoo Tactical Level III Assault Pack above & below, and run it as a backup when you're playing outdoor games and running a sniper rifle as your primary. Normally, you would have a spotter with you to handle the close quarter engagements, but if you don't have the luxury of a solid spotter and have to run solo, this gun would make a great backup. I can see it especially shining in a MOUT or otherwise outdoor urban environment. 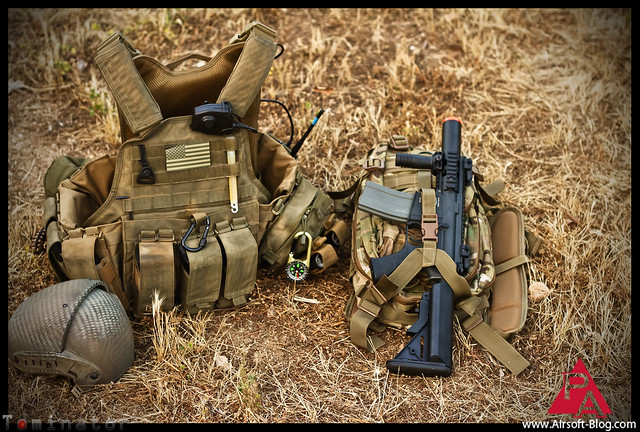 While I will be reviewing the performance of this gun in a separate post, I can tell you in advance that this rifle is crazy accurate and consistent for being such a compact unit. I was actually pretty impressed with just how consistent my BBs were flying. That could also be a testament to the BBs I was using (Elite Force .25g BBs), but the rifle does have an effect as well, for better or worse.

That's all for now. Thanks for sticking it all the way through. This is most certainly going to be a high quality, yet affordable, CQB platform for anyone looking at adding a new option to their arsenal.

If you enjoyed this review, please share a link to it with your homies. I would certainly appreciate it.