Papa Bear & Andy Green sent me one of their Elite Force 1911 A1 Tac CO2 GBB Pistols the other day because I whined & complained that Airsoftology, CrazyNCman & the MilSim Junkie all got one to review and I felt that there was some sort of conspiracy against me.  I also sold one of my very expensive saxophones and used the money to buy a sweet new Canon lens for my DSLR camera.  Since they both arrived in the same week, I figured it was the perfect excuse to snap a few photos using both items. 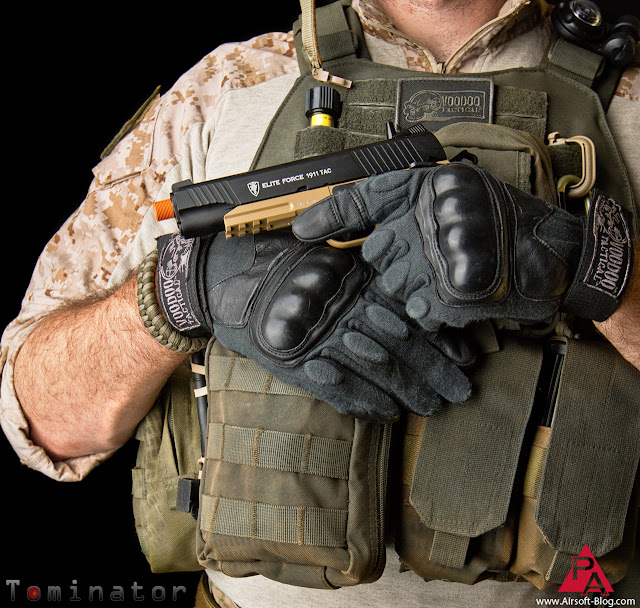 I also figured I'd review the gun as well, since that is why it was sent to me in the first place.

You can check out all the photos and the full review after the jump... 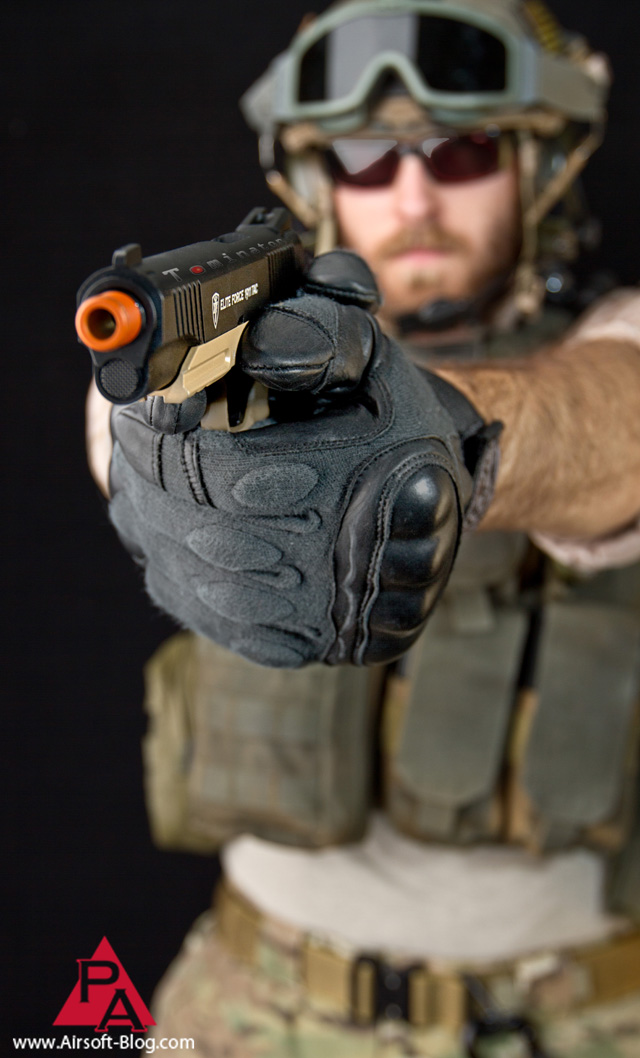 Elite Force partnered, again, with KWC to make their 1911 A1 Tac CO2 Airsoft Pistol.  To be honest, I have never gotten too excited when I hear the name KWC when it comes to Airsoft guns, but almost instantly from the moment I fired the first shot from this CO2 airsoft pistol, I realized that I will probably think differently in the future.  This could very well be the hardest kicking Airsoft pistol that I've ever fired.  Granted, CO2 generally have more recoil, but even among other CO2 pistols that I've tested, this one seems to have a noticeable increase.  Very fun. 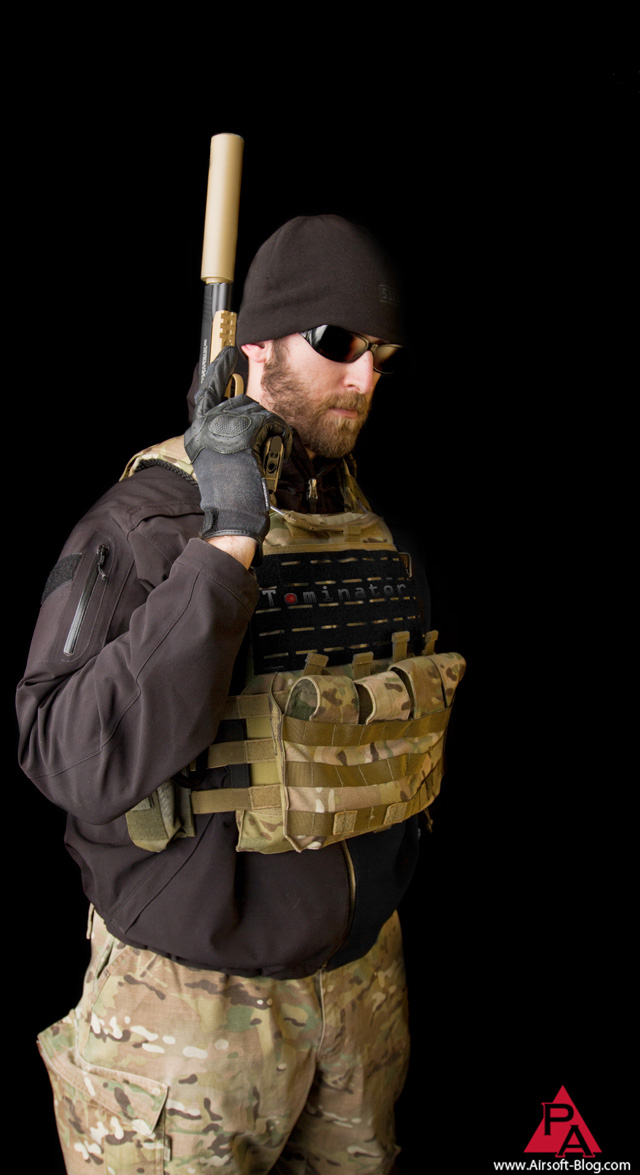 Another characteristic I noticed as soon as I pulled the gun from its box is that this ain't no cheap China pot metal slide & frame setup.  The Elite Force 1911 A1 TAC has some serious mass to it.  In fact, it weighs in at around 2lbs.  One can assume this was probably a good idea considering the amount of recoil the gun has.  Suffice to say, I believe this gun has the external reinforcements necessary for a hard-hitting CO2 pistol.  Unfortunately, I cannot comment on the durability of the internal parts, since I have not had the gun long enough to really put it through its paces.  However, if the externals are any indication, I'd say there is not much to worry about in regards to the internals.  PLUS, as a safe guard, in the event the internal parts DO end up failing me (or other end users), Elite Force has an industry-leading warranty to cover performance failures like that (provided you haven't done anything to the gun to void the warranty, of course). 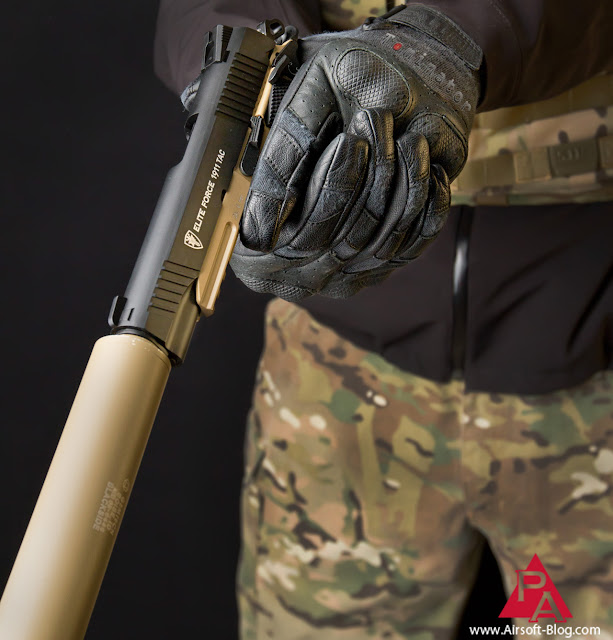 I should point out that while I'm sure you've noticed that I've added a Gemtech Blackside mock suppressor from Madbull, it's just for looks, as it is too heavy for the slide to cycle.  Also, I don't advocate the removal of the federally mandated orange tips when transporting your Airsoft replicas to and from the field.

So let's talk about performance and a few of the other features of the Elite Force 1911 A1 TAC CO2 Airsoft pistol.

First, I'd like to address the fact that this is one of the first Airsoft 1911 pistols where the beaver tail grip safety ACTUALLY functions as intended.  Consistently.  If your hand is not squeezing down on it while you attempt to pull the trigger, the gun will not fire.  IMPORTANT DISCLAIMER: This does not mean you should violate the fundamental commandments of gun safety and point the gun at anything you don't want to be destroyed while you're testing the functionality of your own gun's grip safety.  That's just asking for trouble. 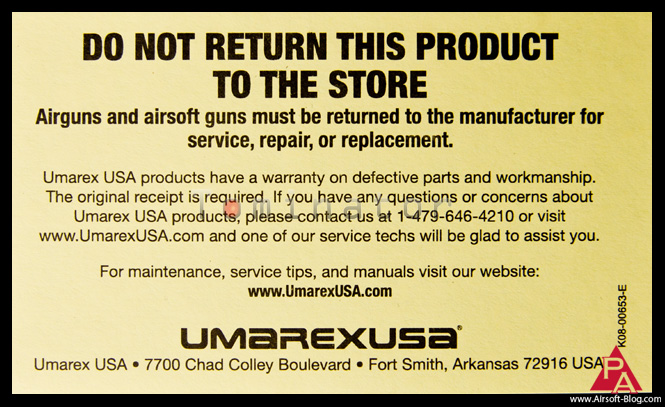 A beaver tail safety switch that ACTUALLY functions as intended!!! 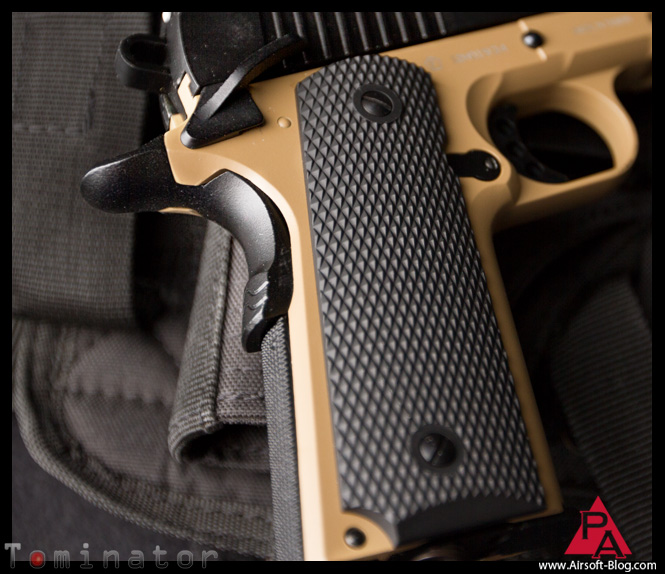 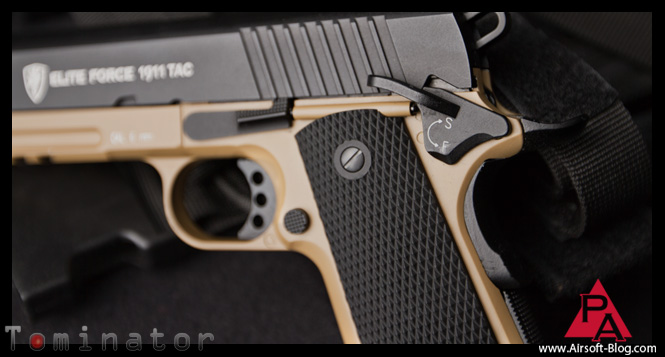 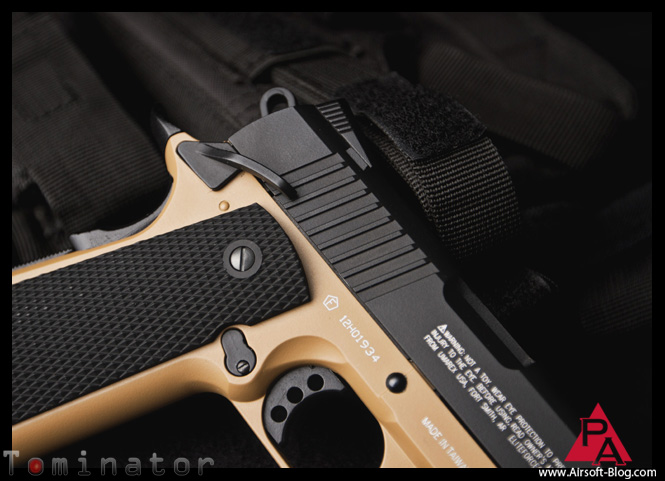 Another improvement the Elite Force 1911 TAC has over other Airsoft 1911s, like the WEs for example, is the lack of wobble on the right-side thumb safety switch.  Not only does it feel sturdy and solid, but it does not feel like that side of the safety switch is just going to fall off or out of the gun like pretty much every WE (and one or two Maruis) have done to me. 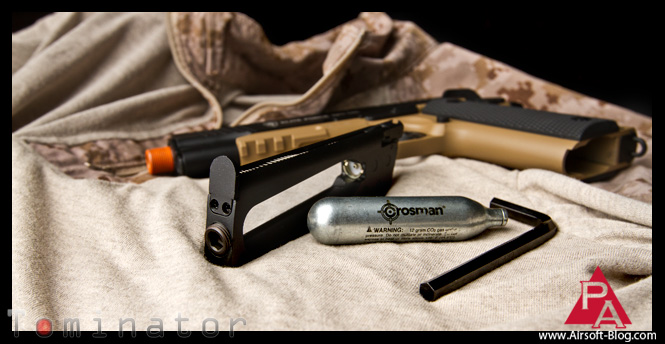 Elite Force BBs were used during performance testing, in case you were dying to know. 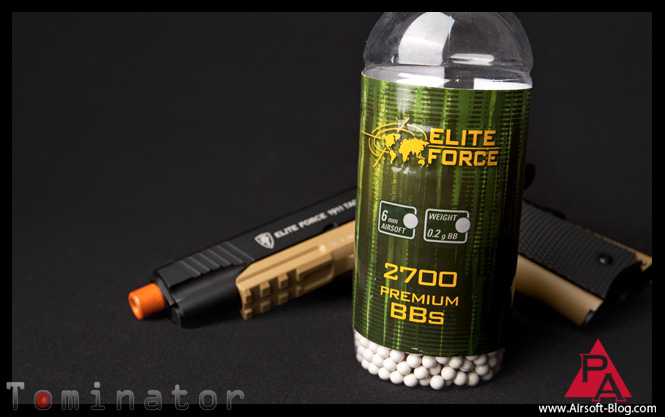 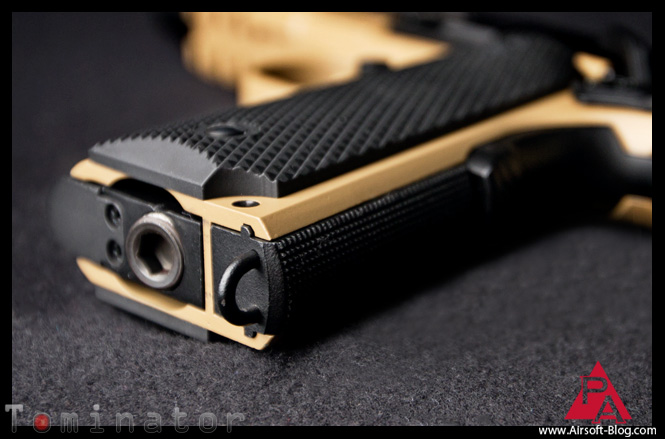 Above, you can see that the Elite Force 1911 A1 TAC comes with a very convenient retention loop, for attaching pistol lanyards to effectively tether your gun to your person, preventing loss and/or damage from hitting the ground. 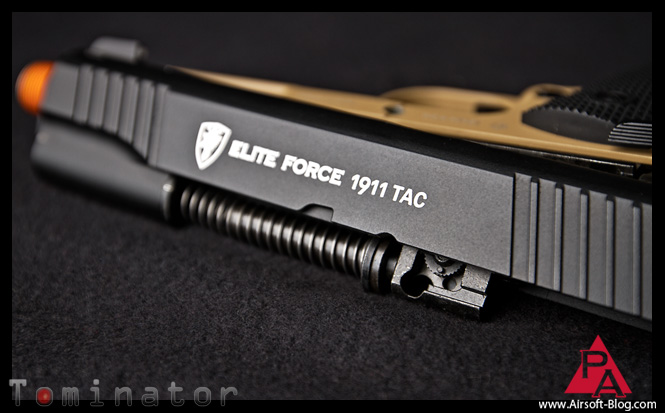 Adjustable hop-up (it's the little wheel with the small dot at the bottom, you nooby). 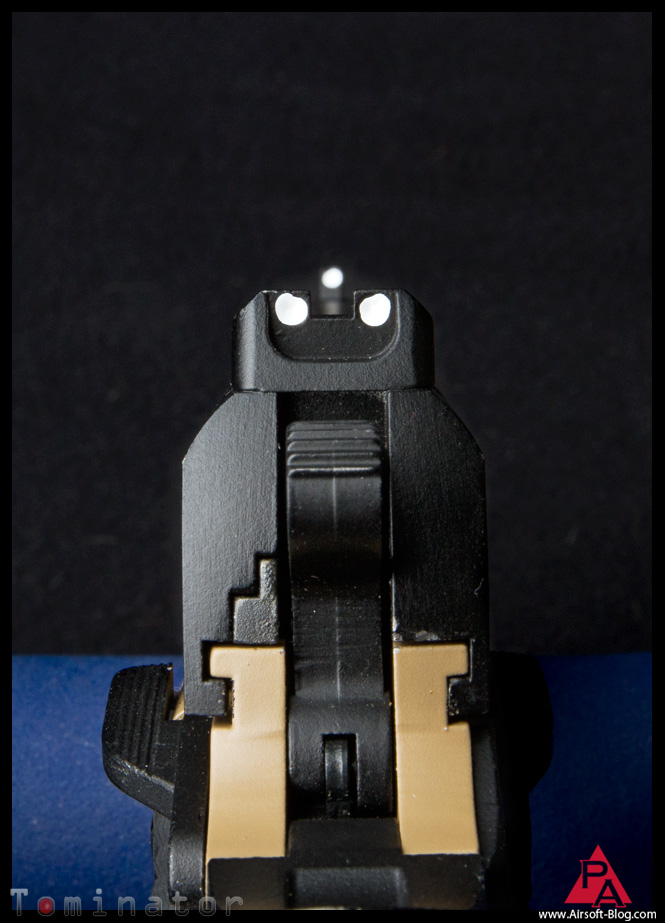 Sight picture.  I definitely appreciate the white dots.  Really helps in quickly acquiring one's target.  And no, I don't care that the dots are not perfect circles. 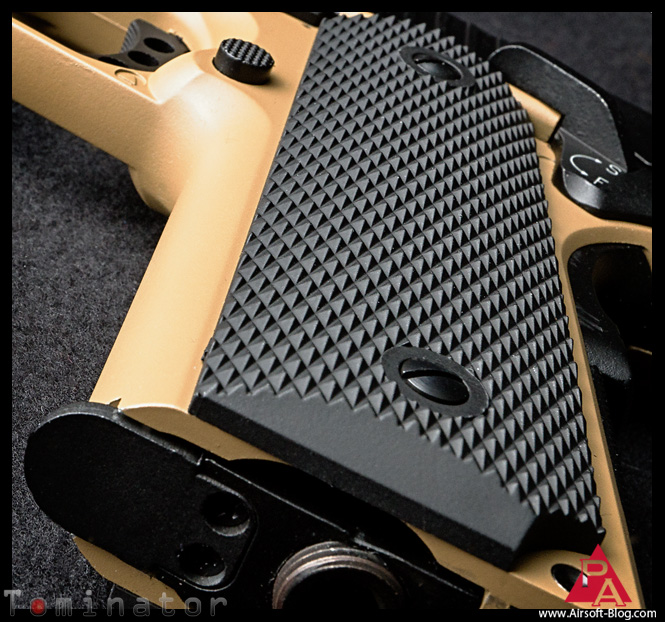 There is almost zero relevancy to the shot above.  We've all seen this style of 1911 grip panel, but I included it because why not?  You Only Live Once.


Cons:
Conclusion:
The Elite Force 1911 A1 TAC should ONLY be purchased if you want an affordable, high quality Airsoft pistol with a heavy blowback recoil sensation, consistent accuracy, sex appeal and, of course, all backed by a 60-day warranty.  If you're not looking for something along those lines of winning, STAY AWAY!  Buy something that sucks instead.


It's that special time again.
Time to submit nominations for the 3rd Annual Popular Airsoft Players' Choice Awards.  I'd be lying if I said I wouldn't appreciate not only your nominations for the "Best Airsoft Blog" category, but also, if nominated, your votes to win in that category.