I'ma be real witchu: this entry on the Pyramyd Airsoft Blog is merely to show you naughty Airsoft helmet photos and to tell you about Pyramyd Air's 12 Airsoft Deals of Christmas (2 are already available as I type this). 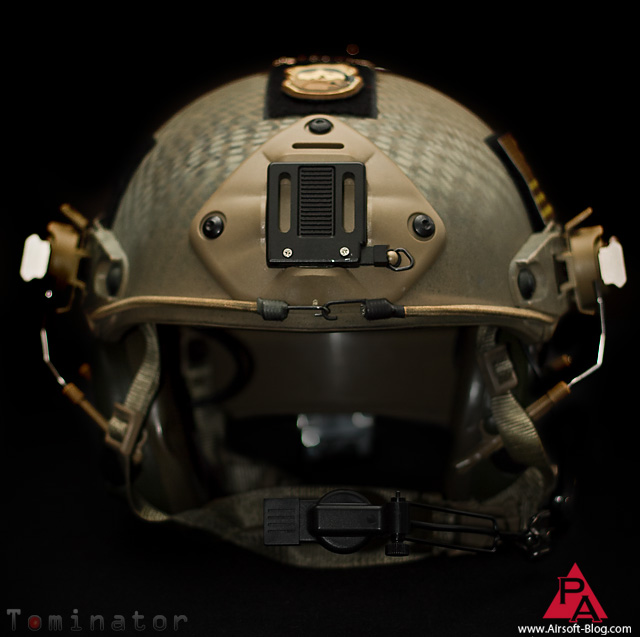 While I'm being honest, I will tell you that I am merely an amateur when it comes to pimping one's airsoft helmet.  There are many an experienced MilSim player out there who can (and probably will) pick apart this setup for one reason or another.  BUT, that doesn't mean it's not fun to look at.  Haters gone hate.
After the jump, I'll tell you all about the particulars of my Airsoft helmet, and I will reveal the 2nd of the 12 Airsoft Deals of Christmas.

First & Foremost: My 'Merica IR Patch.  It's probably not actually IR, but it looks cool.  You'll also notice that I've installed the ARC rail adapters for my Comtacs (headset).  I will warn you, the adapters are too small for the ARC rails themselves, so they pop off pretty easily.  Guess that's what happens when you buy knock-off stuff.  It's fixable, but haven't gotten around to dedicating time to devise a solution and implement. 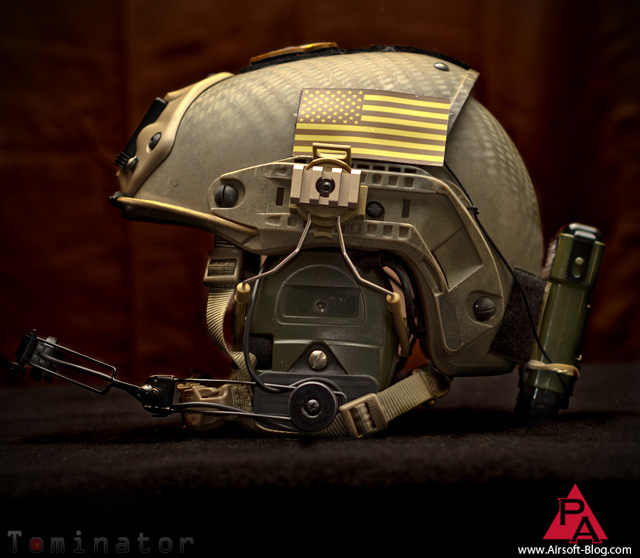 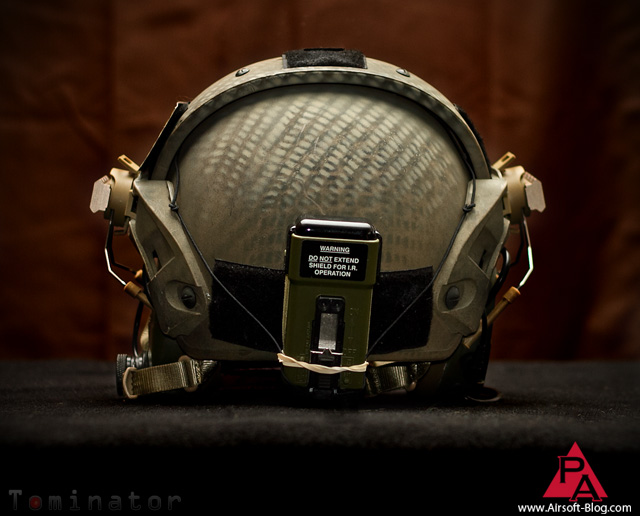 Ah yes, that thingy on the back of the helmet, which, if you're a gear enthusiast and especially if you're a gear whore, you'll know that it's a distress marker (functional) that flashes a light & stuff for when you need to be found by "hopter copters" to exfil you out of a hot LZ.  Or at least that's what I learned from Call of Duty.  Smart people will know that I just made a joke.  Stupid people will think that I get all my guns & gear knowledge from that video game (I've never actually played it).

Notice that I've dummy tied my distress marker to the rail loop attachment points in case my homemade Velcro job fails me.  Can't be too careful.

Here's the right side of the helmet, with some empty real estate for a well-deserving patch.  I'm having commitment issues at the moment, so the decision as to what patch will go there is TBD. 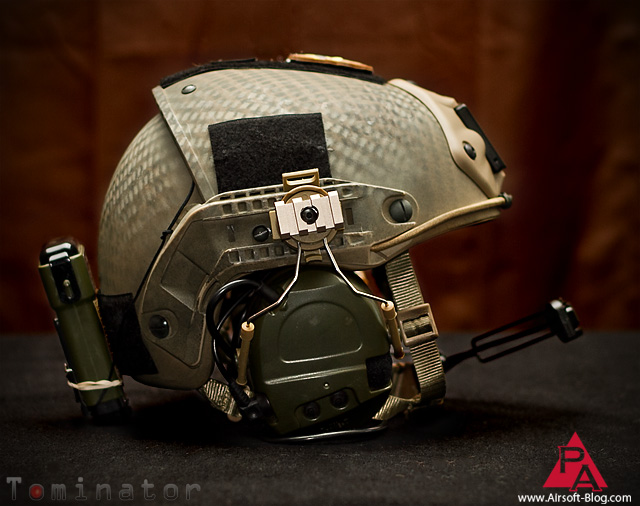 While I'm sure the members of the Gear Whores Anonymous community would cringe at this, I've added their trademark patch on there for funsies, even though pretty much everything on this helmet is a knock-off.  That black square, just behind the GWA patch, is actually an IR reflective patch which I spray painted black because I saw somebody cool do it once.  Not sure if it still functions as intended with that paint over it because I lack the necessary image intensifiers or night vision optics necessary to determine it so or not. 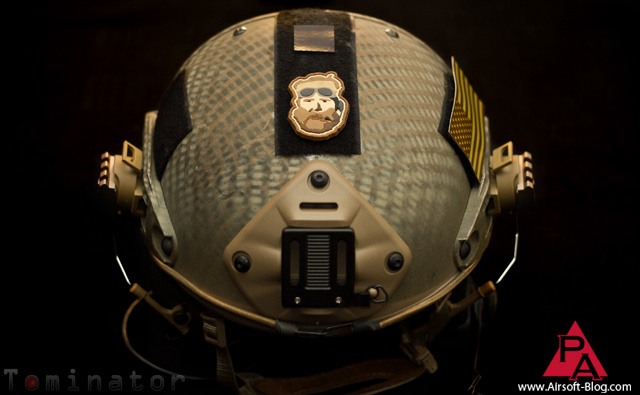 Since this helmet was made in China, by the notorious Chinamen of China, naturally, it was designed with a smaller human head in mind.  They probably hadn't anticipated some 6 foot, 6 inch bald Airsoft blogger with a large circumference around his head wanting to wear their helmet.  So I had to modify the innards of this brain bucket to accommodate my enlarged cranium.  That process pretty much entailed simply removing most of the padding inside the helmet (I don't wear it to protect me from serious concussive injury anyway).  I added that large pad in the center once I got everything else squared away... 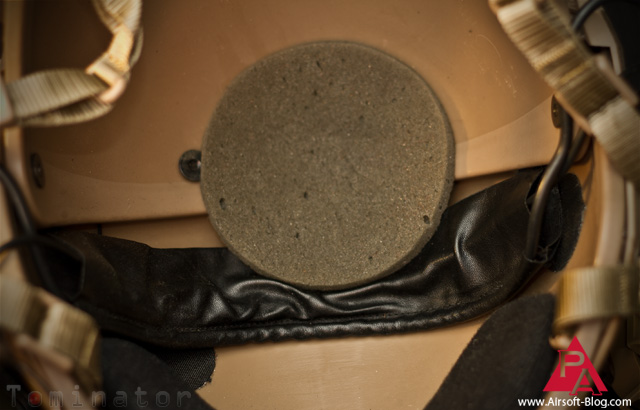 Namely, the matter of figuring out to do with the headband thingy from the Comtacs, which assisted with keeping the wires under control.  When I first tried getting that strap to sit inside the helmet all nice and neat, I soon realized that it was going to be a pain in the buttocks just trying to get the helmet on with all that crap hanging off the sides & stuff and then to add the hassle of keeping that headband thing under control and out of the way?  Not only no, but heck no!  SOOO, in the image below, you will see that I took the liberty of adding some loop-side Velcro to the ends of the headband.  Those black circles, now visible within the interior of the helmet are actually sticky on one side, Velcro hooky on the other. 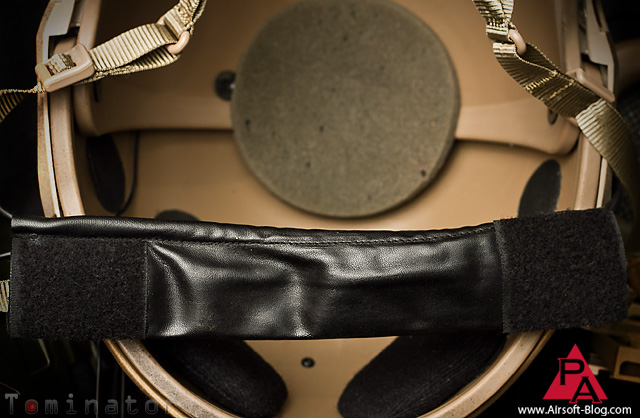 With that headband Velcro'd into place, I am now good to go for tactical sexiness.

And lastly, but mos' def not leastly, it's that highly coveted time of year again.  No, not Christmas, Kwanza, Hanukkah or any other religious holiday around this time of year.  It's time to rise up and nominate the Pyramyd Airsoft Blog for the "Best Airsoft Blog" category of the 2012 Players' Choice Awards hosted by PopularAirsoft.com.  To nominate me, if you would be so kind as to click this lil' linky and drop my name in their hat like a big dog.