It seems like each year, a story breaks of someone getting their stuff jacked from the floor of Shot Show.  Last year, I suppose the biggest story was probably the Crye Precision prototype jacket that got stolen from their booth.  Well, this year, Elite Force has either decided to produce a new variation of the HK416 or they have become the victim of a most heinous crime.

See what happened after the jump...

This photo is either the introduction of a new Elite Force HK416MP (Machine Pistol), or it appears that someone has straight jacked the signature HK416-style crane stock from this floor model at the Elite Force UMAREX booth. 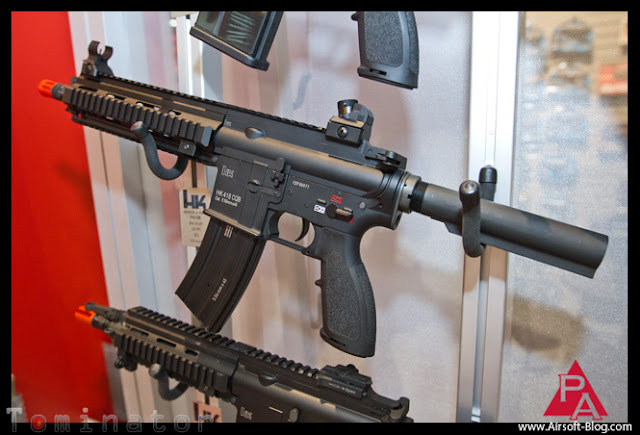 You'll also notice that the PEQ box on the HK416C, just below the HK416 CQB/MP, has also gone missing (and I don't think it's because they figured out a way to put a battery inside the rail or elsewhere inside the gun).  So it looks like someone that shouldn't have, went home with a new HK416 crane stock and battery PEQ box.  For shame, Shot Show attendees.  For shame.

Elite Force has launched an internal investigation into its booth security personnel for bribery and negligence*.  Elite Force Sales Manager, Cliffton "Papa Bear" Eisenbarger could not be reached for comment because he was busy grooming his Amish-style beard, and Andy Green simply told me to "come at him," which is pretty much his standard response when he is upset and wants to lash out at me.

If you have any information on the whereabouts of these missing parts or have knowledge of the identity(s) of the criminals responsible, you can make an anonymous tip by contacting the Elite Force Crimestoppers Hotline.**